Big Bash Boom is looking to capitalise on the success of Australia’s premier T20 tournament, and follow Pokemon Let’s Go as a more accessible console game that acts as a gateway for the legion of players of the popular mobile game. It offers the same modes as last year’s free-to-play app, with the addition of an online option, and gameplay that falls somewhere between tap to hit and the more in-depth Don Bradman / Ashes Cricket series it’s built upon. But unlike Pokemon, it seriously lacks staying power.

There’s certainly a market for an arcade style cricket game, and this is actually Big Ant’s second crack at it, following 2015’s Tabletop Cricket. Whereas DBC/Ashes Cricket have purposeful steep learning curves that force you to earn runs and toil away for wickets, Big Bash Boom wants to be fast and intuitive to pick up and play. Grab a few beers (or cordials), put it on the easy difficulty, and pass the controller around during a BBL08 innings break to experience the best Big Bash Boom has to offer across a couple of Five5 matches. Once everyone has a feel for the controls, the medium difficulty offers a greater balance between bat and ball.

Big Bash Boom is simpler across all fronts. While batting, the left stick controls shot direction and the face buttons command a lofted, aggressive, defensive or advancing (down the wicket) shot. While the controls are simplified, so is your command over shot selection. Lofted smack is old reliable, while the aggressive option feels as if it’s intentionally trying to bring the bowlers back into the game, as there’s no guarantee the ball will be hit along the ground; there’s actually no designated ground shot option, so you might as well take the lofted risk for potential greater reward. 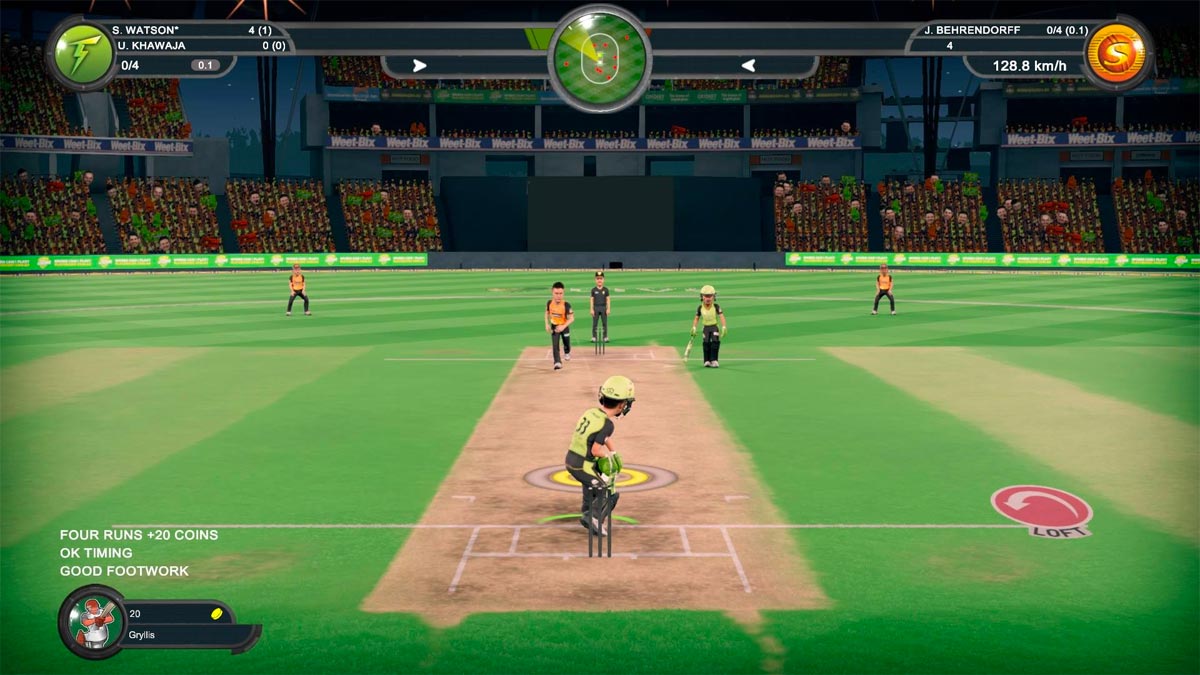 Batting’s biggest feeble is the inaccurate pitch markers and awkward camera. The bowler’s line and length is represented by a circle, and is imperative in selecting your batter’s position, footwork and shot direction; it is fine in theory, but often the ball will land outside of the circle, which sees the batsman play in the wrong direction. Perhaps that’s intentional to include an element of the bowler bamboozling the batsman, but I suspect not. The camera’s fixed position well behind the batter often blocks the pitch marker, which also shows spin or swing direction, which makes playing spinners especially difficult. It won’t be long before you are smacking almost every ball for six in single-player, but against more crafty human opponents you need to know roughly where the ball will land to be able to play a shot within the confines of this simplistic approach.

Bowling also tightens things up. The left stick controls line and length, while the face buttons select the type of delivery, depending on the bowler, matched to a colour-coded timing bar that determines the quality of the ball. Adam Zampa and Rashid Khan rip through some devastating leg spin — and the lack of pace from spinners throws off your timing, making them much harder so face — while the fast bowlers are easier to dispatch to the rope.

Bowling is a bit of a double edged sword. I’ve enjoyed it more than in the cricket sims, but have already figured out how to cheat against the normal AI. They struggle to hit slower ball bouncers, or spin bowlers at all, which are also tough for human opponents. 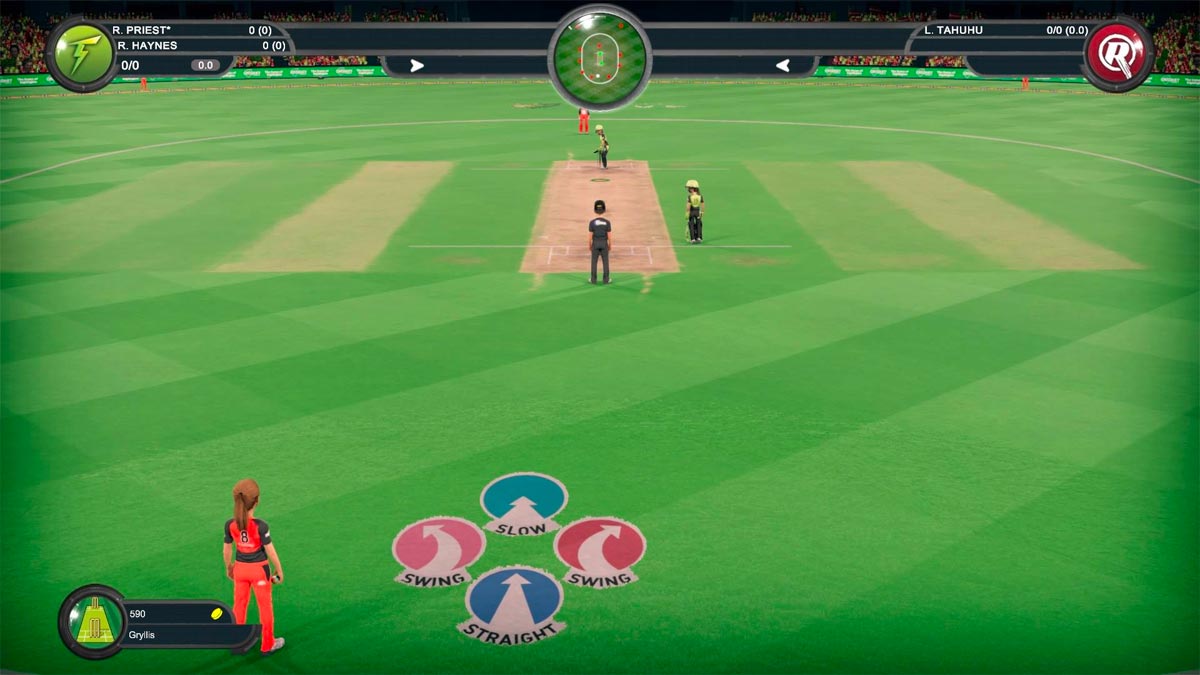 Do you want to play somewhat realistically and bowl a mix of balls, or seeing how this is an exaggerated arcade affair anyhow, embrace the quirks and exclusively bowl slow bouncers and part-time spinners to bowl your way to victory? Well, I say “bouncers”, but they don’t actually exist in Big Bash Boom; the ball never bounces above chest height. Alternatively, the bowling innings can be simulated, but it scales if you have already set a first innings total — after 3/94 in a five5 the AI scored 0/90 (normal), and all out for 386 (easy) in a T20, the opposition scored 2/360.

The audio design is vastly improved compared to previous efforts, as the full licensing allows proper commentary including player names from some bloke I’ve never heard of by the name of Pete Lazer. Still, while it’s much better than robotic Michael Slater’s rambling, it won’t be long before you disable the chatter. There are only so many times you can listen to the same “he Smarshed it” jokes, and all players are referred to as “they” to allow the same lines in the BBL and WBBL, which ruins the illusion. While the soundtrack is limited, the tracks blasted between boundaries are quickly forgettable — exactly as they should be. They add to the moment as the umpire signals four runs, but fade into the background soon enough to hide their constant repetition.

The highlight of the arcade style, emulating NBA Jam, NBA Playgrounds and FIFA Street, is the quality of the motion capture applied to the big heads. The instantly recognisable caricature likenesses all look great and are the best I’ve seen in any licensed Australian sports game. I’m excited to see their more lifelike renditions if there’s an official follow up for the 2019 Ashes. Likewise the stadiums are true to form, while the crowds look better than they have in the past, at least from a distance. 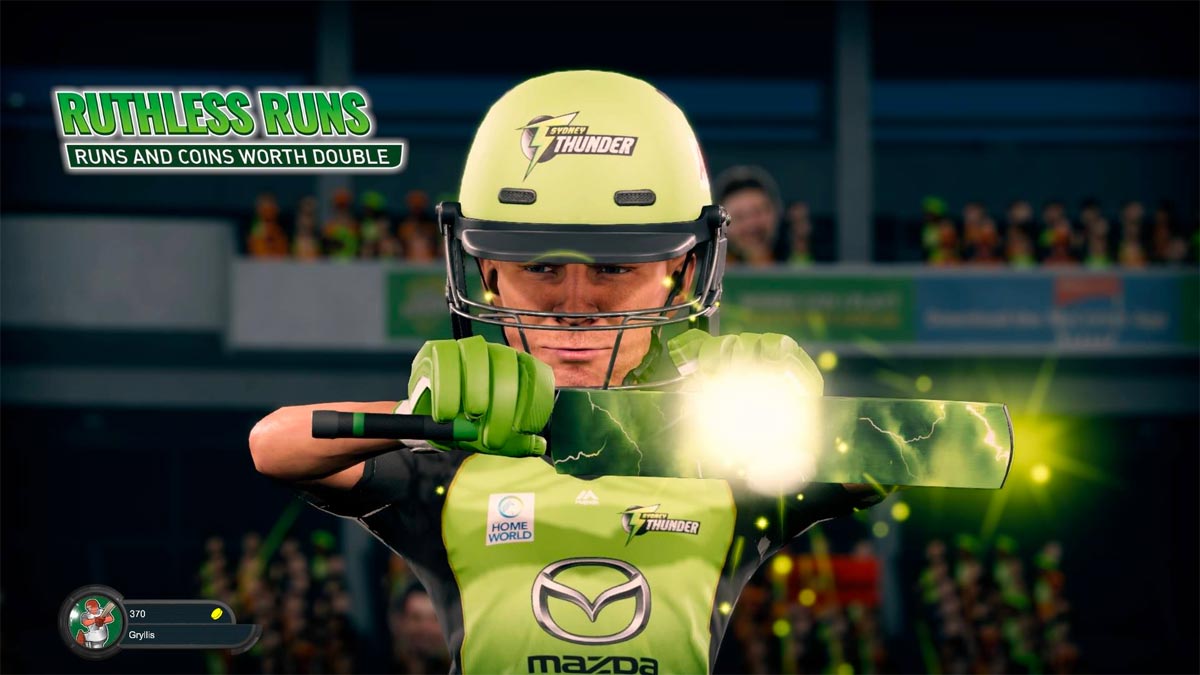 It’s when motion is applied to the players and the ball that the visuals come crashing back down to Earth. Movement is still riddled with glitches, as players teleport into position, and often misfield the ball, only to have it magically appear back in their hand to force a runout — never run on a misfield in Big Bash Boom. There are issues with a player clearly in his crease being runout, spin bowlers being called for waist-high no balls that bounced, fielders catching a ball standing over the rope, and manually changing the field only to have it change back the next ball. While it’s more polished at launch than the Don Bradman series, Big Bash is rough around the edges. We have primarily been playing on PlayStation 4, not because we didn’t want to play on Switch, but because we can’t. That version should be avoided at all costs, as it’s technical mess and at this stage is unplayable. To its credit, Big Ant has acknowledged the poor performance and promised to fix it, but for now it should be avoided.

Instead of building an innings and playing quality cricket shots, Big Bash wants you to go boom to earn coins to unlock novelty helmets and silly hats; it’s a far cry from the profound customisation of Big Ant’s previous cricket games, likely mandated by the full player licensing. In-game temporary power-ups are more immediate awards, including allowing the batsman to score double runs, the bowler to deliver the ball at blistering speed or fielders to spring into the sky to catch the uncatchable.

These are novel in the short term, but are regurgitated too often across the single-player tournament when played at the full 20 overs per match (there are also 5 and 10 over alternatives). There’s also no option to store a power-up, as they disappear if not used within a couple of balls, or see what it is, and they are not always beneficial in every circumstance. As a batter, I want to keep “harder catches” in my pocket if the final over is approaching. As a spin bowler, I don’t want to use “extra speed” as it makes the ball easier to hit, but I would elect to use “batters can’t run”. The flashy sixes and frequent power-ups may appeal to casual players and young kids, but don’t offer much for experienced players.

After spending hundreds of hours across Don Bradman 14, 17, and Ashes Cricket, I was surprised how quickly I adapted to the control scheme, despite ingrained muscle memory wanting to use the right control stick to direct the ball. However, hitting shots in Big Bash Boom feels empty by comparison. The result is more premeditated, as the ball glows long before it sails over the rope confirming it will go for six with no chance of a catch; and the camera only pans to show an AI fielder chasing a ball if he will collect it, signalling it definitely won’t go for four the second it leaves the bat — the stagnant camera movement in general could use an overhaul. The natural player movement and precise control over shot placement I praised in Ashes Cricket have both been rolled back, and then some. Debatably that’s part of why it’s easier to pick up and play, but it’s a big contributor to putting down the controller much sooner. 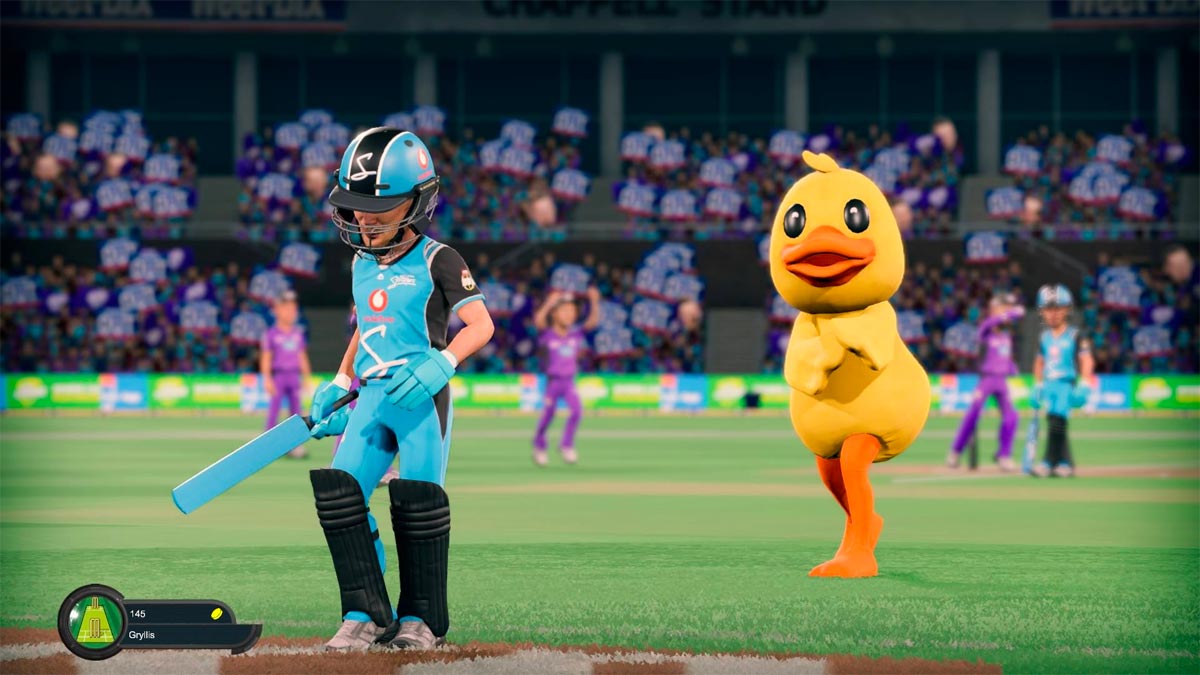 Surprisingly there are no replays and only basic stats, I assume in an effort to speed up play; but there is a laggy BBL logo displayed before every ball, which defeats the purpose, along with quirky celebrations that you’ll soon abandon; skippable replays would have kept the game moving at a similar pace and been a whole lot more useful. As it stands, you’ll be mashing X/A intrinsically to try and skip the horrible BBL logo anyway.

Big Bash Boom is lacking content in stark contrast to the abundance of options in its simulation counterparts. There’s the 2018/19 BBL and WBBL, casual matches and a theoretical online mode — but we haven’t been able to find a single match during launch weekend, so must conclude that online play isn’t actually an option. Considering the mobile game is free, and essentially offers the same content, the $90 price tag is baffling. The BBL and WBBL only offer a couple of hours of content combined, and there’s little incentive to replay them for more funny hats, especially with the restrictive shot selection and predicable outcomes. Couch co-op, the best way to play, is inherently a brief experience, and chances are those with mates to play online with are cricket fanatics who prefer DBC/Ashes Cricket’s deeper experience.

Despite its flaws, Big Bash Boom would have made a great stocking filler at $30 for a basic hit and giggle. At $90, I can’t see many taking the plunge. Those willing to invest serious time in a cricket game will get a lot more out of Ashes Cricket, which can be had for a quarter of the price. BBL fans looking for a quick fix will stick with the free mobile game. While there should have been a place for Big Bash Boom between the two, it’s priced itself out of contention.

There’s some quick fun to be had here, but if you want meaningful cricket on consoles, stick with Ashes Cricket.