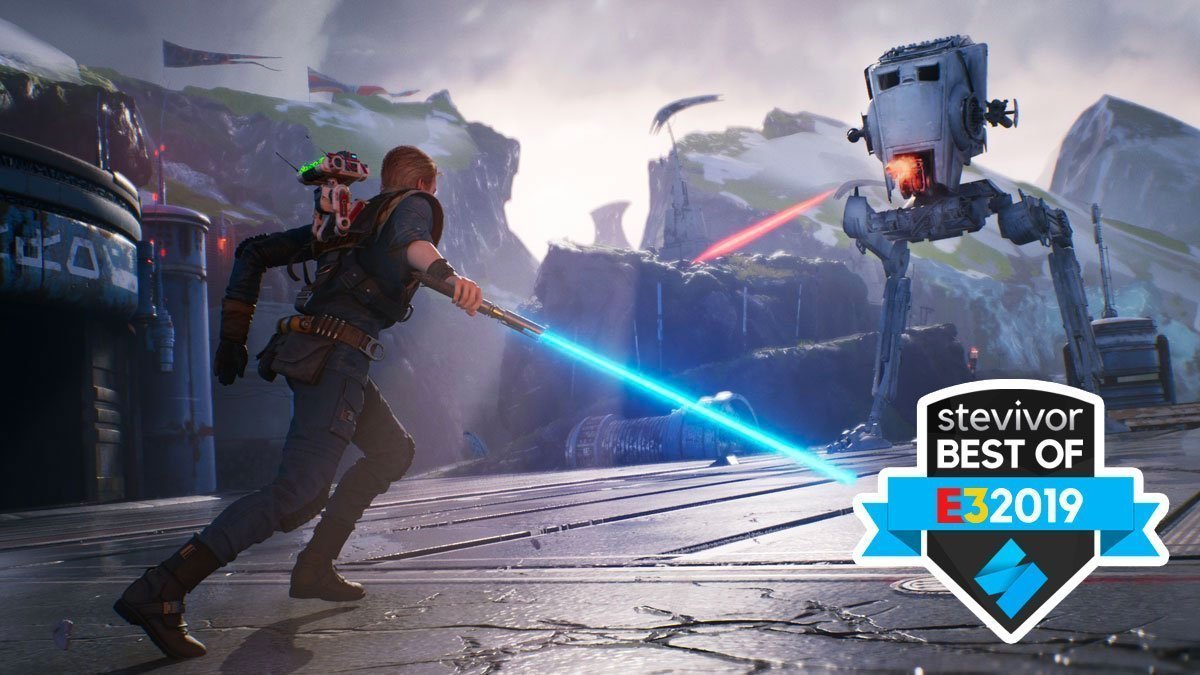 Our hands-on demo was much better than the EA Play livestream.

Star Wars Jedi: Fallen Order feels amazing to play. Not only was the extended hands-on demo at E3 considerably more impressive than what was shown during the EA Play livestream, Jedi: Fallen Order is a game you have to play to fully appreciate.

I understand the chorus of underwhelmed sighs that reverberated around Twitter when EA and Respawn revealed our first proper look at gameplay to launch EA Play. What it showed suggested a B-grade lightsaber slasher, covered by a dated Star Wars skin, and the charms of Forest Whitaker.

The game I played was nothing like that. Star Wars Jedi: Fallen Order is an engaging action game, underpinned by deep and challenging combat, Titanfall-esque traversal of branching paths, and the charms of Forest Whitaker.

The lightsaber and Force combat harks back to The Force Unleashed. Before jumping into the demo, I dabbled with Cal Kestis’ burgeoning powers in a combat simulator against a raft of enemies. They range from the usual ‘saber fodder stormtroopers, to a variety of increasingly difficult guards. Can’t say I’m a fan of the native giant spiders, but at least they love killing stormtroopers too.

Lightsaber attacks are mapped to a single button, but Cal’s exact moves will depend on timing, the enemy’s response and successfully chaining together a combo of strikes. The trooper who proclaimed having trained to fight a Jedi in the reveal stream proved a genuine threat when I fought him one-on-one, blocking attacks and countering moves. However, when I snuck up on the same enemy unaware during the demo, Cal quickly dashed towards and impaled him with a swift strike; he went down faster than a careless Qui-Gon Jinn. Context is key.

Despite boasting the cocky attitude of an all powerful Jedi, Cal is actually a Padawan in training, or at least he was before that nasty Order 66 business. As such, combat against multiple opponents is quite challenging, and can become overwhelming. Your buddy backpack droid, BD-1, can be called into the fight to heal Cal, and if you don’t master blocking, parrying and evading, expect to become desperately reliant on his services.

Holding the left bumper raises Cal’s lightsaber into a defensive stance. It’s a safe guard when he needs to regroup, but can only take a few consecutive hits before he tires and lowers his defences. Timing the same button parries both range and melee attacks, and is the trigger for some of Cal’s most aesthetic moves. With a perfect parry, he’ll spin around enemies and slice them in the back or deflect blaster fire back at a minion stormtrooper for an instant kill — holding block merely deflects the fire.

The Force abilities are mapped to the other three shoulder buttons: Force push, pull and slowdown. You know what all of these do, powered by a Force meter replenished by killing enemies. I saw a glimpse of a fairly expansive skill tree, although wasn’t permitted by my EA minder to poke around in there, but it looks like Cal’s abilities will grow considerably as the game progresses. Presumably, enemies who can withstand a Force push early in the game will be annihilated during later sequences.

The wall-running, vine-swinging, platform-hoping, double-jumping and AT-AT climbing reflect their origins from Titanfall 2’s campaign, with a little inspiration from Tomb Raider. Much like the combat, these exploration and platforming segments require precise timing and can incorporate the Force. Pushing open a door and pulling a vine into reach are fairly obvious, but they fit into the world really well. It’s Force slowdown that could become the most intriguing, from an exploration point of view. I went the wrong way during part of the demo, and slowed a couple of moving platforms to make double jumps that otherwise wouldn’t have been possible. I was quickly redirected, but the suggestion was there will be some optional areas that are harder to reach.

It’s this level design that we need to see more of, along with Cal’s growing powers. The standard “Metroidvania” branching pathways comparison was the word around E3, but we didn’t really get to see that, aside from the afore mentioned area I wasn’t meant to venture towards. There will be some backtracking as Cal and BD-1 acquire new abilities, but we need to see more to understand how much influence this really has on gameplay.

The other missing element is the story. Cal and BD-1 have their charms, but at the moment they haven’t done anything to ascend to an echelon beyond generic, forgettable Star Wars protagonist. Don’t get me wrong, I don’t mean to suggest I don’t like the duo. We just haven’t see enough of our hero team to be intrigued by the story yet. At the moment, we have a Star Wars game built around combat gameplay, which may or may not have a compelling narrative.

Star Wars Jedi: Fallen Order was one of the most entertaining games I played at E3 2019. The combat felt great and provided a genuine challenge, and it seems like there will be an interesting world to explore, unlocked as Cal realises his true potential. There are still some questions that need answers, but after waiting far too long for a (non-Lego) single-player Star Wars game in the Disney era, Respawn has shown something that needs to be played to truly understand.

Star Wars Jedi: Fallen Order will head to Windows PC, Xbox One and PS4 on 15 November.