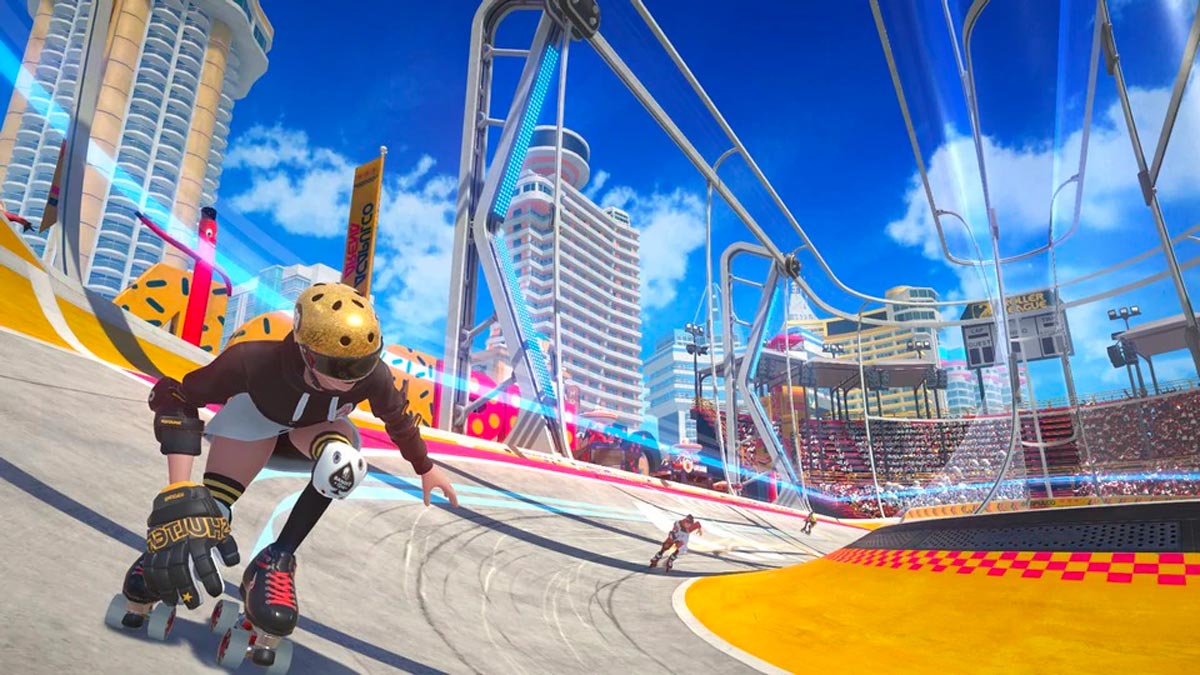 Everyone wants the glory.

Roller Champions is rolling with a good idea at the moment. Matches are short, the objective is clear, and it only takes one practice match to pick-up the core strategies. A free-to-play roller derby inspired 3v3 sports game, the easiest way to understand Roller Champions is to play a couple of rounds — and until 11pm AEST on 14 June, you can do exactly that from the comfort of your own home. Regardless of where it goes from here, it will always be known as one of the first E3 demos you didn’t need to be at E3 to play.

The premise is pretty simple: two teams of three compete to get the ball and race to five goals. To activate the goal, you must complete at least one lap of the arena, in the correct direction, without conceding possession. If you’re daring enough to gamble on making it around multiple times, completing two laps before putting the ball through the hoop will score three goals, and three laps gives you a victorious five. It’s the Golden Snitch play.

During my first game, I scored a last minute equaliser by luck. It wasn’t until my third match — and games only last a few minutes — that I realised the shoot button, LB on an Xbox controller on PC, needs to be held down to aim at goal. In the interim, my teammates were equally as perplexed, and while clearly dominating our opponents, we missed several gimme shots at goal. However, so long as you reclaim the ball without the opposition touching it, the lap count continues, and that’s how we scored a five pointer that must have been soul-destroying for our opposition, who had led 1-0 and worked tirelessly for that solitary goal.

Having two teammates you can rely upon is key. The thrill of scoring means everyone wants the glory of putting the ball through the hoop, despite a pass to an open teammate being the better option. The player in possession of the ball can’t gain speed as easily, so moves slightly slower than the other five players, affording them an opportunity to make ground. While there is a dodge button to counter tackles, it’s much more effective if your teammates block (and tackle) opponents to clear a path for the player with the ball — before one skates ahead and gets in a better position to score.

Players will only successfully pass to a teammate who has just called for it, identified by an icon above their head. It allows both players to know where the ball is going, but they really need to be on the same page. The light-hearted abuse started flowing when players ignored calls and didn’t pass. Those who called for it while under pressure deserved just as much flack. When you are trying to be a team player, the instinct is to pass when the prompt appears; don’t call for it in a compromised position.

Coordinating a plan of attack when defending is just as important. When the opposition is passing the ball well, it can be hard to catch up before they can score. Swinging around in the opposite direction is a viable alternative, especially when forming a pincer movement, just make sure the tackle sticks or there’s going to be an embarrassingly easy goal against. That’s where the balance between the tackle and dodge mechanics will be crucial in the final game. We are still learning how to play, but I foresee players mastering dodge and effectively becoming invincible with the ball if the blend between the two isn’t perfect.

Without the ball is where I would like to see a little more action. When stuck chasing the opposition, or your teammates are hogging the ball, there’s not much you can do. This is a game about skating, scoring and smashing people into the ground. When you’re out of the direct play, only skating, there’s nothing you can do to influence proceedings or improve your standing in the match. There are obvious rewards for completing laps, tacking opponents, dodging and, of course, scoring, but nothing really for being the best skater without being involved in the scoring chain.

There’s plenty of potential in Roller Champions, and with its free-to-play status and easy to pick up gameplay, it’s going to draw a crowd come its full release in 2020. The worldwide E3 demo serves the dual purpose of giving players an early taste and allowing them to offer feedback to the development team. That part is underway. Now we just need to create a culture of team players — don’t call for the ball in a bad position!

Roller Champions is planned for a release on Windows PC in 2020. Other platforms are yet to be confirmed.