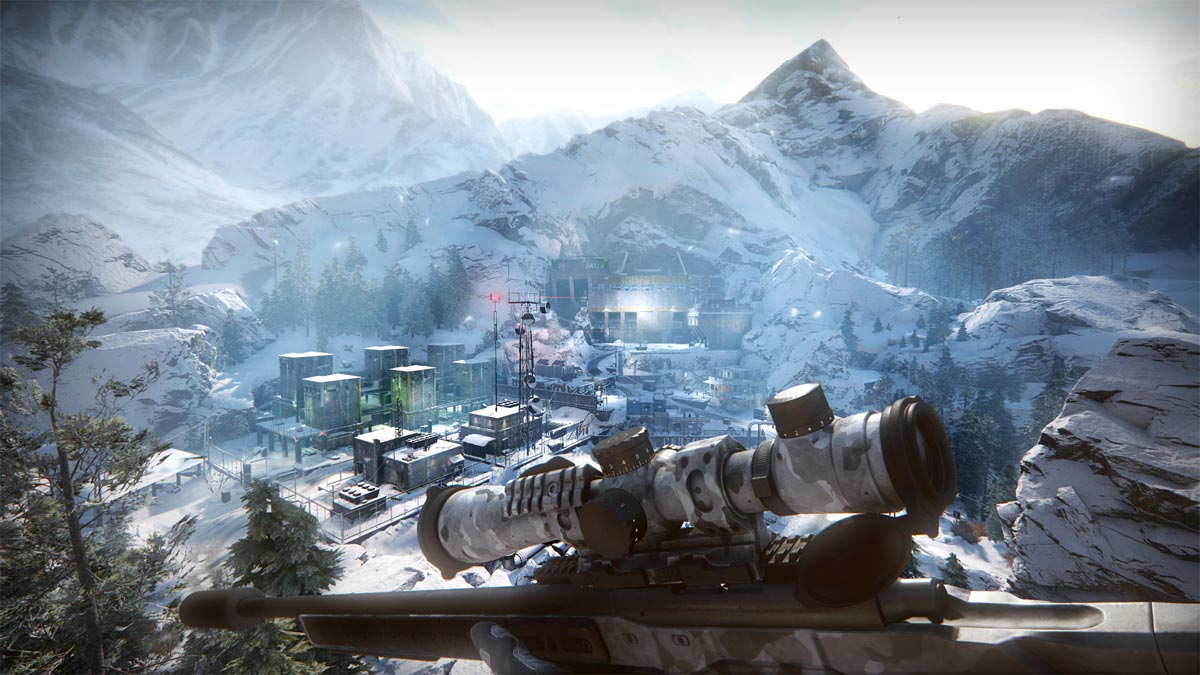 When a sniper turns hitman.

I have never gotten into the Sniper Ghost Warrior series, but with a move back to open mission environments, rather than open world, and plenty of influence from Hitman, I was intrigued to play as quasi-Agent 47 from a distance at E3 2019. We were invited into a 20 minute hands-off presentation, followed by the same mission hands-on — which I totally failed, mind you — as City Interactive demonstrated a more focused mission structure in Sniper Ghost Warrior Contracts.

The mission in question was a snow-laden compound riddled with bad guys; but after spawning on the opposite side of a mountain that offered the villain we were hired to eliminate seclusion, we would have to find it first — and by “we” I mean me; the developers fast traveled through this slow, but linear, buildup to save time.

I somewhat carefully worked myself towards the enemy camp, and stumbled into several enemies bemused by my presence en route. Like Hitman, there are several paths to take and a myriad of options available to complete the contract. Unlike Hitman, at least in this mission, there were no NPCs to blend in with and you shouldn’t get close to the target. While there are several weapons at your disposal, you are a sniper, after all.

I found myself trying to mimic the developer’s near perfect playthrough. They knew were enemies would spring up and were ready to pounce in silence, whereas I hadn’t remembered to check for landmines on a path peppered with them, and that’s where I encountered my first, very loud demise. Our sniper is equipped with a special visor that can identify mines, enemies and other immediate threats, but I simply forgot to use it.

Finding a clear vantage point to identify the target, tag enemies and plot a course of action is imperative. With a fairly good idea of where to look, having seen this mission already, I found the target without hardship. Following City Interactive’s lead, I switched ammunition to the EMP bullets and used one to disable an electrical fuse box, which in turn shutoff the cameras. This special ammo is extremely limited, with just five of each type for the entire mission, so using it carefully is a must.

Having already tagged most of the enemies, I promptly switched to the specialist tagging bullet, which identifies any goons you didn’t spot within a certain radius. It proved especially fruitful at identify enemy snipers hidden in the darkness who were hard to spot the old fashion way. We were also packing a noisy bullet designed to peak a guard’s attention and a bullet able to penetrate two enemies, giving them no chance to alert reinforcements.

With everybody tagged and their defences minimised, it was time to get trigger-happy. The two snipers were the obvious first targets, but also the furthest away, requiring precision aiming, taking into account the distance and wind. There’s an art to determining the bullet’s trajectory factoring in the conditions, and the slow motion chase cam that follows the bullet until the moment of impact is the gruesomely delightful reward. There’s no denying Sniper Ghost Warrior Contracts absolutely nails the awesome sniping gameplay.

For everyone who isn’t a military enthusiast, the game is able to do these crucial calculations for you. With this assist enabled, under the guise of a special scope, a red dot will appear next to the reticle depicting where the bullet will actually land.

Realists may cry foul, but this automated maths removes the otherwise steep barrier to entry. It opens Sniper Ghost Warrior to a new audience who want to focus on plotting a stealthy assassination, and not become bogged down in the nitty-gritty specifics of being an actual sniper.

While it’s far more accessible than previous games, Sniper Ghost Warriors Contracts feels a little unsure as to what it wants to be. Is this a dedicated, military grade sniper game or is it a choose-your-own-assassination game, à la Hitman?

If it’s the latter, and that’s the vibe I’m getting, it’s sending mixed signals by giving you options to approach targets in a number of different ways, but punishing you for not playing like a professionally trained sniper. I can see what it’s trying to do, and would like to see how it plays out in other missions, but the E3 demo suggested this is a linear sniper game, with a few extra assists for novice players, that let’s you approach targets in a number of ways, but encourages you to do it a specific way.

Sniper Ghost Warrior Contracts is heading to Windows PC, PS4 and Xbox One later this year.