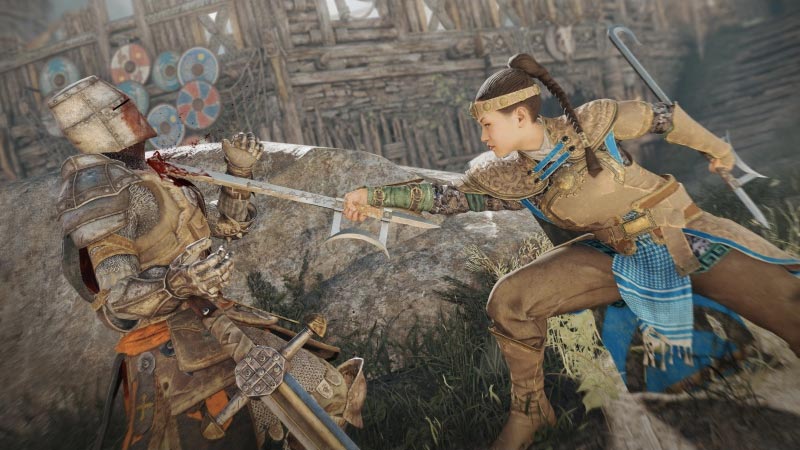 The new PvE mode that lulls into a false sense of security.

For Honor’s upcoming Marching Fire expansion marched into Gamescom with a new focus ahead of its launch in October, where a new PvE Arcade mode was made available for a hands-on first look.

Following an overview of Marching Fire’s Breach multiplayer mode at E3, we were offered the opportunity to be thrown into the deep-end with Arcade mode at Gamescom, but decided it best to paddle around in the shallows first with a handy refresher of the very unique gameplay. For Honor isn’t like riding a bike; one doesn’t simply resume where they left off eighteen months ago – you must learn to walk again.

That’s both a blessing a curse, as the precise swordplay is unrivalled by any game, but also presents a steep learning curve, even for those who have played before. Ubisoft Montreal knows that and recommended taking a comprehensive recap of the mechanics before diving into the Arcade mode that caters for all skill levels, but still requires familiarity.

Once you have a firm grasp of the controls, blocking, attacking and countering, For Honor Marching Fire’s Arcade uses not one, but two settings to scale difficulty. Set across five tiers — common, rare, heroic, epic and legendary — first choose the challenge of your opponent, and then the quality of gear.

The colour-coded settings correspond to each other – the blue rare opponents should be matched with the blue rare gear for a traditional bump in difficulty. If you want to make it even harder, try tougher opponents with less powerful equipment. If you desire tangling with a competent swordsman, but need a helping hand, trying a middle of the road challenge with top-end legendary gear. It’s a rather clever way to ensure all players are able to find the line between challenge and frustration.

Along with the manually balanced difficulty, newcomers may find the PvE Arcade mode more accessible than the punishment of encountering a more experienced PvP opponent who doesn’t allow you to find your feet.

Marching Fire’s Arcade is theoretically unlimited, as it’s a series of randomly generated challenges based on the previously mentioned difficulty settings. You will encounter a random opponent, on a random map, afflicted by random modifiers. It’s that last one that should give it some legs.

During my hands-on time, I fought an enemy who had increased stamina, while I myself had to compensate for a modifier that caused health to drain overtime, but also replenished it by landing attacks. I had to completely flip the defensive tactics For Honor is most comfortable with, and wing it as an overly aggressive player. Modifiers are both a help and a hindrance, and it’s up to you to play by their strengths and weaknesses to progress to the next wave of enemies and challenge the next boss, armed with a different series of modifications.

I enjoyed crushing menacing enemies with legendary gear, but there’s a false sense of security during a 30-minute preview that cuts to the chase with most of the good stuff already unlocked. Playing on the harder difficulties with the recommended gear rewards success with better quality unlocks.

When I attempted the medium epic challenge with the matching epic gear, I was promptly and comprehensively put in my place by AI I swear was seeking swift revenge. It was a stark reminder that while Marching Fire makes an effort to be accommodating to more skill levels, For Honor is designed to be a brutally challenging game.

For Honor Marching Fire heads to Windows PC, Xbox One and PS4 on 16 October. The base game is currently free on Xbox One as a Games with Gold title for August.

Ben Salter travelled to Cologne, Germany as a guest of Ubisoft. The arrangement does not impact our Ubisoft coverage, nor limit additional Gamescom coverage. Ubisoft covered flights, accommodation and meals.