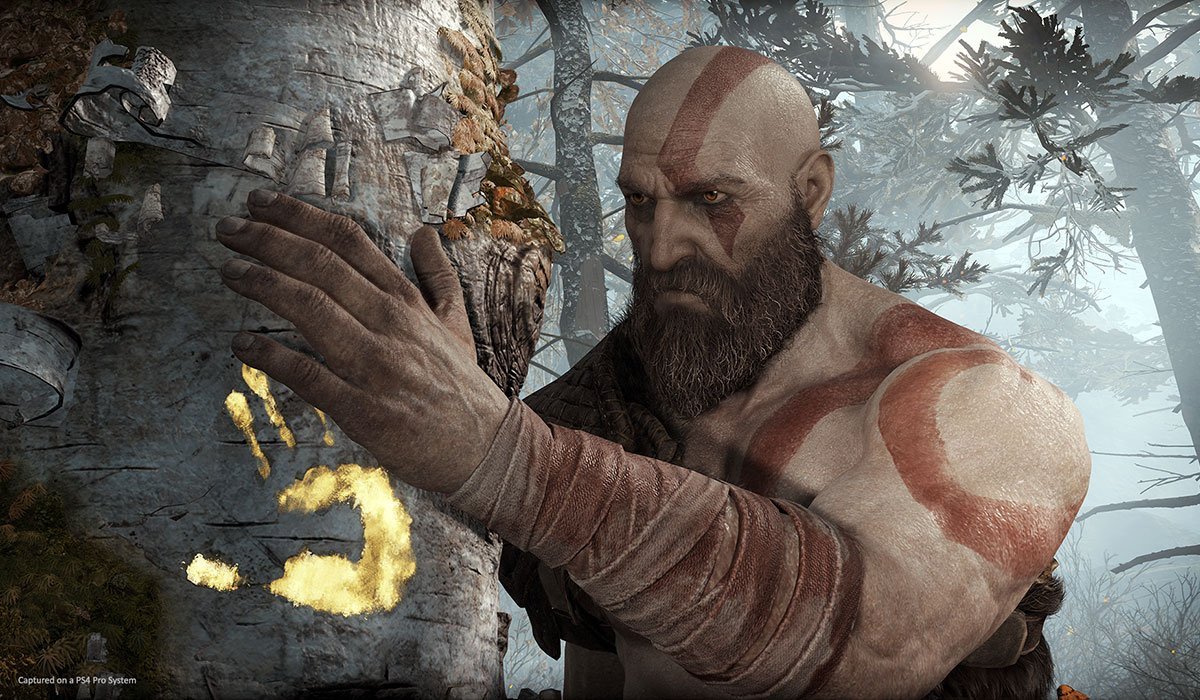 No job too big or small.

From the second you start God of War, you’re thrown into a mystery. As an embattled, bearded Kratos stares at a nearby tree, you can’t help but wonder: just what does the golden handprint placed upon its surface mean? You’re left to ponder as long as you like; you’re required to press R1 before the fabled protagonist does what he does best and chops the inanimate object down.

Despite Kratos’ grunts of effort and the visuals of his new axe biting into the tree’s massive trunk, the opening to Sony Santa Monica’s newest remains quite different than the franchise it belongs to; slow and methodical. Still, the familiar lingers — Kratos’ anger boils around the edges of the scene. This is Santa Monica’s altered direction; this is the new, mature God of War.

As Santa Monica’s Aaron Kaufman stressed to Stevivor, this Kratos – like this God of War – isn’t focused on its past, but its future. This is apparently immediately when Kratos’ son, Atreus steps into view; you don’t need to track him down. Your relationship isn’t explained. As Kaufman also explains, there are no flashback sequences in God of War. As the player, you take in the scene, process it and continue on.

I’m surprised to admit this talking about the God of War franchise, which I’ve always been able to appreciate yet wouldn’t call myself a big fan of. It’s the ultimate hack ‘n slash, a game that features what Kaufman himself described as a “one note” hero who glorified violence using well-timed quicktime events. This new iteration has none of that – QTEs are replaced by cutscenes that seamlessly insert themselves amidst a newly refined combat system. Mostly linear paths have been replaced by what Santa Monica calls a ‘wide-linear’ system, open-world enough yet not; Kaufman wouldn’t go into full details but did admit that some backtracking in the game is possible to mop up some some collectibles you may have missed along the way.

Combat can be boiled down to button-mashing on the easiest of four known difficulty levels but will mean your downfall on the rest. Kratos starts the game with a study axe, imbued with (what I’m calling) frost magic. You can attack baddies with light and heavy attacks, or best yet (and far more rewardingly) throw your axe at objects both inanimate and hostile. Slamming it into an enemy will freeze it in place, providing you a much-needed breather when engaging numerous opponents, or can set up a hand-to-hand combo instead.

As you get more comfortable with God of War’s new combat system, the more you see what it can do. I delighted in throwing my axe to freeze a single opponent, then angling myself so multiple baddies stood between us. A single tap of the triangle button makes Kratos feel like Thor; the axe flies back to his hand, ignoring anything – or anyone – that stands in his way. Combine that with Ruinic enhancements, an offensive swing of Kratos’ shield or a distracting arrow from Atreus’ bow, and you’ve got the ingredients for a varied attack.

My fears that Atreus’ would come off as a feeble child, and that God of War would be nothing more than an extended escort mission were unfounded. The boy, much like The Last of Us’ Ellie, can hold his own; he helps you in boss battles rather than serving as a liability… though I was required to revert back to a previous checkpoint when the damn kid wouldn’t vault over a wall when I told him too, though Kaufman told me this was a known issue and had already been fixed.

Through a combination of writing and superb voice acting, I couldn’t help but find myself immediately attached to Atreus, wanting to protect him as much as his father did. Hell, maybe more.

Atreus and Kratos have a symbiotic relationship; Kratos exists to teach Atreus how to become a strong warrior – a God – while the son is there to help his father to remember what it is to feel. As Kratos yells as Atreus for hunting or exploring with too much haste, you can see his internal struggle. He wants to be kinder, gentler… but he doesn’t know how to go about doing that. Callous and abrupt, Kratos is being a father the only way he can; in doing so, he’s acting as every father does – wanting his child to be more than he is. Seriously, I never thought I’d be having any sort of analysis as this regarding Kratos of all people.

Their relationship (and what you hope it can become) only fuels the mystery: what happened to Kratos since his adventures within Greek mythology? How did Atreus came to be? How did his mother die, and what is his family setting off to do with her ashes?

I have no answers after three hours with the game, but let me tell you, I’m incredibly compelled to correct that.

God of War is still God of War, but grown up. Despite fundamental changes, it retains its identity, making it ideal for both returning players and those new to the franchise. We’ll all get to dive in soon; Sony Santa Monica’s newest heads to PS4 on 20 April.