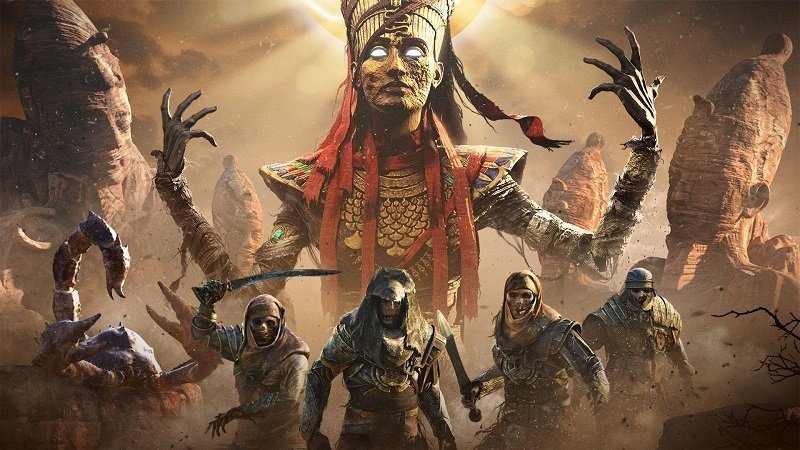 Even though I walk through the valley of the shadow of death...

The next expansion for Assassin’s Creed: Origins; “The Curse of the Pharaohs”, may bring plenty of the supernatural to ancient Egypt, but when I stepped into the shadow of Karnak Temple moments after the story began, Bayek’s world never felt more real. I was lucky enough to visit Luxor and its historic surrounds not too long ago, and seeing in such exacting detail these colossal monuments so fresh in my memory delivered a sense of place I hadn’t felt since I ran down a line of Sulos in the back streets of Byron Bay in Forza Horizon 3.

“The Curse of the Pharaohs” brings you to Thebes, our demo beginning in Luxor before moving on to Hapshetsut’s Temple, the Valley of the Kings and eventually Aaru, the Egyptian land of the afterlife full of bright wheat fields and patrolled by giant scorpions, which is stunning to behold. Not that the supernatural is limited to the afterlife; the titular curse is ever present in Thebes in the form of warrior-spectres rising from the ground in a sandstorm and striking down innocent and guilty alike. From the very beginning “Curse of the Pharaohs” makes it clear this isn’t a straightforward romp through history.

Not that “Curse of the Pharaohs” detours too far from the well worn path, but new exotic locations and a twist of the supernatural is more than enough to make a return visit to Assassin’s Creed: Origins worthwhile. The strongholds are vast and well guarded, providing a unique challenge whether you decide to charge in head on or sneak your way through, with Hapshetsut’s Temple providing a particularly fun infiltration sequence. The sidequests I embarked upon over my two hours with the expansion were interesting and multi-tiered, and not once did I have to visit a cave to retrieve stolen goods or a lost child.

The usual expansion fare is present here; new weapons, abilities, equipment and an increase in the level cap to 55, but the best thing “The Curse of the Pharaohs” offers to players is a new playground to explore, and what a playground it is. I can’t wait to leap back into Thebes, to explore in more detail the Valley of the Kings and the grounds of Karnak, to hide in wheat fields to avoid giant bloody scorpions. You shouldn’t need much of an excuse to dive back into Origins, but “The Curse of the Pharaohs” is shaping up to be a refreshing take on what was already an excellent game.

“The Curse of the Pharaohs” will be available from 13 March, one week later than its previously announced date. It requires Assassin’s Creed: Origins to play and will be free for holders of the season pass or available standalone on Windows PC, Xbox One and PS4.