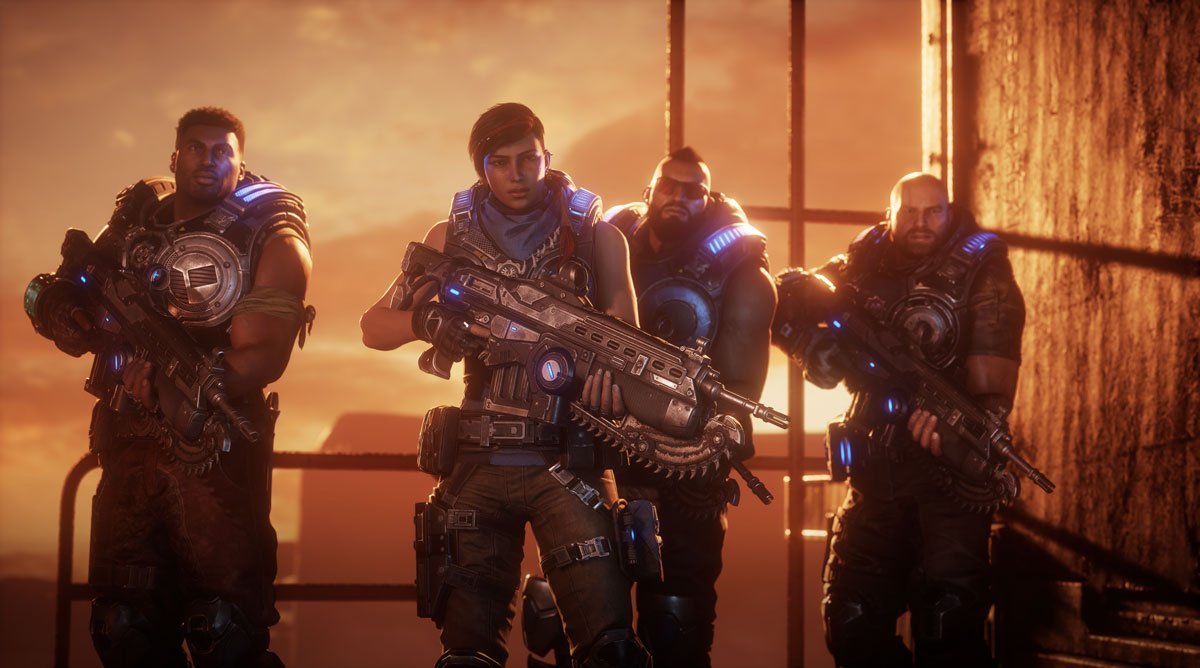 Gears 5 Preview: Campaign and Horde under the microscope

Gears' Horde mode is back, and better than ever.

Gears 5 is fast approaching, and ahead of its (early access) release on 6 September, Stevivor was given two instances — one at Gamescom and the other at The Coalition’s Vancouver-based office — to check it out.

Gamescom centred on Horde Mode, a familiar offering in the Gears franchise since Gears of War 2. This new offering, offically dubbed Horde 4.0, feels like a breath of fresh air and is heavily influenced by modern hero-based shooters such as Overwatch and Apex Legends.

If you’re not familiar with Horde mode, it’s essentially the offering that spawned many, many clones. In it, a group of five players (then four, then five again) are pitted against wave after wave of enemies, with difficulty increasing alongside enemy health and accuracy each wave. At the tenth wave — and the twentieth, and the thirtieth, and so on — the cannon fodder baddies are accompanied by a boss; said bosses receive an additional buff for each that’s encountered.

In Horde mode, you’ll play on a single map and can relatively quickly gather where enemies will spawn per wave. Since Gears of War 4, your team is presented with a fabricator — essentially a military-grade 3D printer — which acts as a mobile base, able to create reinforcements like turrets and barricades that assist in defending a position. While the defense of said location is quite important, you’ll need to eliminate all enemies to move onto the next wave.

Power, introduced in Horde 3.0 and replacing money in iterations before it, is all-important. Felling enemies causes them to drop said Power, and collecting it is necessary for two reasons. First, Power can be deposited in a Fabricator and used to then create support items; second, Power can now be used to improve your specific character, buffing one of four perks ranging from health to weapon efficiency and more. Whereas once Power was shared by your team, this update to Horde means you’re essentially fighting against your teammates to collect Power in order to potentially better yourself rather than pooling it into the Fabricator. It’s a dog-eat-dog world out there.

The hero-based element of Horde changes the meta entirely, presenting unique options for players to choose from. Halo: Reach‘s Kat and Gears’ Del are Engineers, as an example, each able to build anything and everything a Fabricator can produce (everyone else can only create a couple options). Kat’s ultimate ability — the most unique thing each character has — is ripped directly from Reach: a holographic decoy that’s used to distract enemies. Del drop two seeker drones that target enemies so he can concentrate on producing and repairing fortifications.

This new mentality needs to be considered when playing — Armored Marcus’ ultimate ability of instant headshots, no matter where your target reticule is on an enemy, also transfers across to nearby teammates; pair that with newcomer Fahz’s ultimate, x-ray vision to find enemies paired with a ghostlike x-ray shot that goes through any cover, and you’re instantly unbeatable for a limited period of time.

While I was ready to rip my hair out in a preview session — it was difficult to strategise with with Italian members of the press, unable to understand that they could revive fallen enemies or capture a new control point that would have meant upgraded weapons — I can see how working as a team will definitely benefit those in Horde 4.0. A new feature called Gears Allies encourages co-op play, offering XP bonuses when up to 5 friends play together. The more you play, the better XP gains you all get. Ditch randoms and make sure you play with friends; instant (and early) availability on Xbox Game Pass should make this fairly easy, eh?

The final change to Horde mode comes as the ability to play as Jack, the flying bot assistant of the COG. Also available as a character in the game’s three-person campaign, Jack’s meant as an entry point into the Gears franchise. He’s tactical-but-not, a bot who can heal and deal damage but who also can insta-cloak when not in motion; The Coalition says that feature was added in just in case a newbie was so overwhelmed with action that he or she simply just put the controller down.

Jack can deal direct damage but is better as a healer and as someone who can deal area of effect damage; the bot can also hijack enemies and use their husks as a regular character for a limited time. In the campaign, Jack’s an RPG-like character who can add and upgrade skills with each collectible or ultimate service part found; using techology, he’ll be able to tag, blind and even freeze enemies alongside providing strengthening and health buffs to players. In short, use Jack as often as you can, because it’s damn fun to do so.

We spent about four hours in Gears 5‘s campaign in Vancouver, playing two hours of Act II and another two of Act III, respectively. We didn’t complete either act, largely because of the game’s new open-world system. Gone are linear pathways and cooridors; in their place is a game design that The Coalition says favours player choice, offering up the largest maps in Gears history, chalk full of side missions, collectibles and special, overpowered relic weapons — the item this time hinted at by Crimson Omens spraypainted sneakily on the sides of buildings — that players can undertake in their own time. A new map — accessible in the same UI menu that provides access to Jack’s upgrades — makes exploration easy.

To get you from point of interest to point of interest is the Skiff, a new vehicle created by The Coalition that could theoretically exist in the world today. Think of it as a snow- (or sand-) board connected to a gigantic sail, using the wind to propel the craft forward. While functional, its been amped up in true Gears style, looking and handling more like an extreme sports vehicle than a traditional motorcar. It’s tremendous fun to zip around on the skiff, and I look forward to doing more of it in game.

The game’s campaign is very narrative heavy; we won’t get it into it, but will remind players what happened at the end of Gears 4: the evil Swarm were attacking human colonists, kidnapping them for nefarious means. While most fared rather poorly in the exchange, protagonist Kait’s mother fared the best (or worst?): she was kept alive as the Swarm tried to make her one of them. Kait bergrudgingly killed her own mother as an act of mercy, and in doing so was given a special necklace beforehand. The necklace, first belonging to Kait’s mother, was revealed to be a Locust insignia. Is she one of them? We’ll likely find out in Gears 5.

That recap, by the way? I didn’t pull it from my memory and I certainly didn’t hit up YouTube for a summary; instead, it came from a video that will play before players start Gears 5‘s campaign. Studio head Rod Ferguson told Stevivor that The Coalition is treating players like they’re spectators of a TV series on Netflix; with some between seasons, a little recap is necessary. In addition to a range of accessibilty options for colourblind or disabled players, this is just one initiative of several designed to make the outing more inclusive.

In addition to the open-world elements introduced to the Skiff is a new way to (maybe) approach combat. Called “player initiated combat,” some setpieces have been inspired by the likes of Bioshock Infinite, in that the Locust don’t immediately engage with the COG but only react when the enemy is spotted. This means you can theoretically stealth your way through an entire combat encounter. While The Coalition says it’s possible, we could only manage two or three stealth kills in an area before being caught out; the studio said QA testers had to engage an area thirty or more times to perhaps find a pathway to make a stealth run happen. I’m sure there are many out there reading this, licking their lips and rubbing their hands together saying, “challenge accepted!” More power to you.

Gears 5 prides itself on presenting five full modes at launch: in addition to campaign and Horde mode, expect a range of multiplayer offerings alongside the new Escape mode and a special map builder. Part of the multiplayer mode is Arcade, a player-friendly engagement less reliant on the Gnasher shotgun and with mobility turned down a bit in an effort to make the mode far more friendly for newbies.

In addition, The Coalition is including Tour of Duty, a new quest based system similar to a Battle Pass, with three unique challenges that players can accomplish per day. Completing said challenges will help a player level up, earning cosmetic items as he or she does so. Additionally, earning groups of specific medals will also earn players additional cosmetic items. Tours are grouped in certain rotations, with the ability to progress through ranks with each one. It’s not a bad reward system, espcially considering it’s free with the game.

Our preview of Gears 5 feels like we’ve barely scratched the surface, but thankfully there’s hardly any time before the masses can get their hands on it. Expect The Coalition’s latest from 6 September on Xbox Game Pass, or from 10 September for those without. Gears 5 will be available on both Windows PC and Xbox One.