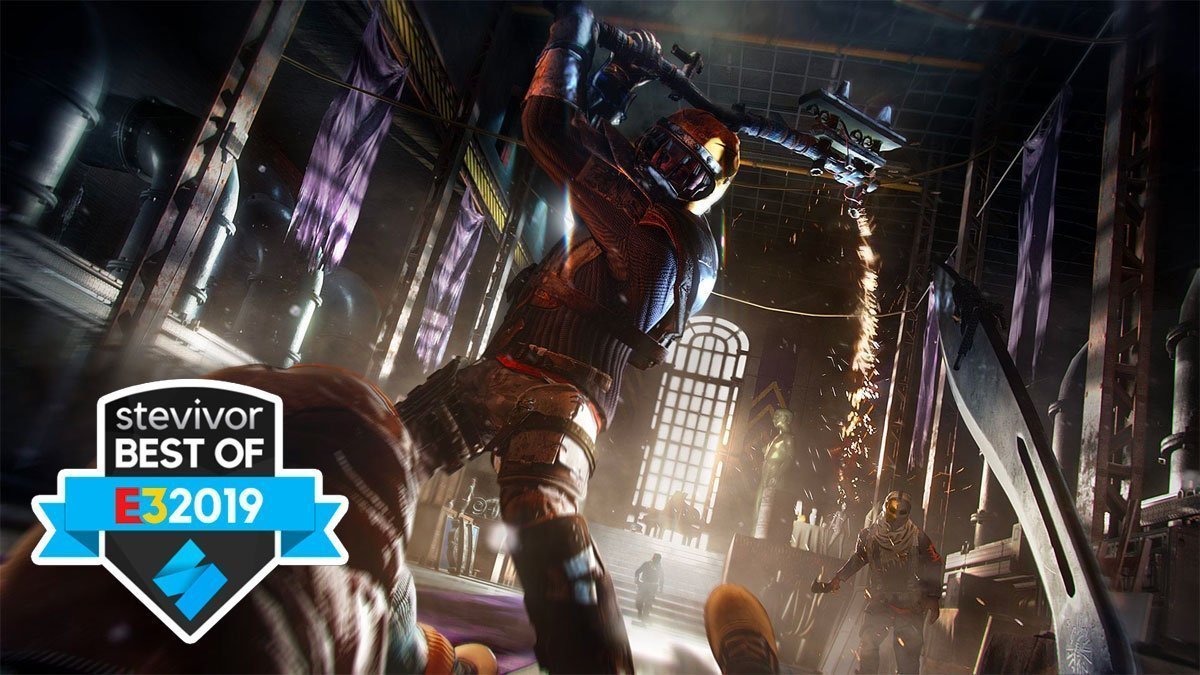 And be mindful of what you do.

Dying Light 2 feels a lot like Mirror’s Edge, only with terrifying zombies and a greater purpose to parkour yourself at high speed around the city: to escape those freaking zombies. In our hands-of demo at E3 2019, we were introduced to protagonist Aiden Caldwell, a man familiar with getting himself into, and out of, sticky situations.

The strong parkour mechanics bring new meaning to the term “survival horror”. It’s not so much about conserving resources as it is utilising the environment to escape harm. I’ll reaffirm that we saw a controlled demo played by someone following a script, but the movement system looked amazing. There were some terrifying encounters with rooms overflowing with blood-thirsty undead, but Aiden always had an escape route, which often required some ingenuity.

He made spectacular leaps between buildings and nimble dashes through dilapidated walls, all at the last moment before being torn to shreds, just to add to the drama. Even though I wasn’t playing, I felt quite anxious with how close Aiden came to his demise, but he always managed to scale a wall or fling around a corner at the last second to avert certain death. He’s certainly nibbler than his predecessor, which draws the closer comparisons to Mirror’s Edge, and it looks like he’s able to interact with every building in a myriad of ways. There’s plenty of verticality in Dying Light 2, and always several ways to vault across buildings and slip away from seemingly inescapable situations.

Set in a fictional European city 15 years after the first game, humanity is struggling to rebuild as the murky politics of competing factions slows progress while they fight for power. This crucial element, and Aiden’s central role, makes Dying Light 2 a game of choice. It’s not a Life is Strange-style series of small, seemingly inconsequential decisions. Aiden has to make big calls, and they will drastically alter his story, gameplay and even the world around him.

The E3 demo focuses on a disagreement about the city’s water supply, which had been shutoff some time earlier. Aiden acts as the muscle for a bloke named Frank, who is attempting to make a deal with a group called the Renegades (they sound trustworthy) to get the water turned on. He doesn’t do a very good job; it all goes pear-shaped and Frank gets shot. Told through a highly immersive first-person cutscene, this is our first critical decision, which has to be made immediately. Do you chase the fleeing Renegade goons or stay with Frank who will surely die with serious medial aid?

I’m not sure what I would have done, but this was a heartless hands-off demo, so Techland decided to seek revenge and left Frank lying in his own blood. During the running commentary, the development team wouldn’t guarantee staying behind would have saved Frank, but insinuated abandoning him had signed his death certificate.

There were a few more key decisions to be made during the 40 minute demo, but none more important than the end goal of this mission: to turn on the ailing city’s water supply or believe a military general who insists Aiden is misinformed and the water has been redirected for good cause. Perhaps if he had actually explained why and not played the stereotypical vague villain the decision would have been clearer.

In this playthrough, the water was reconnected to the city. We saw that it had been redirected to flood a nearby town, and without a constant flow, it slowly drained to reveal a zombified hand emerge from the ground. Techland was quick to clarify this decision could have gone either way. If the player hadn’t turned on the water pumps, the city would have stayed dry and the town would have remained submerged for the duration of the campaign. In this scenario, the flooded streets could be visited, Aiden might like to go for a swim, but the area will largely remain unavailable due to that single decision.

This branching storyline means you will only experience around half the game in a single playthrough. There is no turning back, so the decisions made will define your story in Dying Light 2 and permanently close scenarios that cannot coexist. Completionists face multiple playthroughs. But after experiencing the horrors while following your intuition, will you have the courage to go back and do the opposite?