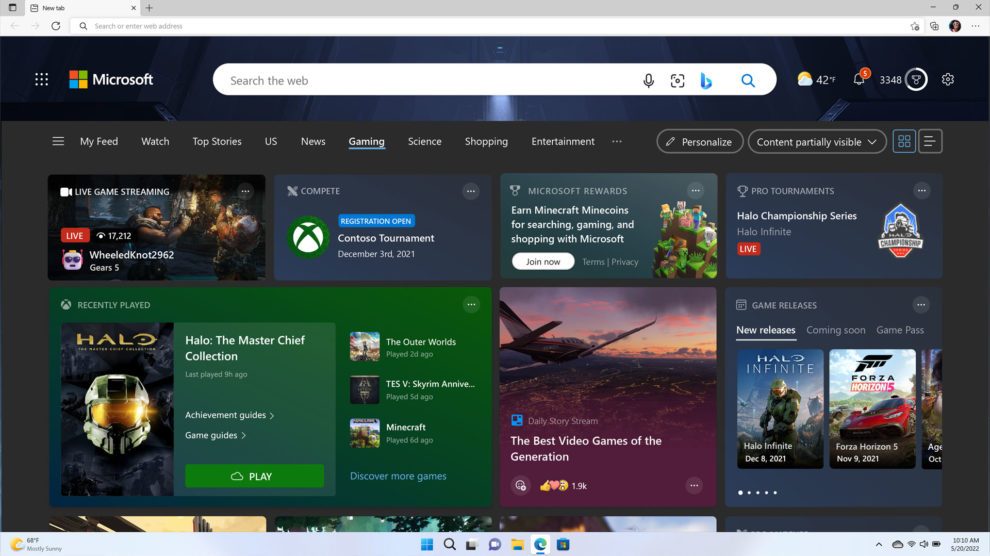 “With Windows 11, they’re doing a lot of things to really delight PC players. There’s a whole new DirectX, so DirectX 12 Ultimate is going to give game developers even more tools to improve performance and reduce latency,” McKissick said. “Also last year we introduced DirectStorage, which is this thing that makes games load a lot faster.”

A Game Pass widget is also planned to make it easier to jump in and discover new games. Finally, a Controller bar feature will offer up UI that will allow you to better control gaming functionality when plugging in a controller.

“Controller bar enables players to jump back into their games or even access Xbox Cloud Gaming without the need for a mouse and keyboard,” Microsoft said in a press release. “This is currently being tested in the Windows Insider Program.”

On the Microsoft Edge side of things, the browser will offer up a gaming-themed new tab page (seen in the image at top), a games menu that accesses titles like Microsoft Solitaire, further efficiencies and a clarity boost when using Xbox Cloud Gaming.

I don’t think the enhancements are going to get me to swap over to Edge any time soon (sorry, Microsoft), but they’re a nice little bonus if you’re already there.