Home » Guides » Destiny 2 Forsaken Malfeasance guide: How to get the Exotic hand cannon 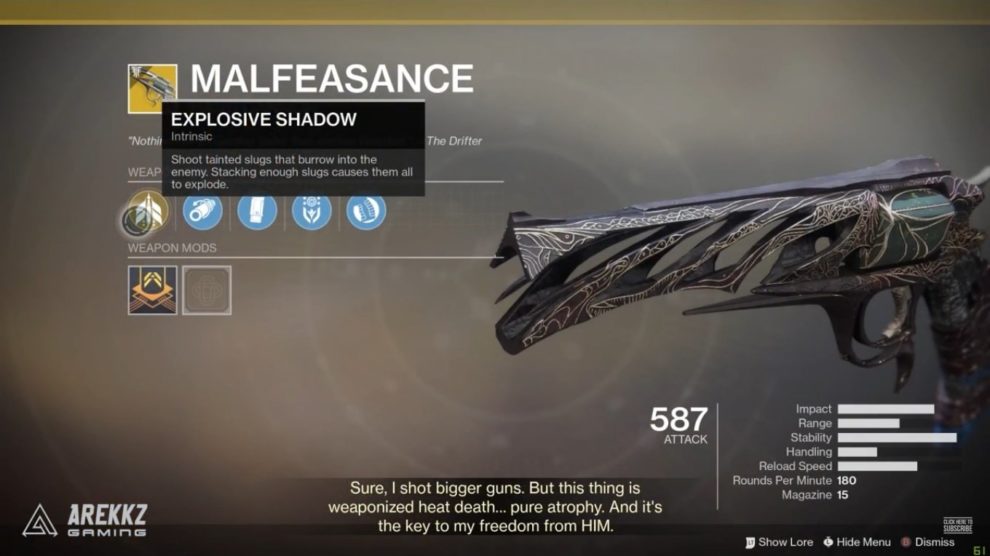 Destiny 2 Forsaken‘s Malfeasance Exotic hand cannon is now up for grabs in-game. We’ve detailed how you can get your hands on the weapon.

To kick off the Malfeasance quest, you’ll need to play Gambit and cross your fingers. Step one begins when your Gambit team fights and kills an Ascendant Primeval (in place of a normal Primeval).

The Ascendant Primeval will spawn The Seething Heart when it’s killed.

“We’ve heard player feedback concerning the spawn rates of the Ascendant Primeval Servitor, and we are making adjustments to how frequently it will appear,” Bungie wrote. “During week three of the curse cycle, also known as a full-curse week, the Ascendant Primeval Servitor will have almost the same chance to spawn as any other Primeval. We will also be increasing the chance for the boss to spawn during lesser-curse weeks, but it will still be lower than during a full-curse week.

“For full transparency, since the Ascendant Primeval Servitor spawn rate will increase significantly when these changes are released, we are tweaking how ship and Sparrow rewards drop from the boss. Vanity items are no longer guaranteed drops for subsequent boss kills after you earn the quest, instead the vanity items will now only have a chance to drop.”

Step 2: Head to The Drifter

The Drifter will turn The Seething Heart into your next quest step.

The next step involves killing Taken bosses or minibosses in The Dreaming City. They’re the ones with yellow health bars.

This next step requires you to play The Corrupted, the special Strike that unlocked after Last Wish’s first Raid completion. The catch is that you have to run a 580 Power variant of the Strike, accessible via Patrol. The good news is, you can tackle the Strike in two fireteams of three, giving you six total Guardians to do so. Once in the Strike, follow in-game prompts to head to Callum’s Grave and receive the Depleted Weapon Core.

Step 5: Head back to The Drifter

You know the deal by now.

Step 6: Back to Gambit

This next step requires you to progress two status bars to 100%: wins and banked motes.

The next step requires you to defeat 25 opposing Guardians in Gambit — this can be by invading the other team, or merely killing invaders that the other team sends to your map.

The last real step is to either kill the other team’s 4 players in one Gambit invasion, or a teammate can progress your progress by 1/3 instead (which means they’ll need to do it three times over).

Step 9: Back to The Drifter

Once the last step is complete, you can head back to The Drifter for your prize: Malfeasance. Congratulations!

Malfeasance’s main perk is Explosive Shadow — the hand cannon will shoot tainted slugs that burrow into the enemy; shoot enough slugs into an opponent, and it will explode.  and stacking enough slugs will cause your enemy to explode.Malfeasance’s also has Corkscrew Rifling, an extended mag, the Taken Predator trait and a heavy grip.

Want a video instead? Easy — thanks Arekkz!

Destiny 2 Forsaken is available now on Windows PC, Xbox One and PS4. In addition to the Malfeasance Exotic hand cannon, its weekly reset has offered a third Seed of Light, a new dungeon and the Exotic bow Wish Ender.