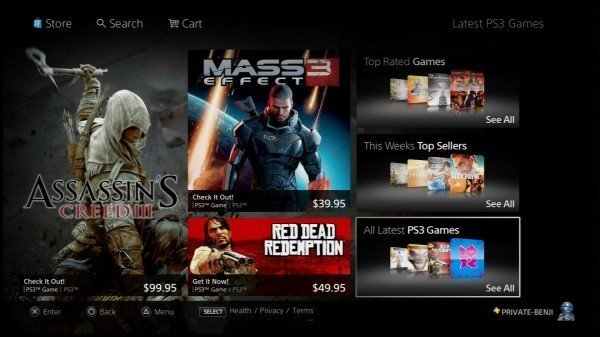 Sony claims that the PlayStation Store boasts more than 20,000 pieces of game related content and over 100,000 videos and TV shows and that the new user interface comes with powerful and easy to use search functions. I would disagree.

On first booting up the new PlayStation Store I was overwhelmed. Navigating through to my trusty PlayStation Plus menu was now buried within another menu. Big, semi animated ads for upcoming games and new releases dominated the screen. I felt lost and the effort of navigating the store was almost enough for me to give up on purchasing The Unfinished Swan (review incoming) and downloading the PlayStation All-Stars Battle Royale beta. Then things got worse.

Once I finally found the PlayStation Plus menu (it’s inside the Games menu now) I looked for The Unfinished Swan. It wasn’t on the first page of new release ads taking up far too much space, so I headed to the second. There it was, taking up at least a third of that page. Now, I know it’s a new game and an exclusive but I think the layout of ads and game links is just too messy, too big and too annoying in the new store. I much prefer a sleeker, streamlined store, rather than one that seems as if it’s screaming “JUST BUY IT! BUY IT ALL!!”.

But maybe that’s just me.

I clicked on the link for the game and was taken to a screen that would be familiar to anyone who’s purchased content through an Xbox 360 lately. In fact the entire experience is now very reminiscent of the Xbox 360. I was presented with some information about the game, the price, etc and then had the option to purchase. I added The Unfinished Swan to my cart and kept shopping.

Next up was the beta. Surely that would be easy to find.

It wasn’t one of the large advertised games on any of the three scrollable screens within PlayStation Plus nor was it in the trials and demos section. Finally I found it within the “Exclusives” menu. You may consider me silly for not looking here initially  but, in all honesty I entirely expected it to be on the main page and the new shop interface had disoriented me.

I added the PS3 and PS Vita betas to my cart and headed to the checkout. Then disaster struck.

My wallet was empty so, doing as I always had I clicked through the checkout and assumed the store would add the required funds to my wallet and complete the purchase.

I received a message over and over that simply read “An error has occurred”.  No error code. No details. Simply a notification that there was an error. So I decided to try to add funds to my wallet manually. No luck there either. Trying to add funds yielded me the message “Funds could not be added to your wallet (56)”. Maybe 56 was an error code? Not one that I could find on the Sony support page. So that was another dead-end. I tried to add funds via the SEN website and via my account information on the PS3 and every method failed. So, I called Sony support. They were helpful, but said they would need to escalate the issue and would get back to me within a few days. Needless to say I was not too impressed. All I wanted to do was buy a game and play it. A task that was seeming more difficult at every turn.

Eventually, I abandoned my attempt to purchase The Unfinished Swan and downloaded the betas only. Utterly defeated by the clunky, flashy new store I turned off my console and walked away.

This morning I tried again and was successful in purchasing through the new PlayStation Store. My feelings were mixed. I was pleased that I was once again able to use the store properly and simultaneously annoyed that the errors caused by the new store meant that I’d had to wait an extra day to play the game. First impressions are always important and for me the new PlayStation Store left me angry, frustrated and annoyed.

This, I assume, is not the reaction or the feelings that Sony would be hoping to engender with the redesigned store. It is expected that with any new launch there may be teething problems and I seem to have experienced the worst of it. It made me think though, was a store design really necessary? A lot of fans had been clamoring for something better for the longest time and while this new PlayStation Store is certainly shinier, newer and louder (in the Hawaiian shirt sense of the word), I’m not sure it’s better. Over time as it grows and matures I’m sure I’ll learn to appreciate the redesign but for now I’m not convinced.

Let us know about your experiences with the new PlayStation Store down below.