Stevivor
Home Features Interviews Jean-Francois Poirier and Child of Light: Making a game his daughter will... 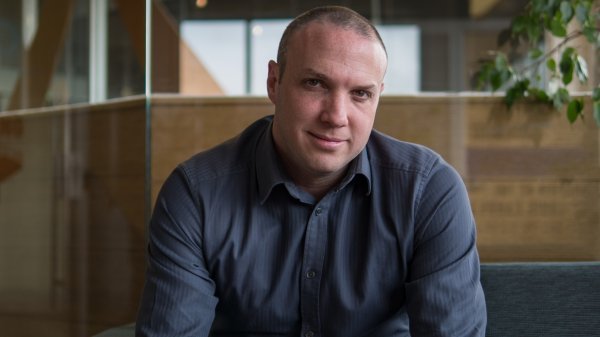 Jean-Francois Poirier and Child of Light: Making a game his daughter will be proud of

At the risk of making this sound like a dodgy election advertisement or something, Jean-Francois Poirier is a man with his head on straight.

Poirier, Producer on Ubisoft’s Child of Light, was in Australia last week for a Vivid Sydney panel on the making of the game. Poirier also took the time to sit and chat with Stevivor on the same topic. Naturally, as two Canadians are wont to do when gathering in Australia – or anywhere else for that matter – we ended up talking ice hockey for ten minutes.

No one was to blame, really; the Montreal Canadiens were playing in a do-or-die Stanley Cup Playoff semi-final as we sat down to speak, and as Poirier works at Ubisoft Montreal, you can understand why it would mean something to him. A man’s got to have priorities, eh?

Finally moving off of hockey, Poirier began to speak of an even bigger priority: his family. This time though, the discussion was on topic with Child of Light.

Poirier is an Ubisoft veteran, first working in marketing at the publisher before moving on to various production roles. He’s worked on Prince of Persia: The Sands of Time, four Tom Clancy’s Rainbow Six games and two Tom Clancy’s Splinter Cell games. It’s safe to say that he’s more proud of the fact that he’s a father.

“Where I am in my life right now, and what I’ve done at Ubisoft – well, I have kids now, and I didn’t want to only work on violent games,” Poirier said. “Sometimes, you need that breath of fresh air.

“Patrick Gould, our Creative Director, pitched the idea [of Child of Light], and I said, ‘Man, I’ve got to work on this game.’

“Patrick finished up on Far Cry 3 and wanted to do something that was the exact opposite,” Poirier continued. “He wanted it to be a JRPG-inspired game. I would say his goal was to have a Final Fantasy VI game that you can play, but with the artwork of [Japanese artist Yosh*taka] Amano. He wanted to play in paintings.”

With hindsight, we all realise that Child of Light was a tremendous idea — and has now proven itself as a great game — but that didn’t mean it was approved by Ubisoft instantly.

“It’s cool as an idea; it’s daring,” Poirier mused. “But, when you want to pitch an idea, it takes more than just that.

“For [Gould] to pitch a game, he has a lot of weight, but it at the same time, to do the game we wanted, it was important for us to position it as a digital title, rather than a boxed title to sell for $50 [USD],” he said. “If we weren’t precise about it [at the time of the pitch], we might have been asked to do a big $60 [USD] game. It was important for us to keep it small and have freedom.

“We really had to work to give [Ubisoft heads] a lot of reasons to say yes.”

Some of those reasons were purely business.

“Looking from an [Ubisoft] HQ standpoint, we’d be boosting digital sales and leveraging an in-house engine with the UbiArt framework,” Poirier said. “We’d also potentially be developing a very new IP at a small cost.”

The better reasons went back to Ubisoft’s employees and their families.

“For those veterans that have been shipping big, triple-A titles, at some point they want to do something else,” Poirier said. “It’s also a challenge that we gave ourselves at the studio. We know how to make big games, but smaller games is tougher.

“There’s a big indie scene going on – and obviously, we’re not indie – but it was interesting to go in that direction and let us try something different at Ubisoft,” he continued. “It was great for our employees as well – this speaks to them. For employees, whether they were working on this or not, the message is that Ubisoft Montreal does big projects, and they’re extremely rewarding, but there’s also an opportunity to work on smaller titles that provide a very creative experience and challenge as well.”

As Poirier said, Ubisoft’s quite good at producing large titles, but processes used on Far Cry 3 wouldn’t necessarily work with a title like Child of Light.

“I speak for myself, but I can speak for a lot of senior people on the team: we needed to adapt. We needed to revise our workflow, take more responsibilities. You know, if someone doesn’t do something, then it falls through. We had to reorganise to make the team more agile.

“We had to give responsibilities and ownership to certain people. Things like battles were given to a game designer, to have ownership and to make sure the feature was making progress with the programmers. Same for level design ingredients, co-op. People owned those, and drove them and got them done.

“On a small team, if someone gets hit by a bus, you’re kinda screwed. That’s the risk. But, the reward is that someone’s footprint on the game is so large. The guy who made the game’s creatures is one guy. He made all the enemies.”

“Back to the seniority of the team, it’s where things paid off,” Poirier continued. “A lot of us could react pretty well to problems because of our experience; we could change our momentum as a result, super-fast, because of our team size. It was a small boat to steer, so we could make decisions very fast.”

One such decision proved to be the only thing that divides critics when it comes to Child of Light: the decision to put the entire game in verse.

“[Knowing what I know now about that,] I wouldn’t change a thing,” Poirer said. “The reason I’m saying that is, ultimately, one of the pitch lines for the project was, ‘we’re creating a playable poem’. We hadn’t planned rhymes at that point, but we wanted to go for an experience like a playable poem. We wanted you to play in a painting, with intimate music, that kind of thing. When we started putting everything the dialog together, it was another opportunity for us to take a chance to do something different.”

In the end, being different, small, and free creatively mattered the most. Again, for all the right reasons.

“We looked at fairytales [for Child of Light] because there’s a simplicity and symbolism about them,” Poirier said. “They’ve been around for centuries. We took that and adapted it to a more modern and positive feel.

“Having a daughter, I can really push on that factor,” he said, with a glow about him. “There’s no Prince Charming. It’s a coming of age story, and our main character, by using her gifts to help others, is how she grows and reaches her full potential. That’s the emotional connection we wanted to create with our main character, and I hope we’ve achieved that.”

Jean-Francois, this journalist can certainly tell you that you did. Much like the Canadiens in the game that was taking place, too; our conversation ended near the completion of the Canadiens’ first period, and they were up 1-0 at the time, eventually going on to win the game.

Child of Light is currently available on PS3, PS4, Windows PC, Wii U, Xbox 360 and Xbox One. A PS Vita release is expected soon. Read our review here.