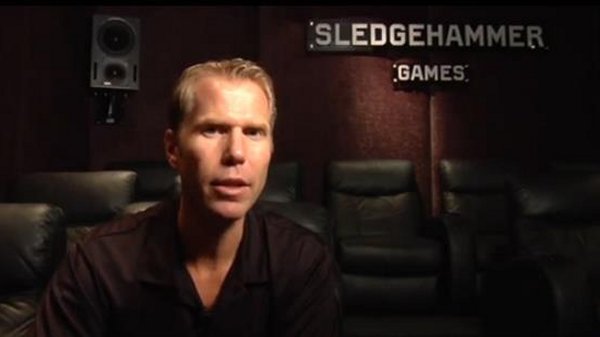 Ahead of EB Expo, Stevivor was lucky enough to sit down to Michael Condrey, Co-founder of Sledgehammer Games, to discuss Call of Duty: Advanced Warfare.

In the interview, Condrey sheds some light on Sledgehammer’s past — as well as his own — and innovations in the newest game in the Call of Duty franchise.

Steve Wright, Stevivor: If you believe Wikipedia, you’re said to have likened getting a job at Activision to work on Call of Duty like being a filmmaker finding out they’re to work with Steven Spielberg. Flash forward to Sledgehammer’s first solo Call of Duty game, and you’re doing work in the same space as Avatar 2. Can you describe how surreal that must be?

Michael Condrey: Thank you for that, Steve, it has been surreal. We had an idea for a studio and a culture and a development methodology we thought would be the ‘best in class’ way to work. To then to have the opportunity to marry that with Call of Duty, the biggest franchise in entertainment – and then to find out we had an opportunity to lead the franchise was quite surreal, in your words. It’s fantastic. Activision has been amazing. We’re the first studio to be given three years to make Call of Duty. We’re the studio that’s been given the charter to make a first true next-gen Call of Duty.

At times I equate this to being an athlete and being drafted by the most successful sports team; for me in the US, the most winningest North American football team is The Patriots. I feel like I’ve been drafted by the Patriots. The coach has said, “ok, you’re in,” if you will.

To end up working with Kevin Spacey, and James Cameron’s technology used for Avatar 2, it’s quite surreal, actually.

Stevivor: You’re also behind one of my favourite games of all time: Dead Space. Both are shooters, and both have suspense and tension, though one is horror and one is more political intrigue. Nonetheless, I’m sure Dead Space has influenced this title, and I’d be curious to know how so.

Condrey: Thank you for that compliment. Dead Space was a period of time that we’re very proud of, and have been humbled by. It was a very different development for us; it was a grassroots, ‘prove yourself’ type of experience. We knew we had a concept and could deliver something special, but it was a fight. Nobody on the team could have expected the critical acclaim the game got. We didn’t expect it to be as big as it was.

The scale of Call of Duty; the size, the magnitude and the fan expectation, and just the offering of hundreds of hours of multiplayer, and co-op, and a great campaign experience. We came in excited. Call of Duty is the biggest, most ambitious thing we’ve worked on. What we’ve taken from Dead Space is that you have to focus on quality. We had to scale that to a much bigger game when talking about Advanced Warfare, but quality still has to remain one of our core values.

Hopefully, you’ll see that in the game. Activision has given us the time and resources to deliver a quality game. We’re proud of this one and really think we’ve brought that Dead Space focus on quality. 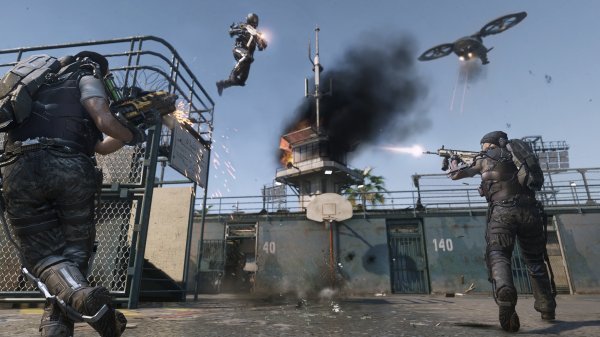 Stevivor: It seems Sledgehammer is constantly under pressure: You were under the pump helping out with Call of Duty: Modern Warfare 3, and now, arguably, you’re needing to prove yourself with this solo effort. Are the situations comparable or not? What’s similar or different?

Condrey: I’ve been making games for a long time, and I think there’s always a certain pride of work, and stress, that comes alongside development. Dead Space had a different level of that. Starting a new IP has a level of risk, as does starting a studio from scratch. When Glen [Schofield, Co-founder of Sledgehammer Games] and I started our first day of work, we were both sitting in a car without a team, and that was certainly stressful.

When we were brought in, it was stressful because we’d come to Activision knowing we could do great work. And then we were thrown in to work on Activision’s crown jewel, with the Godfathers of the franchise – I mean, Infinity Ward had been doing remarkable work on Call of Duty for ten years. That stress was about proving that we could not only contribute, but could be the best. That we could become peers and deliver quality work like Infinity Ward. It was a great experience.

This one, well this is another level of anticipation. To be given the reins, and to establish ourselves as a standalone lead studio along the likes of Infinity Ward and Treyarch, taking the frankchise to the next generation… It’s the most ambitious project we’ve ever set out to do, and it comes with a lot of anticipation of what we can do.

Stevivor: Multiplayer is quite different in Advanced Warfare. Can you walk me through its evolution?

Condrey: That’s one of the things we were most proud of with Modern Warfare 3 – it got Action Game of the Year, and was well received by fans. We’ve heard loud and clear that fans want innovation in the franchise. We took that seriously. From day one, the campaign, multiplayer and co-op, well, we sat down to innovate and also put our mark on it. We discussed what makes Call of Duty the biggest in the industry; you can’t break that, but it was also clear from day one that fans wanted new ways to play.

The exoskeleton, the advanced soldier, new movements and mechanics, we really took that and made it the heart of multiplayer. It innovates that space. The exoskeleton provides the biggest changes to movement the franchise has ever seen. Boosts, verticality, slams, dodges…

Pick 13 and our loot system, called Supply Drop, it’s such a massive system to bring to Call of Duty in terms of it being a reward system. There are some major innovations we’re quite proud of.

Stevivor: You’ve mentioned the exoskeleton as being the heart of the multiplayer. I’d assume that extends to things like the game’s four player co-op as well?

Condrey: The exoskeleton was an idea we came up with early on. We were looking for new ways to experience Call of Duty, and that was the catalyst. It is what gave us boost and dodge and grapple; it became the heart and soul. The exoskeleton is largely the single biggest innovative driver… 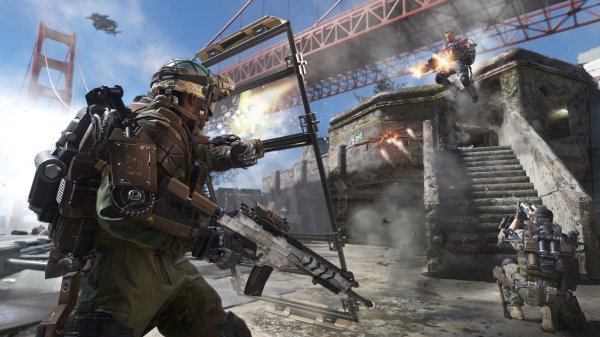 Stevivor: Have the comparisons to Titanfall stopped now that more and more of Advanced Warfare has been revealed?

Condrey: You know, it’s funny; I think at every time in my career, there’s been comparisons to other forms of entertainment. With Dead Space, there were other shooters that were seen as our rivals. We’ve never really been into that.

If you look at Tom Cruise’s new film, Edge of Tomorrow, it’s pretty similar to Advanced Warfare, so people are asking us if that film inspired our game. But we went with the exoskeleton three years ago; it’s interesting now to see how in the public eye the exo is. To us, it’s true to Call of Duty and it’s integrated well. I don’t worry about comparisons to other games.

Condrey: That’s true! There’s a lot you can do with the exo – boost, dodge, slam, grapple – it is really robust. Wallrunning is not one of those things you need.

Stevivor: And fair enough, too. On the subject of things we need, we haven’t had any news on dedicated servers here for a bit – is there any update you could give me?

Condrey:Yeah, we’ve got some announcements coming. Yes, we will be supporting dedicated servers and there will be announcements soon on which providers and platforms. I can’t answer just yet, but you can let your community know that it’s coming.

Stevivor: Excellent news. Michael, thank you so much for your time. It’s been a pleasure.

Condrey: Thank you very much, Steve.

Call of Duty: Advanced Warfare is available from 4 November on Windows PC, PS3, PS4, Xbox 360 and Xbox One. We went in-depth with the game at E3.