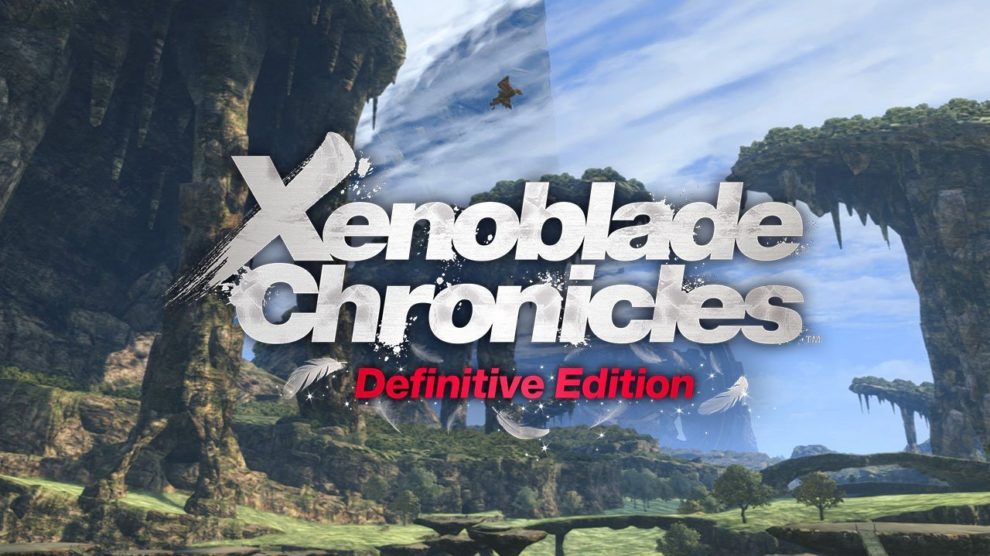 Immediately upon release back on the Wii in 2010, RPG fans knew that Xenoblade Chronicles was something special. The game represented one of the few full-bodied RPGs on the system, though was released fairly late in the powerhouse’s lifecycle. While most sang its praises, you’d be forgiven for overlooking it in search of the newest, hottest things. A 3D-ified re-release on Nintendo 3DS five years later gave new life to Shulk and friends — who knew he wasn’t just in Super Smash Bros — and another five years later, a Switch re-re-release is doing the same thing.

Set in a world of endless ocean, Xenoblade Chronicles’ history states that in ancient times, two titans fought each other for supremacy until a final blow was struck. From then on, the lifeless bodies of the organic Bionis and the mechanical Mechonis remained locked in place, allowing life to spring up on their bodies. Fast forward to the time the game is set in, and the humanoid Hom race, residing on the Bionis, are locked in a long war against the Mechon, robotic residents of the Mechonis’ corpse. Kidnapping the Homs to use as a source of energy, the Mechon are an ever-present threat for the residents of the Bionis.

After a devastating attack on their hometown of Colony 9, Shulk and his best friend Reyn set out on a journey to strike at the Mechon and avenge their home and friends lost in the battle utilising the power of the Monado – a mysterious sword with untapped potential, one of the few things actually able to damage their robotic enemies. Along the way, they encounter unexpected new forms of the Mechon, other races living on the Bionis, and a slowly unfolding story about the mystery of the Monado. 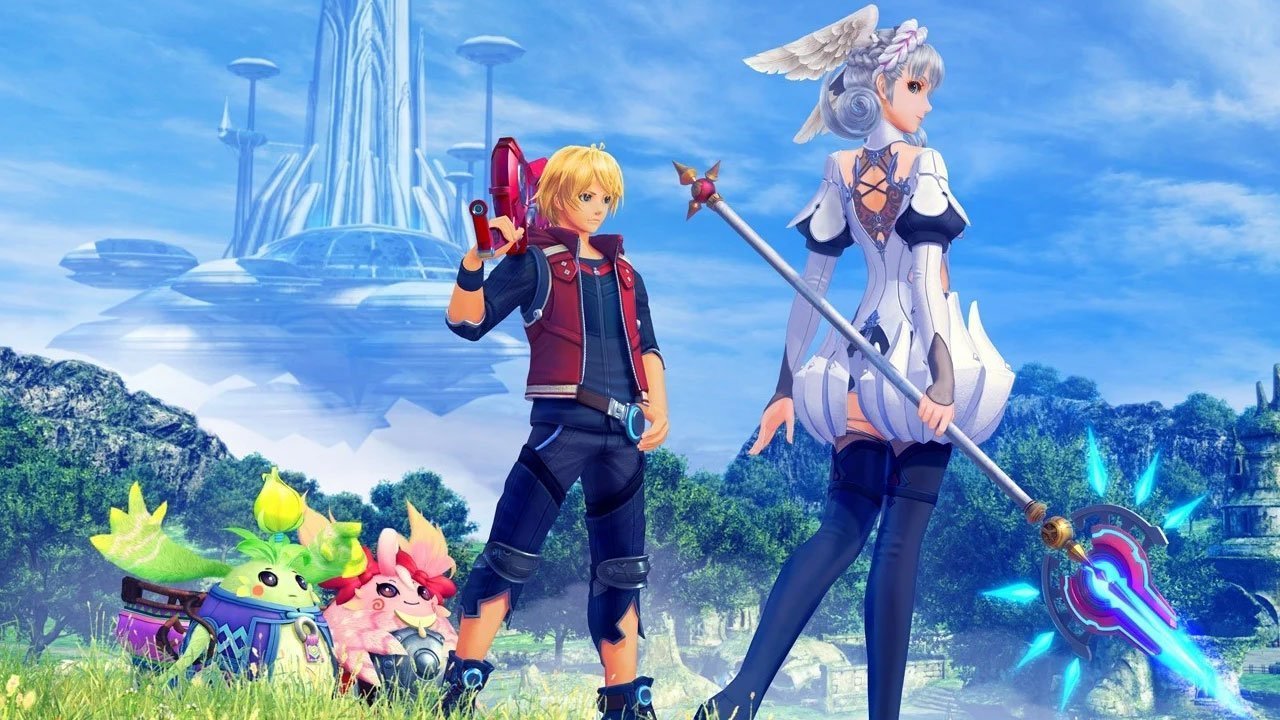 The story itself is a strong point of the game – cutscenes are regularly occurring but not overly long, and clearly signposted on your map. There’s no accidentally triggering a boss fight or cutscene if you want to focus on levelling up or exploring instead. When they do occur, story scenes are dynamic and interesting. Being an RPG it would be very easy for Xenoblade Chronicles to fall victim to Talking Head Syndrome, forcing us to sit and watch as a bunch of vaguely British-sounding characters drone on and on. Luckily this has been mostly sidestepped, and you’ll see a lot of action and cinematic framing as you move through the game’s cutscenes, adding spice to the storytelling that is always fun to see in this type of game.

In combat you’ll focus on three of your seven party members, controlling a single member directly. Much like Monster Hunter, enemies are seen freely roaming the game world and vary from passive to actively aggressive, attacking your party if they see or hear them nearby. Once in combat game operates with a basic auto-attack, causing you and your party members to strike their targeted enemy by default whenever they are in range. Characters then have a selection of special attacks with varying effects, buffs and debuffs. Certain attacks will inflict extra effects when used in combination, or when striking a foe from the side or rear.

Some enemies, such as the Mechon, require specialised tactics – besides the Monado, standard weapon strikes will only damage Mechon enemies 1 HP at a time. To take them down you’ll need to either enchant your weapons using a Mondao skill that allows them to overcome this damage limit, or inflict the Break and then Topple debuffs to temporarily incapacitate them. It’s this layer of complexity that brings strategy into play for the combat, rather than simply leaving your party to automatically bash away at whatever creature gets in their way. 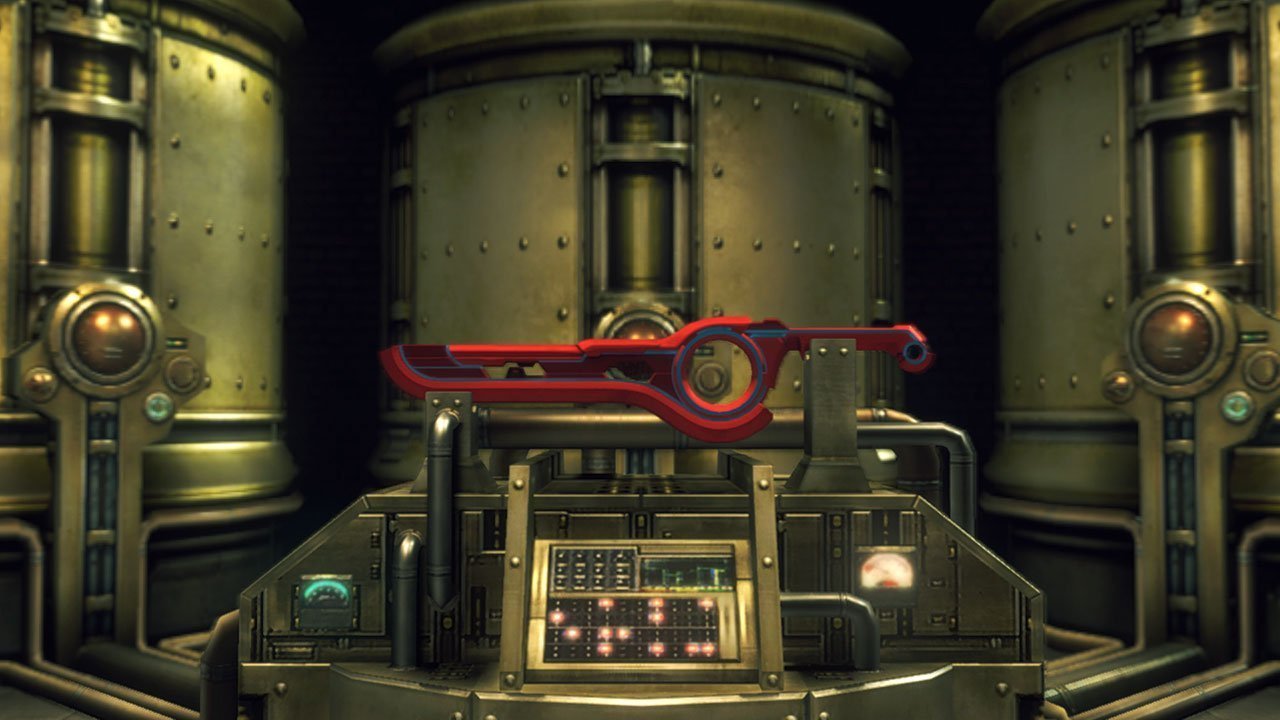 An extra layer of detail is added to your combat via the affinity mechanic. Throughout the game, certain dialogue choices, optional cutscenes and sidequests will increase the affinity rating between your party members, eventually allowing them to share skills and combat bonuses based on their level of friendship. While in combat, you’ll occasionally be presented with a quick time event when one of your party members perform a critical hit or miss an attack. If timed properly, your characters will call out to each other to compliment a well-executed attack or encourage them to keep fighting if they’ve missed the mark.

Affinity allows you to perform chain attacks with your three party members, and higher levels of affinity increase the chance of gaining additional moves to extend the chain. It’s a cute way to implement this kind of mechanic, and really helps sell the party as a cohesive unit. Against a backdrop of everlasting war against an enemy force that wants to eat you for dinner, having someone reassure Shulk that “you’ll get ‘em next time, mate!” when his attacks are way off-base is a nice touch.

Environments are huge and sprawling, even by today’s standards, usually featuring multiple levels and taking more than a few minutes to cross from one end to the other. While Monster Hunter 4 Ultimate’s maps were definitely large-scale, Xenoblade Chronicles exceeds them by a large gap. Pretty much anything you see in the distance can be reached, given enough time and effort. Enemies roam the plains, caves and forests you move through, moving in packs or individually, and have basic animations that increase the feeling of life in the world. Rhino-like Armu will travel in packs, with smaller and younger members of the group running and jumping to keep up with their larger parents.

You’ll also encounter higher-levelled Unique Monsters, who tower above you and the rest of the creatures in their environment. Despite the scale of the world, loading times are barely noticeable. Moving between fast-travel points on the same map is all but instantaneous, and moving from one map to the next will rarely take more than a second or two. For a game released on a handheld, this is exactly what you want to see – nobody wants to waste their precious game time on public transport, waiting for the next area to load up.

This Definitive Edition has really amped up the game’s visuals, making them crisp and clear and (finally!) detailed in 1080p. Even better is a fresh UI, far easier to read and navigate than its Wii or New 3DS counterparts (and fixes the pause issue we despised on 3DS). A newly remastered soundtrack continues to add to the experience, ditching some of the compression that marred the original; you can switch between the soundtracks though if you’d like to pretend you’re partly in 2010. While this makes the package a great fit for those playing for the first time, a new epilogue called Future Connected has been added for returning players. Set one year after the events of the original game, it adds roughly 20-25 hours of new content and is best experienced afterward (though can be played from any point on a separate save file).

Xenoblade Chronicles was a gem on the Wii and a good add to RPG collections even on the New Nintendo 3DS. We praised the 3DS re-release for its ability to be enjoyed on the go — something that’s great for any long-running RPG, to be honest — and the Switch version’s able to do that while adding a new coat of paint and content at the same time. The end result makes it an easy recommendation to Switch players and RPG fans alike.

Xenoblade Chronicles Definitive Edition was reviewed using a promotional code on Switch, as provided by the publisher. This review was based of our Xenoblade Chronicles 3D review on the New 3DS. Click here to learn more about Stevivor’s scoring scale.