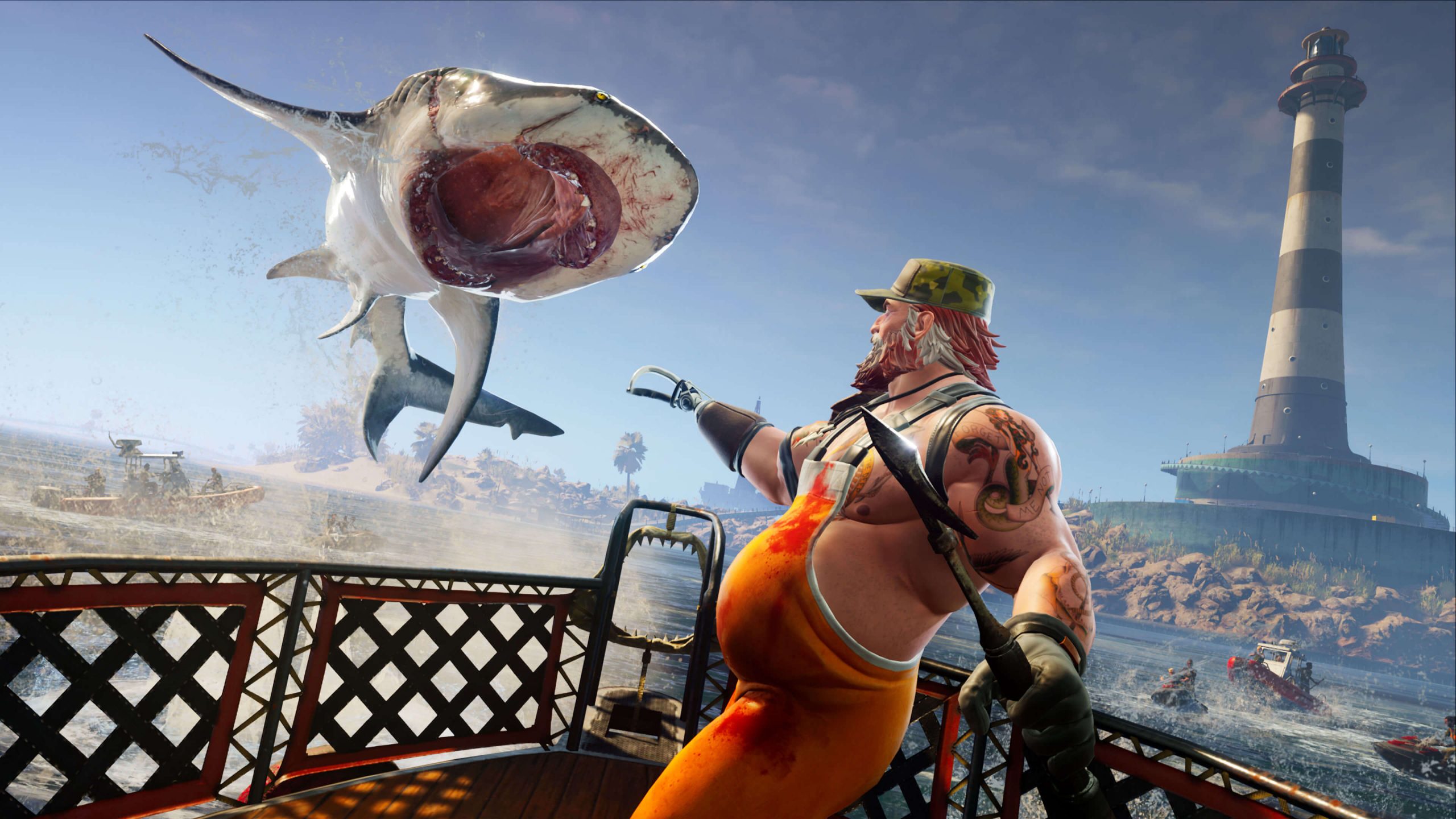 Maneater Review: All you crazy sharks c’mon jump around

Make you work hard, make you spend hard-- what? You don't have that song in your head now?

Maneater piqued my interest from the moment I heard about it, and finally getting my hands on it certainly didn’t disappoint.

I’ll be honest – I thought Maneater was as shallow as its name implied, a shark simulator that would let you rip into all manner of fauna be it from sea or land. My surprise came from the fact that there’s an actual narrative baked into the game’s core, as clever as it is steeped in black humour. While I wasn’t wrong, per se – Maneater relies upon a fun little gameplay loop similar to most shark games: eat lots, grow large, take over the ecosystem – it’s framed through a Dangerous Catch, documentary-style show where the shark would normally be the bad guy but pales in comparison to the human shark hunter who epitomises the scum of the earth.

You see, Scaly Pete kills sharks because he can, and opens events by killing a mommy shark, cutting its bull shark spawn from its belly, then scarring it to be able to identify later before releasing it to the wild.

As you’d likely expect, the documentary follows that baby shark (do doo do doo do do) — aka, you — on its path to revenge, maturing, evolving and mutating into the ultimate alpha beast. Said growth is required to take on Pete and devour the remaining bits he has left (you’ve already taken his arm, you see). To accomplish this, you’ll need to chomp on everything in sight – catfish, alligators and humans obviously; mutagen containers, landmark signs and oversized license plates less so.

Controls are rather simple – using a controller, your left trigger will give you a speed boost (though skimming on the top of the water lets you go even faster), the RB will help you dodge attacks from human hunters or large prey, the LB will perform a tail whip to stun or damage enemies, and the right trigger will move the bull shark’s jaw. With those basic tenets in mind, you move through the water eating anything you can. As you grow larger, you’ll learn new tricks like propelling yourself into the air like a dolphin, rolling out of the jaws of a croc or even mauling your prey.

While it’s easy to get into the mindset of a shark with these controls, we’re not privy to its internal monologue; it’s here that SNL, Archer and 30 Rock star Chris Parnell comes in, equally serving the role as the documentary’s narrator and the shark’s inner voice. While he’s funny as all hell, some of the flavour commentary he provides gets very repetitive, very quickly. Unique bits of voice acting with each landmark and major story point balance this out, thankfully.

Your shark’s age and size are represented by levels, and enemies carry the same identifiers above their head. At a moment’s notice, you’ll know if you’ll be competitive against a nearby alligator, and different areas of the world are also gated, Metroidvania-style, to sharks of higher evolutions. As you increase in mass and explore new regions, you’ll see that each has its own story to tell, from polluted messes controlled by the mafia (with mugs wearing concrete shoes and all) to backwater bayous. The various locations tell a story almost as compelling as your shark’s quest for revenge, and it’s almost sad when you encounter a region boss; it’s after besting them that you know you’ll move onto a new locale.

While combat itself is fun in spurts, it can get samey and repetitve; worse yet, you usually feel like you’re playing like a n00b in a fighting game, mashing buttons and hoping you’re jumping out of the water and latching onto a hunter in a boat before splashing into the water. A lock-on system exists, but I couldn’t ever get it to work in the way I wanted, and that occasionally meant a alligator would kick my butt because I was focusing on a Grouper instead of it… or, sometimes, on the alligator when I meant to snack on the Grouper to gain some much-needed health. Thankfully, an upgrade, enhancements and mutation system attempts to balance out some of those problems, letting you grow your shark to a playstyle that suits you (and your faults).

While Maneater is certainly a title that works for me in terms of its humour and an engaging core gameplay loop, its graphic nature means it’s not gallioing to be for everyone. If you don’t mine a little gore — okay, make that a lot of gore — this unique experience should be right up your alley.

Maneater was reviewed using a promotional code on Windows PC via the Epic Games Store, as provided by the publisher. Click here to learn more about Stevivor’s scoring scale.