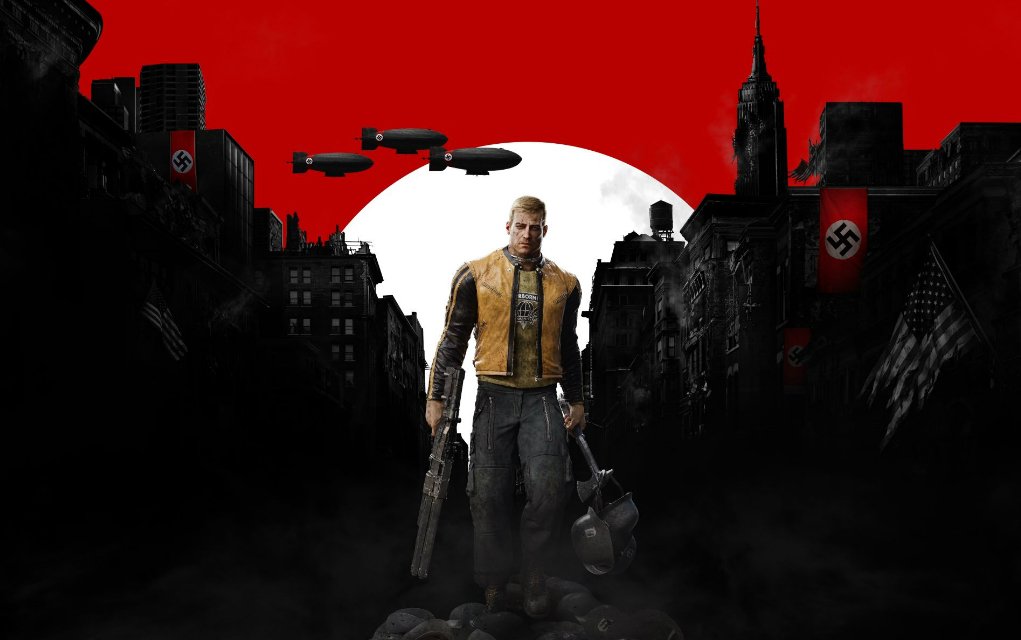 ... through the darkest timeline.

Improving on The New Order while raising the stakes at the same time may seem like a daunting task, but Wolfenstein II: The New Colossus manages to do exactly that. This is impressive on its own, but developer MachineGames doesn’t stop there, expertly walking the line between comedic zaniness and the seriousness of the horrific Nazi regime.

Its story is one of The New Colossus‘ many strengths. Apart from a few slightly cringe-worthy stumbles during some flashback scenes, the narrative itself is fantastic; a crazy ride from beginning to end with an incredible sense of resolution. That said, the real magic is found in its tone — The New Colossus bounces between outrageous action sequences with crazy characters just having fun to monstrous acts of Nazi cruelty.

Things are somehow kept light when they should be dark as all hell. With the help of incredible pacing, the game proves itself as an action-packed roller-coaster with everything on the line, still somehow managing to pay respect to the events of World War II.

Music further cements the sense of urgency and general bad-assery found in gameplay, but it’s when a score kicks in halfway through a cutscene that you’ll sit up and take notice. It’s clear that the growing cast of characters aren’t afraid of the bad guys and they plan to show them just that; your own chest swells with pride and hope as those of your team do on-screen.

The stolen U-boat from The New Order acts as a hub for you to plan missions and interact with others in your resistance. Your crew is made up of some returning characters, as well as many new faces that you pick up along the way. It’s not just heroes that return from the previous Wolfenstein game — Frau Engel confirms her place as the big bad of the game in its opening mission. And she is so, so good at being bad.

Right at the start of The New Colossus, you’re asked to make a big choice that will have a huge impact upon your playthrough. The choice dictates your timeline and offers you a special weapon; conversely, it entices you to run through a second time to see how events could have panned out.

The New Colossus offers two main ways to play: stealthily and not so stealthily. Stealth can be fun at times, but personally, I much prefer to run around double-fisting giant riffles and blowing away anything that gets too close. My favourite thing to do was set off all the alarms in an area and find myself a nice choke point to hold down, gunning down every enemy stupid enough to run over a pile of their dead comrades to try and get me. It should be noted that laughing maniacally is mandatory when using this technique.

Most of the action goes down across the Nazi-occupied bizarro USA. It may all be (mostly) in the same country, but the scenery completely changes from state to state and keeps things fresh during each mission. Around the halfway point in the story, things start to open up a bit and provide options to go on side-quests to hunt down extra-evil Nazis; it also offers new tech that’ll help you kill baddies. These extra missions, unfortunately, reuse the same areas you will have been through during the campaign but it’s still nice to be able to explore a little more and get some extra use out of these crazy locations.

Perks are gained simply through playing a certain way; if you like using two guns at once, you’ll gain a perk that grants more ammo from doing just that. It’s super simple and reinforces the idea that you can play the game how you want.

Exploring the hub between missions will open up more side-quests from talking to NPCs and gives a nice perspective on how these people spend their downtime when they aren’t out stomping Nazis. As neat as some of the side-quests are, they reuse maps in a way that sometimes feels cheap. Most of these interactions are either busy work to show you a new game mechanic or something for pure comedic value and depending on the choice you made before the game there could be a whole lot of acid trips.  If you’re more retro-inclined you’ll probably want to hang out in club Kreisau and play Wolfstone 3D, an old school shooter with a surprisingly familiar protagonist.

My only complaint after hours of gameplay is that heavy weapons are excruciatingly difficult to quickly pick up off the ground. For some reason, it felt like you have to fail to pick up a gun a few times before you’re allowed to grab it. I eventually realised that I needed to be much more intentional when picking up the big guns and I started getting killed while grabbing a weapon a lot less.

The New Colossus is batsh*t crazy. Once he gets going, B.J. feels like a freight train that is impossible to stop or even slow down. There is a scene just before the finale that perfectly sums up the insanity of this game, but I won’t be spoiling the fun. I am sure, though, that we’ll all be talking about it shortly. Though its subject matter was heavy, I had an incredibly fun time playing Wolfenstein II: The New Colossus. I can’t wait to see where the series goes from here.

Wolfenstein 2: The New Colossus was reviewed using a promotional code on PS4 and Switch, as provided by the publisher. Click here to learn more about Stevivor’s scoring scale.