Nathan Drake or not, Naughty Dog can make as many Uncharted games as it wants to.

Originally conceived as a piece of DLC for Uncharted 4: A Thief’s End – and the franchise’s first-ever story-based piece at that — The Lost Legacy grew large enough to warrant its own release. Set after the events of Nathan Drake’s last adventure, this new epic focuses on Chloe Frazer, a friend of Nate who first appeared in Uncharted 2. Together with Uncharted 4 antagonist Nadine Ross, the pair unite to find priceless treasure and save their own skins. A general sense of saving the day is thrown in there too, though not at the same scale of Drake’s adventures.

An action-packed adventure, The Lost Legacy is about the backstories of both Frazer and Ross as it is about trekking across the globe in search of loot. Like it or not, Frazer spends The Lost Legacy following in the shadow of her father. Ross, ousted from her family-owned private military organisation, seeks to re-establish herself. While the pair respect each other and share common goals, it doesn’t mean they’re necessarily friends. 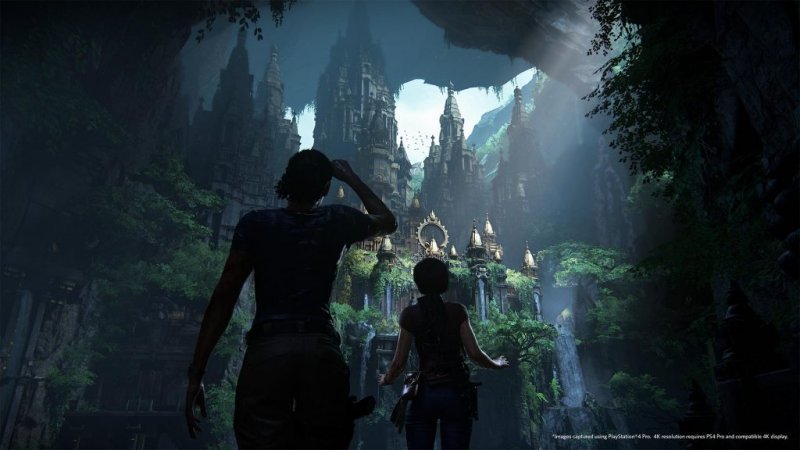 A standalone expansion of A Thief’s End, control schemes and game mechanics are largely wholly the same. A third-person shooter, players will control Chloe as the climbs, leaps, fires weapons and throws punches. A grappling hook proves useful with traversal, combat and puzzles, allowing access to vantage points, sniping spots and elusive treasure. The only real addition is the jeep that makes an appearance in the first level, the Western Ghats. It’s incredibly important, as the level represents the largest ever made for an Uncharted game.

While The Lost Legacy has an obvious narrative focus, you can diverge from this regularly, searching for picturesque vistas to reflect upon, treasures to gather or groups of enemies to eliminate, either stealthily or with guns blazing. In the Western Ghats, I found myself driving Chloe and Nadine around in the jeep just to listen to interactions between the pair. Diversions are quite important to The Lost Legacy; it’s an 8-10 hour adventure, even going off the beaten path. Compared to previous Uncharteds, this seems like a miniscule offering… but sometimes too much padding is just too much padding, eh?

Combat is rewarding, with aggressive enemy AI determined to stop Chloe. Nadine’s no slouch either, preferring close-quarters combat and causing sprays of blood wherever she treads. Stealth is possible in most situations, but I found myself a bumbling mess, constantly – and clumsily — throwing myself into situations. As I progressed, I got much better at turning one state to the other, taking out a nearby group of baddies to use their bodies as bait as I stalked my remaining opponents. 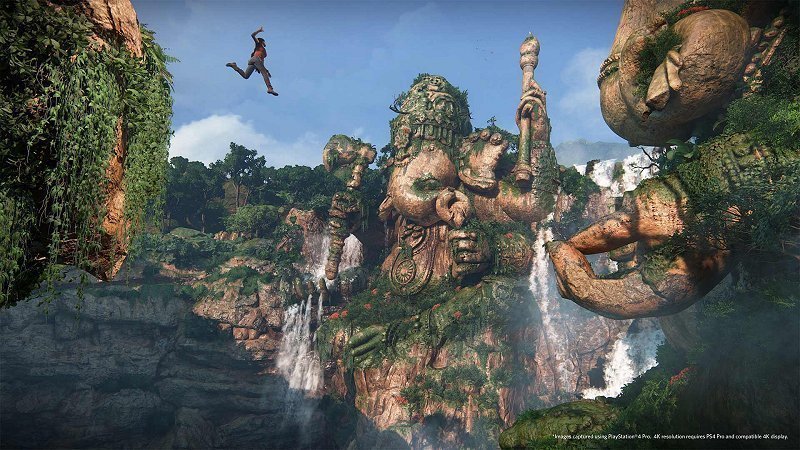 Though combat is rewarding, I was most impressed with a plethora of The Lost Legacy’s puzzles. These can range from large, mandatory efforts that you’ll need to complete to progress to smaller, hidden installations that lead to rewards like Hoysala Tokens. You’ll need a clever mind to solve some situations, and in other, fast reflexes. They’re worth going off the beaten path to find and best.

The Lost Legacy isn’t fully removed from Uncharted 4; the pair share a multiplayer system that’s been given new content thanks to the likes of Chloe and Nadine. It’s decent enough, but the beauty of Uncharted has always been a story-driven, action-packed campaign, not a deathmatch. I’m as apathetic to the game’s antagonist, Asav; forgettable like most of Uncharted’s foes – Nadine now an exception —  he serves his purpose.

Uncharted was inspired by the likes of Lara Croft in Tomb Raider, taking Eidos’ concept and adding in blockbuster storytelling. While this new iteration mightn’t influence other titles or franchises like Drake has, it’s nonetheless amazing to play an Uncharted game with a strong heroine with a nose for relics, a pistol in hand, hair tied back in a ponytail and no need for help from the likes of Drake or Sully. The Lost Legacy is a great little addition to the franchise, ideal for newcomers or fans alike.

Uncharted: The Lost Legacy was reviewed using a promotional code on PS4, as provided by the publisher. Click here to learn more about Stevivor’s scoring scale.