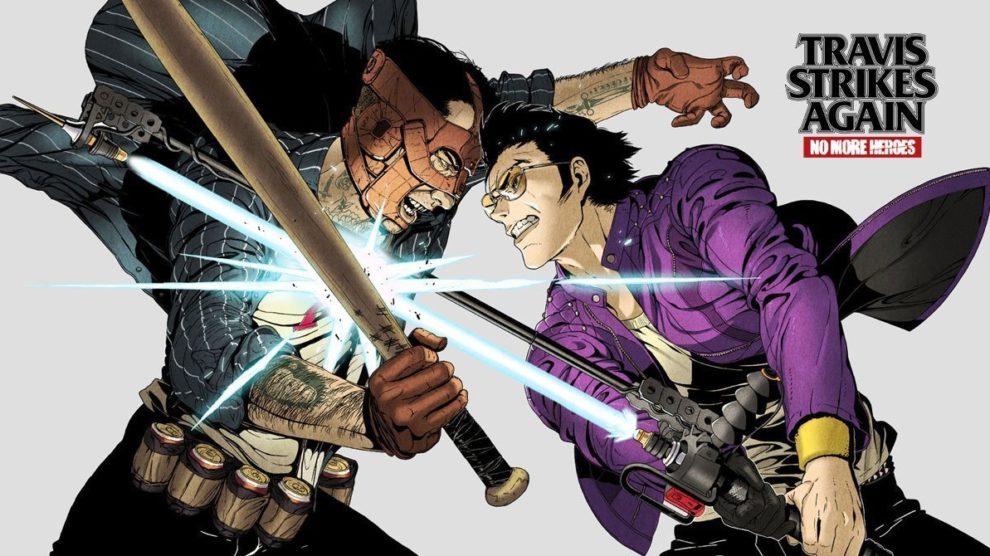 Suda51 is an interesting character who creates unusual games. In the cases of Killer7, and No More Heroes that’s a good thing; with Travis Strikes Again No More Heroes, it is not.

Travis Strikes Again is Suda51 heading back to basics, leading a small team at Grasshopper Manufacture to create a side project that’s not a true sequel (hence, it’s not called No More Heroes 3). The result is a very Switch-like, almost mini-game-filled title that’s truly nonsensical. Now, I get it’s Suda we’re talking about here, but nonetheless, I found myself playing through Travis Strikes Again as if it were a chore rather than any fun at all.

Travis Strikes Again is full of forced self-referential humour reminiscent of Sunset Overdrive — it may work for you, but I wasn’t overly keen on it. I mean, I collected a bloody Unreal Engine logo collectible an hour or so into the game after its opening painfully proclaimed it ran on the engine, singing its praises. Until you play through some of the game and unlock a different shirt, you’ll find protagonist Travis Touchdown sports an Unreal Engine t-shirt. Why? Because video games, that’s why! 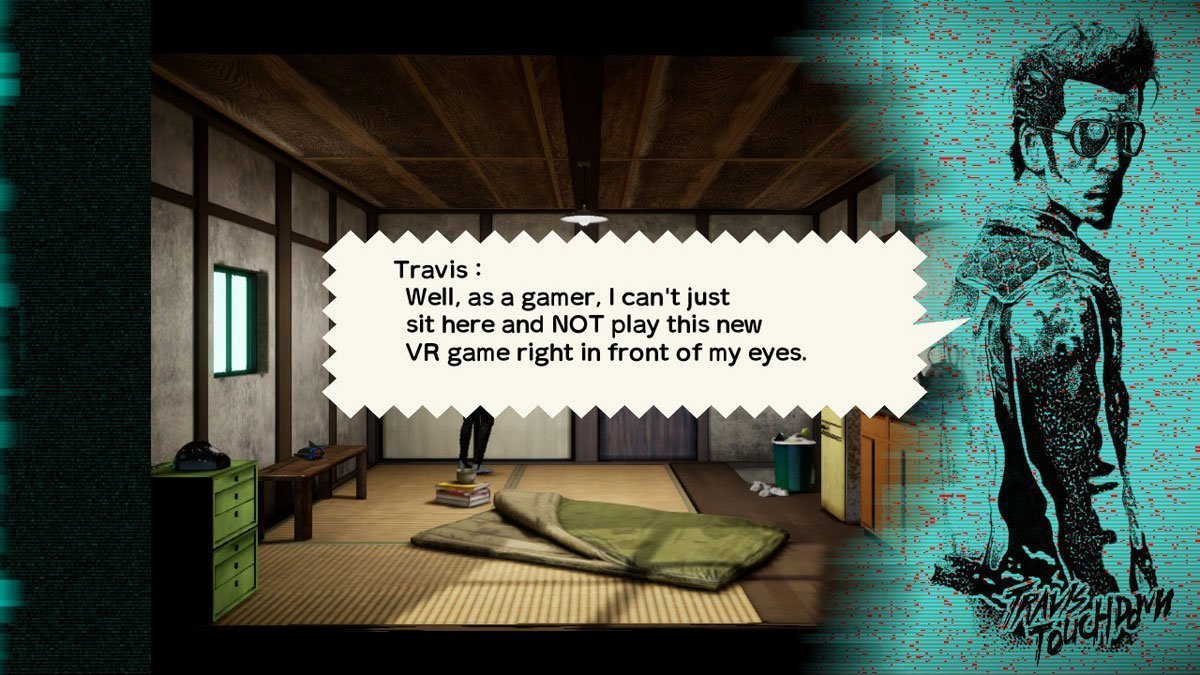 The entire premise of Travis Strikes Back is simple: the father of an enemy killed by Touchdown tracks our favourite assassin down and plans to kill him in revenge. Then, um, you instead decide to work together and enter video games in order to kill their endbosses. I dunno. Each video game — a Death Ball, specifically — features a different theme and corresponding levels. You’ll race Tron-like dragsters in one, run through a Resident Evil-like mansion in another, solve top-down puzzles in a third and even revisit past games from Suda51’s catalogue (and more, but we won’t spoil the surprises).

It’s a quaint idea, but I soon found that these unique game worlds are half-baked and drawn out to the point where they become tedious. I know they’re meant to be reminiscent of games of old, but sometimes that replication goes too far. As an example, you’ll find yourself on a single, linear road near the beginning of the game, finding it sectioned off with force-fields that require you to eliminate all enemies before continuing on. While it might be a subtle dig at Final Fantasy XIII, it’s still boring nonetheless.

The racing game was kind of fun, but a big component of it — shifting gears via a Shift Box — is randomised. Unless you’ve got crazy reflexes, I found myself purposefully restarting a race to get a better roll. On top of this, the racing world is just one instance where you’re set up to blunder in order to progress the story. At times, I wasn’t sure if I was about to fail due to a lack of skill or because the game was forcing that state down my throat. It wasn’t ideal. 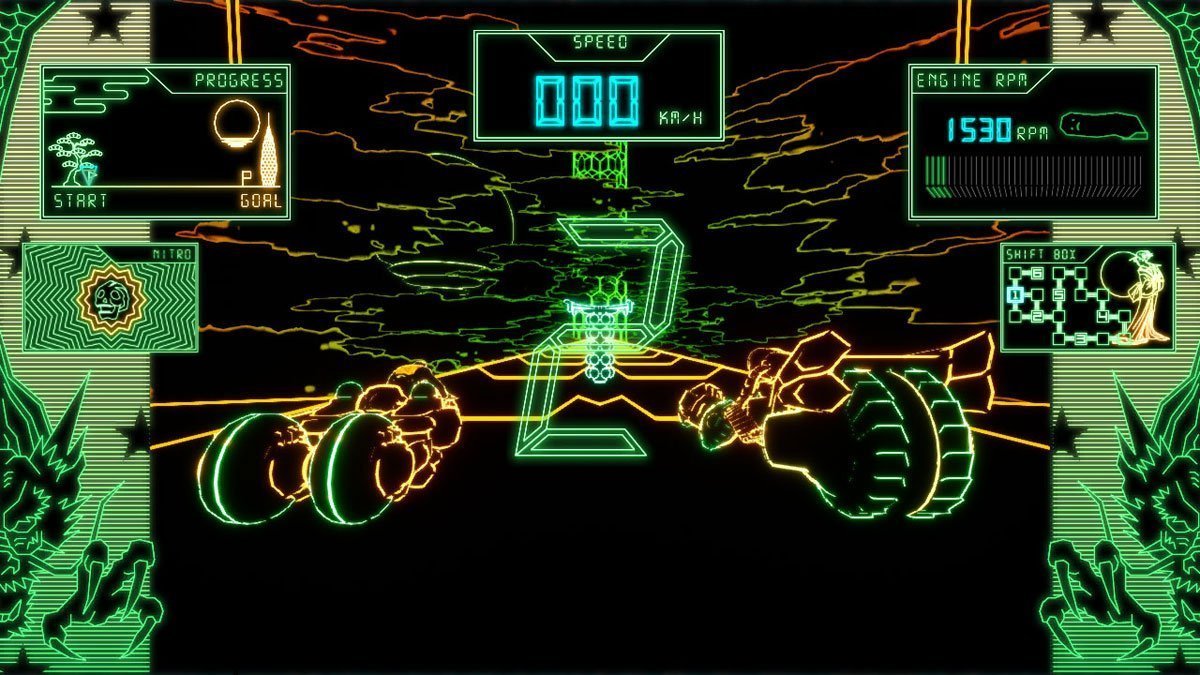 While the structure and narrative — oh, I’ve yet to mention that you need to hold down the B button while a weird, long, text-based adventure plays out so you can enter the next Death Ball — are disappointing, combat is thankfully not. It’s a relatively simple system: you’ve a dodge, a light and heavy attack and the ability to jump (and launch into different attacks while in the air). On top of this are a couple special moves, each triggered with the L button and a face button, and a final super move that’s triggered by the R button alongside (sadly) some Joy-Con waggle, regardless of Joy-Con, Pro Controller or handheld mode. My only complaint with controls is that I wish I could remap L and R controls to LZ and RZ, especially on handheld mode; those little bumpers are sometimes hard to hit properly.

Touchdown’s beam katana is back and will need to be recharged during combat. This is achieved by clicking in the left stick and waggling the right… if you can manage it. More often than not, I found that Travis would start walking around a level rather than remaining in one place gaining power back. Ignoring the annoyance, it’s a clever little requirement that adds a ton of strategy to proceedings; do you risk recharging your beam katana all at once, leaving yourself open to attacks, or do you dodge and recharge in single spurts to keep your health up? There’s no right answer.

On easy mode, combat can be a challenge when it comes to endbosses; on difficulties higher than that, you’ll really need to plan ahead. Or you can half-ass it and bring a friend along — the introduction of Travis’ antagonist, Badman (seriously) means the game supports two-player co-op. I didn’t get the chance to use it much, but it seems solid and enjoyable. The only problem with the functionality, really, is that far too much of the screen is used up by 2-player UI, regardless of whether or not you’re in co-op. Travis Strikes Again is essentially a square, 4:3 ratio with the UI in place rather than a modern 16:9 presentation. 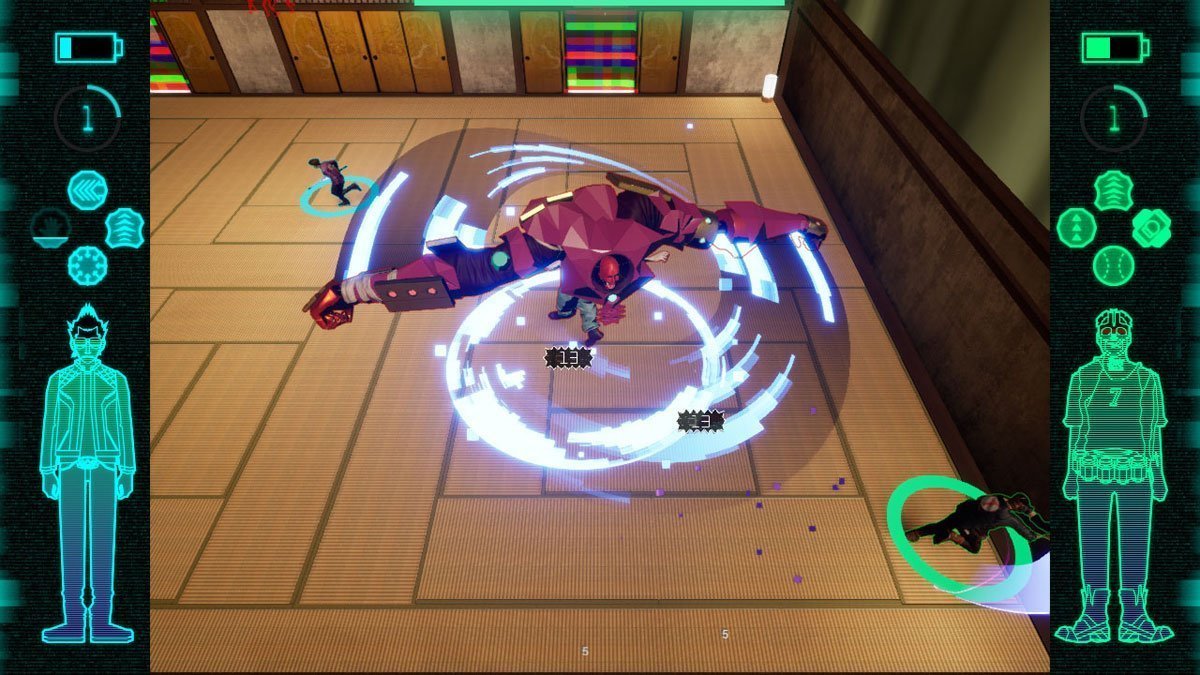 Travis Strikes Again: No More Heroes ultimately fails in its implementation of a quirky idea, and that’s a real shame because combat sequences — specifically bosses — are a real delight. If you can stomach (all) the filler, it’s a decent title to go and have a hit in. That said, I’d much prefer a proper No More Heroes 3, Grasshopper.

Travis Strikes Again: No More Heroes was reviewed using a promotional code on Switch, as provided by the publisher. Click here to learn more about Stevivor’s scoring scale.