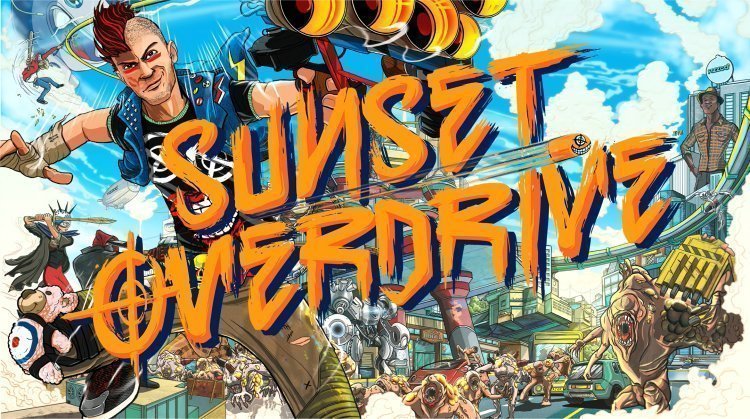 Insomniac was desperate to have me hate Sunset Overdrive, it seems.

The game – as if you haven’t heard tons about it already – is a glorious cross between Jet Set Radio, Dead Rising and Tony Hawk. You basically can grind, bounce and boost off any surface in Sunset City, using ridiculous weaponry and costumes to take on any number of quirky enemies. The whole while, you’re encouraged to look cool doing so, amassing style points for exceptional moves. It should also be added that the game does all this in a gorgeous-looking setting that will never suffer any slow-down or frame rate issues despite a colossal amount of stuff happening on-screen.

On its own that would make for a damn good game. The problem is, Insomniac did its damndest to get in the way of that.

The question needs to be asked: just what was Insomniac trying to do with Overdrive? I honestly don’t know. I don’t think Insomniac is sure of the answer either. They’re like this popular meme, which I’ve altered to really drive the point home.

Sunset Overdrive is a try-hard. It thinks it’s young, hip and clever by ‘cheekily’ pointing out it knows it’s a video game. Like Eat Lead: The Return of Matt Hazard before it, Overdrive thinks it’s hilarious when it acknowledges tired and old video game conventions and tropes, then saying how dumb they are.

And then making you go and follow through said tired old trope. Seriously?

I shuddered each time the game tried to do this, thinking it had stumbled onto comedy gold. “Oh, if only I was a character in a video game,” my character said TO THE CAMERA. “Then I could go into a menu and equip this new thing I have!” Shortly after, my character commented that they surely didn’t have to go and follow an in-game NPC because they didn’t have a quest marker over their head.

“It’s like Sunset City was built expressly for me to bounce and grind all over it,” my character said later on. “Funny how that worked out.”

The game references NeoGAF near the end of its story. Why? I’m sure Insomniac would reply with, “Why not, more like it!” After all, this is the studio that awards an Achievement for unlocking your first Achievement in the game. How meta.

The worst bit is, after all these tremendously try-hard, way too in-your-face references, the game brings a real-life ‘celebrity’ into the game. That is, I assumed he was a celebrity because of the way he was being treated. I had no idea who the dude was, and was forced to pause the game and hit up Wikipedia to figure it out. Trust Overdrive to go from ramming stuff down your throat to the most obscure reference ever.

Let’s just put it this way: I made my character look like a hipster ironically, just because the game was trying so hard to convince me it was cool with the strategy of trying NOT to try to convince me it was cool. Or something; it just felt like the right thing to do. On the plus side, the game’s character creation tools are neato. Notice the Jet Set Radio-themed headphones, above.

Overdrive seems to tone itself down after a couple hours, but it’s still annoying as hell and all kinds of wrong. Story missions follow in this weird path of trying to forge a quirky, edgy personality for the game and just end up being annoying, not to mention poorly designed. The fact is, Sunset Overdrive’s at its best when you’re given the keys to the kingdom and can do whatever you’d like.

When subtle, Overdrive is cute and funny. There are many respawn animations that refer to various pop culture properties, doing so without the need to wave them around in your face. If they were a part of the campaign, you’d have the Player – yep, that’s a capital there cause that’s his or her name — yelling “HEY! THIS IS A REFERENCE TO STAR TREK AND THE LAST ONE WAS BILL & TED’s EXCELLENT ADVENTURE!”

The same goes for swearing. The last boss says ‘fuck’ so many times that I ended up just turning the game’s volume down. Swearing for the sake of swearing is something kids do when they’re 14 and have just been made aware of the words. It’s certainly not edgy.

When you’re able to just go and play in Sunset Overdrive, you’ll have a grand old time. I spent many joyous hours after slogging through the main story just traversing, gathering some of the (admittedly way too many) collectibles and building up weaponry. Side-quests aren’t nearly as painful as main story missions, and even though the game’s supporting characters suffer from the same ‘edgy’ identity issues as the game itself, they’re okay in small doses. Each of the game’s four friendly factions are way over-the-top, but mostly in that subtle way that you can appreciate. It’s over-the-top à la Dead Rising in that sense more than the in-your-face way I grew to despise.

I was only able to find one Chaos Squad multiplayer game in the pre-release time I had with the game, but it’s a fun little take on tower defence. You’ll get a small taste of what to expect with the mode in the single-player campaign itself. It’s all about careful trap placement and powering around a map to ensure you’re mopping up baddies before they get to your objectives.

Combat isn’t really of Overdrive’s strongest suits, sadly. You’re encouraged at every single moment of the game to continue moving, shooting anything that gets in your way. Problem is, you’re moving, enemies are all around you shooting back while moving too, and you’re spinning the camera around to see what’s going on. It’s hard to shoot stuff that way. My tried-and-true combat trick was to find something to bounce on and just shoot from there, ground pounding anyone who was stupid enough to get under me. It got boring quickly, but it was super effective.

Sunset Overdrive is a game that has all the polish in the world, but still needed more. It attempts a lot of things and does most of them satisfactorily. General gameplay is fun and comes highly recommended, but everything that Insomniac does to try to give the title an identity brings the whole package down. You might be able to avoid some of that stupidity by turning your volume down and subtitles off while playing, but who really wants to do that?

In-game, Sunset TV broadcasts for us early review folk asked that we didn’t refer to the game as Sunset Overhype. That’s easy, then; I’ll call this game Sunset Overdone. You’ve got a decent base here, Insomniac; a great game that’s fun to play when you don’t get in the way. Don’t over-compensate next time and we’ll all be laughing.

Sunset Overdrive was reviewed using a promotional copy of the game on Xbox One, as provided by the publisher.