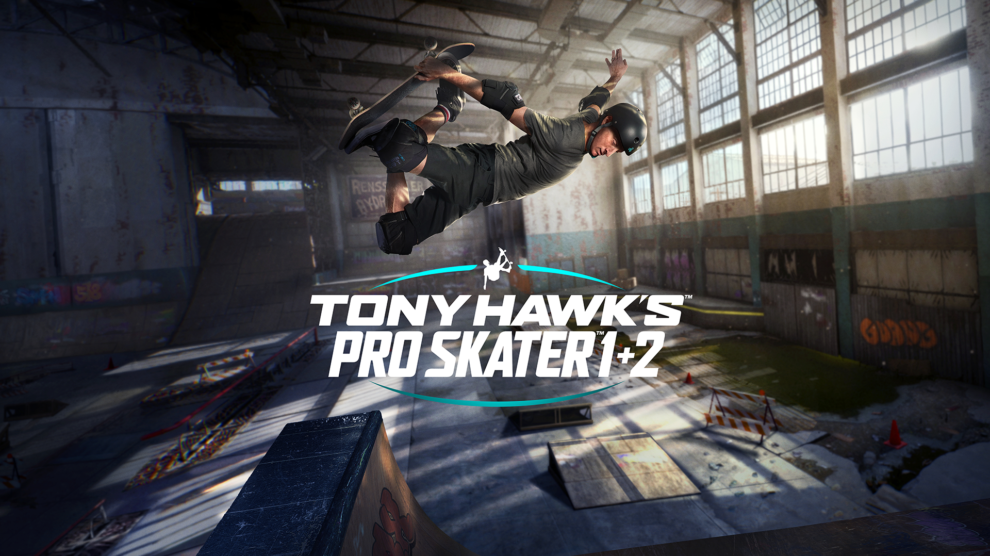 The original Tony Hawk’s Pro Skater title was released 21 years ago, so there will be plenty of people out there who have no idea what the title is all about (nor why it was such a cornerstone of gaming in the 90s and early 2000s). Far from a skating simulator, THPS tasks players with a checklist of challenges consisting of performing tricks to get high scores, breaking things and picking up various series collectibles over a number of different levels.

Each individual task must be completed in a single round lasting only two minutes resulting in a lot of repetition, trial and error and restarting. Effectively, it’s hunting collectibles on a skateboard. Throw in some three-round competition levels to mix things up and there’s your game. It’s really that simple. While infuriating at times, THPS was a lot like actual skating: you’d get better at either the more hours you put into it.

Tony Hawk’s Pro Skater 1 + 2 is essentially the same thing. After all, it’s a remake, so it would be quite easy to just refer you to an old review of the original titles encompassed in this release. It’s all there — the School, Hangar, Shopping Mall and more — each recreated perfectly, though of course with much more detail and polish. Some areas have been given facelifts to keep things fresh such as the aforementioned shopping mall is now abandoned and there’s some new hidden areas to find but this is by and large the same game. It is therefore equally as good as it was 21 years ago. But with such an accurate recreation comes the same flaws. 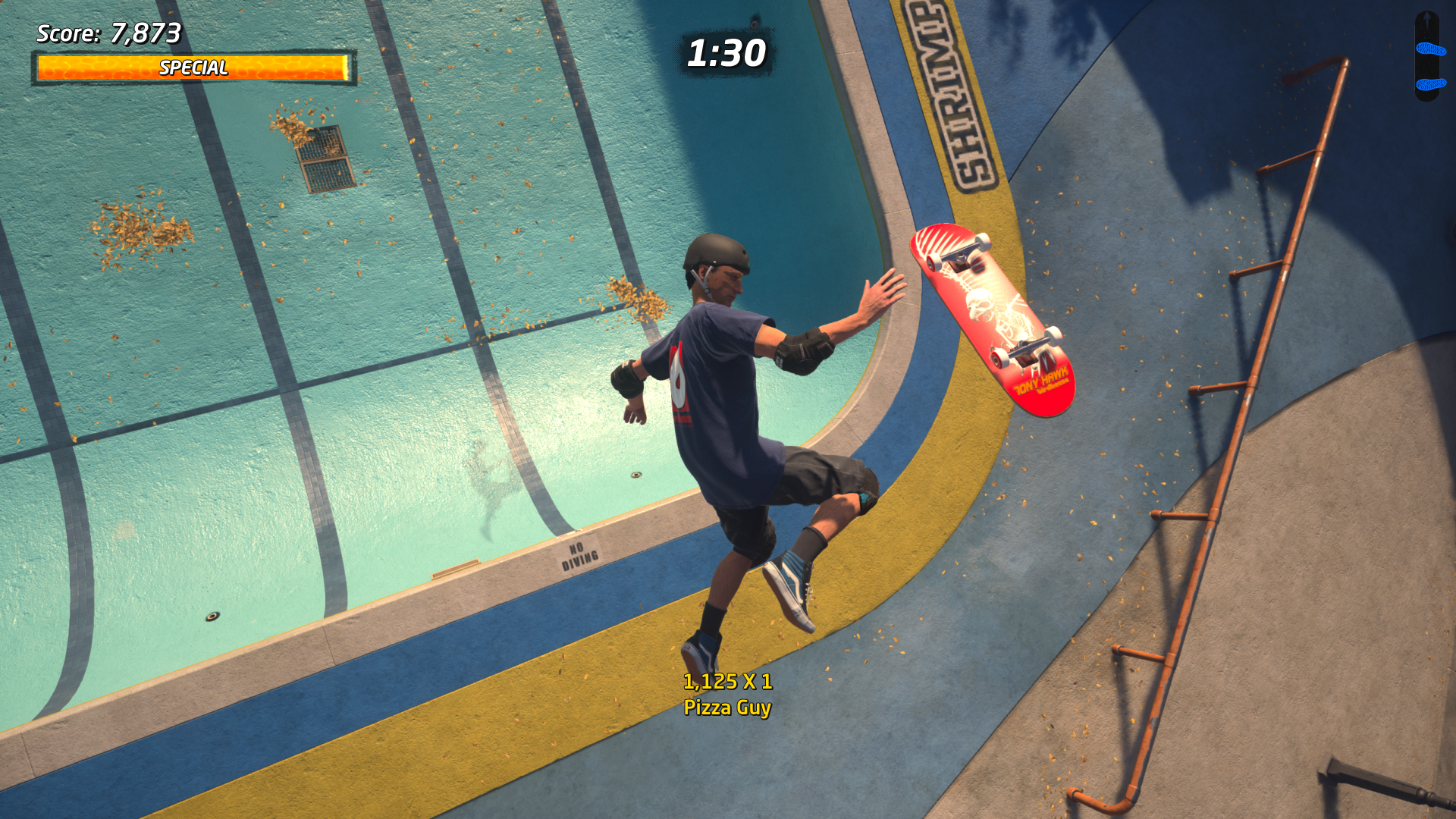 This is nothing major. Some levels stand out as significantly less fun to play than others. (I’m looking at you Minneapolis and New York). While there’s something to be said for such accurate recreations, these levels are large, flat and do little more than show their age. I doubt many would have been upset if these were modified slightly to make them a little more fun. Once they’ve been completed there’s no need to return to them.

Of course there’s new features such as more customisation options for your character like branded clothing, boards, grip tapes, trucks and even axles. In addition, more than seven hundred different challenges are available to complete alongside a primary level’s goals which will definitely entice the completionists out there. The biggest change is of course the multiplayer component as the original games were released at a time when online console gaming wasn’t a thing. 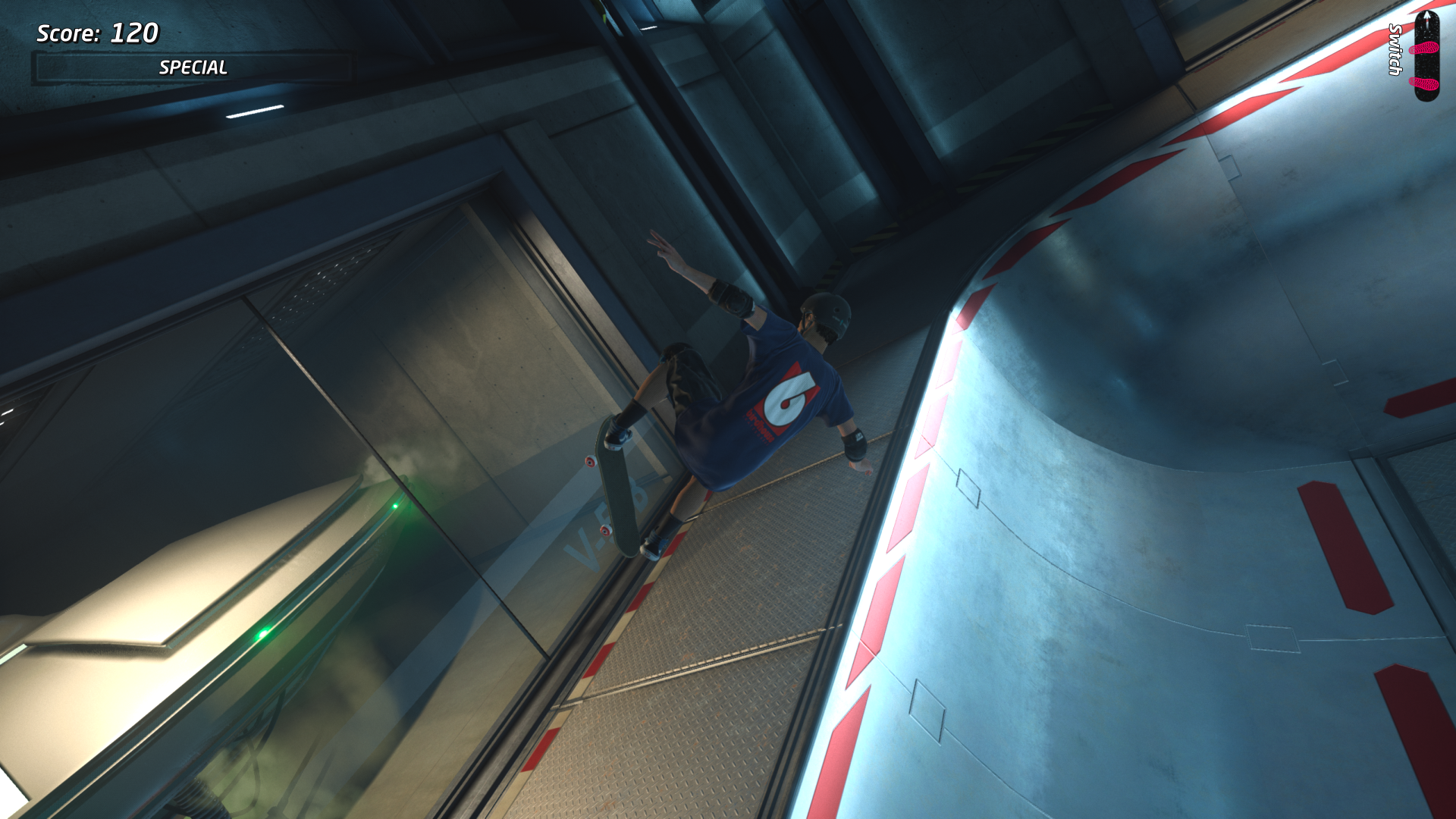 Multiplayer is a fairly standard affair, with the quickstart option offering up a variety of game modes that all basically feel the same. You’ll play through modes like Combo Mambo, Score Attack and more — and despite the change in name, they all just want you to rack up the highest combo possible in the shortest amount of time. Some modes will finish in twenty seconds (especially if you’re playing with a dev pre-release like we were), while others require far more time to hit objectives. Regardless, you’ll play a handful of modes on the same map, so the downtime in between can be used to practice and get better at the locale you’ll continue within.

By far, Graffiti is the best mode of the lot, offering up a bit of variety in that you need to stake claim to a specific piece of a map. The person with the highest score earned on that section tags it, with the objective to tag the most pieces of the level in an alloted time. It’s a delicate balance of finding spots that other skaters aren’t in to nab some easy points, or heading off to populated areas to pull off some great combo chains.

In summary thusfar: there certainly are upgrades to the original games to make things more modern, but those additions are far from mind-blowing or left of field. That’s by no means a bad thing, but the big question is, will THPS 1+2 scratch that nostalgic itch? Indulge me if you will. 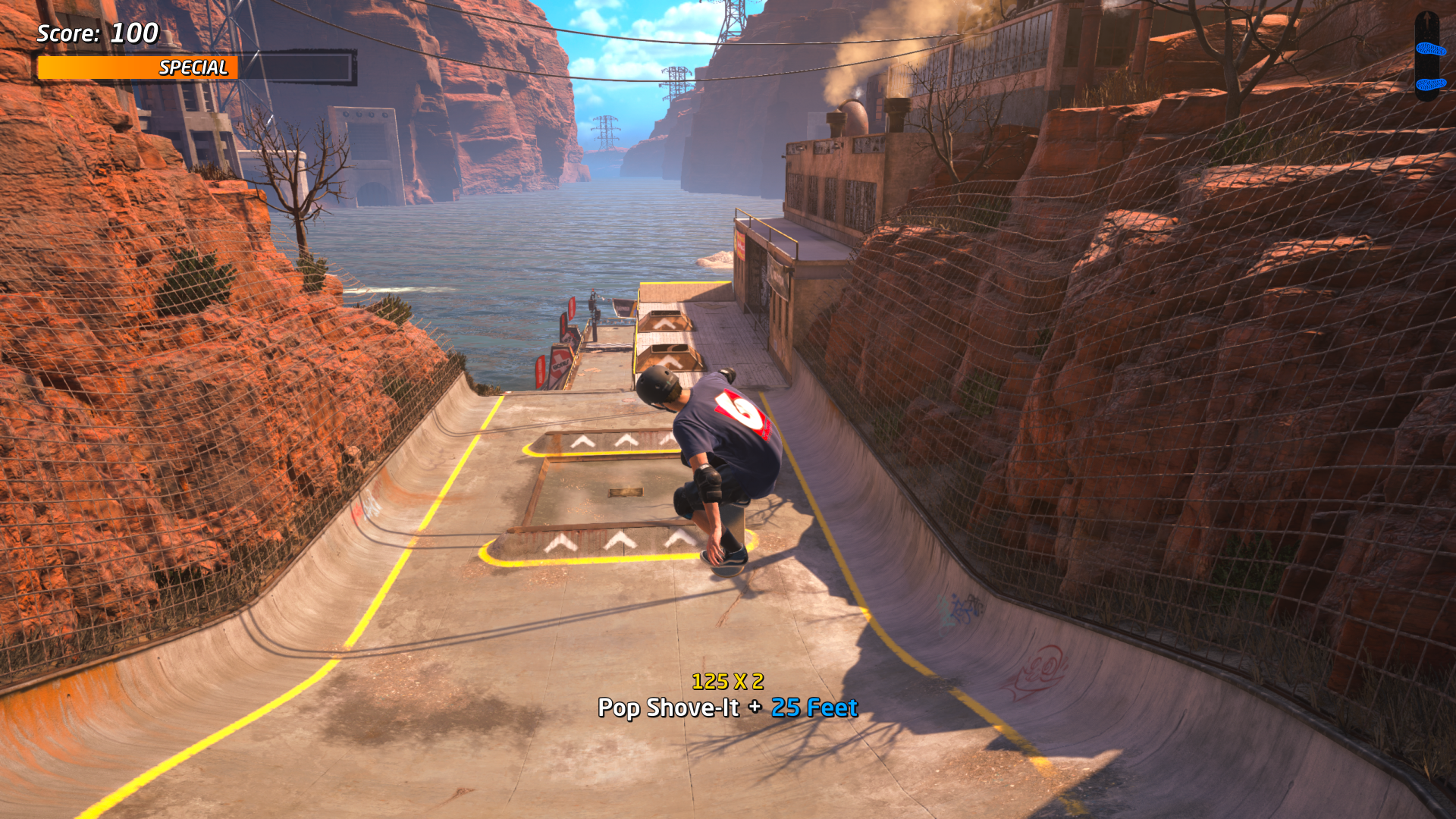 I never learned to skate. The closest I got to performing an ollie was standing on my stationary skateboard and jumping in the air while all four wheels stayed firmly on the ground. I pretty much gave up on skating at that point. But the challenge of the original Tony Hawk Pro Skater games was something I never gave up on. These easy to learn, difficult to master games remain a highlight of my earlier gaming years. While I never owned a PS1, countless hours with the Bird Man were spent at my best friends house and it was during that time that I became a pro at Tony Hawk. Nailing single combos in the tens of millions of points with ease, completing all of a level’s challenges in a single run without breaking a sweat (and pissing off my mate for completing his game before him).

In light of this I went into this year’s remake expecting that distant muscle memory to kick in instantly and I would once again dominate this game; I thought I was going to be in my element. Oh how wrong I was, and for a number of reasons. Firstly, while my muscle memory is certainly there and the control layout and responsiveness of THPS mimics the original titles, my now 38-year-old hands no longer have the dexterity of my former 17-year-old self.

Secondly, when I first started playing I found myself unable to land even the most basic of tricks and combos. Ol’ mate Hawk was slow, couldn’t get the air time I was accustomed to and his kick flips seemed to take forever to execute. Then it dawned on me, I wasn’t playing with maxed out characters anymore. Like the original games, each skater starts with certain stats. Collecting further stat points around the various levels enables you to increase the stats on a number of attributes and thus making your character more proficient, or dare I say it, making the game more fun. 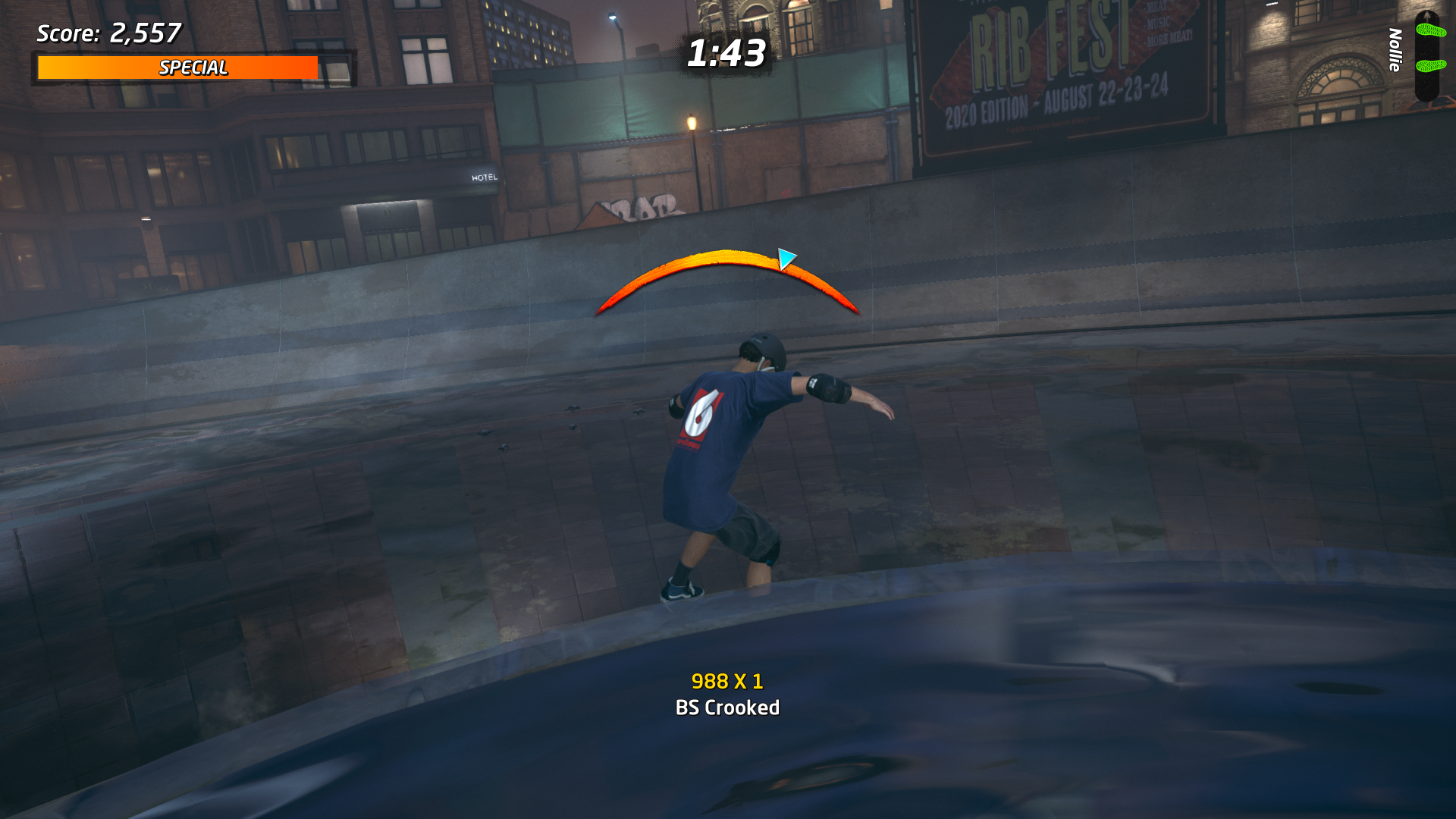 I admit it’s certainly not fair to criticise a game because I wasn’t an immediate expert at it after wiping off two decades worth of dust, so I once again remind you that I’m commenting on personal nostalgia here. Tony Hawk veterans should anticipate the need to re-learn how to play, especially when it comes to the more advanced aspects of the game.

On the positive side through, the soundtrack is as good as it’s ever been. Few games of that era had such iconic background music. It played a big role in influencing my taste in music as a kid and the majority of the songs from the original games therefore still show up in my usual music rotation. But for those that may have forgotten what it’s like to skate through Area 51 with Power Man 5000, Millencollin or Primus shaking your ear drums are sure to have some great memories flooding back.

I’ve had a tumultuous relationship with remakes of old video games. Wipeout and Spyro showed their age and should have been left as fond memories. Instead, they brought to light how far video games have come over the years and offered little more than an hour’s worth of nostalgia before they were set aside. Oddworld: New and Tasty on the other hand was a beautiful upgrade to a game that was well ahead of it’s time. Tony Hawk Pro Skater 1 + 2 is somewhere in between.

As a recreation it highlights how good the original games were for their time. Challenging, original, addictive and damn fun to play. If you’re in your 30s, it’s absolutely worth a trip down memory lane. If you were born after the original games were released, give it a crack, even if only for the opportunity to experience some quality video game history. You’ll probably find you’ve been working on a perfect line or combo for a few hours before you realise it.