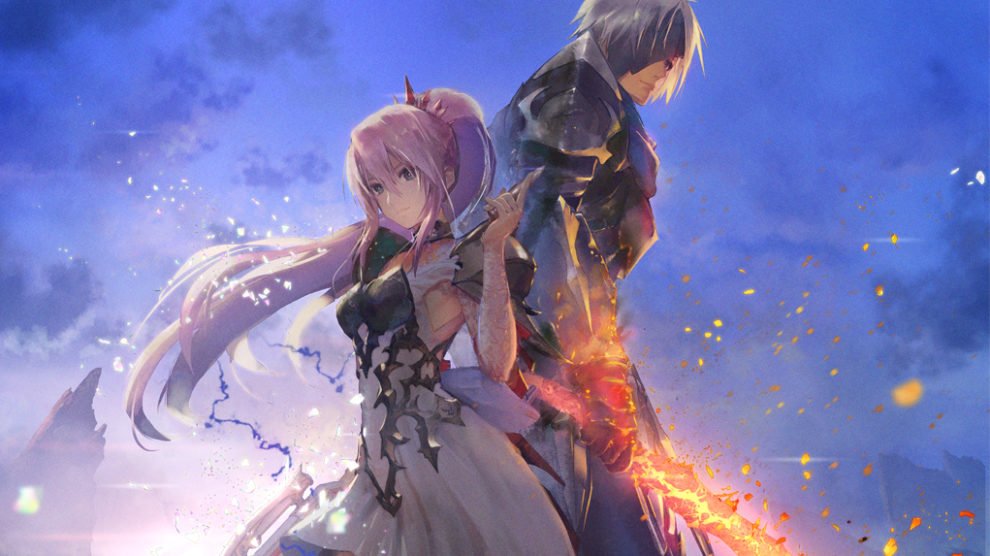 See what we did there?

In the past year, like many people I’ve been spending more time indoors – who could say why. In this time, I’ve found myself much more in the groove of the RPG grind than ever before. There’s something relaxing, almost meditative about the gameplay loop of RPG combat that’s really clicked with me in a way it hasn’t for a while, and I’ve spent many an inside day hitting things to make the numbers go up. With a strong feeling I’ll have a bit more indoors time to fill in 2021, it’s a blessing that the latest Tales series game from Bandai Namco has dropped – Tales of Arise, the franchise’s first foray into the newest generation of consoles.

Like almost all Tales games, Arise takes place on an all-new world – or rather, pair of worlds. Our story begins on the binary planets of Rena and Dahna, where an invasion three hundred years earlier by the technologically superior Renans left the entire Dahnan race subjugated into slavery. With the world of Dahna divided into five realms overseen by five Renan lords, the populace are put to work to harvest the five types of elemental energy of the planet for their rulers – earth, fire, wind, water and (not heart) light.

Everything kicks off with the chance meeting of our two protagonists in the fiery realm of Calaglia. An amnesiac slave in an iron mask chooses to help a Renan woman under attack by soldiers, and before you know it we have a plot underway! The iron-masked man, Alphen, has no sense of pain – the woman, Shionne, is cursed to cause awful pain to anyone who touches her. One thing they do have in common is a desire to tear down the system of subjugation in place on Dahna, though each has their own reasons for doing so.

Playing through this game, there is a sense that there’s been a shift in the intent behind the series. Bandai Namco seem to have taken the jump to PS5/Xbox Series X to not only switch to Unreal Engine 4 from their internal engine, but also reassess the tone of the game. The story broaches topics like racial bias, cultural guilt and the challenges of breaking down an ingrained caste system in a society – in between fighting monsters with a sword made out of magic fire.

While high-concept ideas like tackling an oppressive regime are commonplace in JRPG titles especially, Tales of Arise seems intent to dive deeper than just surface thoughts on the matter. The main story of the game gives equal focus to the character narrative for all six of your party members, each with their own unique journey and perspective on the state of their worlds.  Japanese media can sometimes miss the mark on these kind of topics – lord knows I’ve seen enough cringe-worthy representations of queer people in this genre to last me a lifetime – but Arise seems well-considered and thoughtful on these topics. 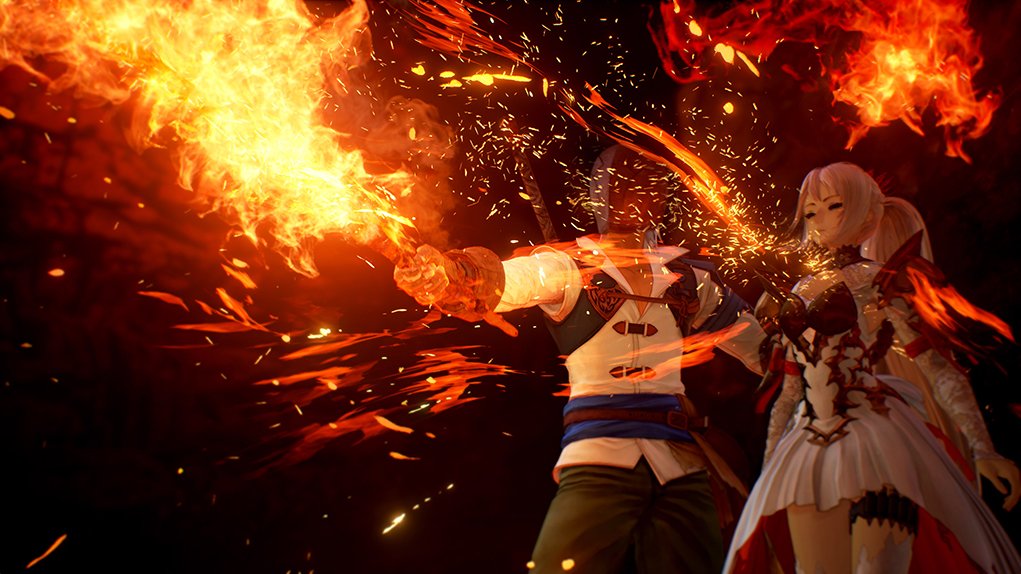 On top of these wider themes of the game, it’s clear that some fresh blood has been involved in the writing of the game’s scenes. Your party especially speak to each other with a kind of emotional intelligence you don’t often see in games! While characters do butt heads, they’re also quick to respect each other’s boundaries, openly discuss topics like anxiety, and communicate and apologise openly when they’ve hurt each other, intentionally or no. It’s a refreshing thing to see in any game, and makes the cast feel more human and relatable.

Moving on from feelings, let’s talk violence. The combat system in Tales of Arise is slightly simplified compared to previous titles like 2017’s Tales of Berseria, though it works to the game’s benefit. Where previous titles have had complex combo paths for your party’s various skills, branching dependant on the order they’re used in, Arise pares this back. Players can assign various combat skills to three of the four face buttons (with the fourth reserved for jumping), and the ability to unlock a second trio of shortcuts when holding down the left trigger. Our protagonist Alphen can also use special skills using his fiery Blazing Sword by holding down the face button after a skill, activating a powerful strike that can be boosted by burning some of his remaining health.

Each party also has their own unique “Boost Attack”, a kind of ultimate skill that charges up during combat. Each of these attacks has a different utility in combat, and even those of party members not in the current fight can be used; one staggers enemies briefly, while others can knock down flying enemies, cancel spells being cast by the enemy, or stop a charging foe dead in their tracks. While it can be a bit overwhelming at first, activating these Boost Attacks eventually becomes second nature and when utilised correctly makes you feel unstoppable in combat. A change has also been made to healing, as restorative magic is now powered by a shared pool of “Cure Points” for the party that is only recharged by stopping at an inn or campfire. 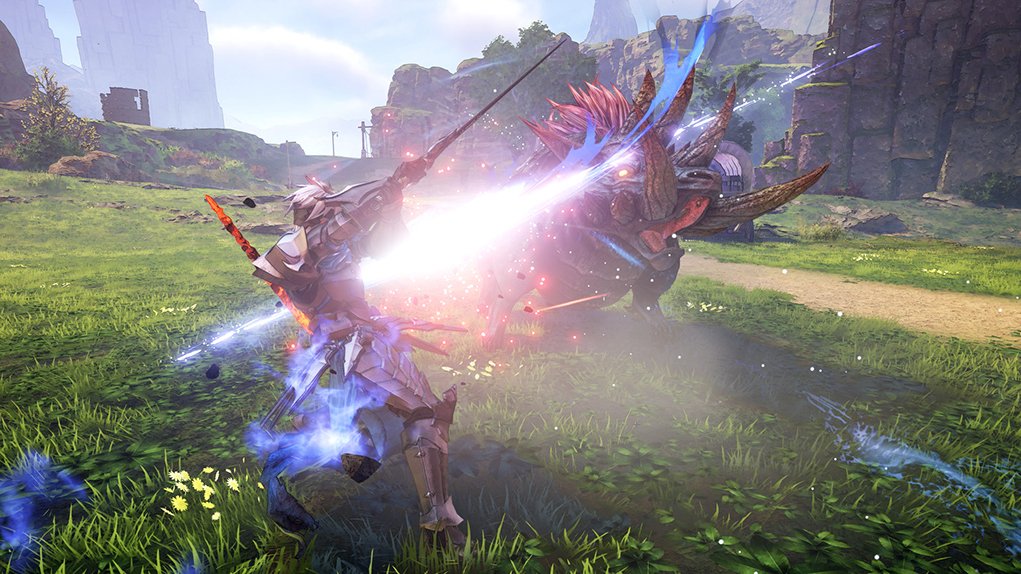 These points are use donly for healing, not your offensive magic, and act as a kind of limiter to just how long you can slog through a dungeon. Generally I found you would encounter a campfire just as you needed it, and having your whole CP pool drained in one fight is a sign you might not be ready just yet for that area. It’s a mechanic I haven’t seen before in these kinds of games, but I did enjoy it – not having to sacrifice offensive magic for healing (or vice versa) makes it feel much more practical to heal whenever you need it.

The visual jump from the PS4 era of Tales games to Arise is also quite striking (no doubt backed by the upgrade to Unreal Engine), and rich lighting and particle effects abound in this game. The colour palette used in the game’s various realms is also deeper, leaning away from the much more technicolour nature of past titles. This is by no means a grimdark, brown game of course – many areas are still vibrant, but the game isn’t afraid to go dark when it’s warranted. Each new town and dungeon is visually distinct, making crossing from one realm to the next an exciting surprise. Character animations are more fluid and human, thanks to the face and body motion capture the studio utilised.

Every fight is a visual overload of overlapping spells, abilities and effects as your party dash about and shout out the names of their moves. It can be a lot to take in – my partner watched me fight a thirty-second battle only turn to me confusedly and say, “What exactly just happened?” – but you get into the rhythm of the various sound and visual cues soon enough. Every fight I had on my PS5 ended with the last attack in glorious, 60fps slow-motion which never STOPS making you feel cool. 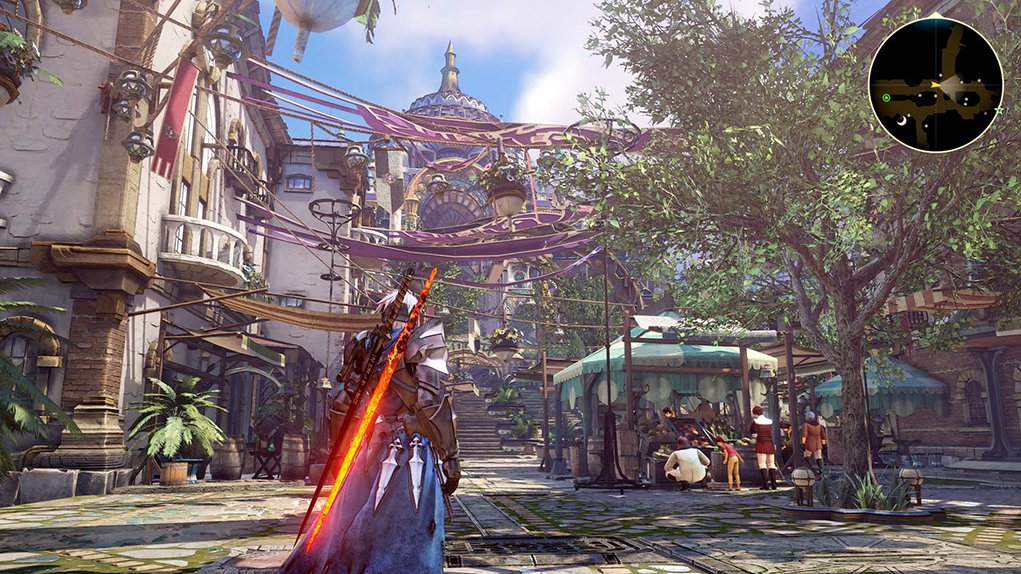 I was also surprised to find that in combat, this game made great use of the haptic feedback of the PS5’s controller too. For your two-person finisher moves, great attention was put in to finesse the vibrations – one of these moves has two party members sprint forward and double-slash your enemy, and the sensation almost felt like they were running up my controller to do so. It’s a small thing, but felt really good – very promising for what’s possible on this new system.

As much as I loved the game, I did find issue with the translation to an extent. While the spoken dialogue has been localised brilliantly (I never expected to hear the phrase, “This town seems legit peaceful” in a Japanese game), there is some mismatch between the audio and onscreen conversation at times. While this is understandable, as voice actors will sometimes deliver their lines differently to make them sound more natural, I found that in some of the secondary content the two would be completely different.

Much more noticeable were the grammatical (and occasional spelling) errors in the written script, both for cutscene subtitles and onscreen dialogue. These errors persisted throughout the game, start to finish, and often enough to be noticeable. I realise it’s not the end of the world to use “where” instead of “we’re”,  but I’m hopeful that early patches to the game post-launch will remedy this so that this part of the game can be as polished as the rest.

If this is anything to go off, the series has years left in it yet. This title makes it clear that the folks at Bandai Namco have it in them to move with the times, without losing the essence of what a Tales game is. You’re still going to collect recipes for stat boosts, you’ll still have some form of cute animal companion, and there’s still going to be speeches about destiny and doing the right thing – but we’re also going to respect each other’s mental health and look absolutely gorgeous doing it.

With a new mobile Tales game in the works already, I can’t wait to see what comes next – but for now, I’ll be enjoying myself with Alphen and co. for a few dozen hours yet. Tales of Arise heads to Windows PC, Xbox One, Xbox Series S, Xbox Series X, PS4 and PS5 on 10 September.

Tales of Arise was reviewed using a promotional code on PS5, as provided by the publisher. Click here to learn more about Stevivor’s scoring scale.