It’s like Bomberman, but each player only needs half a controller and it’s having a laugh with the price tag; that’s Super Bomberman R for Nintendo Switch. Likely to be the most popular optional launch title – because everyone with a Switch right now has The Legend of Zelda: Breath of the Wild – Super Bomberman R provides some quality multiplayer mayhem. It takes full advantage of the Switch’s unique control scheme, with local multiplayer support for up to eight players – I struggle to find anything suitable for even four players on PS4 and Xbox One.

That said, it’s only practical to play with up to four players. Super Bomberman R supports one or two players in story mode and four or eight players in battle mode (with COMs making up the numbers if required); there’s nothing in the middle, so you need eight Joy-Cons, and there’s no reason to have bought three additional pairs yet. Still, the lunacy of 8-player Bomberman isn’t a complete loss, as it’s theoretically fully supported online. We say “theoretically” because with such a small audience, we haven’t been able to thoroughly test online play, and have struggled to find matches. Still, if you know eight people with a Switch, you can go old school and play locally over wifi, each with your own console. 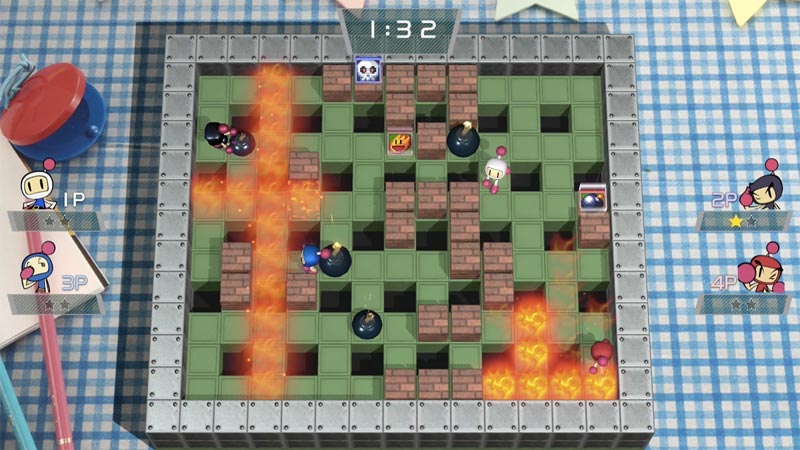 Like its predecessors, which have been oddly dormant of late, Super Bomberman R isn’t worth your time if you’re looking for another solo experience to cosy up next to Zelda. There is a single-payer mode, and it suits short burst gameplay during the work commute, but it just isn’t very fun. The joy of Bomerman stems from the unpredictability and self-annihilation only possible with the irrational behaviour derived from panic by real players. In the single or two-player “story” mode, and while the art work is pretty, it’s a generous description, gameplay becomes mundane. Minions follow predictable paths and bosses don’t make errant mistakes. You have to conclusively trap them, and while that makes for a fair challenge, Bomberman is best when players simply make mistakes.

Co-op makes story mode a little more enjoyable, but it doesn’t bolster the repetitive gameplay. Enemies range from plodders to excitable clingers, but the 50 stages progress extremely quickly. You can choose to go back and play on a harder difficulty, but it’s still either eliminating all enemies or hitting some switches to progress to the next level, without the compulsion of multiplayer.

Local multiplayer is much better, and the reason to play Super Bomberman R. It works great with a single Joy-Con in horizontal mode, and the control latency issues we experienced prior to launch seem to be resolved (it’s not entirely clear if this was part of the Joy-Con disconnecting issue or a separate problem with Bomberman, but it sees like they were related). You can also choose to play with a Pro Controller or using the Joy-Con grip with four or less players. 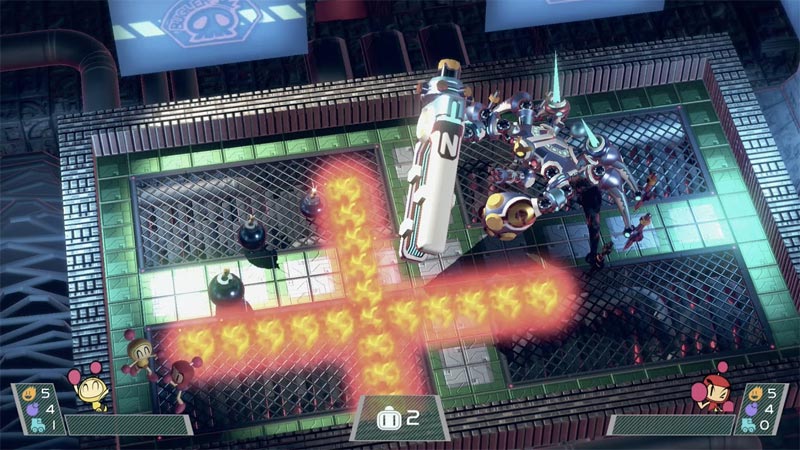 Gameplay closely follows the conventions established in Bomberman’s prime during the 16-bit era, which saw a resurgence following the release of Bomberman ’93 on Wii Virtual Console – it was one of the best and most popular multiplayer games on Wii. You know how it works; run around a grid littered with obstacles and power-ups, dropping bombs that explode in straight lines across the X and Y axis Nothing has changed — if it ain’t broke, don’t fix it — and even the 3D art style is reminiscent of where Bomberman left off six years ago (the last game was Bomberman Live: Battlefest on Xbox 360 in 2010).

There are eight maps available from the outset with another 12 to unlock from the in-game “shop” with coins earned from playing through the campaign. In excellence news, there isn’t a skerrick of tainted microtransactions to be seen – all unlocks have to be purchased by playing the game, not throwing down additional real life cash. I like that.

As a local multiplayer centric game, Super Bomberman R works best in TV mode, with a single Joy-Con assigned to each player. However, since there’s no splitscreen like Mario Kart 8 Deluxe, it actually works pretty well in tabletop mode. SBR can more than adequately be played with two or four players huddled around a Switch, if you can figure out the seating logistics. Handheld mode also works fine for single-player, for the small amount of time it deserves. 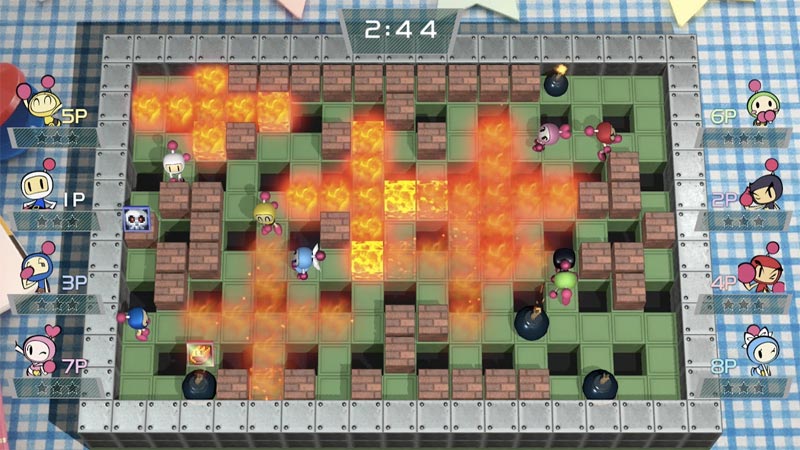 The problem with Super Bomberman R, as a fun but limited local multiplayer game you’ve played many times before, is its hefty price tag. At $65 on the eShop and RRP $90 in stores (the reason for that discrepancy isn’t clear), it’s almost impossible to recommend picking it up now. Bomberman R provides quality multiplayer, but it’s the same thing you’ve been playing for decades; it’s good fun, but we’d hardly call it “Super”. Snipperclips provides a similarly addictive multiplayer experience for a fraction of the cost ($30) and is an entirely new experience. That’s the price range Super Bomberman R should have been in, and probably where you’ll find it in a couple of months, especially once Mario Kart 8 Deluxe dominates the full-price multiplayer market. Still, Super Bomberman R is better value, and a much better game, than 1-2-Switch.

Super Bomberman R is basic Bomberman. There’s nothing here you haven’t seen before, but it’s still great fun with simple, chaotic local multiplayer after all these years, even if it is extremely overpriced.