Home » Reviews » Star Wars Jedi Fallen Order Review: The Force is strong with this one 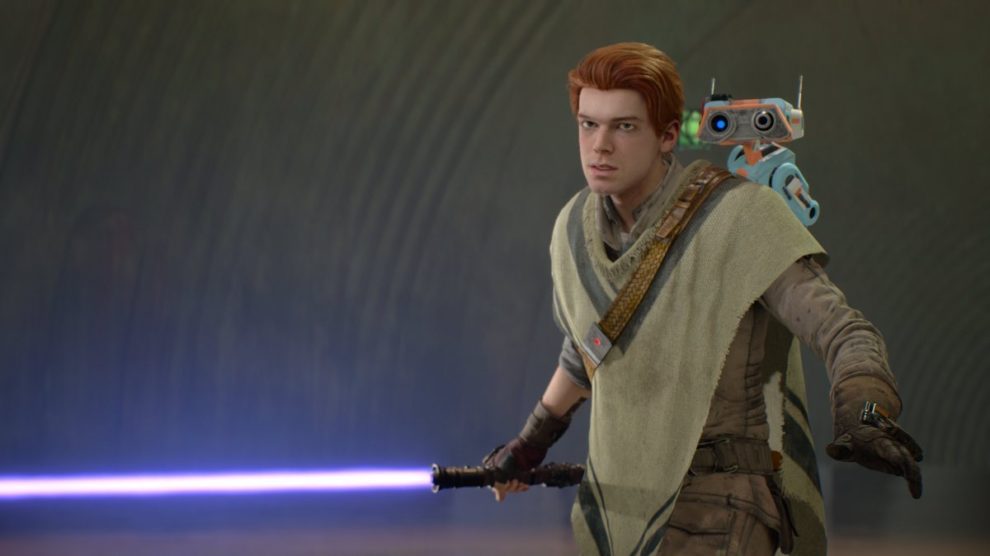 It’s been too long since we last learnt to use the force in a galaxy far, far away. Since gaining the rights shortly after Disney’s acquisition of LucasFilm, and the subsequent disbandment of LucasArts, EA has taken a slow — not very steady — approach to Star Wars; with a heavy emphasis on multiplayer, despite fans crying out for a fully fledged campaign. As we approach the end of the Skywalker Saga, Respawn Entertainment has finally delivered the single-player game a console generation in the making with Star Wars Jedi Fallen Order.

It returns to a favourite era of game adaptations, the two decades between Episodes III and IV, where there is plenty of scope for stories to tell. Whilst it may look similar to previous Star Wars games, it takes a unique approach to learning the ways of the Jedi by following several blueprints of action/adventure/melee leading franchises to ensure it gets it right. 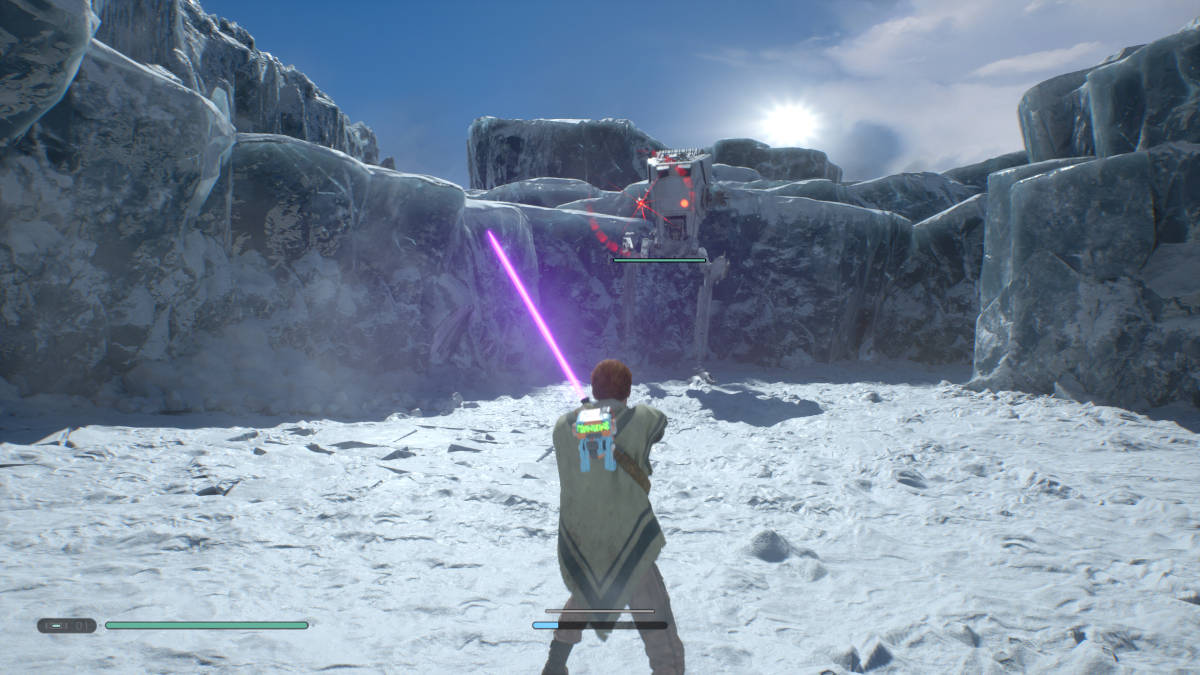 Previews ran rampant with declarations Fallen Order is a Souls game as if that was the end of the story; if you’re not a fan of FromSoftware, don’t take that as discouragement. Whilst combat is undeniably inspired by Souls, its implementation harmonises into the Star Wars universe and plight of an underprepared Jedi smoothly. More importantly, it’s only part of the parcel. This is a quality B-side Star Wars narrative inspired by Metroid and Uncharted just as much as Dark Souls; with a healthy dose of Titanfall 2’s excellent wall-running and nods to its own strong campaign.

Respawn has stuck to the known path, closely following proven examples of the gameplay traits it is mirroring — it’s almost impossible to discuss gameplay without referencing those three pioneering franchises. But in doing so, it has crafted something that feels familiar yet unique, especially in the context of Star Wars games.

Fallen Order presents one of the best original interactive Star Wars sagas. Set during the Jedi purge, started five years earlier with Order 66, you play as the delightful Cal Kestis, a former Jedi Padawan who has had to find gainful employment and keep his head down just to survive.

Cal only maintains a fleeting connection to the Force, having forgotten most of his incomplete Jedi training, and keeps it repressed to protect his former identity. However, when forced to call upon his abilities to save a friend, Cal is outed as a Jedi and pursued by the dark-side sensitive Second Sister, an inquisitor dispatched by the Empire to hunt down Jedi survivors; and so begins his quest to rebuild his connection to the Force and resurrect the fallen Jedi Order. 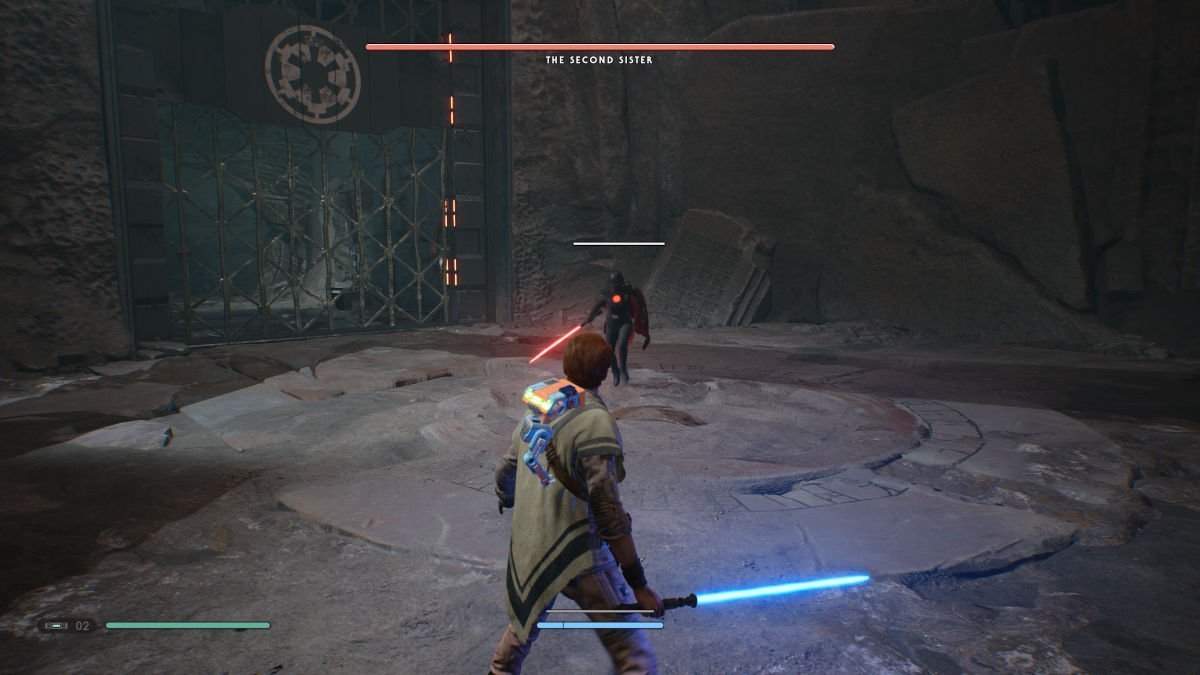 With the curious BD-1 by his side, or on his shoulder, it’s a story told as much through the burgeoning relationship of a boy and his puppy-like droid, as it is the expositive set pieces. While some of these intense scripted moments give Nathan Drake a run for his money, perhaps Lara Croft is a better comparison. Cal spends a lot more time raiding tombs than I expected; it’s a regular theme, used to present some generally well crafted, albeit fairly simple, platforming puzzles that serve to disrupt the regular encounters with the Empire’s minions.

Fallen Order doesn’t present a full open world, but it does an excellent job of making its linear paths feel wide open. Navigating the environments is a mixture of 3D platforming, wall-climbing, vine-swinging, zip-lining, wall-running and even a little downhill skating; Cal likes to slide his way down a sudden incline. It’s standard affair, but for the most part works together nicely, only offset by the odd ledge that Cal should be able to jump to, but can’t, and a camera that occasionally pans away at the critical moment; although, that’s more of an issue during combat.

There is no fast travel, the level design requires regular backtracking to reach new areas locked behind Force abilities, much like Metroid, or more recently Control. Having joined the crew of the gruff captain Greez, Cal travels between planets on his ship, the Mantis, each of which is a diverse level following established Star Wars tropes like snow, forest and the harsh interior of an Imperial base. 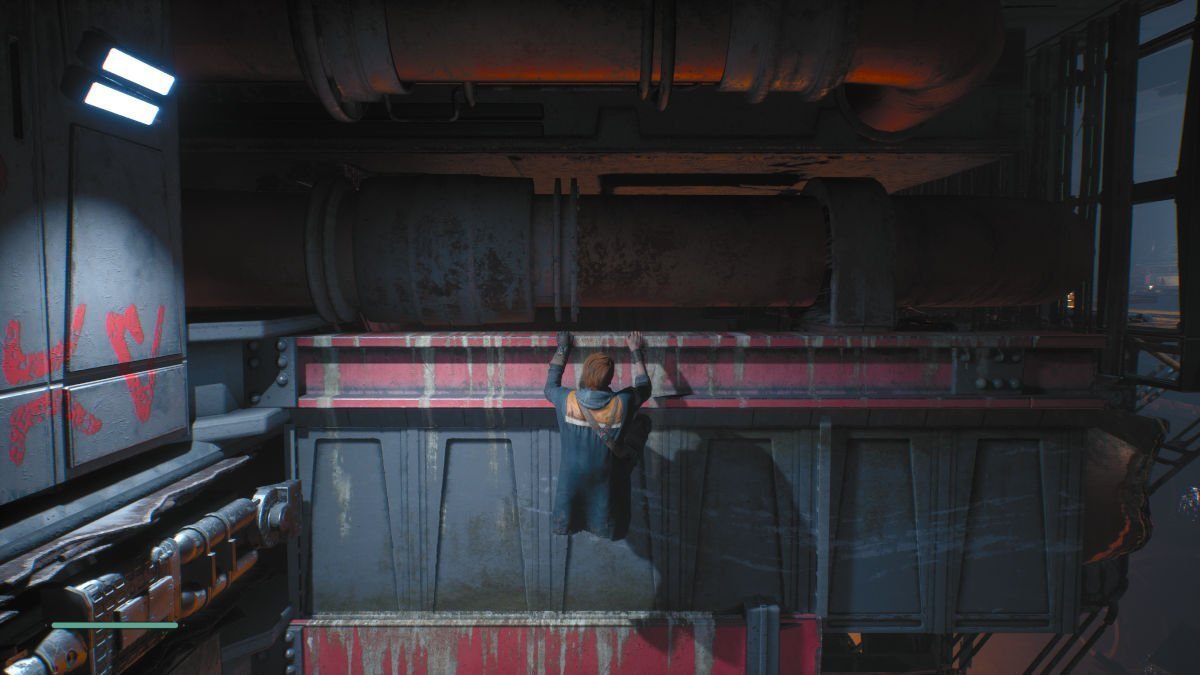 It’s up to you to remember to return to points of interest; there is no marker on BD-1’s map, aside from the main objective, and even that demands you make your own way there. Cal knows where he wants to go, but it’s up to you to figure out how to get there — and possible routes won’t display on the holo-map until nearby areas have been discovered.

In all honesty, it’s possible to push forward in roughly the right direction and you’ll eventually reach your destination, but that would be to do Fallen Order a disservice. There are few games that have captured the same sense of guided exploration of Metroid Prime, and this is one of them. It’s a satisfying accomplishment to wander off the beaten path and scan an item or find a collectible hidden in a corner that never needed to be found. It might be a series of fairly guided levels, and yet I found them more compelling to explore than most open world games.

Cal will often stumble across a Force echo, story tidbits that award XP, and chests that contain skins that are just out of reach, gated behind an ability he is yet to rekindle. Playing on the default difficulty, the main story clocks in at around 20-25 hours, but that will range from anywhere between 15-30; the two extremes of the scale ignoring all collectibles or backtracking to catch them all. It’s worth making the trek, even if fighting the same respawning enemies can become tiresome, as the extra XP unlocks new abilities on a skill tree split into Force, lightsaber and survival abilities. 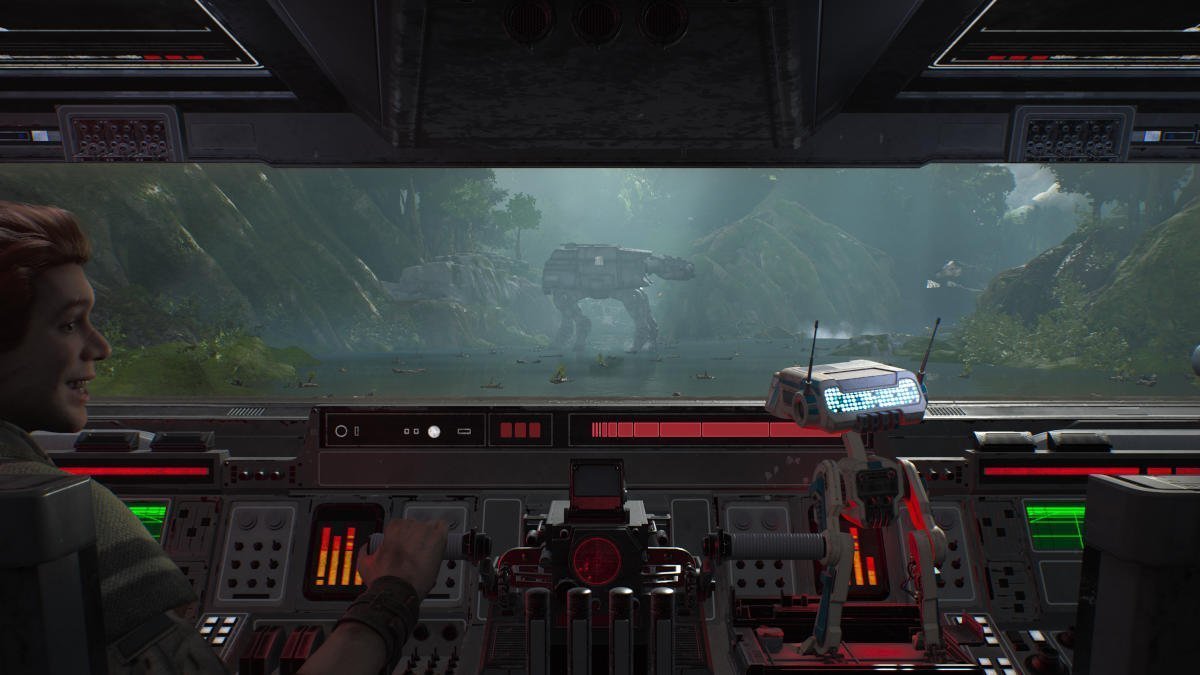 All the key powers — Force push, pull and slowdown, and manoeuvres like wall-running and double-jumping — are unlocked through the story, but there are enough new skills unlocked by XP to make scouring for echos worth your while. The lightsaber throw is a personal favourite, and every Jedi wants to send an entire group of stormtroopers flying to their demise in one fell swoop.

With death, all of Cal’s current XP yet to be converted into a skill point will temporarily be lost. He must damage the enemy who killed him to regain it after respawning at a meditation point, which is used to save progress and unlock new abilities. Choosing to rest at one of these will replenish health and BD-1’s stim packs, used to recover health during battle, but will also cause all enemies to respawn. It’s a balancing act to elect not to recover health and restock BD-1 after clearing out a room and meditating to save, knowing the price to be paid is a full enemy reset.

This is tough but fair melee action adventure game. Cal has limited ranged abilities, while several enemies have powerful ones that that need to be countered or avoided. The young Padawan dies a lot in his quest to become a Jedi Knight, but I never encountered the same sense of unfair frustration I have in Souls games. After learning how a scenario unfolds or a boss’ patterns, I always saw immediate improvement in my tactics and abilities, which motivated me to retry and continue, rather than hurl my controller at the screen in pure rage. 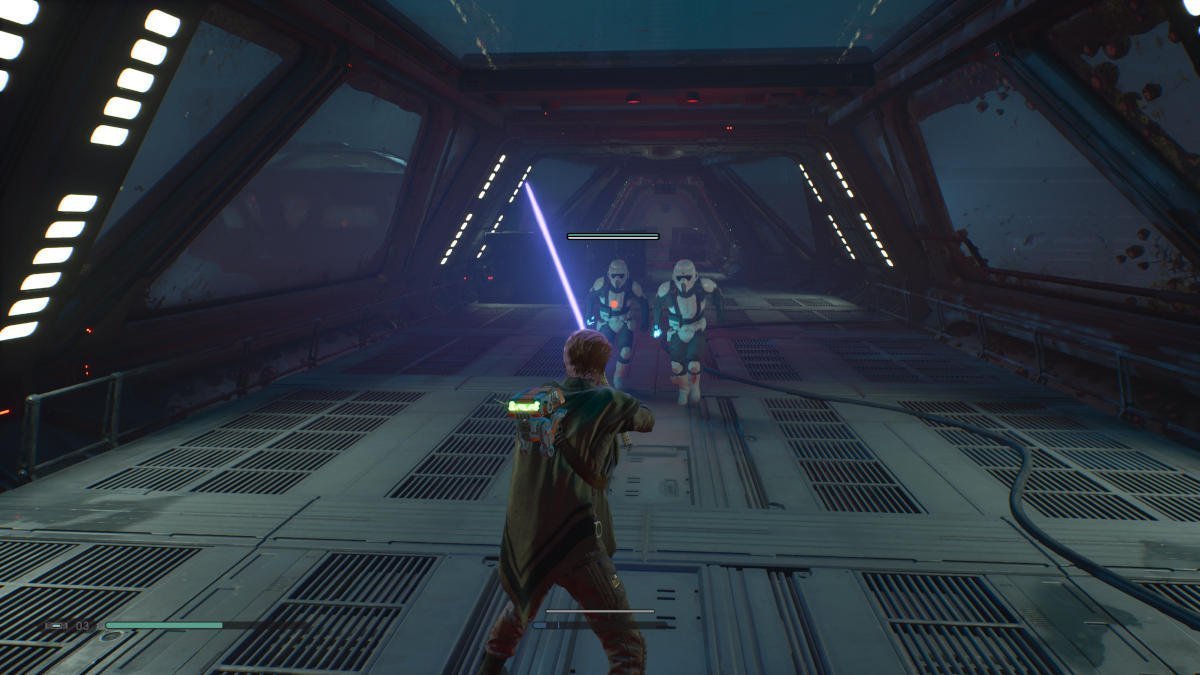 Knowing when to parry, block or evade — and then when to attack with the lightsaber or use a Force ability — is key to success; a good offence starts with defence, and trying to move through a battle too quickly will lead to Cal’s demise. It’s a case of learning each enemy type’s attack patterns and knowing how to counter them; but this becomes exponentially more difficult when facing multiple different enemies at once. This isn’t Assassin’s Creed, and they don’t wait their turn to attack.

The counter, as more enemies are thrown into the mix, is your own skills growing as a player, and Cal’s abilities becoming stronger as a Jedi. Facing the same enemies respawning time and time again can become a little tiresome, but there’s clear progress as you easily annihilate the same squad who gave you serious grief only a few hours earlier.

Whereas most Star Wars games struggle with the balance of challenge vs the overwhelming power of a Jedi vs an incompetent stormtrooper, Fallen Order recasts the Empire as a genuinely capable army. As you would expect, Cal easily dispatches of a couple of inaccurate stormtroopers, but the melee-based troops are considerably more difficult — this is a Jedi in training disconnected from his powers — and it’s the squads working together that makes them tough; so long as you master parry and evading, one of any enemy won’t pose too much of a threat, but four or five at once presents a serious dilemma. Think of combat like a puzzle, requiring you to figure out which enemy to eliminate first, which posses the most threat, and which can be dealt with later. 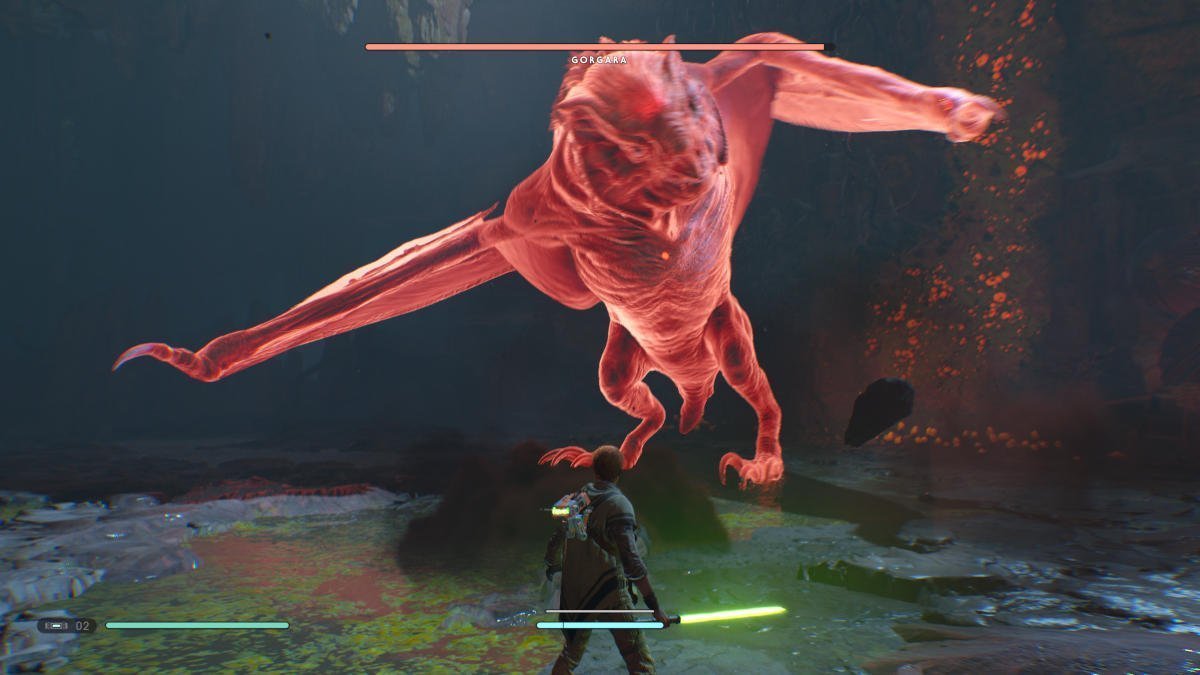 It’s the bosses and mini-bosses that ramp up the difficulty, and the only time I was really frustrated with combat, but that was fleeting as my skills rapidly improved upon learning their patterns. There are plenty of lightsaber battles with inquisitors, but also fights against strange creatures and giant monsters that fly in the face of tactics that work against human opponents — but those creatures can be sliced up, whereas human enemies take Disney’s approach to lightsaber damage (see: Fynn being sliced in the back); everyone remains intact because tis but a scratch.

For all that I like about the gameplay and the world, none of that is enough to make this feel like it fits within the Star Wars universe. It’s all brought together by the audio and an amazing score that makes this a complete Star Wars experience. It knows when to hit the right highs and lows with classic Star Wars tunes and new melodies that feel right at home, all of which bring the story and action to life.

The visual and performance aren’t held in such high esteem. It’s an okay looking game, the lightsaber lighting effects are fantastic, but some of the NPCs and environments are a little bland, and a lot of the faces don’t look right. Sometimes it also looks worse for wear due to slowdown and stuttering in heated battles, even playing on Xbox One X, which will hopefully be improved post-launch — but it always sounds spectacular. 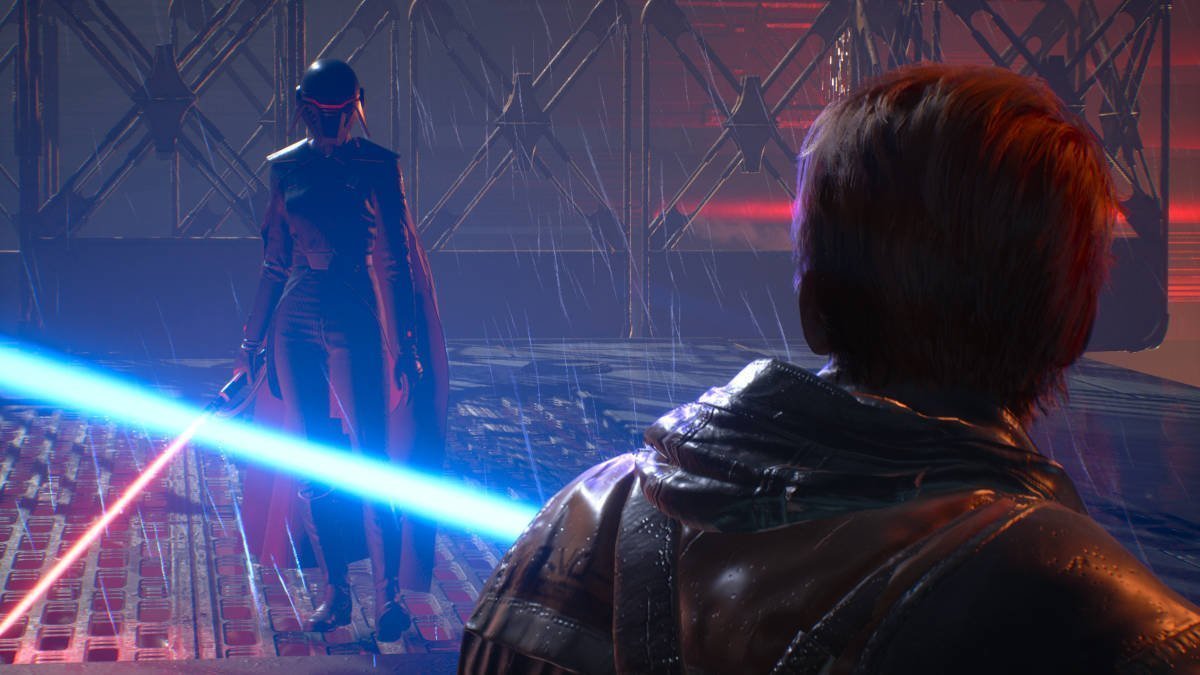 It’s the blend of all these elements that makes Star Wars Jedi Fallen Order the gripping single-player Star Wars game we have been waiting for all generation. Challenging combat is broken up by platforming and exploration, and it’s all held together by a narrative I genuinely cared about. On their own, none of these elements are going to win awards and are all done better elsewhere, but as a package they form something exciting — much like the Star Wars films.

Star Wars Jedi Fallen Order was reviewed using a promotional code on Xbox One X, as provided by the publisher. Click here to learn more about Stevivor’s scoring scale.