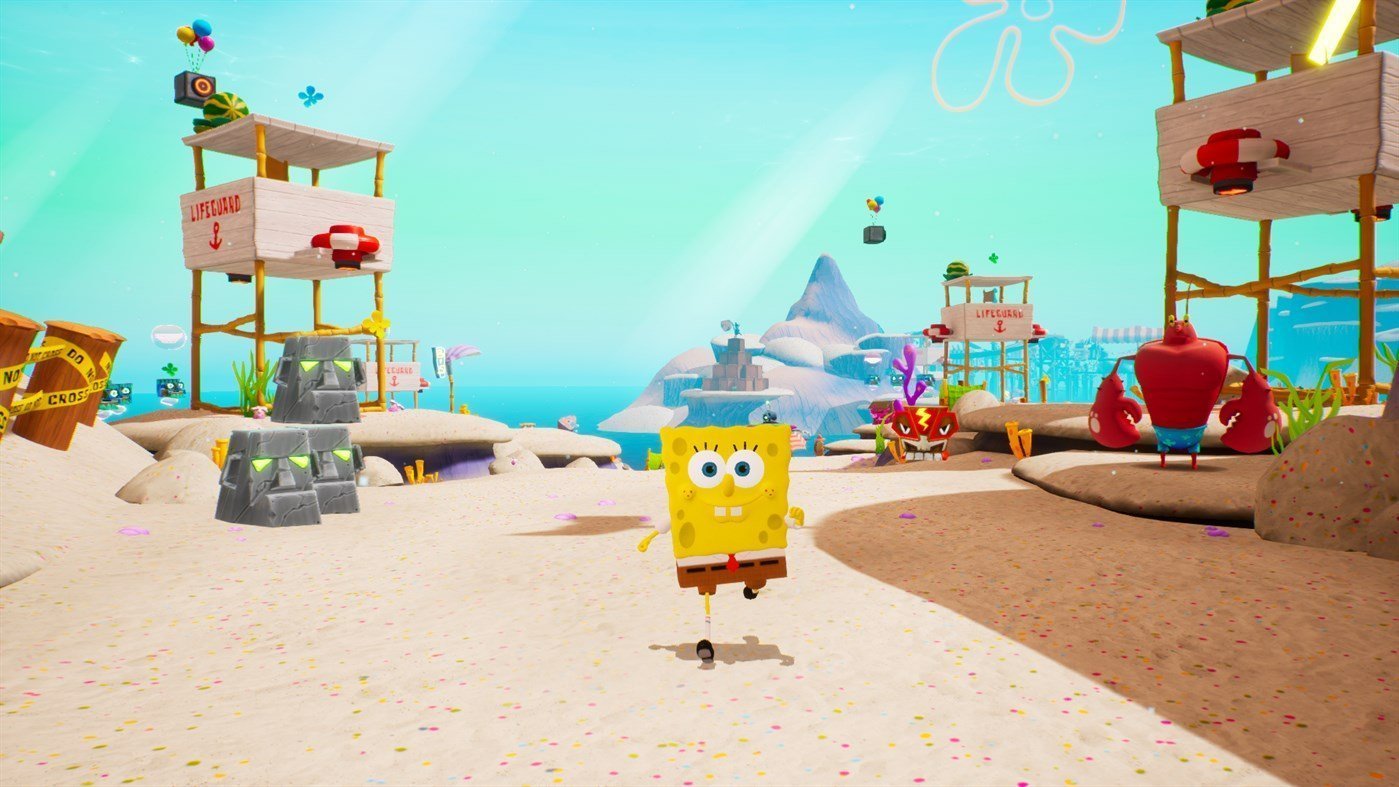 He lives in a pineapple under the sea...

SpongeBob SquarePants Battle for Bikini Bottom Rehydrated is available today, a remake of the 2003 Xbox and PS2 classic. I never played the original back in the day, deciding I was too old for the franchise at the time. After catching a couple episodes in self-isolation with my (admittedly younger) husband (and I point this out merely as a flex), I giggled enough to go back on that decision for 2020’s remake. I’m very glad I did.

Rehydrated is a modern revisit of a Banjo & Kazooie collectathon of yesteryear, with the titular SpongeBob joining forces with Patrick Sandy. Each character is his or her own unique set of moves, with Patrick key for picking up and throwing objects (including handy Freeze Fruits) and Sandy using a lasso jump and attack. SpongeBob himself has an upward thrust attack and can also turn into a ball to speed through levels. While our hero is always available as a playable character, bus stops placed inside levels will let him switch out with either Patrick or Sandy, depending on the level.

Set in Bikini Bottom (obviously), the player is tasked to defeat an army of rebellious robots set forth in the world by Plankton as part of a new scheme to steal the Krabby Patty secret formula. The magical MacGuffin that will save the world? None other than Golden Spatulas littered throughout the land. As SpongeBob sets off to collect the prizes, he’s also on the lookout for Shiny Objects, the game’s primary currency and one that can be exchanged for further Spatulas with Mr Krabs alongside and Patrick’s Lost Socks (which can also be traded for more Spatulas).

Each level in-game has a primary objective to accomplish, though there are many side-quests and opportunities to nab more Spatulas. Level design is quite ingenious, with a couple ways to reach certain goals, especially depending on the player character you choose to use. There are many opportunities to fast travel and explore, furthered by new powers unlocked as you progress, necessary to best locked sections all throughout the game. It’s the mix of straightforward objectives and exploration that keep things surprisingly fresh.

Level design is extremely vertical, and that’s accompanied by bungee sections which are even moreso, both visually pleasing and just downright enjoyable. Nothing’s overly difficult, though bosses can occasionally present a challenge. Simply put, Rehydrated‘s an adorable, relaxing jaunt in a month that’s in desperate need of some levity.

Everything feels extremely SpongeBob-like, from colourful, zany environments to character design and especially the game’s soundtrack (which you’ll have stuck inside your head for days after you play, though pleasantly so). As a result, those with ties to the television franchise will absolutely adore proceedings, while those who enjoy a old school collectathon will also feel right at home. This, coupled with a budget price of just $49.95 AUD, make it an easy sell… though let’s just ignore the $250 AUD Collector’s Edition.

In fact, the only real negative I can find for Rehydrated is in its multiplayer offering, a tacked on mode that feels soulless and unnecessary. A horde-style affair, players will mindlessly jump from one island to another, dispatching waves of robots. Combat’s the least appealing bit of single-player, so a whole multiplayer segment dedicated to it falls flat. Thankfully, the campaign will quickly wash the bad taste of MP out of your mouth.

SpongeBob SquarePants Battle for Bikini Bottom Rehydrated was reviewed using a promotional code on Xbox One X, as provided by the publisher. Click here to learn more about Stevivor’s scoring scale.