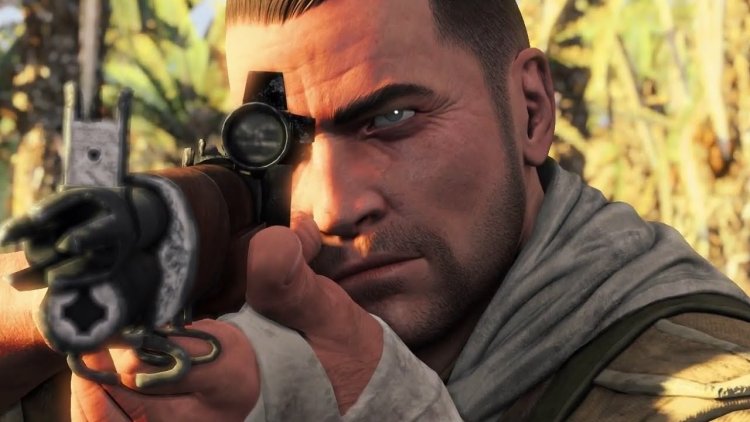 It’s not as pretty-looking, but it is a game with vast, open world environments and a series of mandatory and optional objectives that you are tasked to complete while working through the game’s campaign. All at one time.

Mission three almost looks exactly like Ground Zeroes; you’re in a military base, littered with scouting towers and search lights. Unlike Ground Zeroes, where you simply have to extract two people — or load another scenario entirely for anything else — Sniper Elite III has you destroying search lights, assassinating a high-profile contact, locating and extracting an informant and so much more.

If you’re unfamiliar with the series, it’s best known for its x-ray kill cam. Successful hits will trigger, Mortal Kombat-style, an internal view of your enemy as your bullet rips through it. Through the camera, you’ll watch as the bullet destroys organs -– including testicles, yuck -– or anything else in its way. It was a neat little trick at first, but got overly gratuitous very quickly. I turned it off by mission three as I was sick of the slow-mo, intestine-wrecking camera.

It’s not only about sniping; your character is a one-man tank, able to perform stealth kills with a knife, a silenced pistol and a variety of explosives. Armed with a sniper rifle, the dude can take out tanks with well-placed bullets in grills and the like. I’ve no idea if that type of damage is actually possible, but it was damn fun to carry out.

Playing as a cross between Snake and Spec Ops: The Line’s protagonist –- mainly because the latter’s protagonist and that of Sniper Elite III look exactly alike –- Rebellion has very much improved this game as compared to Sniper Elite V2. Linear paths are gone, and in their place are the aforementioned open world environments. The power of current-gen systems means that draw distances are amazing, and that’s pretty damn useful in a game where you’re tasked to pull headshots on enemy snipers 150 meters away.

Sadly, Rebellion didn’t improve on everything -– enemy AI is still pretty useless, even on harder difficulties. Worse yet, environments are very last-gen, and are littered with clipping problems when you’re interacting with it. I can’t even count the amount of times I went to pick up an enemy body only to magically teleport through a wall and into full view of those around me. Physics are a bit wonky as well; landing a successful hit on an enemy sometimes mean they’ll fly hundreds of meters straight up into the air.

Story wise, the game is a tad laughable. Playing this alongside Ubisoft’s Valiant Hearts: The Great War, I was amazed that Ubi’s game could actually make the war seem bleak and destructive while Sniper Elite III could not. The main character has a gravelly, ultra-hero voice that I assume was to make things seem real and gritty but instead had the game jumping the shark. Ultimately, Sniper Elite III wants to bro-fist you amidst explosions rather than be true-to-life.

The game features online play in the form of a co-operative campaign as well as multiplayer matches. I wasn’t able to find a match at all, even though the game’s been released to select regions, so don’t expect to thrive online. A challenge mode also places you against enemies, horde mode-style, but it wasn’t all that riveting.

In the end, the game’s not too bad, but nothing to write home about either. I played on normal difficulty and cleared out the game’s eight missions in about eight hours. Still, compared to Ground Zeroes, that’s almost an extra lifetime of play.

If you’re in to military stealth, Sniper Elite 3 is for you. Be mindful on Xbox One, however — the game comes with a whopping 16GB update right off the bat.

Update: The Switch version of the game plays largely like the original console release, though offers some motion controls that should be turned off. As with most re-releases on Switch, it’s definitely worth a look if you’re a fan of the genre/franchise and haven’t played before.

Sniper Elite 3 was reviewed using a promotional code on PS4 and Switch, as provided by the publisher and purchased by the reviewer. Click here to learn more about Stevivor’s scoring scale.