Superhot is taking bullet time to its logical conclusion: time only moves when you move. The game is one big close shave; bullets whiz by your head as you dodge gunfire and dance through enemies, cutting them down one by one. Like an old Rainbow Six game you assess the situation, make a plan and execute… at least until the next wave arrives behind you and it is time to improvise.

Don’t mistake Superhot for a shooter; this is a puzzle and strategy game that uses first-person shooting as its method of input. None of the standard shooter skills apply here. Anticipation is more important than aim — if you’ve ever enjoyed leading a rocket into a target you’ll find plenty of satisfaction here. The rest of the game is planning and using your limited set of tools to get out of sticky situations and turn the table on your enemies.

The concept is a great one, so perfect you wonder why this is the first time it has been extended to a full game. Born from the 7DFPS game jam, Superhot offers a “more than it seems” story mode and both endless and challenge modes that offer new twists on the story levels. If Superhot grabs a hold of you there is a bit of variety to keep you occupied, though better leaderboard integration would be a big boost to these extras. 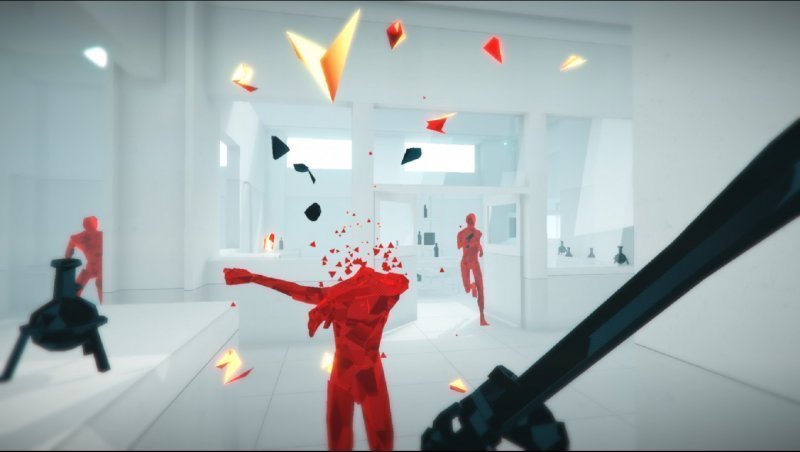 Said boost would be appreciated because Superhot is probably going to grab you. While its story mode will only keep you occupied for around four hours, its level variety and sheer challenge will keep you engrossed. The fast restart natures of Trials and Super Meat Boy are welcome here as some levels took me dozens of attempts. Both the perfect execution of a plan and successful improvisation to escape a tricky situation instil a sense of satisfaction that never gets old and the frustration factor is low.

Superhot knows how to make a magic moment. Ammunition doesn’t exist in this world, you need to source new weapons by vanquishing enemies or disarming them with a swift punch or by throwing your empty gun or a handy vase, spanner or pool ball at them. Shotgun blasts can take out up to three or four enemies with spread, the assault rifle shoots faster than a regular gun requiring less lead time and allowing you to spin 180 degrees between bullets of burst fire.

You can wring more time out of searching for secret terminals that offer a lot more insight into the mysterious storyline but I found that more tiresome than entertaining and went to YouTube for the exposition instead.

The base story of Superhot takes place within a fake operating system, where actually playing Superhot.exe is just one of your options. Fake chat logs and a variety of apps built within the limitation of this ASCII interface flesh out the world around the game, though little is answered about the mystery of Superhot until you go terminal hunting. The interaction of the main game and this OS is a highlight, Superhot Team do plenty with this faux fourth wall that had me smiling. 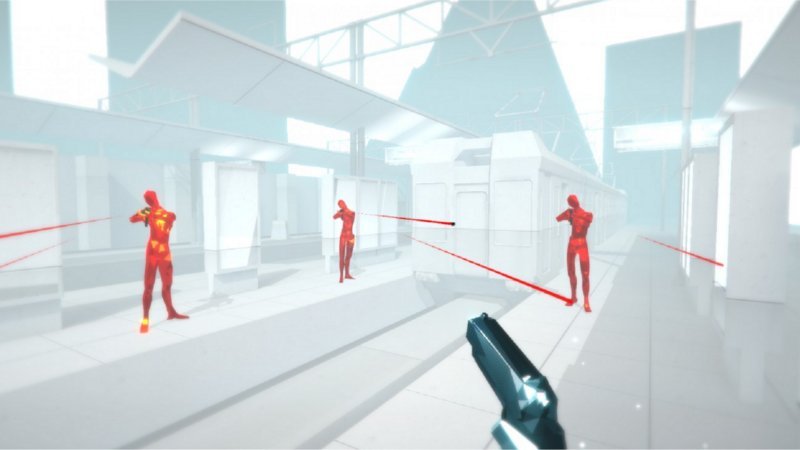 For how great the core mechanics of Superhot are, I wish there was more to it and much more of it. Only one new mechanic is introduced throughout the game, the ability to ‘possess’ an enemy to get out of tricky situations, and even that felt underutilised as few levels required its use for success. Superhot leaves plenty on the table, there is more these mechanics can do and for how great the game is it is a shame that it only scratches the surface of its ideas. Launching at $25 USD those who are more judicious with their gaming dollar will do well to carefully consider if endless and challenge modes with barebones leaderboard functions are worth the asking price.

Those that do splash out will get a fantastic, stylish game. Superhot oozes slick graphical touches, the bare colour pallette, the way levels tear apart upon failure, the phosphor glow of the ASCII interface and the way enemies shatter upon impact with swords and bullets. Sound design is minimal though the hypnotic chant of SUPER HOT at the end of every level will either charm or infuriate you and while leaderboards are lacking full replay support is included and can be uploaded from in game.

Superhot is a great game whose issues are only with how much you get. It is so good you want more and so engrossing you want to take part in score challenges and leaderboard chases. If being a great game is enough for you, jump on board, but for those who need to get plenty of bang for your buck Superhot might not be for you.

Superhot was reviewed using a promotional code on Windows PC, as provided by the publisher.