Before I played Skylanders SuperChargers I’d imagined it as a warped cross of Activision’s money-spinner and Mario Kart. That idea excited me so what was in my head was what I’d hoped for. With my hands on the finished product I still had so many questions, but now I’d have answers.

The way that you now drop a kart and one or two Skylanders figures on the portal was intriguing. SuperChargers seemed like platformer with customisable karts at the outset. How then would they incorporate the karts into the story?

In SuperChargers the nefarious Kaos has almost taken over the Skylands and is one step away from his log sought victory. Eon and the other Skylanders from previous games have been imprisoned and the portal masters (you, the player) have been cut off from their ability to use the portal. By using a rift engine — a device used by the ancients to open portals — the Skylanders are able to contact the portal master and bust out. The rift engines are also the power source for the title’s titular SuperChargers. 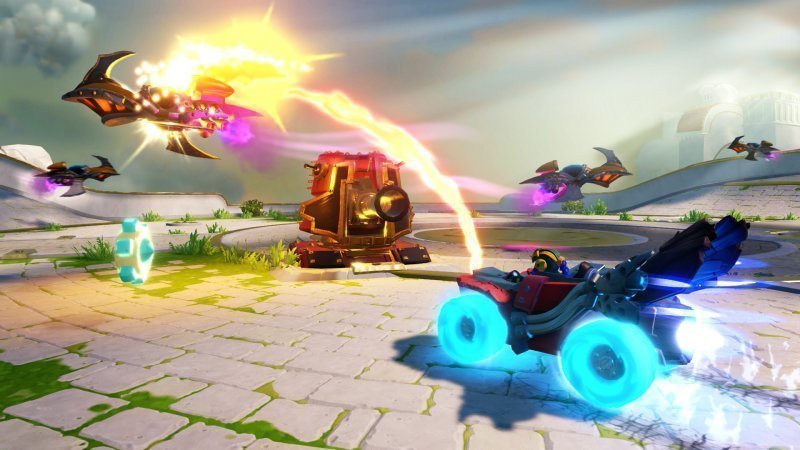 Playing single player is different to previous titles as you’re required to have both a Skylander SuperCharger and a vehicle on the portal at the same time. If you match the Skylander to their vehicle they both get SuperCharged, which grants a boost to their stats and a visual upgrade. However any Skylander can use any vehicle. This includes all older series Skylanders, Giants, Swap Force and Trap Team. Traps are also still usable but now only give you a skystone for the Skystone overcharge mini-game which is a slightly modified version of Skystones from Trap Team.

SuperChargers includes a kart racing mode which is unlockable by playing through the story. This mode is similar to Mario Kart and again allows any combination of Skylander and vehicle. Aside from racing there are also time attack and other racing modes alongside online multiplayer. I will admit when I noticed there was no couch co-op I was shattered. Playing multiplayer is as simple as adding another Skylander to the portal, but player two doesn’t get a vehicle, instead becoming the gunner. It’s easy to see why this restriction has been included as it would be a mess if both players went in opposite directions.

The vehicle sections of each level are split into on-rails race to the finish or an arena battle. The race sees you moving left to right, collecting coins and shooting enemies while the arena battles will have you wanting to tear your hair out due to the controls. In this mode pushing up on the stick moves the vehicle up on the screen and turns that direction no matter which way you were facing. If takes some getting used to. Each of these vehicular modes will make up about 20% of a level which leaves much of the original platforming mechanics intact.  Some of the other vehicles you can buy separately are submarines and planes with the subs adding an underwater mode which tasks you with avoiding edges and killing enemies. I didn’t have access to a plane to try, but they add a the same on-rails race as the kart; albeit in the sky. 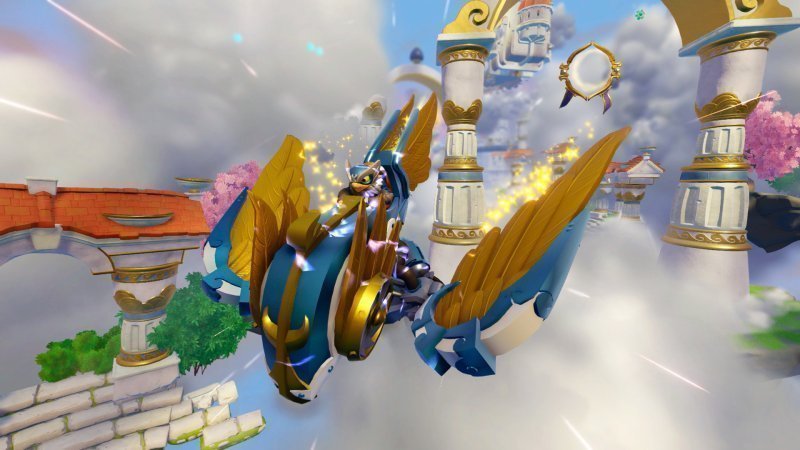 As usual you collect artefacts that will give you broad buffs by placing them in town and  an abundance of hats for your characters. In SuperChargers, instead of needing a certain of element Skylander to open gates you will need either a land, sea or air vehicle. Some portals can only be opened by the new SuperChargers and will unlock a 2D platformer. Hidden throughout the levels are customisable parts for your vehicles —  two affecting visuals and the third being a horn —  and just like Skylanders you can level them up by spending the new currency; Bit Gears.

Skylanders SuperChargers was reviewed using a retail code on Xbox One, as purchased by the reviewer.