Arkane Studios bucked the trend of sequels and bankable imitations to deliver something truly unique with Dishonored in 2012. The steampunk shooter gave as much scope to play as a ruthless killer as an opportunist wizard of the supernatural or a covert ninja disciplined to succeed without lethal force. It was a one-off masterpiece, since re-released on PS4 and Xbox One, never intended to spawn a continuing narrative. So of course, now it has.

Dishonored 2 grew legs during the DLC for its predecessor, as Arkane developed a map for a second instalment. Set 15 years later, narrative cohesion is achieved by beginning in Dunwall, but most of the action is set in the new costal landscape of Karnaca. For returning players, the late former Empress’ daughter, Emily Kaldwin, has come of age and ascended to the thrown, alongside her father (and bodyguard) Corvo Attano – and if you didn’t realise Emily was Corvo’s daughter, you’re not alone, so Dishonored 2 makes certain of their relationship.

Both Corvo and Emily are playable, and you’ll ultimately reach the endgame with either a low or high chaos rating, presenting motivation for at least two very different playthroughs. It’s a decision made almost as soon as you gain control, and the narrative prevents an opportunity to change your mind. My first run, obtaining a low chaos status with Emily, took eleven hours through to completion — but double that if obtaining all runes, bonecharms and paintings (collectibles) drives your inner-perfectionist. My second playthrough, high chaos with Corvo, slashed three hours off that time, with the benefit of experience. Emily’s skill set appears more conducive to stealth on paper, but I haven’t found that to be the reality on its own accord. It’s not so much who you choose, but how you choose to approach Dishonored 2. 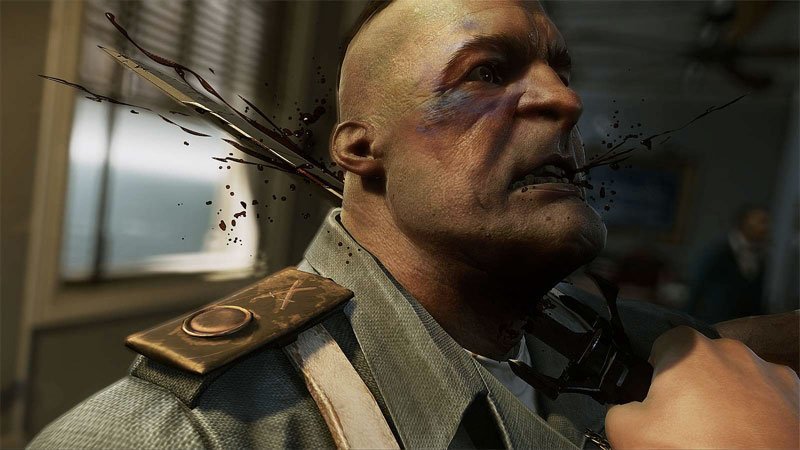 Once she’s been de-throwned, Emily is given a mask and imbedded with supernatural abilities similar to her father. Corvo can teleport short distances, assume the body of anything with a pulse, command an army of blood-thirsty rats, see through walls and bring time to a grinding halt to kill a man with his own bullet. Stealth is the key to success, but brutally slaying everyone in your path is an equally viable option. Emily’s powers are largely a twist on these, with the ability to instantly pull herself across short distances, sneak past as a shadow monster, link enemies together so one kill eliminates many, send enemies into a dream state and create a doppelgänger distraction.

After the first couple of hours, I was ready to write off the stealth approach I’d adored with Corvo in Dishonored 1 – and I actually think he’s a more viable stealth option, or at least better at escaping enemies. The first few missions quickly escalated into a bloodbath. Emily’s powers are limited and initially not as powerful as Corvo’s. However, once I expanded beyond trying to Far Reach everywhere between sneaking up on enemies, stealth became a much more fulfilling prospect.

It’s certainly much harder to complete Dishonored 2 without being seen. Enemies are purposely a little dull, as timing is key in both avoiding contact and competing in counter-attack heavy sword fights. They’re unbelievably alert to their surroundings, even on the medium difficulty, which does make a dedicated stealth run challenging. They’ll notice dead bodies well out of sight and hear things implausibly far away, but by the same token, they quickly lose interest once you’ve fled the scene. The cone of vision is based on direct line of sight, shadows only play a role at long distances, and enemies are quick to notice any hint of movement.

The biggest change is the reworked level format. Each mission is set within a distinctive themed mini-world. Dishonored 2 isn’t quite an open world game – expect long loading screens between each area – but each level is meticulously designed with ample routes and strategies for success. Furthermore, each of the missions (I’ve played so far) is not only set in a unique location, there’s a little quirk about each that makes it different to the last; be it the weather, a certain type of puzzle or strange enemies. 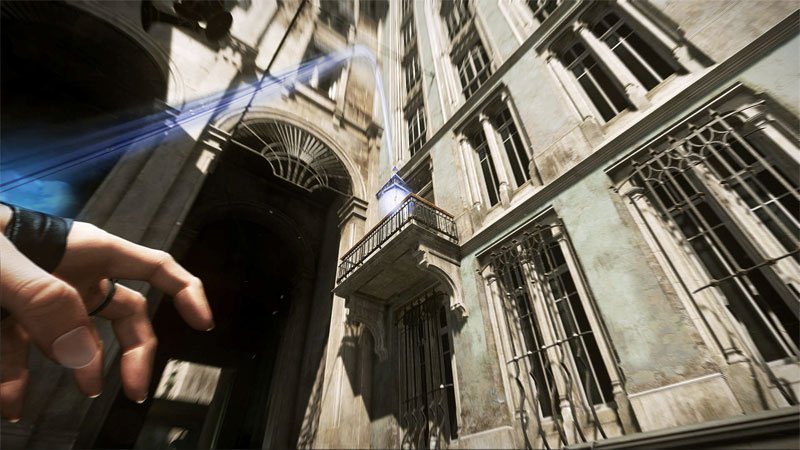 I said you could play through Dishonored 2 at least twice with vastly different results, but you could conceivably play these missions entirely differently five or six times. Tunnel vision often crept on the occasions I’ve been stuck, before I took a step back and realised there are far more options at hand than my brain initially could contemplate. Dishonored 2 allows you to play on your own terms, rather than insist you abide by its own. Almost everything I tried was possible in some sense. You can short-teleport to perilous ledges, and possess someone mid-jump just to break your fall. None of these tactics are necessary or even the best option, but they are possible. You’re not consigned to one set of right or wrong.

There are always multiple entry points to each location and a mix of lethal and more forgiving ways to eliminate the target. You can erase a man’s mind and keep him alive, or simply shoot him in the face. These options often depend on how you made your presence felt in the opening few minutes. Finding a means to eliminate the target without killing him or her requires finding clues and unlocking a non-lethal alternative. Patience is ultimately the most rewarding aspect of Dishonored 2 if you’re an aspiring silent assassin. I’m enthralled by the theory of stealthy gameplay, but alas failed to achieve silent perfection in a solitary mission. When I have the choice between stealth and brute force in a game, I’m always drawn to stealth. But inevitably it all goes horribly wrong, and everything unravels into a massacre, despite my noble intentions. Dishonored 2, like its predecessor, is the exemplification of such gameplay.

The quick save and load functionality is a stealthy player’s doctrine. Enemies are genuinely challenging, which makes constant reloading a must when trying to remain unseen. Standard gameplay tropes are overlooked, and take some serious getting used to. Guards wander off what appears to be a predetermined path, especially in search of a missing colleague; there are a lot of “huhs”, but they don’t shrug off absentees. This constant test is much appreciated, but its implementation generates some frustration. As I alluded early, enemy combat prowess is dimwitted, but they see things behind walls and hear things immediately, which shouldn’t be possible. This is all in an attempt to promote stealth whilst making it a genuine challenge; but as a result, you’ll never fully accept the rules of the Dishonored universe, because they aren’t quite consistent enough. 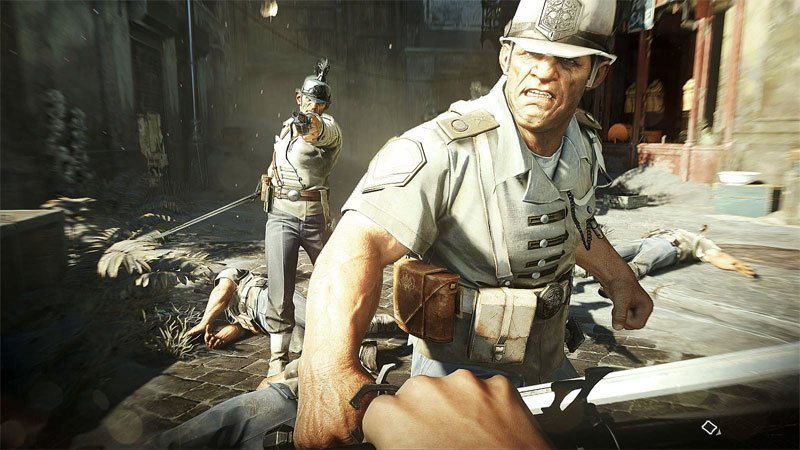 Despite this, the campaign actually becomes easier as you progress, by virtue of unlocking more abilities. The challenge remains imbedded in trying to obtain the low chaos rating. Carefree murderers can slash their way to success much faster, or use Far Reach / Blink to dash passed enemies entirely. Each of the nine mission environments remains unique, but enemies don’t scale up with you — depending on how many abilities you choose to unlock. That’s done by finding runes scattered throughout each location, exchanged for new and upgraded supernatural powers. Most are well off the beaten path, and some are quite tricky to actually locate, despite a waypoint.

Weapons can be upgraded with coins and blueprints found by scavenging throughout the intriguing world. Corvo or Emily’s handgun carries limited ammo and doesn’t conform to their stealthy origins, but is super effective in close combat. Their crossbow is more subtle and can provide a non-lethal option at range. These items, as well as magical abilities, are rotated through our assassin’s left hand, whilst his right is always clutching his trusty sword, which can be used to slit throats and deflect enemy blades.

In contrast to the disease-ridden Dunwall, Karnaca is bright and at times bustling, retaining the same simplistic art style used hand-in-hand with the 19th century setting. Murders are violent and gruesome, with disembowelled bodies half eaten by rats and spare limbs a common sight when taking a more forceful approach. The art style dictates a charming environment drowning in mystery and corruption. Running on a new engine, the lighting in particular is much better, but Dishonored 2 is still occasionally let down by some shoddy textures and rough edges. The steampunk design makes Dishonored 2 a very stylish game, but not a particularly good looking one.

There’s a massive technical elephant in the room that’s overshadowed what should have been a positive launch for Dishonored 2. This review, and the final score, is based on playing the Xbox One version. Stevivor’s Luke Lawrie has been playing on PC and advised me the Windows edition is practically unplayable, due to frame rate and mouse control issues. As such, while we recommend the console version, we don’t recommend playing the poor PC version at time of publishing — Bethesda has promised a patch to resolve these issues very soon, but it’s not yet been released.

Here I am, nearly the end of this review, and returning players are probably thinking this all sounds familiar: correct. Dishonored 2 doesn’t do much differently, but rather tweaks what came before it, while averting risk. Emily injects new abilities, alongside some different weapon upgrades. There are excellent new environments to go with a similar story that doesn’t really go anywhere; it’s almost a clone of Corvo’s original desire to clear his name of wrongdoings amidst a powerplay. It makes for a very good action-stealth adventure that genuinely encourages playing by your own rules. But whereas we praised Dishonored 1 for being one of the most unique triple-A games of last-generation, that inherently isn’t the case with its very good, but very safe, sequel.