From theme parks to suburban neighbourhoods, budding virtual architects of the last two decades have rarely had to deal with decisions heavier than where to place an ottoman or when to empty their bladder. Prison Architect removes the ladder from the building simulation pool, bringing with it moral quandaries like death row, solitary confinement and the displeasures of communal showering.

Prison Architect delivers a deep, gratifying prison building and management simulation. You have an intimidating number of rooms, items and structures at your disposal, allowing you to create prisons that range from minimum security facilities that more closely resemble a bed and breakfast than penitentiaries to brutal, hellacious fortresses designed to suck the life out of those poor souls imprisoned there.

The prisoners themselves are the stars, causing you trouble at every turn. Each has their own personality and tendencies; some are well behaved or easily pacified, others will make you wish you could send them to the electric chair instead of solitary confinement. They will smuggle weapons out of the kitchen, sneak phones from their loved ones at visitation, have drugs thrown over your fences and if things get bad enough, they will attack other prisoners and even your guards. They are as needy as a Sim and how well you balance these needs both individually and on a population level will determine if you spend your time building new facilities or putting out fires and quashing riots. All of the tools you need to do just that are available from the outset, there are a few features locked behind a basic research tree but generally you can start building your ideal prison from day one. 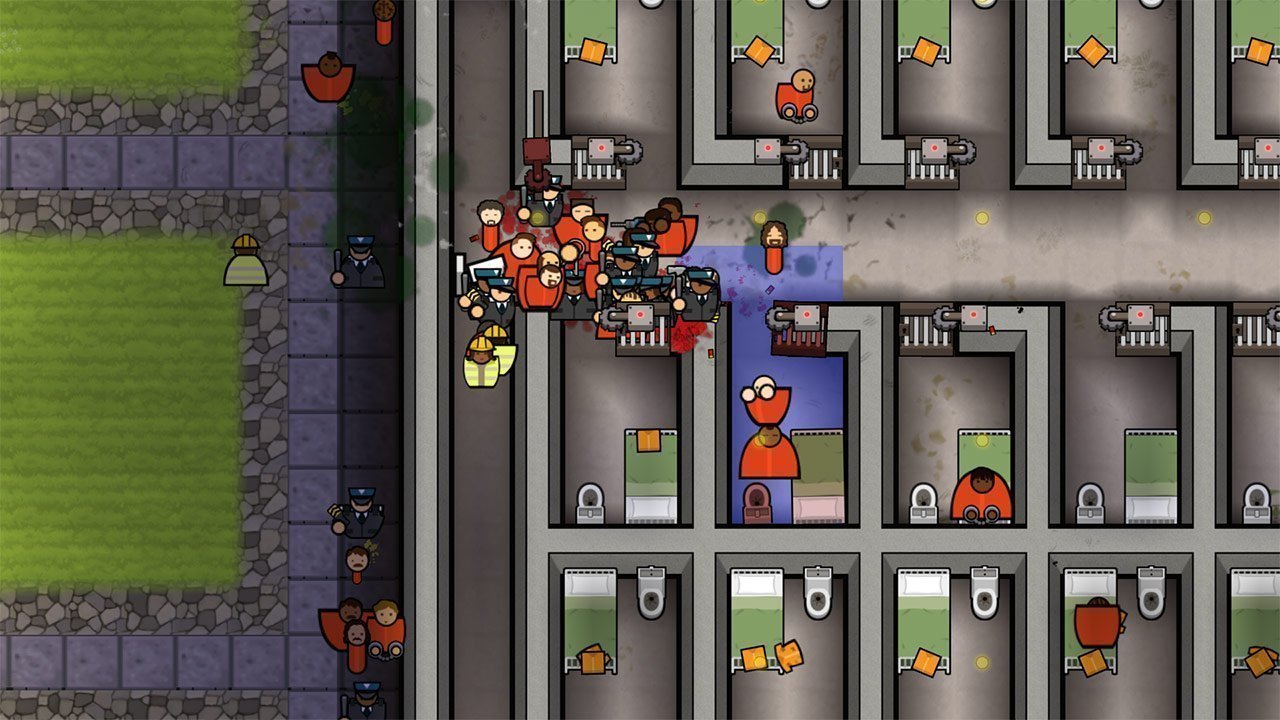 This provides an intimidating number of options but the only goal oriented mode of the game, titled “Prison Stories”, doubles as an extensive tutorial with some half-baked moralising thrown in among some basic narrative. Over these five episodes you are hand-held through the basics of the game, with limited tools and freedom available to you. It is a good way to ease you into an otherwise frightening simulation but too much time is spent waiting for prisoners to finish educational programs or for a fully functioning prison to earn enough money to meet an objective and move on. Prison Stories dragged on, with the limited narrative doing little to drive the action.

Prison Stories introduces the primary conflict of Prison Architect: rehabilitation versus deterrence. The stories don’t flesh out that battle in any meaningful way, nor does Prison Architect make any stirring political commentary, but if you want to run a successful prison you will have to choose one approach or the other. Prison Stories briefly gets critical of profiteering from the penal system, a criticism that rings hollow when in-game success is itself measured by profitability and reform rates. Prison Architect is never “won”; improving profits and reform by educating and humanising your prisoners over treating them so poorly they are scared to be sent back is purely a personal choice, one that will inform your design decisions to the core.

Prison Architect would benefit from more structured goals. Prison Stories can be finished in a night and beyond that you are thrown into the world to make your own fun. After I built a couple of very similar looking prisons I ran out of reasons to come back. A campaign structure could easily be applied here, simple goals such as “make a lot of money”, “reform through education”, “hold a huge number of prisoners” or “create an inescapable pit of torment” would focus your energy on a particular style of play and show off the full breadth of Prison Architect’s systems. It would also make more use of the various “warden” characters you can choose that unlock some basic perks for your prison. That isn’t to say the systems of Prison Architect need help to throw challenges your way; riots, fires, contraband and drugs will all test your prison managing mettle, but you have to dig those holes for yourself before you can dig your way out.

There is a collection of pre-built prisons available to take management of, each with their own potential challenges, but getting thrown into the deep end and fixing a prison I did not find nearly as satisfying as unjumbling the mess of my own creations when things went badly. The game doesn’t deal with changing existing structures in a way that encourages this, trying to fix a prison suffering from power shortages literally gave me a headache as I micromanaged the rerouting of power lines and automatic doors that, without power, needed to be manually opened for workers to get through. 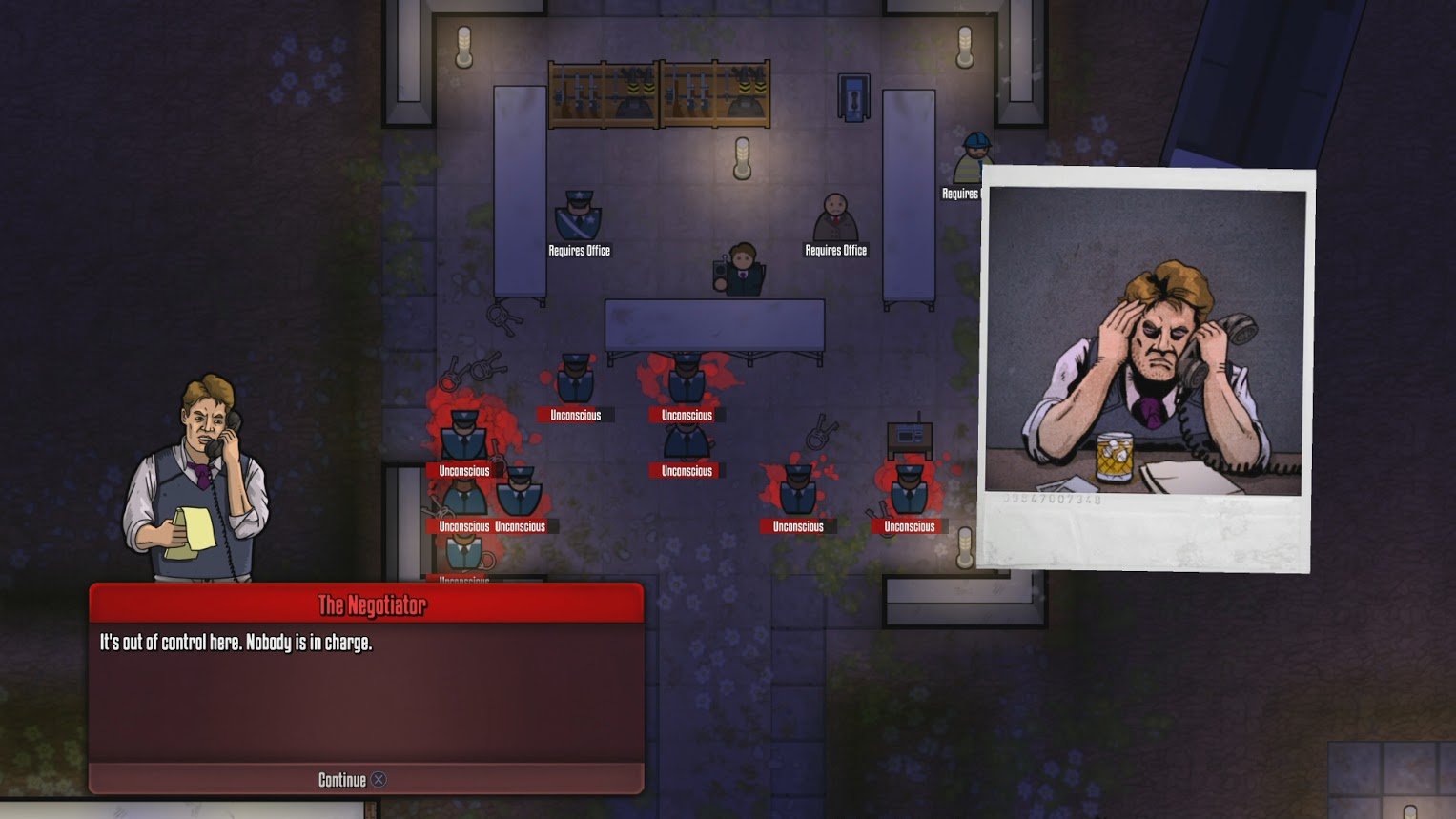 As PS4 Edition awkwardly tacked onto the version we reviewed may indicate, Prison Architect began life as a PC game. While the UI improvements Double 11 has made are welcome and the adaptation of controls to the DualShock are well done, mouse and keyboard will always be the best way to play a game like this. The UI is good but hardly perfect, searching through the huge number of room and object options would be better done via a grid rather than scrolling a list, though filtering options slightly ease that pain. There is some clunk around selecting staff and moving them around but largely I found this an intuitive way to map a complicated set of controls and menus. More troublesome to me was the small text, this is a game meant to be played inches from the screen rather than feet.

There isn’t much to Prison Architect presentation wise — the graphics are deliberately abstract which serves to dehumanise your prisoners and staff but also keeps the interface clean. There is a limited soundtrack and serviceable effects, while some prisoners are fleshed out with flavour text biographies that must have been crowd sourced for how poorly some match the theme. Having an “independent game developer gone rogue” shanking guards would be disturbing if it wasn’t so ridiculous.

Prison Architect is an excellent sandbox, a throwback to the days of Bullfrog’s Theme series that forces you to balance an eye for aesthetics with pure functionality. Those who don’t need to be led by the hand to explore the deep systems at play will find an excellent simulation to lose themselves in, with online sharing options providing a huge selection of prisons to explore, tear down and rebuild. If you can stomach the morality of prisons for profit you will enjoy Prison Architect.

Prison Architect was reviewed using a promotional code on PS4, as provided by the publisher.