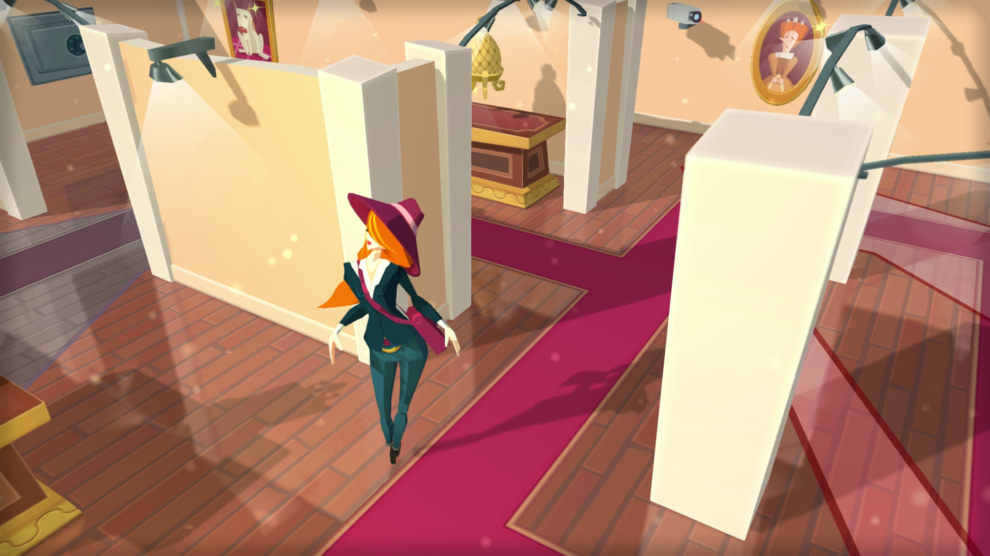 For many games stealth is merely a prelude to murder, if not an outlet for it. Silently choking guards, hiding bodies in dark corners and sneaking over rooftops is what stealth means to most games, and the consequences of discovery are usually having to fight both a below average combat engine and heavily armed guards before angrily hammering restart and cursing whoever thought it was a good idea to put a stealth sequence in their corridor shooter.

Wonderstruck Games’ The Marvellous Miss Take is bringing dignity back to the stealth genre. This is about breaking in, taking what you want and leaving without a trace of evidence to suggest you were ever there. You have no ability to harm or be harmed, if caught in the act the sassy main character Sophia will raise her hands in the air in a half surrender, half “what did I do?” shrug. What you do have is brains, distractions and gadgets wrapped in an amusing story with charming characters and a fantastic sense of style.

The key to The Marvellous Miss Take is that the guard behaviour is not pre-programmed; every movement they make is random. You aren’t meant watch and wait for an opening or learn patterns, you need to take matters into your own hands and manipulate the guards, creating free passage to the artwork and sculptures designated as ‘to steal’. Much like an isometric Mark of the Ninja, each guard and camera has a vision cone and every noise you make is represented visually to indicate who can and cannot hear you. Later in the game dogs are introduced with smell cones as well as vision, they are relentless in hunting you down if they catch a whiff. Guards have various states of alert and this can be used against them, dash quickly past a doorway and you will capture their attention, by the time they wander over to where you were you can sneak around behind them. Guards will always investigate what they see or hear, and the core of Miss Take is using this to your advantage.

Most of the time you will have a gadget to assist you, from basic noisemakers and smoke bombs to a personal teleporter, with levels tailored to these gadgets’ strengths. The random nature of the guard movement occasionally hinders The Marvellous Miss Take in offering balanced challenges; sometimes you will find guards clustered in the one room or placed as such to detect you the instant you step forward. In particularly frustrating cases, they can decide to walk circles inside the end of level elevator. I found at times despite the games urging to take matters into my own hands I was still at the mercy of the random movements, waiting for guards to leave a room, turn around or move away from each other. Even though levels are relatively short my patience was tested on particularly difficult challenges, there is a lot of precision to replicate and little margin for error in later stages or with the alternate characters.

These alternate characters offer their own spin on the stealth formula. Harry cannot run but has a ball he can throw at walls to create distractions and only needs to nab three paintings per level. Daisy is quick and quiet but needs to steal keys from guards then unlock safes, setting off alarms that draw unwanted attention. Both offer less variety than Sophia’s levels but those who are drawn in by the mechanics of the game will enjoy the extra challenges.

Speaking of challenge, The Marvellous Miss Take can be brutally difficult. I’m not well versed in stealth and struggled mightily with some levels, eventually my patience would wear thin and I would make even more mistakes, usually a good indicator to put the game down for the night. Those more talented at stealth than I can find that level of frustration in the optional challenges for each level, usually a par time plus achieving certain goals or getting through a level without being seen by a guard at all, a feat that is particularly maddening to attempt.

The depth of content here is impressive, Harry and Daisy offer a different enough experience they are more than just a diversion, while lacking the depth of the Sophia levels they make up for it in challenge and unique uses of the mechanics. The base game is unforgiving but rewarding and the persistent will get a lot out of the optional challenges. Even with my own frustrations I think The Marvellous Miss Take is worth that persistence, it has charm, has rock solid mechanics and most importantly is very consistent in its enforcement of those mechanics and rules. The way gadgets, new challenges and obstacles are layered over the base game is excellent, even if lasers and dogs will have you cursing the game. If you enjoy stealth then you should play The Marvellous Miss Take, it is a fine example of the form.

The Marvellous Miss Take was reviewed using a promotional copy of the game on PC, as provided by the publisher.