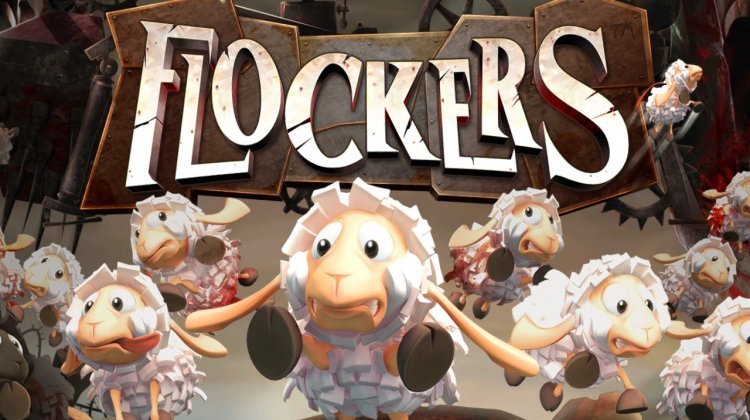 It’s cold and dark in this box. Fortunately Terence the sheep doesn’t stay inside long and is promptly whisked away, destined for greener pastures. The down side? The promised land is located past a plethora of traps, spikes, death, buzz saws, death… and death. Being the quick thinker that he is, Terence promptly herds his 49 friends onto a small platform safely out of harm’s way. Donning his woolly hat and cape he embarks on a journey; skilfully jumping gaps, scaling walls, dodging traps and manipulating the fundamental laws of physics.

But Terence is about to learn that, with great power comes great responsibility. With his friends a mere button press away from safety Terence is confronted by an immovable obstacle. Oh no! How will he get past? Can we help? We certainly can! A small, well timed explosion should remove the blockage allowing all to escape. Huzzah! Elation is short lived however as we quickly come to the realisation that the only combustible item present… is Terence! And so, dear reader, it is with a heavy heart write to inform you of the passing of Terence. Whilst his tenure was brief his sacrifice will be remembered and his loss mourned… until the next level when we must kill again in order to proceed.

Welcome to Flockers. A game that’s so Lemmings you’d be forgiven for thinking it came from the same developer. Team 17 did do a few Lemmings ports a while back however this is their first attempt at creating a full title. A task at which they have excelled. 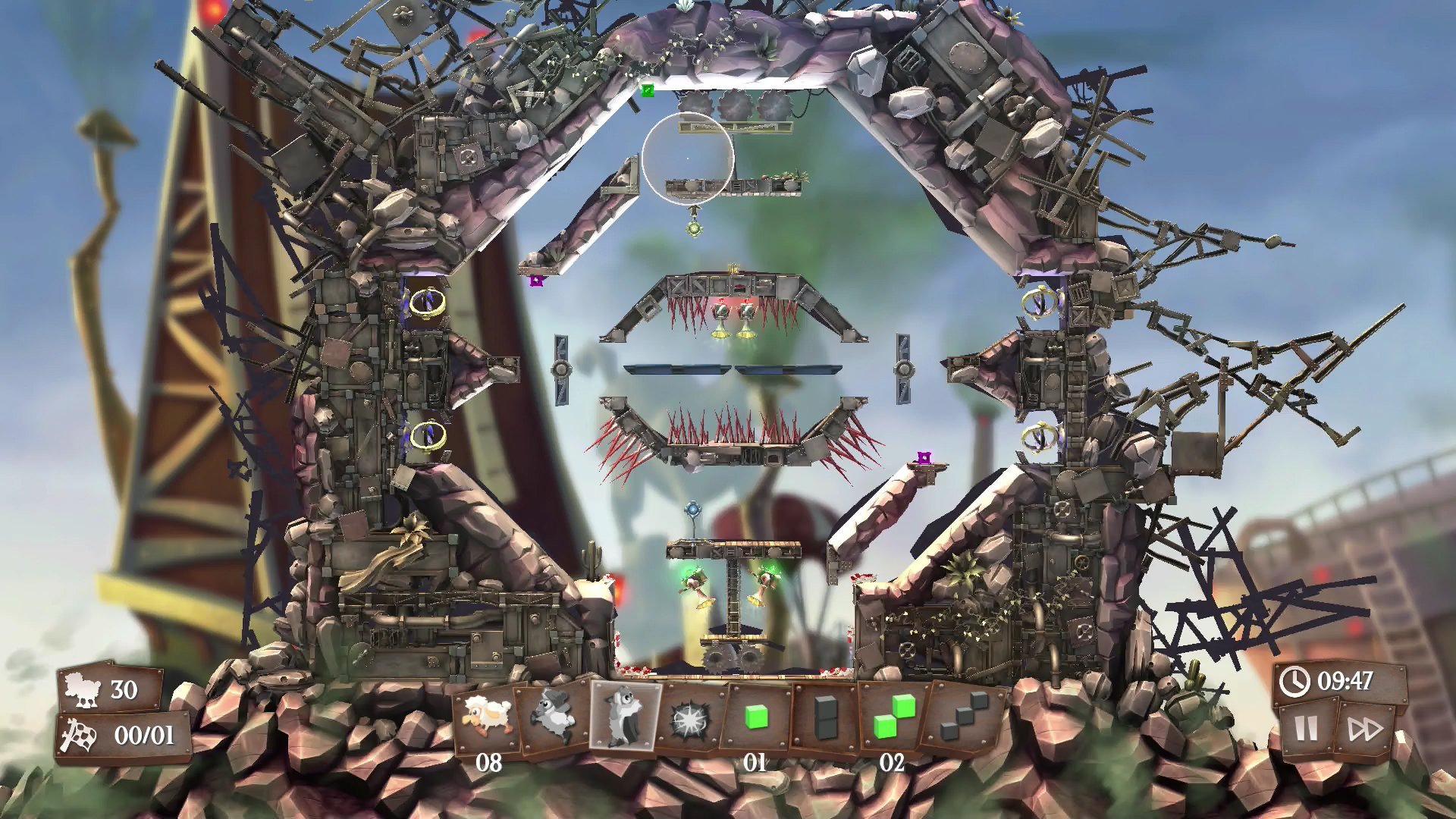 Flockers is a strategic puzzle game simple in nature but deviously clever in design. Your goal is simply to guide a line of sheep from an entry point to the exit. The path is never straightforward however and you must use a series of skills to find the right path whilst avoiding fatal traps and hazards. This is made more difficult by the incredible stupidity of your sheep who just walk in a straight line until they either bump into a wall or something dangerous.

This is where the strategic puzzle element comes into play. You can modify the way sheep behave by assigning them a role. Give a sheep a cape and it can climb walls and fall great distances. Try a woolly hat and, for some reason, it’s is now able to jump small gaps. Alternatively you could stack sheep into a vertical or “stairway” shape to either block a path or gain access to a new area. Every role has a unique and specific purpose however they are limited so your placement and timing are key. It’s a great concept but one that’s let down by a limited range of roles unfortunately. The levels are cleverly designed but the range of tools at your disposal makes them feel like you’re just figuring out the correct solution rather than creatively making your own. Fans of Lemmings will find this especially noticeable and I was surprised they didn’t include more… not even the super exploding sheep from the Worms games! 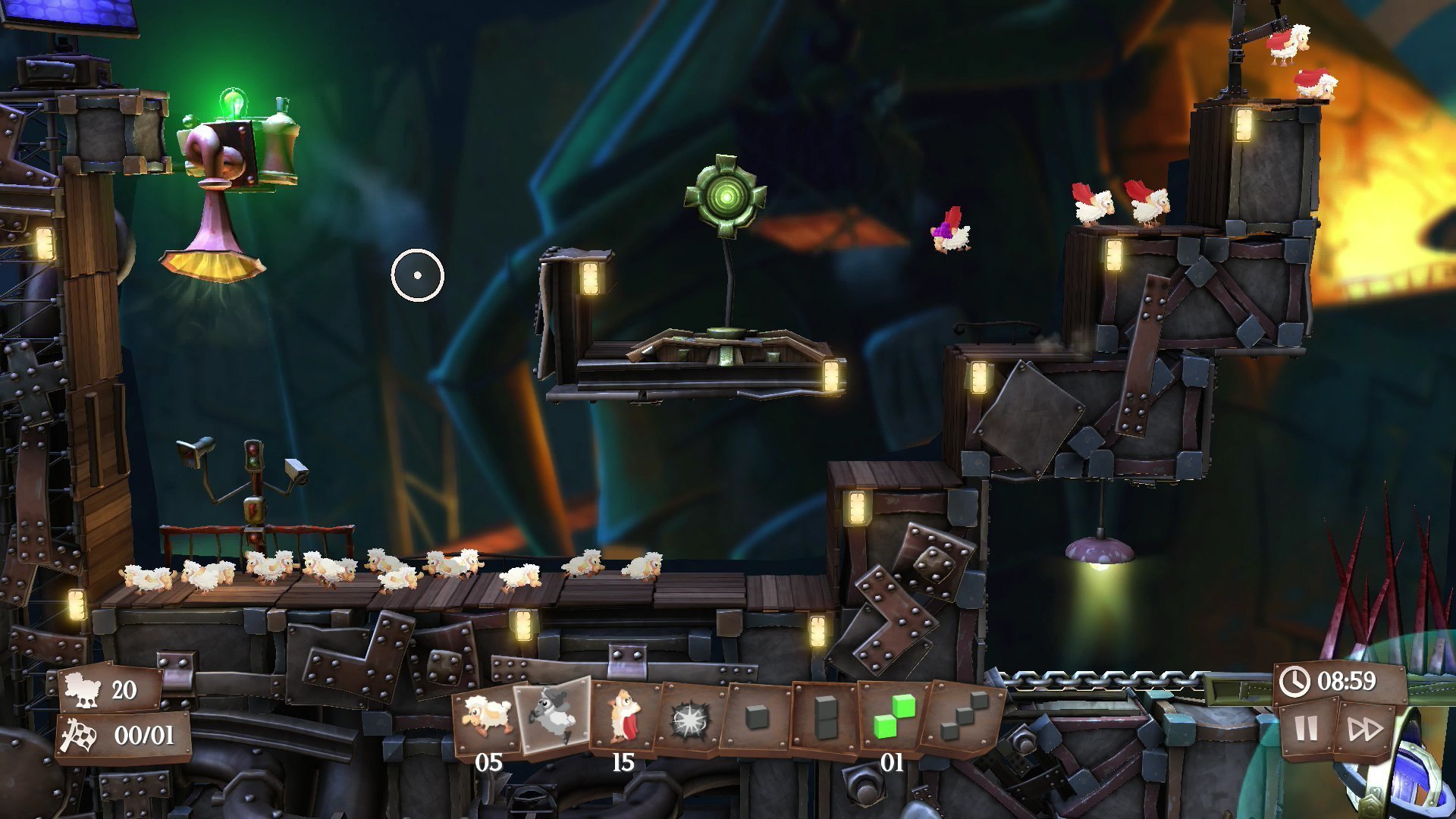 Assigning a role is as simple as selecting it, moving a reticule over the target sheep and pressing a button. The game feels like it was designed with mouse controls in mind however I used an Xbox One controller and found it both easy and natural. You can toggle the target reticule between a single sheep or wide brush allowing you to assign roles to numerous sheep at once. Add to this the ability to pause or speed up the flow of time and the daunting prospect of continually moving sheep in a dangerous environment is somewhat negated.

The game consists of 60 levels containing normal levels, bonus levels and boss levels. There’s little difference in strategy between boss and regular levels but the bonus levels are unique and fun. In those you have a short time limit during which you must awaken (then keep alive) as many sheep as possible. Outside the core experience there’s not a lot to give the game added longevity. Once you know the solutions to the levels there are only the usual temptations for fans seeking 100% achievements, leader boards, collectibles, star ratings, etc.). I don’t view this as an overly large detriment however as this tends to be the nature of puzzle games. There’s certainly enough content to keep you occupied and the added challenges often require different strategies to achieve.

I was a little disappointed to note that there wasn’t a great deal of difference in landscapes. At the time of this review I’d only made it as far as level 39 and the levels, whilst creatively designed, lacked the color and variance I’ve come to expect from Team 17. At least the bonus levels took us out of the factory setting and gave us some grass and sunshine.

Whilst the artistic design may have strayed from my expectations the Team 17 sound effects and humor most certainly did not. Here it felt just like they’d taken the stylings of Worms and added sheep. This was beautifully complimented by a catchy score that, even now, is bouncing around inside my head.

Flockers will be coming out on the 19th of September on PC, PlayStation 4 and Xbox One. It’s not overly long but is priced accordingly at half a normal title. If you’re a fan of strategic puzzle games like Lemmings or Krusty’s Super Fun House then purchase is a must! It’s ridiculously fun, cute to boot and a decent challenge.