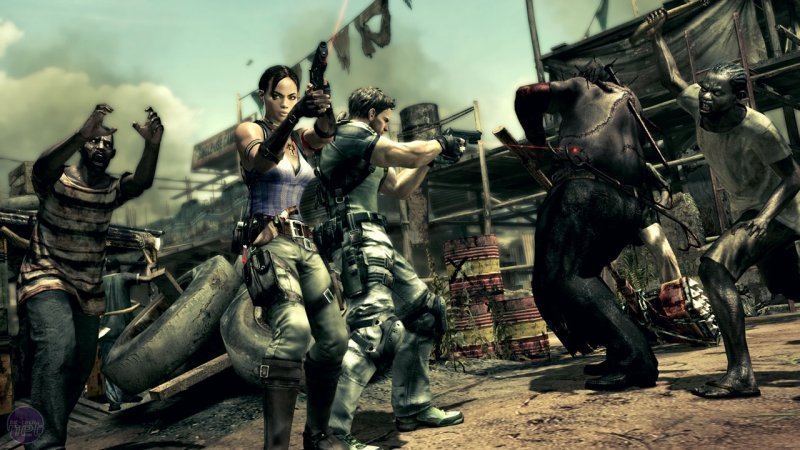 I am an Xbox 360 achievement whore.

There’s no denying it; I literally spent my hard-earned cash on Avatar: The Burning Earth because I read you could get the full 1000 gamerscore for the game in five minutes. It proved to be true and I’m embarrassed to admit it was the best $70 I’ve ever spent.

Returning readers will already know of my love for the Resident Evil series, and Resident Evil 5 itself. The fanboy in me, combined with the achievement whore, drove me to play through the title no less than five times to receive a perfect 50/50 achievement score and the 1000 gamerpoints associated with that success.

I’d love to say I downloaded the content because I’m in love with Resident Evil 5 and I was itching for the chance to play online with 13 year old boys who enjoy throwing slurs at one another almost as much as they enjoy cancelling out of games they’re losing. Alas, I really bought it because I was NEVER going to settle with having an incomplete achievement listing in one of my favourite games!

I regret my purchase.

For starters, the 400 Microsoft Point Xbox 360 purchase, or US$4.99 on the PS3, may seem reasonable, but not after you pony up your cash to discover the downloadable content weighs in at a whopping maximum of 1.8MB. Compare that to the latest DLC on Tomb Raider: Underworld or Fallout 3, both of which sit around the 300MB. Capcom’s denying it, but it’s hard to believe that you pay for anything but a key to unlock content that was already on the original game’s disc (that you’d already paid for).

I shrugged that lack-of-value off and loaded up the DLC, entitled Versus, to sit around for 10 minutes trying to find a hosted multiplayer game. Instead, I found a plethora of cancelled games, games with player limits already reached (so why still appear on a list of available games?), or games I simply couldn’t connect to for unknown “network reasons.” I double-checked my network connection with another online game and it worked fine. Still, I shrugged all of that off too.

When I finally connected to a game, I had a choice of two main game modes: Survivors, which pits you up against a maximum of 3 other human players as you run around in-game stages attempting to kill one another, or Slayers…which is basically the same. Except you’re supposed to leave other players be (a bit, at least) and focus on killing computer-controlled Majini enemies. I think.

I may have gotten the order of those games backwards. The thing is, it doesn’t matter: the two modes play the same. In Survivors, you get points for killing your human competitors and the Majini simply serve as cannon fodder for more equipment. In Slayers, you get points from both Majini and human competitors, but your points multiply with combo-kills (think Mercenaries mode on the main game disc). Logic dictates that Slayers would call for a different style of play; a player should, in theory, focus more on the computer-controlled characters to chain bonuses, get a higher score, and resort to target other players on an as-needed basis.

Nope. Xbox Live players run around in either mode, trying to get as close to one another as possible in order to let human-controlled brains fly with a shotgun. There’s no strategy involved in four-player games where you’ve never met your competitors before. Especially in a Team Survivors or Team Slayers game, where you’re teamed up 2-on-2. I manage to find a team-mate who’s happy running off on his or her own to get killed before any type of strategy is made, with headset on or not.

Heaven help you if you happen to stumble onto a game with a group of competitors who are friends with one another; they’ll group up and pick you off so frequently you’ll be tempted to take the route many players did when I actually was kicking their butt – turn off the power on the console so the game doesn’t get recorded and the victor gets no credit.

Long story short? I hate online multiplayer not just in Resident Evil 5 but in general. Achievements on Xbox Live or Trophies on the PS3 that revolve around online play are guaranteed to be the ones I’m missing out on. When they’re inserted in single-player games, or local play co-operative games, they suit me just fine; they serve as a testament to a player’s skills and capability and I’m personally quite proud that I was able to earn every single one possible in the retail version of Resident Evil 5. For the new DLC and the associated achievements, I’m forced to find four friends that bought the same content, that can play at the same time that I do, and then constantly play with them to work co-operatively (ie get them to let you kill them, help you get kill-combos, etc) to gain a set of achievements. Then repeat the process three more times for the co-workers so they have the same “success”.

Key word there? “Co-workers.” The downloadable content isn’t fun, it’s work. Even if you’re not playing for achievements or PS3 trophies, the hassle in finding games to join, then having to put up with the majority of immature online players is too much.

It pains me to say it, but the RE5 Versus DLC gets a Shite from this reviewer. Avoid at all costs, unless you’re a sad achievement whore like me and you simply must sell your soul to Capcom for the right to call yourself the ultimate Resident Evil fanboy.

(And if you do, let me know – maybe we can play online and boost one another…)