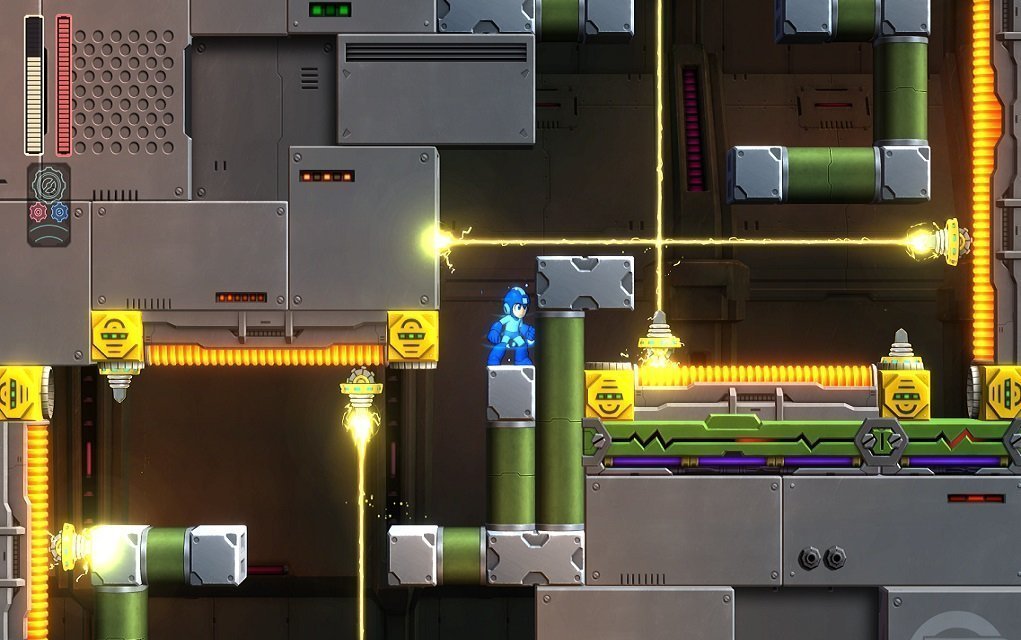 Return of the blue bomber.

With over fifty titles to his name across multiple narrative timelines and gracing almost every platform that’s been on the market since 1987, Mega Man is almost as much of a video game icon as Mario.

The last installment in franchise’s main series, Mega Man 10, was released on last gen consoles eight years ago and maintained the pixelated visuals, 16-bit sound and seriously challenging gameplay of the titles before it. Looking at screenshots of all the Mega Man games you’d be hard-pressed to tell the difference between those from the 80s and Mega Man 10. Mega Man 11 is the first in the series to have had a complete overhaul of its visuals and audio, finally bringing the series into the modern era. While potentially concerning to the devout retro gaming purists out there, rest assured the little blue robot you love is largely unchanged when it comes to gameplay.

If you’ve not played a Mega Man title before the concept is pretty simple. From the get go you’re given the choice of eight different levels to complete in any order, each with their own style, setting and end boss to defeat. Success grants you a new weapon, stolen from the boss, to use in subsequent levels as you see fit. That said, some bosses are particularly vulnerable to specific weapons so the order in which you play each of the eight stages can be very important.

Traditionally, Mega Man games have always been notoriously difficult and this iteration is no exception. On the normal difficulty both platforming and boss fights are really freaking hard. I’m talking crush your controller in your bare hands and pull all your hair out brutal. This is both the best and worst thing about Mega Man 11.

As you work your way through each level you’ll die over and over again either due to falling down the classic bottomless pit, landing on spikes — and both of which mean instant death — or at the hand of one of the many enemy robots that inhabit the levels as they chip away at your health bar. Enemies are almost all unique to their level and incredibly varied which keeps the run through of every level fresh. For example, one baddie is a syringe which shoots acid into pools of water eventually turning the pools themselves to acid… unless you can destroy them in time whilst also shooting their acid projectiles before they hit the water. Another is an owl that not only drops fireballs on you from above, but also illuminates the level so killing him makes traversing the level considerably more difficult.

You’ll scream, you’ll yell, you’ll clench your fists in pure red hot rage. But with each failure you’ll have only yourself to blame, and each time you’ll get just a little bit further and be motivated to keep trying, at least for a while. It was around the ninth hour of playtime that I started to get over the difficulty of MM11. It’s just so damn hard when played on the normal difficulty setting.

To make the game a little more palatable to players who are either less skilled or less patient (myself on both counts), Mega Man can visit a store between between levels in order to purchase upgrades and supplies. Upgrades offer helpful tweaks such as health boosts or the ability to have better grip on slippery surfaces (yes there’s a token ice level). These can be switched on and off at your leisure. Supplies are of limited use and consist of extra lives, energy refills and the like which are a necessity if you want to succeed. The best part about this is that all of these upgrades are completely optional so the die-hard Mega Man players can play the game in its purest form and be satisfied that they’re getting the originally intended, retro experience.

This however brings with it a number of issues. On the normal difficulty Mega Man 11 is so hard that players will likely need to buy the maximum number of lives and energy refills to have a snowballs hope in hell of beating each boss. Earning enough bolts to do so simply takes too long. While the trial and error nature of the levels will result in a steady collection of bolts, this alone will test your patience. The better alternative is to just repeat the first section of a particular stage over and over again where 100 bolts were easy to pick up.

Further to this, buying items in the store is a slow and arduous task as only one item can be bought at a time and a secondary confirmation asking, “are you sure you want to buy this?” is asked with every purchase. To make it even less fun, there’s an incredibly annoying line of dialogue that’s played over and over again with each transaction and confirmation. Hearing a character say “Ta-da!” 18 times in a row is more than enough to drive anyone a bit mad.

The only other gripe I have with Mega Man 11 could be said for all of its predecessors. Most of the fun comes after you’ve defeated a few bosses and are able to hot swap between their abilities. The addition of being able to switch on the fly with the left and right triggers is a welcome one and it injects a good degree of strategy when going up against certain enemies and bosses. In previous game swapping weapons required pausing of the game which broke things up a bit. But before you’ve managed to get past your first boss, and you’re stuck with just Mega Man’s abilities the game can feel very repetitive. It takes a lot of commitment to battle through which ever stage you pick first. But those that stick to it and defeat a few bosses will then be able to appreciate the pleasure of nailing a level without taking any (or much) damage.

Following the mess that was Mighty No. 9, I was admittedly concerned that Mega Man 11 wouldn’t do the series justice. So in the lead up to this review I spent a weekend playing all the old titles in the series (thanks Xbox Game Pass) to re-familiarise myself with Mega Man’s legacy. And through this process I can confirm that despite the obvious differences in visuals, Mega Man 11 is as challenging, fun and frustrating as every other game in the series in literally every single aspect.

Mega Man 11 certainly isn’t for everyone. It constantly teeters on the edge of being too hard to be fun which poses the risk of new players giving up on it too quickly. But it couldn’t be any more true to its roots and fans of the series will absolutely love it. With a few little additions to please your average run-of-the mill gamer it’s almost a perfect balance between being a tough as nails retro platformer and an accessible nostalgic hit for the seasoned gamer.

Mega Man 11 was reviewed using a promotional code on PS4, as provided by the publisher. Click here to learn more about Stevivor’s scoring scale.