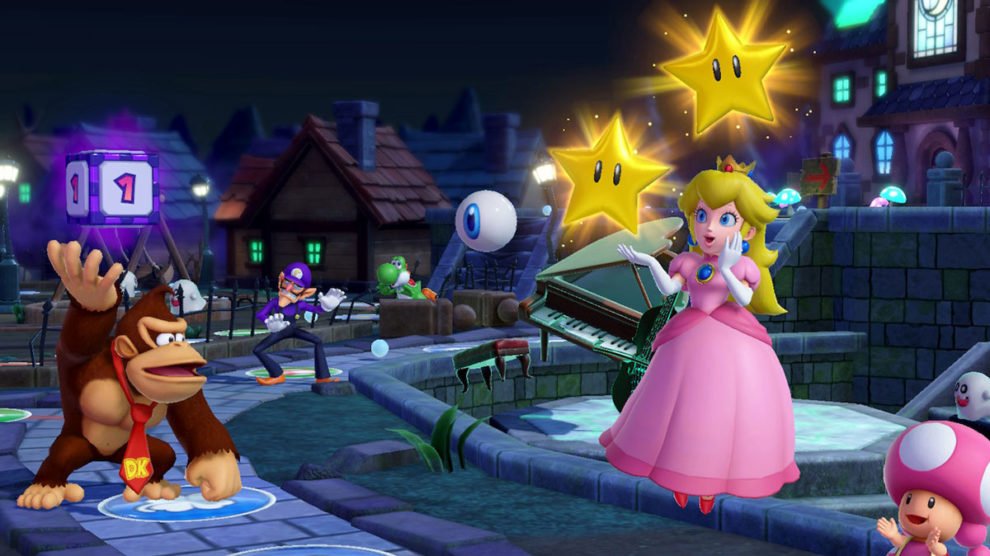 Mario goes back to basics to throw his best party in years.

Nintendo has looked backwards to go forwards with Mario Party Superstars, reviving five classic boards from the Nintendo 64 era and 100 mini-games from Mario’s parties #1 through #10.

Superstars cleans the slate of gimmicks, implemented to varying degrees of success to refresh the format, and returns to the straight four-player board game meets button-mashing minigame formula that proved so successful in the late-90s and early-2000s. The last few Mario Party games are like the latest iteration of Coke No Sugar. Perfectly fine, but change for the sake of change, when all you really want is Coke Zero to come back – and that is Mario Party Superstars, with the return of the original, and simply the best.

The Switch’s first soiree, Super Mario Party, set the wheels in motion by stopping them completely. It parked the car mechanic that shackled players together in Party 9 and 10 and returned to the traditional player-by-player turn-based format, last scene in 2007’s Mario Party 8. Following eight games in a decade, it was a formula desperate for a rest, but after an equally long layoff, it returned to rekindle the joy of Mario Party.

Super MP got the foundations right, but its selection of minigames were hit-and-miss, and far too reliant on motion controls years after waggle went out of fashion. It also made the bemusing error of halving the price of stars – Mario Party’s most valuable asset – to just 10 coins, which distorted the economy, and it still relied on some character specific novelties.

Mario Party Superstars has the luxury of correcting those missteps by stripping back the clutter and returning to the simplistic blueprint that worked so amazingly well generations ago. It relies on proven boards and mostly popular minigames, so while there are no real innovations here, it’s that safety and permission to reset that allows it to deliver the pure Mario Party we have been craving. 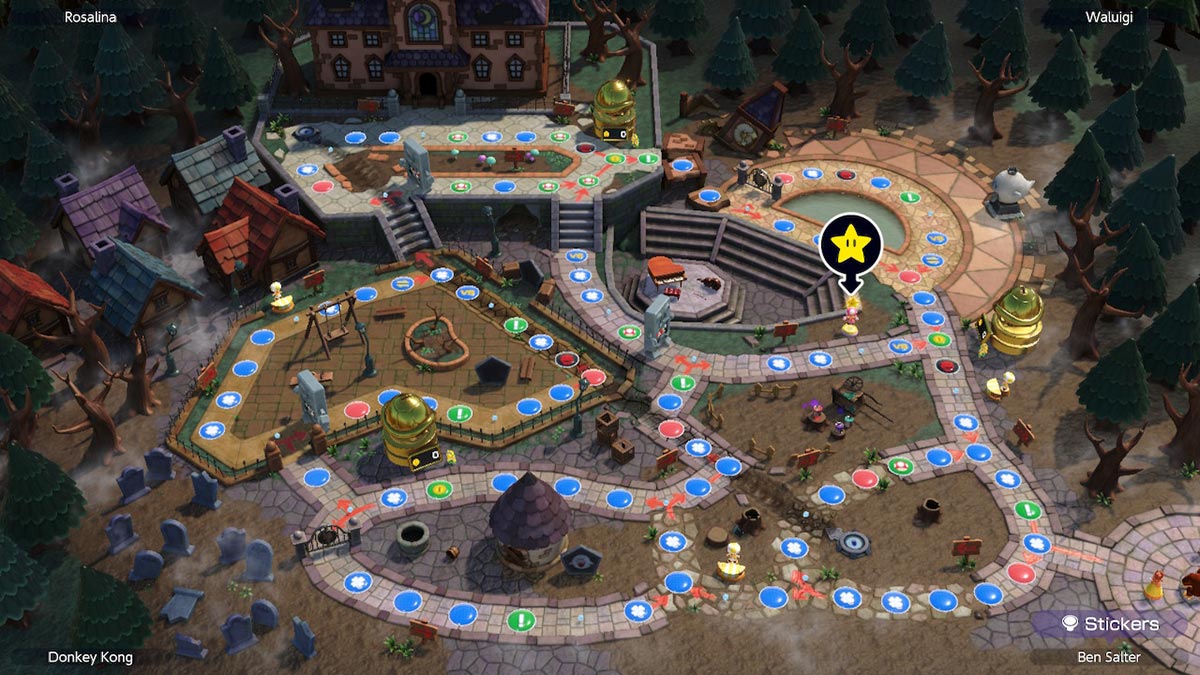 The five game boards – two each from Mario Party and its sequel and one from Mario Party 3 – are all refreshed but kept faithful to their original designs. I have always preferred the Nintendo 64 instalments; there’s something special and comforting about them that feels like well-crafted actual board games, with just the right amount of Nintendo flair.

The returning boards present a good mix, but also deliver the biggest disappointment, as five boards is less than any of the N64 games launched with two decades ago; frankly not enough for a remastered compilation. I expected close to double that, at least three from each of the N64 games, which I hope still comes to fruition through free updates. Nintendo has precedent correcting a lack of launch courses with free DLC added to Mario Golf Super Rush earlier this year.

The five boards available at launch are brilliantly designed in their simplicity – and at times, bastardry. By pricing stars at 20 coins again, during my play sessions, we had several players land on a star, only to fall agonisingly short on cash – often only a turn earlier when Bowser docked some cash or another player stole coins. It can be cruel, and that’s an important part of the Mario Party mix. 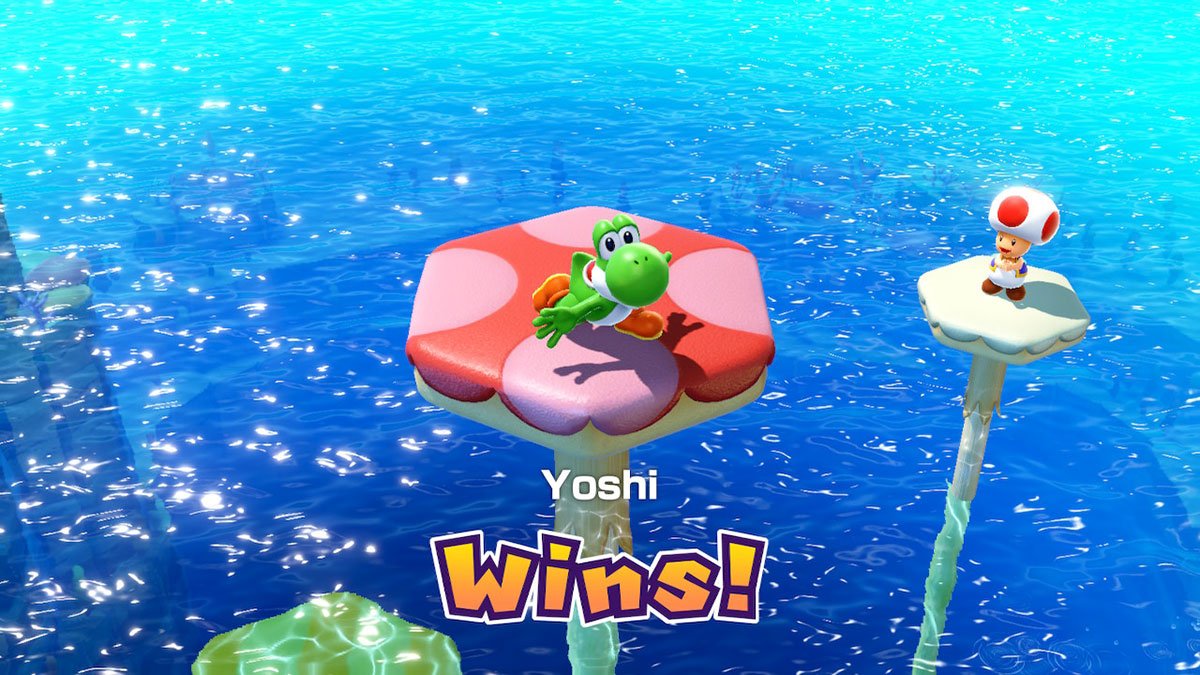 While it lacks content on the board front, Mario Party Superstars seriously delivers on minigames with a whopping 100, the most of any game in the series; although, that’s to be expected with a collection of reruns. No motion controls is a delight, as I’m in the old man category where my button-mashing is honed, and waggling around actually makes things harder, all the while putting my TV at significant risk. It was no guarantee either, as some games hark back to the Wii era, but the right call has been made to keep all 100 games as consistent as possible.

Internal developer NDcube has done a commendable job of retaining the essence of each game, keeping them as intended, while modernising them enough to feel as though they belong together in the same game. It features some absolute crackers of yesteryear, ranging from Mario Party’s Mushroom Mix-up all the way through to Skewer Scurry from Mario Party 10 on Wii U. Considering they all come from games spanning between 1999 and 2015, it’s a job well done. I’m not sure there are many other series that could seamlessly blend such a range of historical content as well as this.

The Party settings allow Mario and pals to enable the entire roster of minigames, only select the Nintendo 64 or GameCube line-ups, or choose based on genre. Along with other tweaks such as bonus stars versus classic rules, and even the option to listen to the remastered or N64 original soundtracks, there is a nice degree of variation to focus on your favourites. 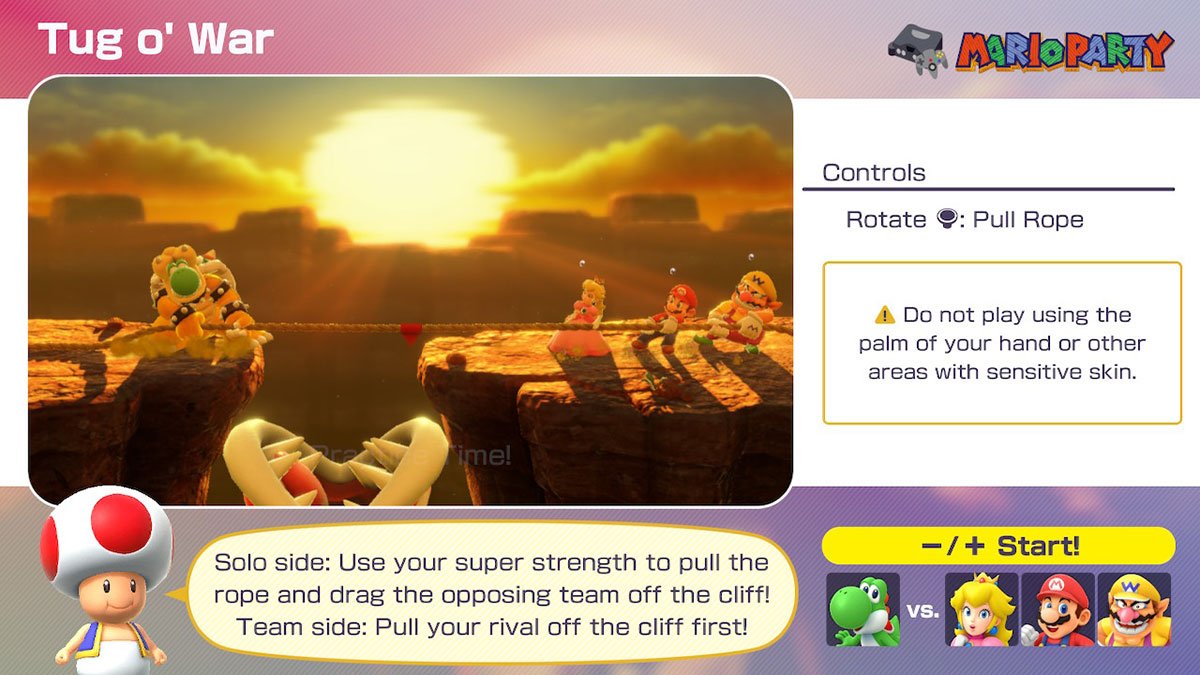 Having said that, to notch up the century, a handful of shockers have made the cut, along with the dumbfounding decision to include the notoriously destructive Tug o’ War without any changes to its controls. Nintendo infamously skipped the original Mario Party on the Virtual Console because this specific minigame ruined controllers and shredded palms. It remains one of the least touched games with an added warning not to use your palms to avoid injury or damaging your controller. That’s not good enough.

On the whole, older games have been tweaked a little to bring them into line, so there’s no reason it couldn’t have been changed to mashing A instead – or left out completely.

With so many games to choose from, the freeplay mode Mt Minigames is in its own right a fun night in. The interactive practice screens are as accessible as ever, with almost no wait times, and I’ve found myself more inclined to dabble in minigames alone than in previous games – perhaps because I’m more familiar with them. As well as general freeplay, there’s a mini-tournament of sorts tasking players to win games to earn the most coins, as well as opportunities to exclusively play team or 1v3 games. There are also daily challenges and online modes, but unfortunately we were unable to test these prior to launch. 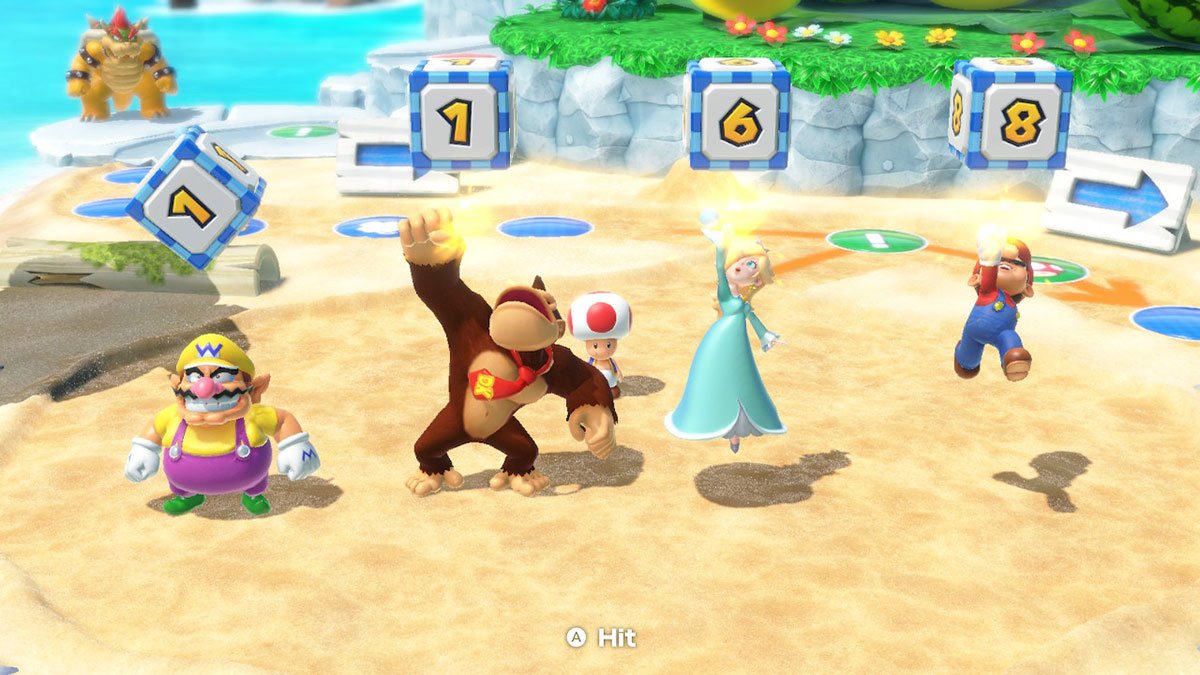 Still, the fact that online exists for minigames and fully-fledged Mario Party suggests NDcube has learnt from its biggest mistake with Super Mario Party. It didn’t get proper online support until earlier this year, almost three years after launch, probably only because the world was locked at home amidst a global pandemic and not shelling out on party games anymore. Proper online support is essential for a game so multiplayer focused, and I’m glad to see options to save and resume games with friends, making it more reasonable to commit to the full 30-turn slog.

I’m still an offline purist at heart, and Mario Party Superstars is a rare game from a time gone by that reminds us of the pure joy of a local couch competitive multiplayer game – where people you know actually come to your house, devour a mountain of pizza, and have a great time playing a game for hours. There’s even some in-game banter with stickers used as Nintendo emojis to spam your inner turmoil across the screen.

The killjoy inside of me wanted to disable those initially, but they’re actually a laugh in local multiplayer. Whether by design or accident they’re also strategically obtrusive. Yoshi proclaiming ‘what!’ is handy for obscuring part of the board during another player’s turn, which could be a cunning strategy once, but downright annoying after the 17th recurrence. 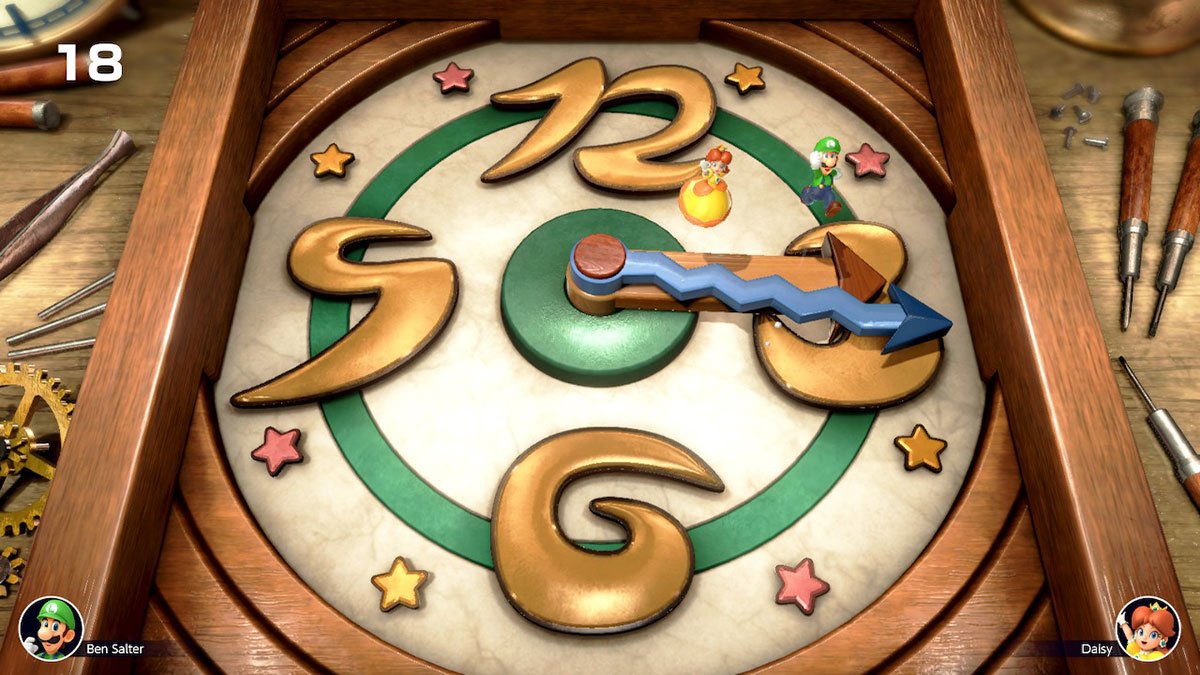 Nintendo returns to basics to deliver the best Mario Party game in years. By returning to the golden era of boards and leaning upon an accomplished roster of proven minigames, it doesn’t have to search for a gimmick to differentiate itself and can instead focus on what has already made Mario Party great.

Mario Party Superstars succeeds with a fresh coat of paint and just the right amount of quality-of-life improvements to keep it familiar yet far more accessible than dusting off your Nintendo 64. You just can’t beat Mario partying like it’s 1999 (and 2000 and 2001).

Mario Party Superstars was reviewed using a promotional code on Nintendo Switch, as provided by the publisher. Click here to learn more about Stevivor’s scoring scale.