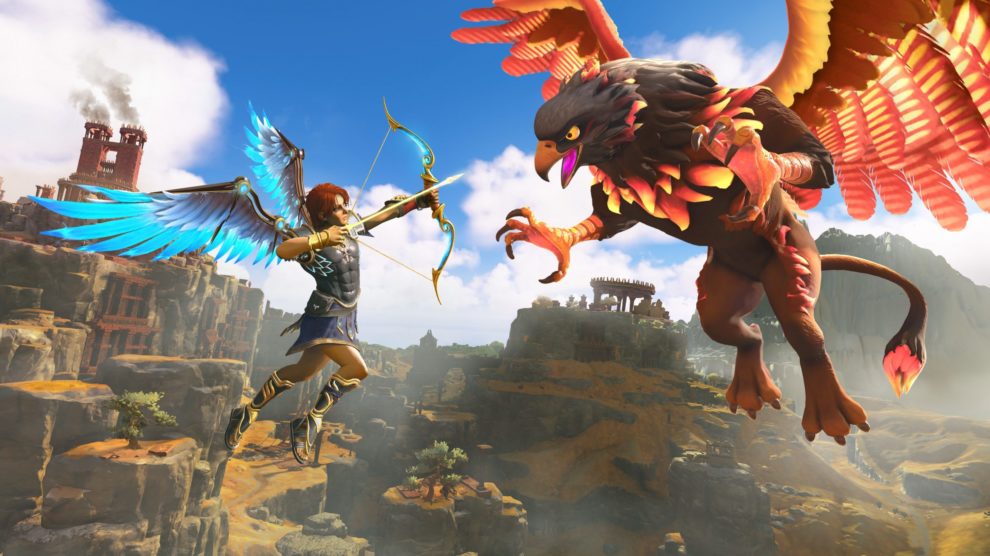 Ubisoft's open-world formula gets some help from the gods.

Immortals Fenyx Rising is the third large open-world game from Ubisoft in as many months, offering yet another map littered with things to do and side-quests to complete. For those worried about burnout, Immortals moves to set itself apart from its cousins with a departure from gritty realism and a stylised emphasis on Greek lore.

In my first preview of the new IP, I cut straight to the chase and called it a “mashup of Assassin’s Creed Odyssey‘s Greek mythology and, well, The Legend of Zelda Breath of the Wild‘s everything else.” Protagonist Fenyx is ruled by a health bar and another for stamina, with the latter dictating how long they can stay swimming in an ocean or how high they can scale a cliff. On a quest to rescue Olympian gods from the clutches of the evil Typhon, Fenyx is encouraged to head to the highest thing possible and then use Far Sight to identify points of interest to then investigate.

Those points come in many forms, with perhaps the most important being Vaults of Tartarus. Like Breath of the Wild’s Shrines, the Vaults will transport you to a mini-challenge area where you’ll either have to use combat or puzzle-solving skills to come out on top. The Vaults reward your effort with several items used for upgrades, including Bolts of Zeus to extend your stamina bar. Back in the overworld, Fenyx will benefit from main questlines involving the gods themselves but also from a series of different challenges dotted throughout. Some are timed races, another set offers up physics-based puzzles, and yet another features chests that are locked behind challenging enemies. As you engage with world around you, your end goal is always in mind: get stronger, then head to the centre of the world and take Typhon down for good.

Powered by Ubisoft’s Anvil engine and developed by Assassin’s Creed Odyssey’s Ubisoft Quebec, you can see Odyssey at the roots of Immortals. Beyond the Greek mythology that runs through both, Immortal’s combat system is near-identical when it comes to heavy and light attacks and a dodge mechanic. Quite honestly, combat is better in Fenyx Rising than in Ubisoft powerhouse Assassin’s Creed Valhalla; while your first attack likely sails through an enemy and those baddies are all gymnastics in the way they can randomly dodge attacks in Valhalla, this new release is smooth and solid.

Because of its mythological setting, Immortals Fenyx Rising also adds to combat and traversal with powers bestowed to the hero by the gods they save, offering up the Hammer of Hephaistos to treat enemies like nails and the Wings of Daedalus to glide, swoop and increase running speed. Additional powers provide horizontal dashes and vertical leaps, useful in both combat and exploration alike.

While these powers are great and all, it’s Fenyx’s buddy Phosphor who takes the cake. A literal phoenix, Phosphor can be upgraded to cloak yourself in combat and also serves as a ranged co-attacker, sending heavy damage-dealing projectiles like missiles to whose you ask it to. While some of the gods’ powers are useful, I’d always recommend funnelling Charon Coins into your pal before anything else. That being said, Immortals decides to limit your companion near the endgame, so try not to be fully reliant on your mate (read: I certainly did, and paid the price for it too).

Despite a rather cartoonish look, Immortals Fenyx Rising isn’t meant for kids. On higher difficulties combat is punishing, and the game is full of hours and hours of brain-testing physics puzzles in and out of Vaults. One of the best bits about the title is narration provided by the comedic powerhouse duo of Zeus and Prometheus. While Prometheus is rather straight-laced (being chained to a rock and having an eagle repeatedly eat out your liver will do that to you), Zeus is a right pervert. The way the two characters play off one another is delicious.

On the whole, Immortals Fenyx Rising strikes a fine balance between combat, exploration and puzzle-solving, though this all gets thrown into disarray near the endgame. After hours of working within the established world, Fenyx heads to a new area in which everything is upended — particularly by a new mechanic that greatly impedes progress. The area in question is approximately 1/5 the size of the rest of the map, and strangely, everything within it is marked as a “quest zone”. For a game that relies upon puzzle-solving to progress, having it suddenly drop any distinction between where one puzzle begins and another ends makes for some real frustration. Worse yet, there are very few opportunities for fast travel points in this region, so you essentially have to just continue on or know that you’ll have to come back later to start from scratch and want to tear your hair out again.

The occasional tooltip will pop up at this point, advising which of the myriad puzzles are essential to continue in the region; honestly, that only serves to make it more frustrating. Those same tooltips will tell you that you’re lacking a god-given power to continue on inside certain Vaults (though I managed to beat a couple without whatever powers I was expected to have anyway) or continually just assume you’re stuck whilst climbing (I never was). In short, they usually served no real purpose. As such, things can devolve into a discombobulated mixture of excessive handholding alongside head-scratching puzzles that are actually worthy of a bone or two thrown by Zeus.

Sadly, Fenyx Rising offers up some half-baked customisation. While it encourages you to mix-and-match traditionally gendered options to come up with a character that you feel best represents you, all of that work is done away with a vocal choice that locks your character into a male or female assignment. In the same vein, the more colourful and flamboyant armour options seem to have been intended for Fenyx’s female persona; on a male figure, they clip into the muscles of his neck. Once you see it, you can’t look away.

Though it liberally borrows from Breath of the Wild, Immortals Fenyx Rising is fresh and fun, offering up an exciting new IP I hope to see more of. That said, its endgame pacing issues certainly don’t do it any favours, nor does the timing of its release. Forgetting about the fact that it’s days out from Cyberpunk 2077, Immortals is still Ubisoft open-world enough to make it a bit of a drag, especially after the epic undertakings that were Watch Dogs Legion and Assassin’s Creed Valhalla. Near its end, I was more happy to be done (and to try to get back to finishing Valhalla after more than 60 hours) than wanting to play more. In a different period of time, I doubt I’d be having that problem. 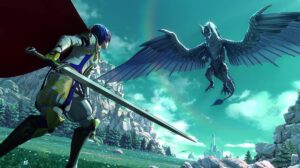