Hotline Miami is a game that first debuted to PC gamers in late 2012. The game, once described as a “top-down f***-‘em-up,” follows a story of pixelated ultraviolence as you strategise, organise and murderise your way through levels of increasing complexity. The game recently arrived to PSN, giving us the chance to experience it in portable form for the first time on the Playstation Vita (though you can play it on PS3 too if you’d like).

The game follows an unnamed protagonist in 1989 as he receives a series of thinly-veiled phone calls directing him to kill. Very little is explained to the player initially, with only a few surreal conversations with masked men who direct you to do as you’re told. Donning one of a series of perk-giving animal masks, the protagonist is directed to location after location and made to eliminate all those who stand in his way. 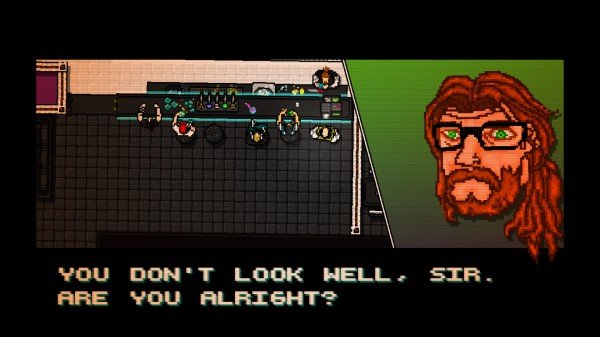 The gameplay in Hotline Miami is simple and brutal. The player is presented with a top-down view of the world, with no detail obscured – you can see every room, every enemy, every obstacle in your way. Using a selection of guns and melee weapons it is up to you to figure out a way to make a path through each level to take down every living thing in front of you. Every kill is visceral and blatant, with blood and gore a-plenty. But this isn’t the only example of brutality in the gameplay; in the world of Hotline Miami, it only takes a single hit to take you down. A single bullet or swipe of a blade from an enemy will take you down, and they will not hesitate for a second. There’s no sneaking up on guys here, because they will turn around and take you down. Kills have to be fast and decisive if you want to make it to your next attack.

Thankfully there are a variety of ways to take enemies down. Melee weapons require you to get up close and personal but give you a silent kill, and guns can be used at range but will draw other enemies to you. Timed properly, a door can be slammed open in an enemy’s face to stun them, allowing you to take them down silently without risk of counterattack. You can also target an enemy from a distance and throw your currently equipped weapon at them – guns and most melee weapons will stun them, while bladed weapons have a chance to kill instantly.  This is also a chance to decrease the threat they pose, as the game’s AI usually forces them to pick up the weapon you threw over the one they were holding, allowing you to downgrade them from a gun to a melee weapon at times.

Over the course of the game the difficulty is ramped up incrementally – rooms will contain more and more enemies, tougher enemy types are added who can keep moving after being hit for a short time, and attack dogs unaffected by thrown weapons start to show up. The ability to pan around the level to a limited agree gives you the chance to plan ahead somewhat, but enemies do move somewhat unpredictably. While they tend to follow the same path, they will occasionally break from this and ruin your set plan, keeping you guessing and re-trying.

Luckily, the game’s checkpoint system is well executed. Each death will take you back to the start of the floor/area you’re in, but the process is instant. Given how quickly an attempt can be ruined, the instantaneous nature of the restart is a godsend. If the game were to have the kind of long reload times of many triple-A titles, the game would be unplayably frustrating.

Adding to this ease of play is the game’s audio design. In a nice bit of continuity the soundtrack will play non-stop, regardless of your dying and restarting. Given, again, how quickly things can turn sour, you wouldn’t want to be listening to the same four seconds of music over and over. This gives the game a sense of flow that makes the whole experience very cohesive, regardless of how many times you make a corpse of yourself.

Speaking of corpses, the audio around your arsenal is equally high-quality. Gun effects are appropriately meaty, and each strike of a baseball bat or katana has a visceral quality to it that you almost wouldn’t expect of game with relatively ‘simple’ graphics. At the start of play on the Vita, Hotline Miami recommends you play with headphones and it’s a suggestion you really should take. The audio takes on a whole extra dimension when presented this way, and the Vita’s speakers really can’t compare. 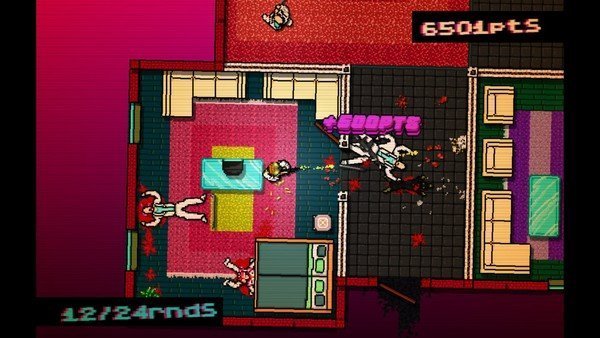 If there’s one thing I have to mark the game down on when presented on the Vita, it’s the controls. Though the twin thumbsticks do offer greater control than the PSP ever did, it still feels lacking for this title. Targeting specific enemies for gun or thrown attacks is accomplished by tapping on the touchscreen, and the same is required to de-target them. I often found however that I’d graze the edge of the screen during normal play, leaving my character randomly targeting some enemy in another section of the map. With the speed at which you approach combat, this ruined a number of attempts for me. Likewise, scrolling around the map to get a sense of what lies ahead requires you to use the touchscreen. When you’re mid-level, this not only obscures part of the screen but leaves your hand off the controls if you’re suddenly caught in the crossfire. It’s one of the few cases I’ve found with the handheld where I’d PREFER to be using the back touchscreen, but the option isn’t there.

All in all the game is a well put-together title. The addition of cross-play with the PSN release allows you to move the same save between your console and handheld, and also choose the platform whose control scheme you prefer. Regardless of the gripes I had here, I’d still rather play on the Vita. The intensity of the OLED screen makes the pixel art of Hotline Miami pop in a beautiful way, really doing the art’s 80s neon colour scheme justice. If you have the opportunity, give murder a chance on the Vita.