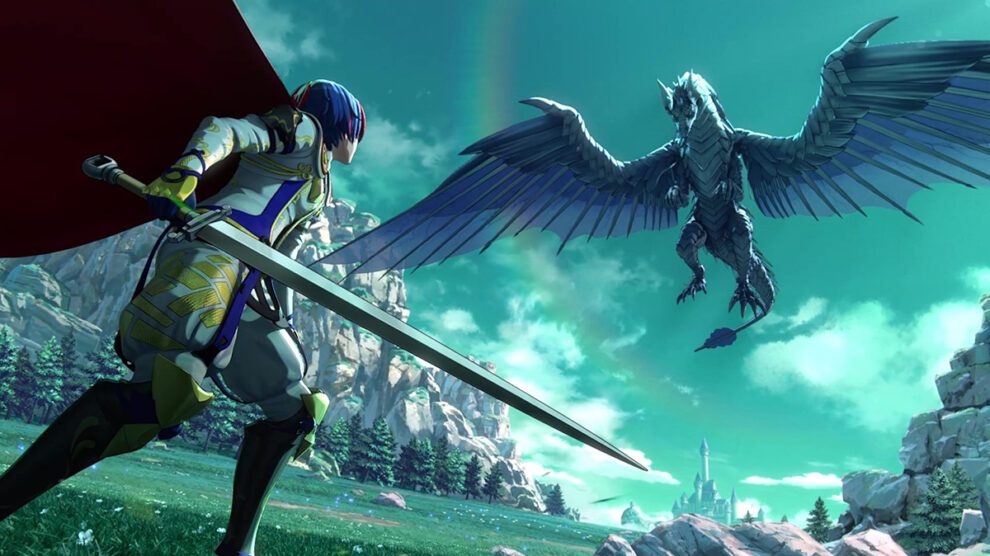 Over the past few years, the Fire Emblem series has entered its own personal Renaissance – when 2013’s Awakening became a reprise for the series rather than a swan song, each subsequent game has only boosted the franchise’s widespread appeal. Fire Emblem Heroes continues to dominate on mobile, and 2019’s Three Houses (and the subsequent 2022 spin-off-slash-sequel Three Hopes) have created a whole new generation of gamers asking the question if love can bloom… even on the battlefield?

Three Houses’ branching storyline and richly-populated cast of characters set an all-new bar for Fire Emblem, so expectations are high for 2023’s new entry to the SRPG pantheon: Fire Emblem Engage. Can the Divine Dragon and friends measure up to the heights of Bernadetta, Raphael and Claude? The answer to both questions posed above is yes.

As is usual for titles in the Fire Emblem series, Engage introduces us to an entirely new cast and world to wage war across – the continent of Elyos, and its four kingdoms. A millennium before our story begins, the peoples of Elyos fought a long war against the Fell Dragon before finally managing to imprison it, leading to a peace that lasted a thousand years. In this time, Queen Lumera the Divine Dragon oversaw the four kingdoms while also caring for her child Alear, who remained in an eternal sleep. Just as unrest begins to rise across Elyos, Alear awakens (that’s you!) and finds themselves in the center of a conflict that threatens to throw the whole continent back into war… just as signs begin to appear that the Fell Dragon may rise again.

Structurally, Engage takes a different approach to Three Houses both in its gameplay loop and by introducing some new combat mechanics to the mix. The biggest change comes from the Emblem Rings, magical jewellery that each house the Emblem spirit of the hero of another world. These Rings introduce the leads of past games into the mix, including series mainstays lie Marth, Roy and Ike that players may recognise from Super Smash Bros, more recent characters like Three Houses’ Byleth and Awakening’s Lucina, as well as deeper cuts for long-time fans like Lyn from the 2004 GBA title Fire Emblem The Blazing Blade or Sigurd from the Super Nintendo title Genealogy of the Holy War, a game that never officially made it beyond Japanese shores. 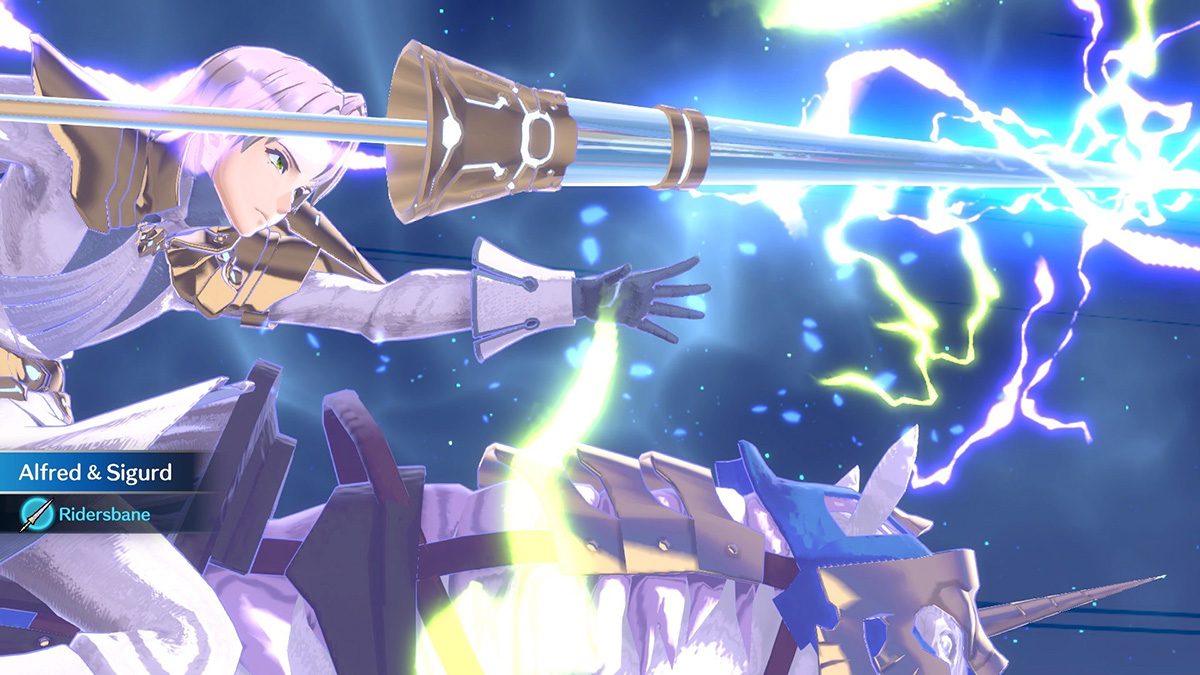 When equipped to one of your party members, these Emblem Rings imbue them with boosts to their stats, access to their unique weapons as well as special abilities unique to that character, like Byleth’s role as an Instructor in Three Emblems allowing him to boost the EXP gain of adjacent units. When wearing a Ring, units can also Engage with the ring, allowing them to fuse together into a more powerful form for several turns. Combining the right Ring with the right unit can definitely turn the tide in battle – pair a slow-moving heavy-hitter with a mounted Emblem for instance, and they suddenly have the ability to zoom across the map to do real damage where they’re most needed. As each unit raises their bond with an Emblem they also gain the ability to inherit their special skills, allowing you to customise each unit more and more as they spend time with the various Rings.

Strategy like this is very important in Engage, because mainstay characters aren’t the only thing coming back from the series’ past – this game also brings back the tougher difficulty of older titles as well. Not to worry, you can still choose whether or not to enable permadeath for your units! But you’d best be prepared if you do enable it, because a fight can turn sideways fast in this game. You’ll need to carefully consider each move if you don’t want to have the weaker links in your team broken immediately, because your enemies are fighting to win. Thankfully the Divine Pulse-style rewind mechanic returns in this game in the form of the Time Crystal, which allows you to walk back a number of actions if things go pear-shaped.

Another new mechanic introduced for combat is the ability to Break your foes. At its core, Fire Emblem games work on a rock-paper-scissors mechanic; axes are strong against spear units, spears are strong against swords, and swords are strong against axes in return. When you line up this type advantage in a combat encounter, the opposing unit will Break, preventing them from counter-attacking in this or any other fights until their next turn. Especially when taking on boss enemies, this comes in extremely handy – nip in with a weaker unit that has the type advantage, stop a bruiser in their tracks and then let the rest of your team wail on them with no fear of counter-attack. The same can happen in reverse as well, however, so managing unit placement and keeping an eye on how close the enemy can get is an ever-present concern in every fight. 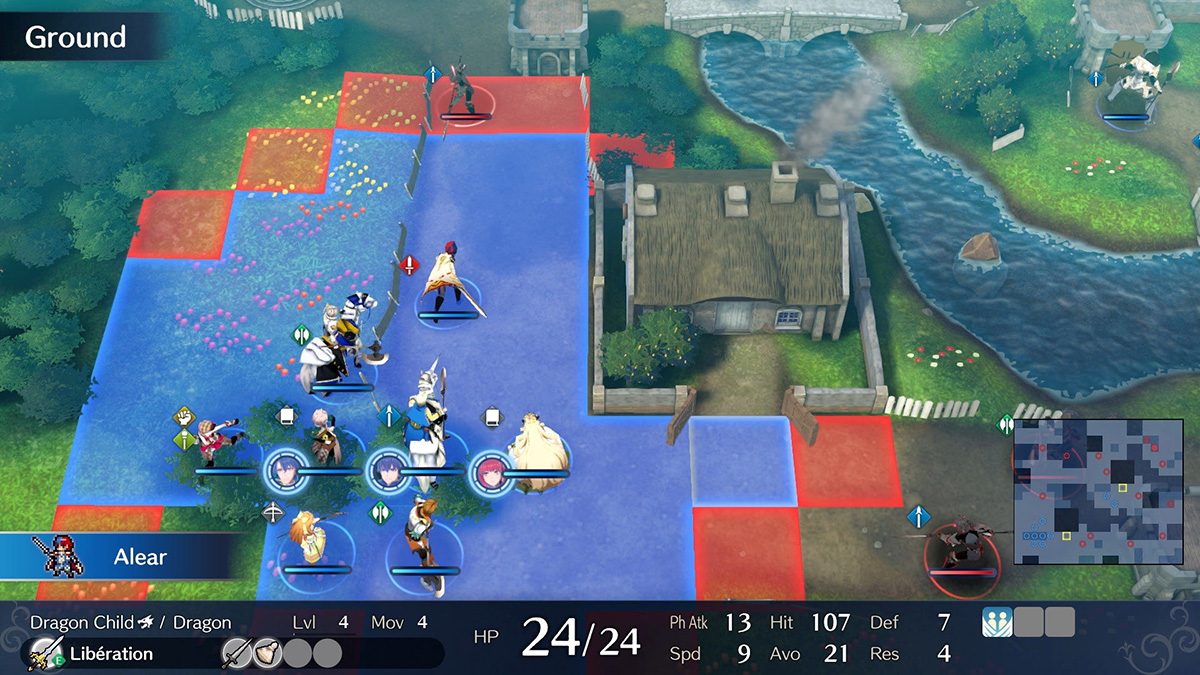 One thing I did find lacking here is the loss of the adjutant system from Three Houses – an option that let you pair a unit with another on the battlefield as their second, helping you to level up weaker units without putting them directly in harm’s way. While there are plenty of skirmish battles available between each major story mission they do scale with the overall levels of your army, meaning that if you have favoured units to take into every fight, the overall difficulty of combat can outpace the stragglers in your army. Especially if you were playing with permadeath, I can see how this would make keeping your whole army up to snuff a very frustrating thing to do. In my time with the game, I’ve definitely found that some characters have fallen to the wayside because in combat, a single fight can be all it takes to wipe them out entirely. One fun new addition however is that after each fight, you can explore that battle map by foot to find items, adopt animals to take with you, and speak to your various teammates for some extra dialogue. It’s a great way to take a look at just how detailed and vibrant the world of Engage is, especially compared to the more muted tones of Three Houses before it.

That all said, there’s still plenty to do in between each battle to help bolster your army for the battles ahead. The floating island of the Somniel is your base of operations in Engage, Alear’s home that slowly becomes a vibrant hub for your forces as the game progresses. Units can cook meals to raise the support level between units and boost their stats for the next fight, you can train units to boost their EXP or bond level with the Emblem Rings, participate in a push-up minigame and, of course, go fishing. Over time more and more side activities open up in the Somniel to let you wind down and gear up between fights. Gift-giving returns once again, allowing you to curry favour with your teammates with just the right present, though the full breadth of gift-giving options doesn’t open up until surprisingly far into the game.

Support dialogues come in two different flavours in Fire Emblem Engage; Support ranks between the various units in your army, and then Bond levels between each unit and the Emblems they’ve worked alongside. Supports seem to split between more goofy interactions or much more serious, character-driven moments, depending on the pairing. While one pairing might have two people talking about their favourite kind of meat to eat, another could tell the tale of two younger kids having recurring nightmares about their older, heir-to-the-throne siblings being killed in battle. For the most part these do feel less emotionally rich than the supports from Three Houses, though there are definitely gems in there. By contrast, Bond events with the Emblems are blink-and-you’ll-miss-it short. Most of the initial C-rank bonds amount to “Hey, it’s nice to work with you!”, and each will typically be only two or three lines each, compared to the longer-form supports. While some might have a little more depth to them depending on the thematic links between the two (Divine Dragon Alear and the half-dragon Corrin have a bit more in common than most, for instance), they do seem strangely undercooked. For a game that revolves around reverence for the series’ history, it doesn’t seem to put a lot of stock in getting to know the Emblems for newer players who may be less familiar with them. 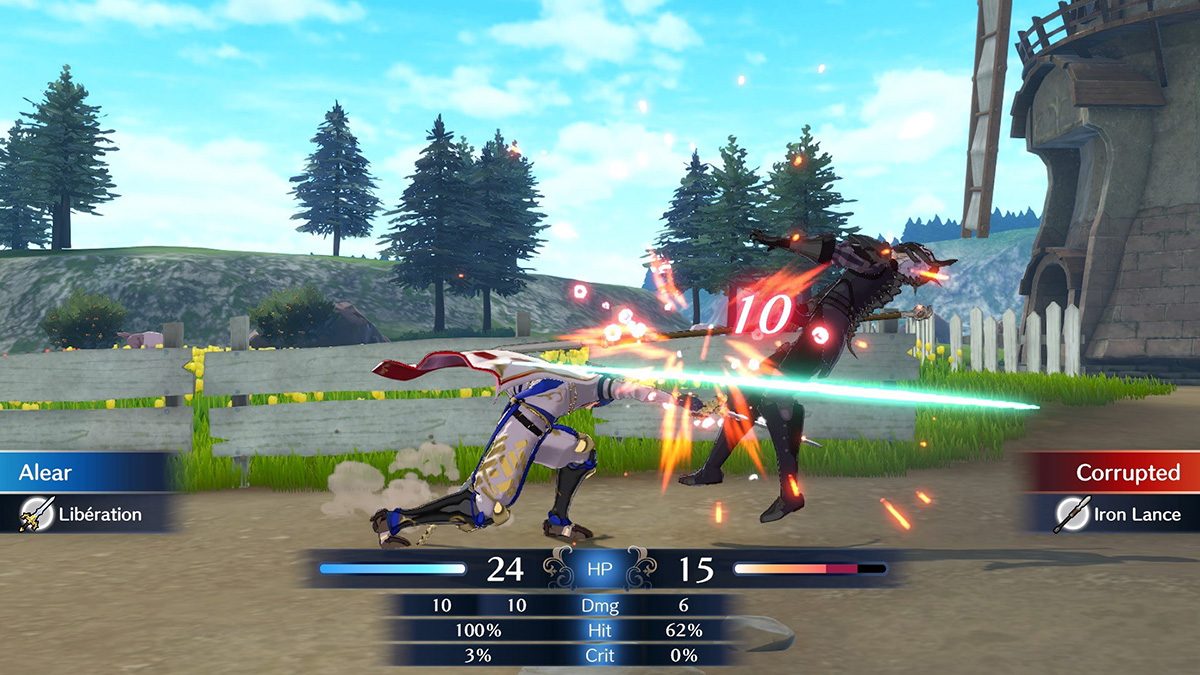 Lastly, let’s discuss the kawaii elephant-chan in the room: this game is anime as hell. Complete with a full-on anime opening movie, Fire Emblem Engage is taking no half-measures in setting itself apart from previous entries that brought a more serious, grounded look to the war table. Meanwhile, Engage is bright, colourful and unafraid to give its character designs dinner-plate-sized eyes. It’s a stark contrast to the games that preceded it, and one that’s been very divisive among fans… but honestly? It has grown on me. While a handful of the female designs do lean into the balloon-chested tropes that can ick some players out, I’m happy to report that the game is devoid of any of the over-sexualised content that usually pairs with those designs. What we’re instead given here is a diverse cast full of distinct designs, existing in a gorgeous world rendered in bright colours that really shows off what the Switch is capable of, when given the chance – the game is absolutely stunning, especially on the OLED model’s screen. While the cast’s personalities do boil down to one note, this is nothing new for Fire Emblem – with such a large cast, not everyone can have an epic backstory, and it’s enough to have one key characteristic to tell them apart by. While I’ll admit that the backstories aren’t as serious or deep as those found in Three Houses, the tone of this game is lighter overall and the cast reflects that.

After dozens of hours traipsing around the world map of Elyos, I’ve found myself pleasantly surprised with what I’ve found. The shift in tone and style helps set the game apart from what came before, and the new mechanics bring a breath of fresh air to combat while paying tribute to all the games that came before. I was surprised to find a level of difficulty that Three Houses had, for the most part, not showcased – paired with a story with enough twists and turns to keep me interested. While players may be tempted to judge Fire Emblem Engage on the art style alone, I strongly suggest giving it a try before casting judgement; you may just find that this is one of the best Fire Emblem games to date. 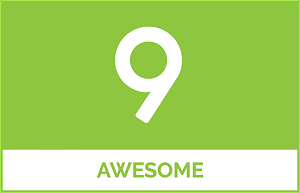 Fire Emblem Engage was reviewed using a promotional code on Nintendo Switch, as provided by the publisher. Click here to learn more about Stevivor’s scoring scale.