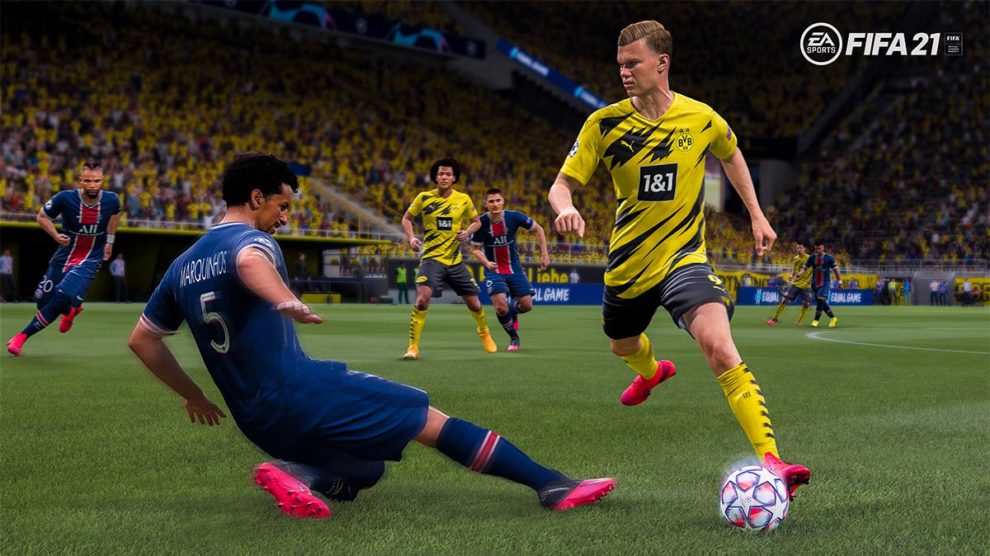 FIFA has been alternating between tweaking attacking and defensive gameplay all generation, while introducing — and quickly moving on from — a bevy of gameplay modes and innovations. The Xbox One and PS4 have seen the introduction of women’s teams, the addition of UEFA competitions, character development in The Journey and a return to the timbre of FIFA Street with Volta football. We have seen Ignite come and go before bowing to Frostbite, and it sure feels like we are forced to learn a new free kick and penalty system annually.

Each instalment has had a major feature or enhancement to spruik, often still there but relegated to the bench the following year. That isn’t really the case with FIFA 21. It’s an attacking year, so the pace is up marginally, but it’s mostly a polishing of what’s already here as we transition to the PS5 and Xbox Series X/S.

The usual tweaks are aplenty, but there isn’t anything worthy of a new tile on the home screen. Volta retains top billing after refreshing the package last year, but it’s more of the same, and Ultimate Team will again garner the most attention. However, Career mode journeymen will rejoice that their overlooked offering has finally been given the substantial upgrade it deserves.

Career mode has been my goto in FIFA for the past decade. Other options have come and gone, but Career has always remained stable — which is also why it started to grow tired years ago. Besides a handful of minor additions barely worth considering, it has essentially remained untouched all generation, until now.

As the manager, you now have greater control over your squad and the trajectory of individual players. Off the pitch, create player development plans to improve the skills of youngsters and ward off father time for veterans. Most players approaching their mid-30s are put out to pasture by FIFA’s skills stats, but now you can identify where they are past their prime and train those areas to slow the decay. Players can also be assigned new positions to train, and while it’s not realistic to develop a winger into a starting goalkeeper, it gives you much greater control over your team.

That control extends to game day with the introduction of interactive match simulation. The old option is still there, now called quick sim, but the preferred choice gives you control during a simulation. Match data presents the state of play at a glance, allowing you to substitute players or change tactics, and should the AI just not cut it, you can choose to take control and start playing at any time.

It works really well. Whereas I used to play several games in a row, and then get bored and sim a few to progress the season, now I play the key matches and partially simulate less important games before taking control in the second half. For highly skilled players beyond professional, however, it won’t cut it, as the difficulty seems to have little bearing on the result, and both sides are more accurate than usual during a simulation, leading to high scoring matches. 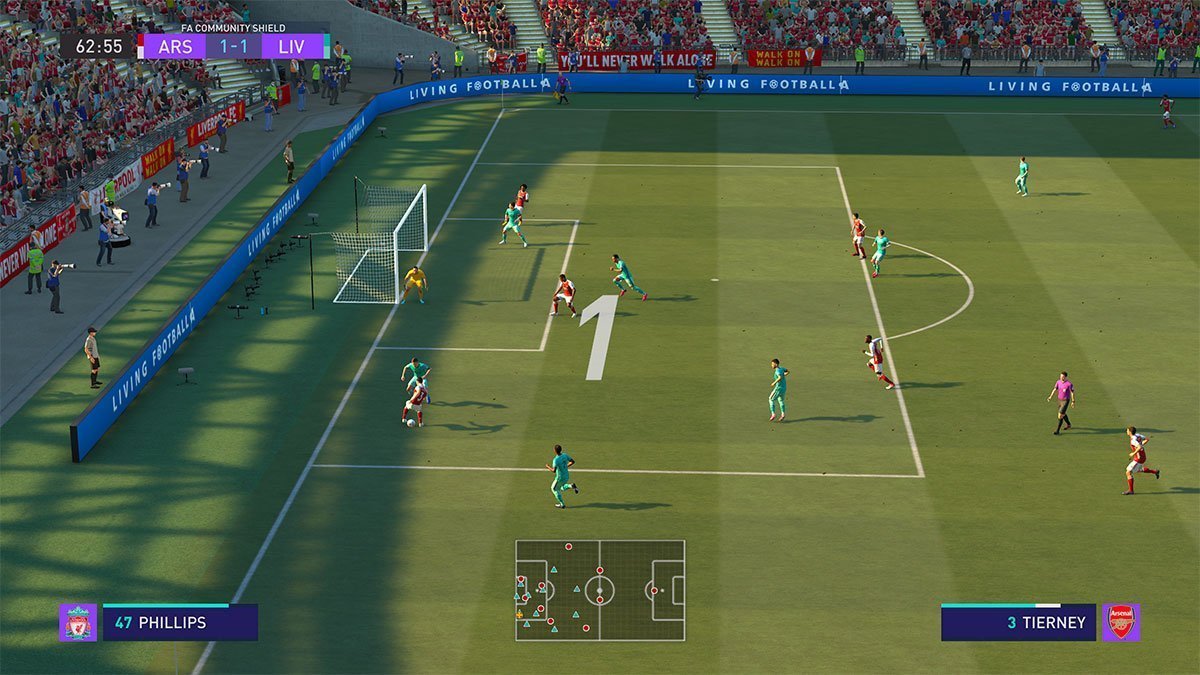 Training puts more emphasis on preparing players for matches against improving their abilities. Increased training loads may be beneficial longterm, but will have players struggling to run out a full 90 minutes. We’ve seen all of that before, but the sharpness system determines the likelihood of a player performing when it counts. It’s not perfect and could easily be ignored, but there’s finally a metric to use when promoting players from the reserves; you have some idea of who deserves the call up.

The transfer hub boasts a bunch of new features, and while the mimed manager-meets-agent cutscenes are excruciatingly repetitive (and luckily skippable), there is greater control to negotiate loan or buy options. AI initiated offers, now from your assistant manager as well as other teams, also seem a lot more realistic.

It’s still not perfect, though, as the formula never diverts. If a player wants a three year contract, they will always accept a two or four year deal. Likewise, negotiations of wage bands and performance clauses are easy to predict, and ever go off book. A player will always accept an offer either side of what they wanted, and you can never convince them outside of those parameters.

Outside of the welcome additions to Career, there aren’t any monumental leaps forward this year. Volta is still a fantastic newish mode, and ideal for casual fans and newcomers. I’ve had friends fall off FIFA several years ago, now unable to get back into it, pick-up and play Volta with ease. It’s a much more accessible pick-up-and-play option, but very similar to last year’s offering with an expansion to online co-op.

While I really enjoy Volta, FIFA 20 will suffice if you’re craving some street-style three, four or five aside action. The Debut story mode continues to fill the void left by the departure of The Journey, and ensures Thierry Henry receives his marketing cheque. But even with a considerably shorter completion, clocking in at under an hour, I’m still not sure many players will obtain its Trophy or Achievement.

Ultimate Team also remains very familiar, with co-op being its pitch to upgrade. You can team up with friends via online play to work together to unlock rewards, or play events either cooperatively or competitively. There is little enticing reason to upgrade for FUT alone, but whether it be by design or good fortune, a new way to interact with friends remotely has come at the perfect time.

FIFA 21 has arrived amidst the chaos of an unprecedented worldwide sporting landscape — although it is very reassuring to return to familiar football in a virtual setting, crowds and all — so there’s certainly never been a better time for more co-op features, but that is not its biggest challenge. As a console launch year, the game you can play today is only part of the cross-gen package. We won’t really know the full story until FIFA 21 arrives on PS5 and Xbox Series X/S next month, but it’s a very different situation compared to the last console changeover.

Back in 2013, EA followed a similar, yet different, blueprint by first launching FIFA 14 on PS3 and Xbox 360, and following a few weeks later with the arrival of the PS4 and Xbox One. It adhered to the historical design, with an essentially different game running on a different engine (although we now know Ignite was more marketing buzz than revolution). You had to buy the game twice, and if you did, you probably tossed the last-gen version, never to return. The incentive, even for devout FIFA fanatics, was to hold off playing FIFA 14 until the new consoles arrived, and for many annual supporters, it was likely the last time they didn’t upgrade on day one.

This time around, there is no reason to wait. EA is offering a free upgrade to PS5 or Xbox Series X/S, so long as you remain within the same console family and do so before the release of FIFA 22. Ultimate Team and Volta save data comes across, but other modes don’t, which is unfortunate considering Career is the bread and butter of FIFA 21, and you’ll have to start from scratch on PS5 or Xbox One. Whereas FIFA 14 was a very different experience, expect FIFA 21 to play almost identically across generations, with player fidelity a little closer to real life on the new machines.

I have gotten caught up on the intricacies of Career mode finally being given the attention it deserves; that’s partially because it is my favourite mode, but also because there’s little else worth highlighting. On the pitch, FIFA 21 is more of an incremental upgrade, and unless you were diehard devotee to FIFA 20, you won’t really notice many changes.

It’s an attacking year, with the focus on player positioning, creative runs and the new Agile Dribbling mechanic. In conjunction with the slide tackle being taken down a notch, attacking players are able to showoff their flair and creativity as they get past defenders with greater ease. Being able to inform a teammate’s run before passing to them opens some new options, and decreases your reliance on the AI’s competency. You can even lock to a player and take control before passing, giving the AI control of the player with the ball and trusting them to make the pass by pressing both sticks, but my muscle memory is struggling to even contemplate that opportunity. 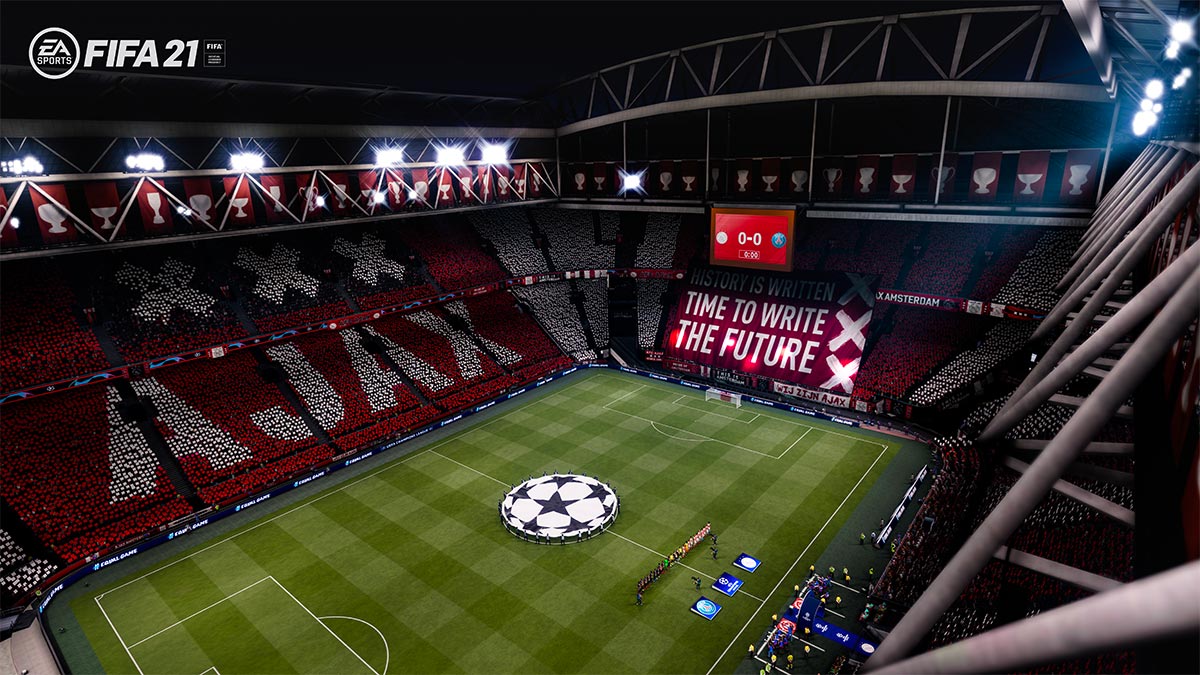 Combined, these all serve to increase the pace of FIFA 21. It doesn’t return to the supercharged slingshot of earlier this generation, but FIFA made a concerted effort to slow the speed of the game a few years ago, and has been increasing the throttle since. It’s personal preference as to which suits your style of play, but at launch, FIFA 21 encourages relentless pressing and favours speedy wingers and fullbacks — expect similar tactics from everyone online.

It still finds a nice rhythm, especially against AI opponents, but does award greater value to pace above all else once again, which is a step backwards after the FIFA 17-19 era allowed slower players to have more of an impact. Volta has had an impact overall, as the pacing for street football is perfect, but still an issue in the full game.

It took an entire generation, but I am delighted to see Career mode finally have its moment in the spotlight in FIFA 21. The changes to Career are all for the better, even if some still feel rudimentary, and it breathes new life into a staple that has felt somewhat ignored. The rest of the package comes across as both the culmination of a generation and a cross-gen game. Any new ideas have clearly been held back for when the new consoles are actually obtainable by the masses, but FIFA leaves the Xbox One and PS4 in a pretty good place — and with some extra pace — in 2020/21, still with plenty of scope to go from good to great next-generation.

FIFA 21 was reviewed using a promotional code on Xbox One X, as provided by the publisher. Click here to learn more about Stevivor’s scoring scale.