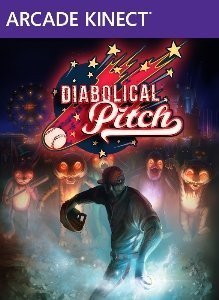 When I first heard the words “Kinect game” and “Suda51” in the same sentence, I literally had to pick my jaw up from off the floor. I imagined all the potential. The insane story, the out of left field characters, the interesting gameplay mechanic and most of all a new game from Grasshopper Manufacture I could fall in love with. Alas, ’twas not to be and Diabolical Pitch, unfortunately, struck out pretty hard.

The basic premise is that you play as a famous baseball pitcher who has blown out his arm ruined his career. One night while out driving, he comes across a strange carnival and is given a bionic pitching arm by the demonic half man, half animal residents. The story is suitably B-Grade and cheesy and the terrible voice acting fits perfectly. However, once the gameplay begins, its a long, long slog through the same repetitious gameplay for several hours. Your available actions are pitching, kicking (when an enemy gets too close), catching and the eponymous “Diabolical Pitch.” Pitching is achieved by simply making a throwing motion in the general direction of the enemy and you rarely miss since aim-assist seems to be ramped up to 11.

You are able to select, at the beginning of the game, which arm you prefer, which is a nice touch, and it frees up your other arm for aiming. Simply raise your non-pitching hand up and a reticule appears on screen. If you manage to hover the target over an enemy for a few seconds you will lock on and score a headshot.  Kicking is achieved, by, well…kicking. If any enemies manage to get close to you, simply flail your leg outwards and the demonic bear or bunny will be booted off the screen.

Catching occurs once in a while and is instigated by the aforementioned bunnies. They occasionally throw a glowing blue baseball at your character which kicks off a canned animation and requires you to quickly bring up both hands in front of your chest. Succeed and the game continues. Fail and you get a strike. Three strikes and you’re out. Strikes are also accrued by being damaged by enemy melee attacks.

The Diabolical Pitch is a little different. These are special unlockable super attacks, of the fire, electricity, cannon variety. Once you have powered up and are able to pull one off, each is different. For the fire pitch you raise both hands above your head and bring them both down together. For the cannon you hold out one arm sideway and one forward and then move your outstretched arm to aim at baddies. The Diabolical Pitches do much greater damage than a standard pitch and can help out if you are getting overrun, but generally they are just a fun and flashy way to cause a bit of extra mayhem. And that my friends, is pretty much all there is to Diabolical Pitch.

Your character remains fixed in one spot while you throw baseballs at an increasing number of enemies. Over and over again. The gameplay never really changes up for the duration and while there is a scoring and roulette modifier system they add little to the proceedings. I’ve never been too sure if it’s my set up or the Kinect in general, but once again I found the game unresponsive and frustrating at times. On occasion I would have to make the throwing motion 5 or 6 times before it registered and by then I was swarmed with enemies up close and trying to catch multiple bunny pitches.

Aside from the repetition, Diabolical Pitch, is also painful to play for extended periods. I’m not terribly unfit, but I found that I was really tired after just one round and each world is made up of 5 rounds. After, every round I also found my shoulder getting quite sore, which is surely an indicator to stop playing.

For an Arcade game I was impressed with the graphics, the style and the overall presentation, however even the cheap price can’t make up for the ultimately shallow, boring, physically painful and incredibly repetitive gameplay. My suggestion: try before you buy.