Home » Reviews » Destroy All Humans Review: A blast from the past 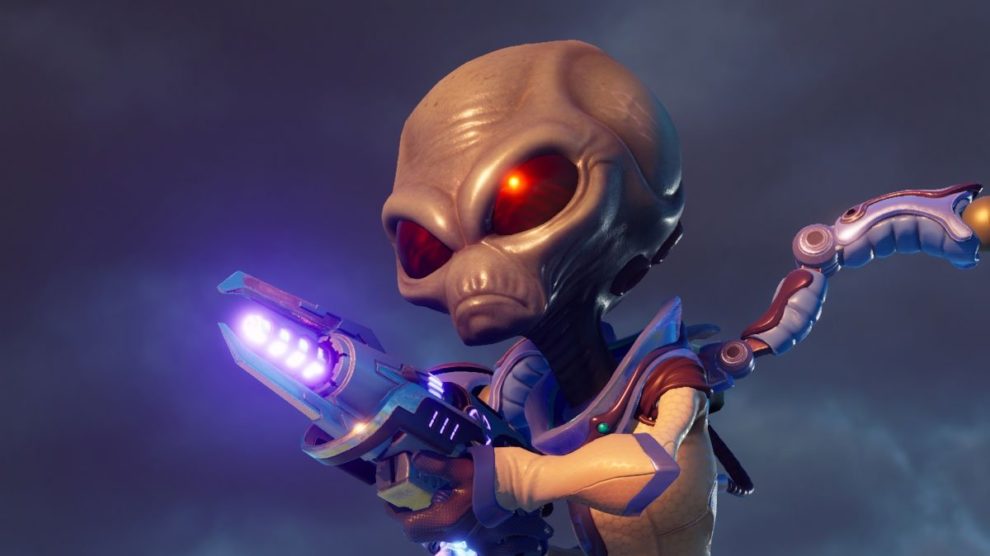 Destroy All Humans is out now — or rather, it’s been available for a day or two to those who’ve pre-ordered — and that right there is rather telling. Simply put, the remake of a 2005 plays like one, for all the good and bad that can be associated with that… so hopefully you knew what you were in for if you pre-ordered.

Developed by Black Forest Games, this remake is set in 1950’s America; there, an alien clone named Crypto-137 is brought to life (RIP 136) and is tasked to harvest human DNA in order to propogate his own race, the Furons. Destroy All Humans takes place over a handful of missions set in six main sandbox areas. Missions are rather straightforward, with optional objectives to meet alongside story-based ones playing as Crypto or piloting his flying saucer; four main challenges can also be completed within each location. All up, it took us around 10-15 hours to complete the entire affair. 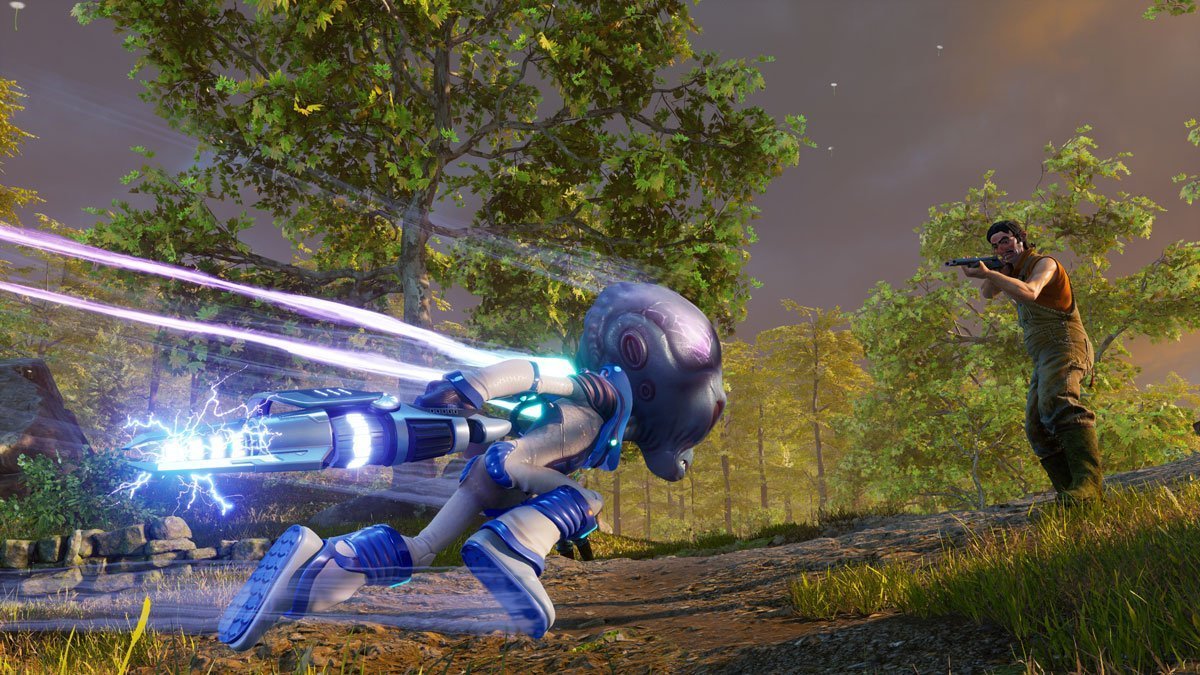 The result is a game that’s enjoyable enough but still pretty rough around the edges. In my quest to complete all optional objectives in missions — something that awards a hefty 90GS Achievement — I found myself purposefully dying in order to restart from a checkpoint; it should be noted that’s the only way to do it as the pause menu only offers the ability to restart the entire level. Most deaths I found myself transported to an area of the map I’d never seen before — usually a rooftop — completely removed from what I was doing before.

Physics are also pretty wonky, especially when Crypto’s PK ability is put to use. This wouldn’t be as noticeble, perhaps, if a number of Achievements weren’t directly tied to this. One in particular — in which you need to set an object on fire and use it to then kill a human — proved the most problematic. I chose to set a hay bale alight and then marvelled as I picked it up and threw it a group of onlookers only to see it ricochet off their heads and then fly halfway across the level’s enormous map. Repeatedly.

Black Forest Games seems to pride itself on reusing the game’s original vocal performances, though I’d say this is to the title’s detriment. The audio sounds old, cracked and distorted in some areas and while this might (emphasis on “might”) be acceptable in a post-covid world with a sound crew working from home, Destroy All Humans doesn’t get that free pass. The audio sounds like it’s been recorded with the same skill and care as Stevivor’s Friendly Fire Show podcast; as much as I love our show, that’s hardly a compliment. 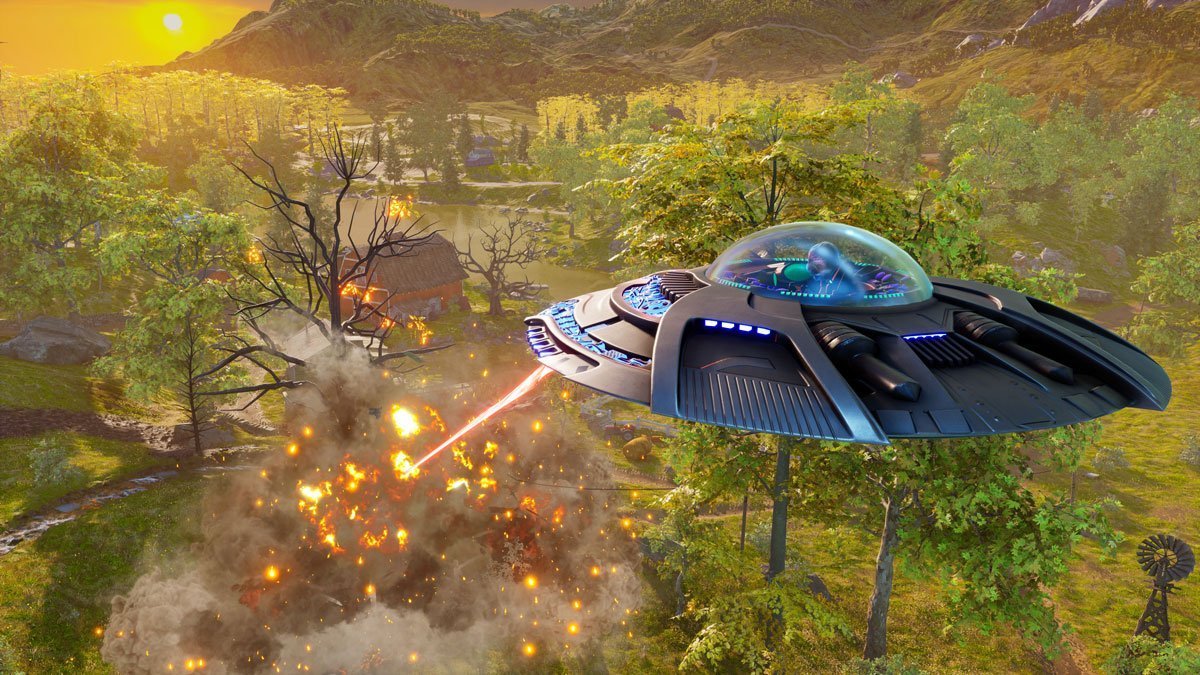 For a game that’s so reliant on NPCs, Destroy All Humans really sticks to its 2005 roots. There are hardly any unique humans walking about; most wear the same clothing and maybe have a different colour haircut. Crypto is forced to use stealth for a considerable portion of the title and that’s dependent on a mind-reading ability to power up; here, you’ll repeatedly be thrown the same stale voicelines from NPCs. None are particularly funny, but some are just down right awful — a soldier referring to the “don’t ask, don’t tell” policy immediately comes to mind.

Despite all these criticisms, Destroy All Humans can be quite enjoyable when everything just clicks. It’s equally as fun to Holobob into an environment and blend in as a human as it is to fly around, guns blazing. An ever-escalating sandbox can get quite tricky too, requiring you to think on your feet, setting an explosive alight as you’re ripping a brain out of someone’s head to keep your shields up, boosting and dashing away from rockets fired by tanks. Most optional challenges (and objectives in missions for that matter) are quite fun, making you perform in ways you mightn’t otherwise. While its humour is certainly dated, some jokes still manage to land.

Destroy All Humans isn’t bad, per se, it’s just bland; a fresh coat of paint on a dated game, clunky in some areas and polished in others. If you received a free code (like I did for review) or are gifted this, jump on in. Would I recommend you purchase it? Not unless you’re a huge fan of the franchise or you like some relatively easy Achievements.

Destroy All Humans was reviewed using a promotional code on Xbox One, as provided by the publisher. Click here to learn more about Stevivor’s scoring scale.