To understand the Danger Zone series one needs to first understand the roots of the Developer, Three Fields Entertainment. The heads of this seven-person team founded Criterion Games, and in turn developed the iconic Burnout series. After parting from Criterion and EA they founded their new studio and set out on a mission to build a spiritual successor to their Burnout legacy.

Introducing Danger Zone 2, which describes itself as an arcade crash test experience. It puts you in a car at one end of a long stretch of road or highway, and sends you hurtling towards the other end at breakneck speeds. Your goal is to cause as much financial carnage by way of “checking” traffic and and finishing at a busy intersection called the Danger Zone in a crescendo of vehicular destruction, fire and explosives.

If this sounds familiar it’s because this is a shameless clone of the popular Crash mode from the early Burnout games. Three Fields has managed to add a hint of depth to this simple concept though with each course featuring an optional bonus task to complete which usually involves taking out a certain number of a specific vehicle type but might also include a set number of vehicle near misses or jumps. 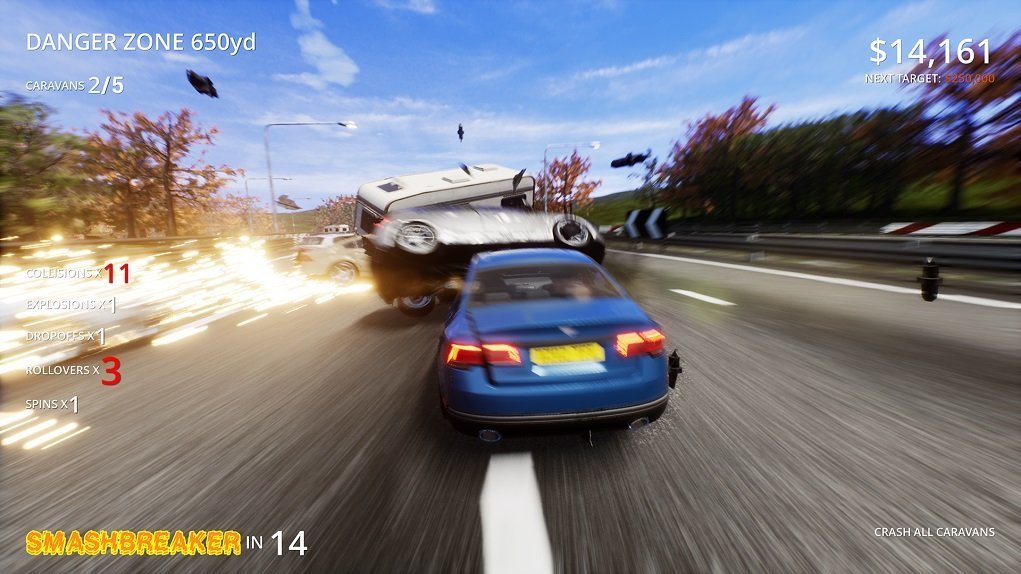 Due to the healthy level of challenge in these levels which are delivered in short bursts you’ll find yourself restarting them over and over again in order to get the best possible score. It’s here where DZ2’s cracks start to show. For a game such as this, loading times between restarts are too long, especially considering the small levels, which kills the momentum of the game. Three Fields could take some inspiration from Red Lynx’s Trials series here.

Further to this, when repeating levels over and over, inconsistencies in vehicle handling and collisions become apparent. Some barriers are perfectly safe to grind against, whereas others — identical in appearance — will kill your car instantly. The above mentioned near misses count towards your total even if you’ve collided with the vehicle and in one instant, a particular car, on a specific level would repeatedly bring my vehicle to a complete stop for no apparent reason. That being said, when it works the physics applied to checked traffic is excellent. Cars bounce off your chassis as if made of rubber and then slide, roll and flip down the road, taking out other vehicles in comedic fashion. 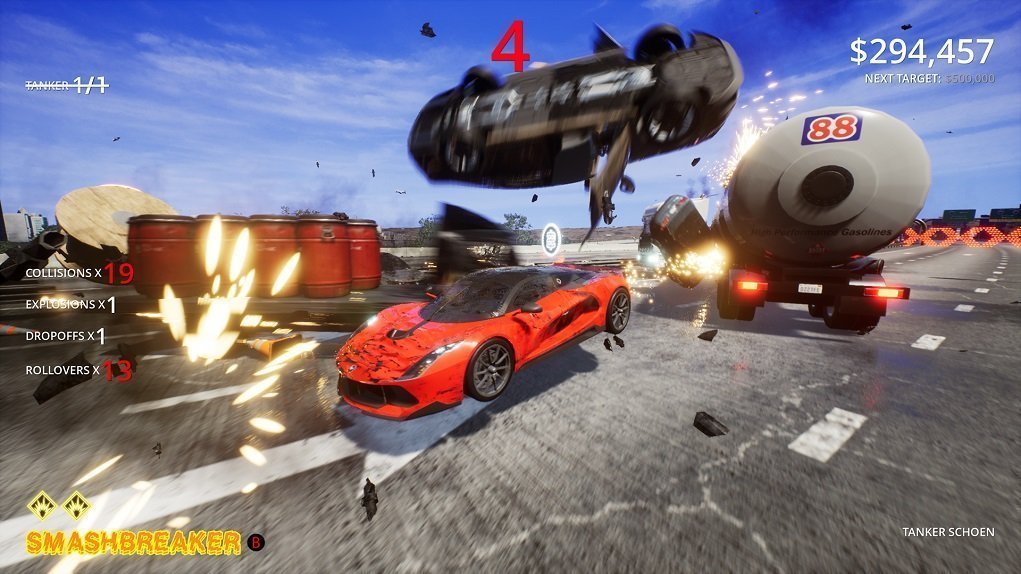 Sometimes these issues result in sheer frustration, especially those that occur on your 10th attempt at a course. But other times they add a little charm to the game, reminding you that this fun little experience was made by only 7 people. Put me in a room with 6 of my mates and at best we’ll make nothing more than a mess.

Danger Zone 2 isn’t quite as much fun as I remember Burnout being. The crashes feel less satisfying and the vehicles don’t handle as well. But this is by no means a bad game. It peaked my interest for a good few hours, scratched my itch for classic Burnout nostalgia and the level titles produced a little internal chuckle thanks to their slight nods to old 80’s rock tunes (the game is literally about a highway to a Danger Zone).

Don’t be surprised if DZ2 establishes a small but committed community of players keen to top the leader-boards or figure out the perfect race line to hold the records for the most destruction. Be less surprised if Three Fields Entertainment does something huge in the years to come.

Danger Zone 2 was reviewed using a promotional code on PS4, as provided by the publisher. Click here to learn more about Stevivor’s scoring scale.