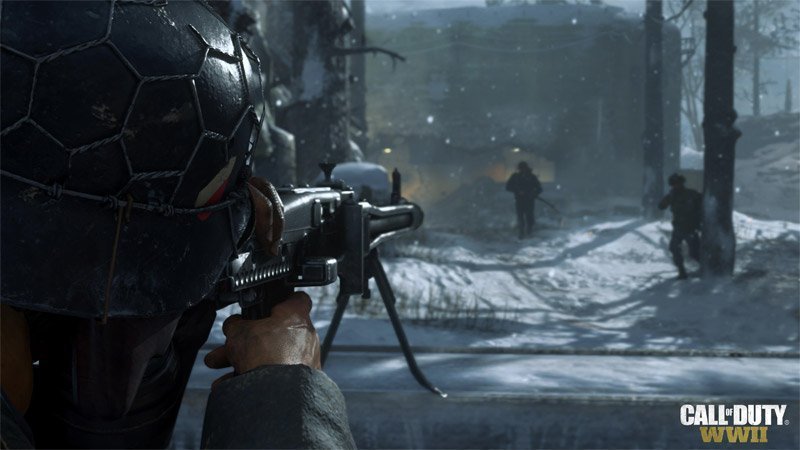 Sledgehammer doesn't reinvent the wheel, but turns it around.

Call of Duty WWII is a return to classic CoD with a modern foundation. Its impactful single-player campaign is a salute to the camaraderie of a war grounded in reality, and a course correction for a series bordering upon becoming a parody of itself. After years of Moonraker, this is Call of Duty‘s Casino Royale. The multiplayer embellishes the supplementary component but otherwise plays a straight bat, while zombies bridges the gap to retain the whimsical side. But it’s the campaign that marks a grand return for Call of Duty, as it once was.

Sledgehammer validated its credentials with an action blockbuster campaign in Advanced Warfare. It was over the top, without crossing the line, and roped together with tight, polished gameplay. WWII proves the developer is also capable of delivering a powerful historic tale, boxed into the confines of reality. Predominately playing as an American soldier, WWII’s campaign creates emotional and memorable characters that are respectful of the true horrors real men and women had to endure.

While there isn’t anything here you haven’t played before – WWII has well and truly been told by Call of Duty, let alone games in general – it’s 6-7 hours of close quarters heat, intertwined with espionage and explosive vehicle sequences. The opening missions could be mistaken for a Call of Duty 2 remaster, such is their commitment to re-establish the call to arms of CoD (there are even some objects straight out of 2005), before it unwraps the somewhat more reserved, but still spectacular near death experiences you expect from Activision’s annual shooter.

There’s a renewed focus of what it means to fight on the frontlines. You’re no longer a lone super solider, with assistance from a supporting cast that can be called upon to provide first aid kits, grenades, mortar strikes, ammo and the locations of nearby enemies. These are all tied to meters filled by killing enemies and completing heroic events, which entails saving minions from certain death and helping the injured to hide behind rocks. It’s essentially a basic cooldown timer, but it keeps your kill clock ticking, and helps to build a rapport with your allies between the pre-rendered cutscenes.

Combat isn’t as focused on bottlenecks and pushing forward quickly, as is the mantra in other CoD campaigns. While WWII opens with that, the later missions provide some food for thought as you need to pick of the right Nazis to open gaps ahead and complete objectives. Brief stints commanding a tank, jeep and fighter plane reinstate moments of sheer power, and I quite enjoyed the regular stealth segments that reward silent kills and sneaking by unannounced. Rather then reinvent the wheel, Sledgehammer has spun it around and returned to what Call of Duty used to be, with a polished and well executed, although short, campaign.

Multiplayer is both simpler and more convolved with a return to WWII. It reduces the pace to mere mortal speed, and a more restrictive arsenal of weapons and battlefields reaffirms what has always been great about Call of Duty, without the baggage. On the battlefield, CoD: WWII is a reboot that wipes the slate clean, able to free itself from the arms race Infinity Ward, Treyarch and Sledgehammer found themselves in, all trying to compete, yet unite in the same space. Sledgehammer has managed to free itself from the internal battle by going full circle, and the core mechanics are all the better for it.

Everything outside of shooting each other presents the opposite scenario. With more creative freedom comes something of a cluttered debacle, as Sledgehammer follows the Ubisoft school of design and inundates the menus with an abundance of options that overwhelm more than enhance gameplay. Outside of matches, you’re free to wander a populated hub called Headquarters, similar to the Tower in Destiny, where there are plenty of employees to chat with to unlock look and spend real world dollars. As a seasoned Call of Duty player, I felt out of my depth for hours until I eventually gained a working understanding of the mishmash of menus.

The problem isn’t so much with what’s on offer – hardcore players will quickly love it — it’s that it doesn’t suit Call of Duty. I like CoD because it’s simple; it’s a run and gun shooter with basic objectives and easy to follow unlocks. If I want something on a grander scale, I’ll play Battlefield. If I want to grind for loot drops and cosmetic unlocks, I’ll play Destiny; it’s not what I want from CoD. When you actually get into a game, it’s fantastic. It’s just you, a couple of modestly powered guns and a grenade, with reasonable scorestreaks. Call of Duty and screaming “bullsh*t” go hand-in-hand, but it’s no longer because you were killed by a sequence of insanely fast events nobody could possible comprehend. But I don’t need to run around a hub world for 10 minutes after each match.

All the classic modes return, headlined by the popularity of Domination and Team Deathmatch, which welcome the return of a more basic weapon and movement set. The 10 maps set across different European fronts provide a strong mix of layouts to cater the familiar range of modes, and for the first time in years, I actually like all of them (so far).

The big newcomer is War, an objective-based mode similar to Battlefield 1’s Rush. It has you either attack or defend, as one team looks to take control of a map in stages, pushing the other back. It’s fitting for World War II, but also for a more controlled Call of Duty, which needed a more considered and tactical mode to match the reduction in speed and unrelenting chaos. Whereas I might as well glue down the sprint button in TDM, Domination and Kill Confirmed, War is much more methodical and rewards mid and lone-range players, instead of CoD’s favoured close quarters combat.

While I’ve already voiced my distaste for the loot drops and various currencies, the new backbone of the class system is a real winner. Gone is the “pick x” perks system in favour of classes called Divisions. You choose from Call of Duty’s version of assault, soldier, heavy, sniper and shotty specialist (called Infantry, Airborne, Armoured, Mountain and Expeditionary). Each Division has unique perks but they aren’t tied to your weapons, so if it’s just not working for you, you can change from a submachine gun to a rifle mid-match without changing class.

A couple of days after launch, I haven’t had any issues with lag or finding a match on PlayStation 4. However, perhaps due to wanting to send you to the hub, there is a strange delay after each match, before all the loot drops happen. It seems the clutter has slowed down matchmaking and sanded away a layer of polish from the post game report.

The third pillar returns with Nazi zombies, nine years since we last saw them in World War II with 2008’s World at War. The co-op horde mode has well and truly entrenched itself as a critical component of Call of Duty and is more survival focused this year, in contrast to Infinite Warfare’s spotlight on celebrity cameos. For those players addicted to the team-based mode, Zombies does just enough each time to keep you coming back for more, but is still easily ignored if you don’t have a reliable squad.

It’s clear that Activision is trying to borrow from Destiny to expand Call of Duty, without changing the core gameplay. That’s not the right way to go, but fortunately Sledgehammer nails the return to World War II where it counts. It has a measure but well crafted campaign, compelling zombies and rebooted, yet familiar multiplayer. There’s no denying it’s safe across the board, but that safe mix of new meets old is what makes WWII a great Call of Duty game.

Call of Duty: WWII was reviewed using a promotional code on PlayStation 4, as provided by the publisher. Click here to learn more about Stevivor’s scoring scale.