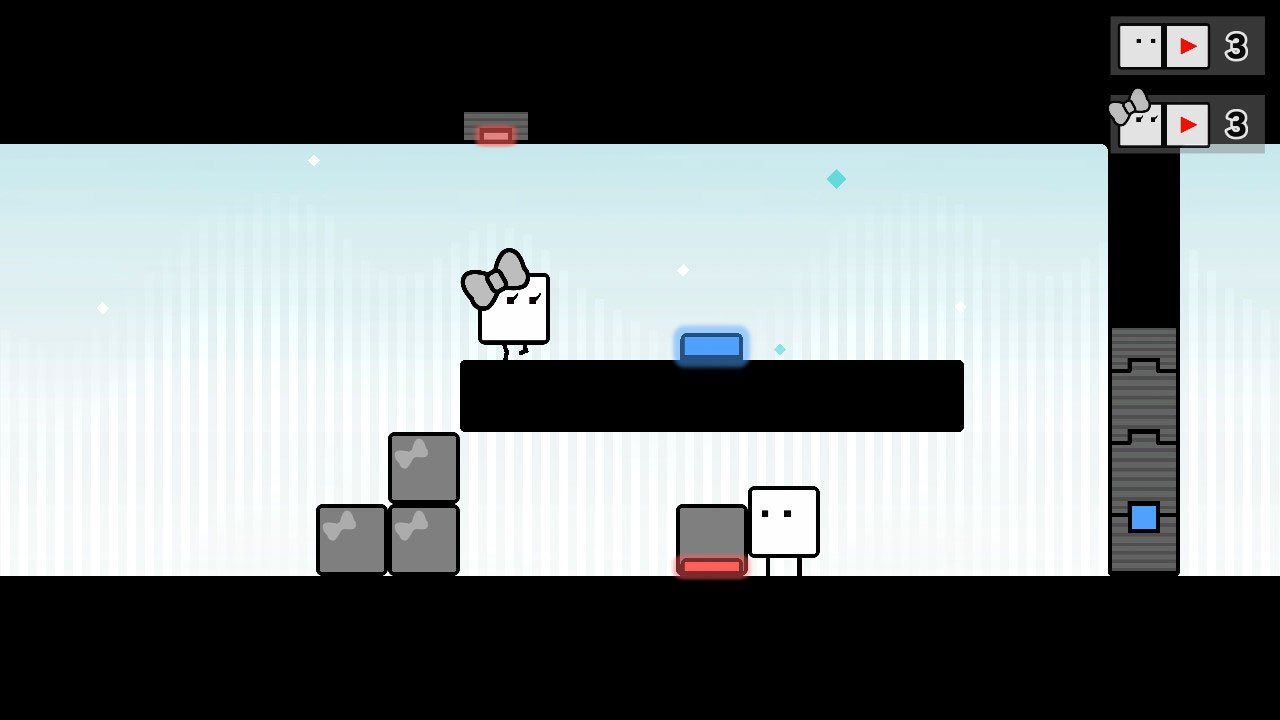 Or should that be 'three times the fun'?

Thank goodness I didn’t have to dig out my 3DS from storage… BoxBoy is back, and this time he’s hit the big time on Switch with BoxBoy + BoxGirl.

The fourth title in the popular BoxBoy puzzle series continues to up the ante, offering more splashes of colour than ever before alongside the introduction of new modes. In addition to standard fare, in which a single player can take control of Qbby or Qucy — the titular BoxBoy and BoxGirl — said single player can tackle levels controlling both characters, switching from one to the other. A single player can take control of Qbby’s taller brother Qudy across even more levels after the main campaign is completed. Finally, two players can also control Qbby and Qucy in co-op action. The three different modes present over 270 levels to engage with.

Those who’ve skipped the BoxBoy series will have no difficulty getting into this Switch release — as in past games, players are very much eased into the world, with various cube-based powers gradually (and expertly) introduced as you progress. Our cubed heroes have the power to replicate themselves; the number of boxes you’re able to chain together varies per level. Your character can remain connected through a chain, pulling him or herself along it to reach distant locations. You’ll eventually be able to kick box structures across a level, or use others to safely bounce around and avoid lasers and spikes.

Really, the only gripe I have with BoxBoy and BoxGirl’s levels is that it starts off (Nintendo-style) quite slow; a veteran of the series, I wanted to basically begin in intermediate difficulty affairs. Still, if completionists want to truly complete a level, things get difficult and quick — you’re assessed based on the collection of optional crowns and a set limit of boxes used to fully complete each. Later difficulties truly require you to think outside the box (pardon the pun), though you can use some of your hard-earned medals to receive hints if you’re truly stuck.

As amiibo support found in Bye-Bye BoxBoy has been removed, those medals are also crucial when it comes to character customisation. BoxBoy and BoxGirl lets players trade medals in for customisation items like eyes, headgear and costumes, but loses points for locking said items behind an RNG-based vending machine. Nevertheless, items are fairly cheap to obtain and you’ll find yourself swimming in gear after completing levels. I was quite proud of my BoxBoy, decked out in kawaii eyes, cat ears and a vampire cape.

Despite the move to Switch, levels are still designed in a handheld console mentality, meaning you’ll be able to get through a level in a couple minutes flat; as such, BoxBoy remains perfectly suited for pick-up, put-down play. Priced at a low, low $15 AUD with bursting with puzzle-based fun, it’s hard to go wrong with BoxBoy and BoxGirl.

BoxBoy and BoxGirl was reviewed using a promotional code on Switch, as provided by the publisher. Click here to learn more about Stevivor’s scoring scale.