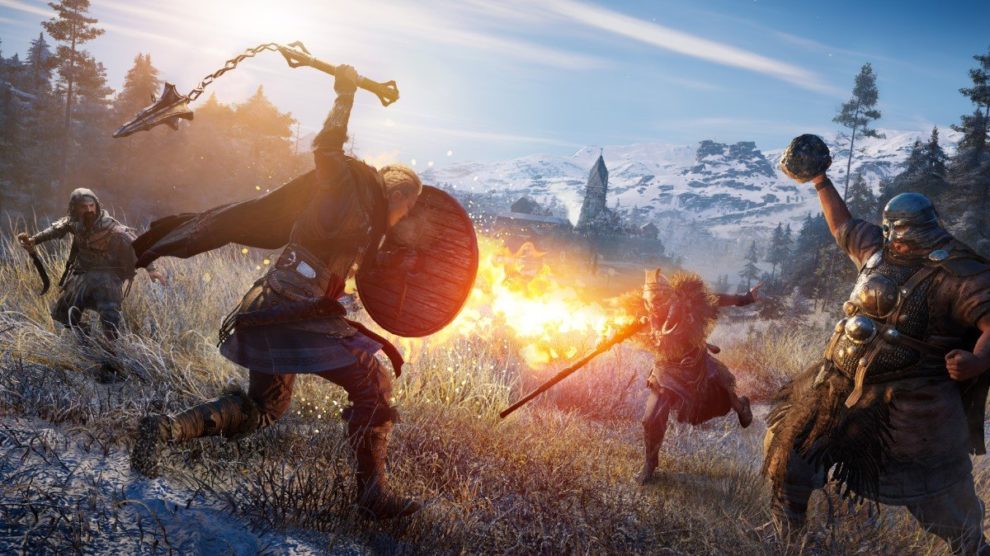 Building on the strong foundations of Origins and Odyssey, Assassin’s Creed Valhalla is in many ways a minor iteration of the proven formula. Yet, it’s also one of the biggest departures in the franchise’s 13-year history. It plays very similarly, but feels very different, with a setting and quest structure that dare to be bold, while gameplay stays safe.

Across core gameplay, Valhalla doesn’t tinker with the strong foundations already working well in the Layla trilogy — and full disclosure, I did have to Google her, as the present day narrative has gone in one ear and straight out the other, ever since Desmond’s demise. Mission objectives remain familiar, the branching dialogue trees are much the same, and the combat system is practically identical — with more brutality fitting of reckless Vikings. 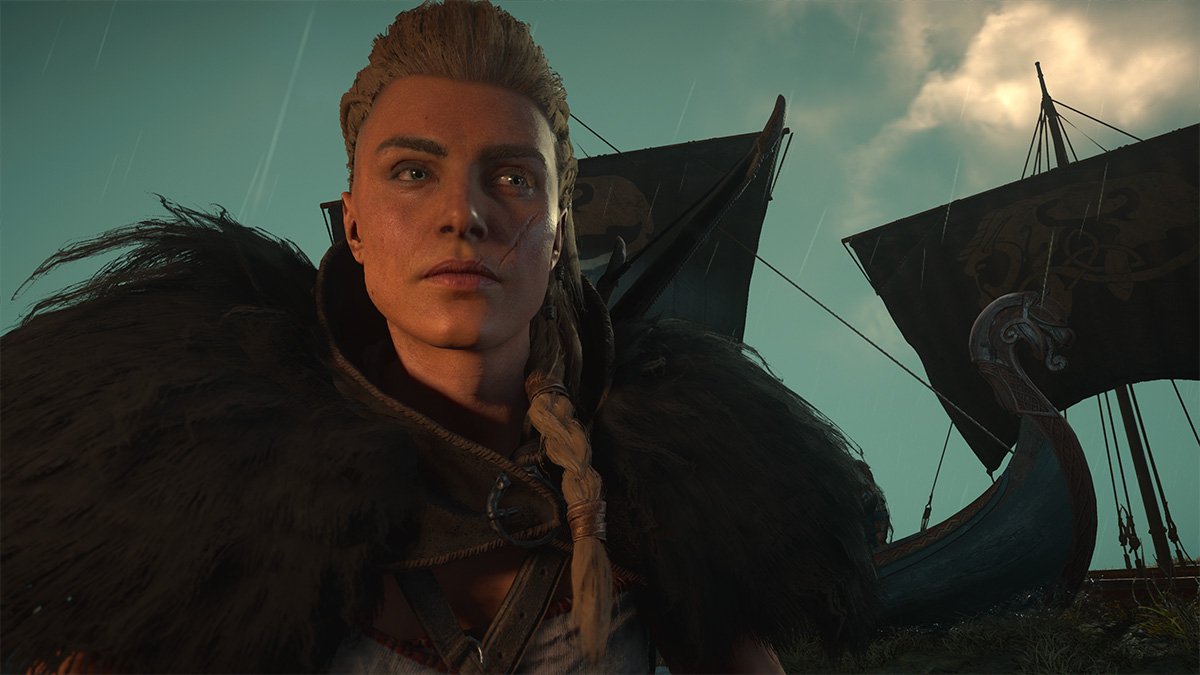 Where it diverts is in narrative and quest structure, which may initially be jarring for returning players, but ultimately makes for a more streamlined and focused campaign. Having devoted myself to Origins, and then slowly meandered through Odyssey, simply due to franchise fatigue, I was weary of the direction Valhalla was headed during its establishing act; it doesn’t really feel like an Assassin’s Creed game at the outset. Rest assured, devoted assassins, once you accept and commit to the new structure, Valhalla opens up and develops into one of the best games in the series.

While the design follows the blueprint of its predecessors, it steps outside the Creed box; advocating an era when Vikings roamed and royalty ruled the lands. Commencing in Norway, but largely taking place in 9th century England. You play as Viking raider Eivor who escapes war in Norway in search of greener (well, certainly less snowy) pastures amongst the Anglo-Saxon Kingdoms of England.

As this is a cobbled together collection of memories from a long dead ancestor, Valhalla offers freedom as to whether Eivor is a male or female character. A third option leaves it up to the Animus, depending on the specific memory, and that seemed like the obvious choice. However, after spending so much of the game as a female Eivor, I felt disconnected suddenly playing as some random dude who vaguely shares a resemblance. 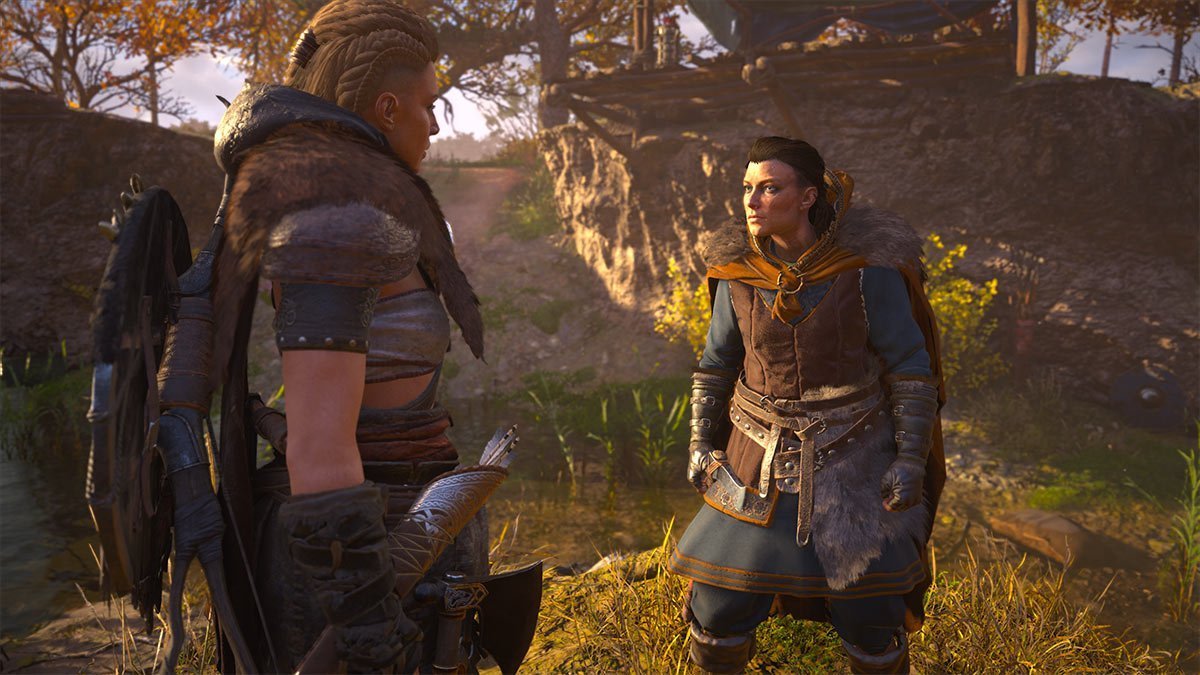 Valhalla is still a game divided into regions gated by player level — in fact they are more important than ever — but it’s no longer a case of venturing to a new location upon reaching the prerequisite power level; then chatting to everyone with a marker atop their head to reluctantly complete side quests to level up. Power level is still crucial in determining successful, but it’s better worked into the storyline and streamlined into a cohesive experience. With a less linear pathway, the power level is merely a rough guide as to where to go next. I never felt compelled to complete side quests of little interest, because Assassin’s Creed Valhalla is one big adventure — there aren’t really side quests.

Except, actually, there are plenty of side quests, but they no longer present like trivial B-sides. There isn’t a clearcut distinction between quests that matter and those meant to kill time. While I’m coming clean, “one big adventure” is a little misleading, as the tale of Eivor is delivered through what amounts to a series of short stories loosely intertwined.

Rather than being split into main or secondary quests, Assassin’s Creed Valhalla is divided into regions of England — as well as Norway and some mythical lands — that deliver their own, relatively contained, story arcs. Each region introduces its own recurring cast, and while the quests still develop across several chapters, this new categorisation makes the quest structure much easier to follow. It’s simpler to comprehend the characters and their motives, and whereas previous games have always carried a sense of wasting time when I haven’t been ticking off main quests, levelling the playing field and affording all story quests the same billing delivers a rewarding sense of freedom. 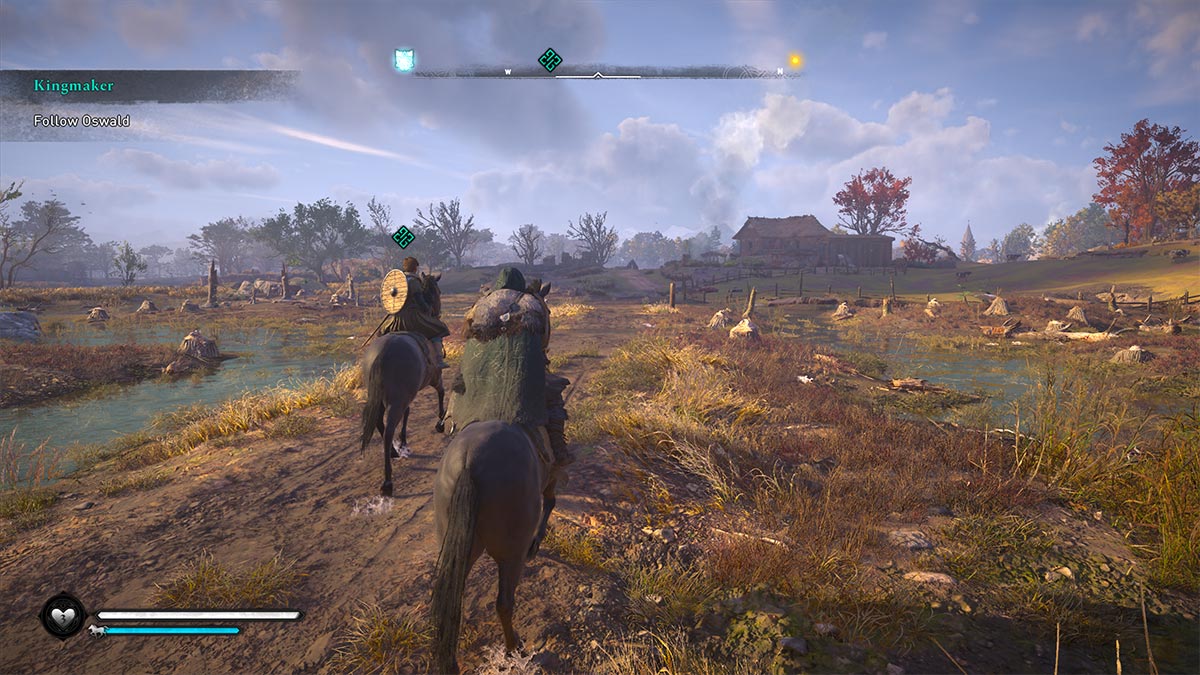 That isn’t the say there aren’t smaller tasks of lesser consequence. To remove the infamous Ubisoft bloat, the map system has been overhauled to display a series of bright dots, rather than inundate you with thousands of overlapping icons. The amount of handholding can be toggled, using the same compass system as previous games to navigate the world. All you can be sure of is that yellow equals loot, white will lead to a collectible, and blue will trigger a world event, which is the closest thing to a normal side quest.

World events are scattered all around the place, and while they can be ignored, they don’t feel like a burden. Run past if you don’t care, and they won’t clog up your quest feed. They’re generally quite short, and often surprisingly humorous. Valhalla is a brutal game in combat, but it carries humour in dialogue, and these spin-off moments push the needle further towards light-hearted shenanigans.

While those can be ignored, Raids, the newcomer, are mandatory. Having recently arrived in England, Eivor and her/his clan is still establishing a settlement, which acts as a central hub that we haven’t really seen before in Assassin’s Creed. To establish more services and expand your clan, Eivor has to raid nearby settlements for supplies. These are very similar to liberating outposts in Far Cry, and just as repetitive. While there are some fantastic raid-style events tied to key missions, these generic ones that only serve to generate loot soon become tiresome. 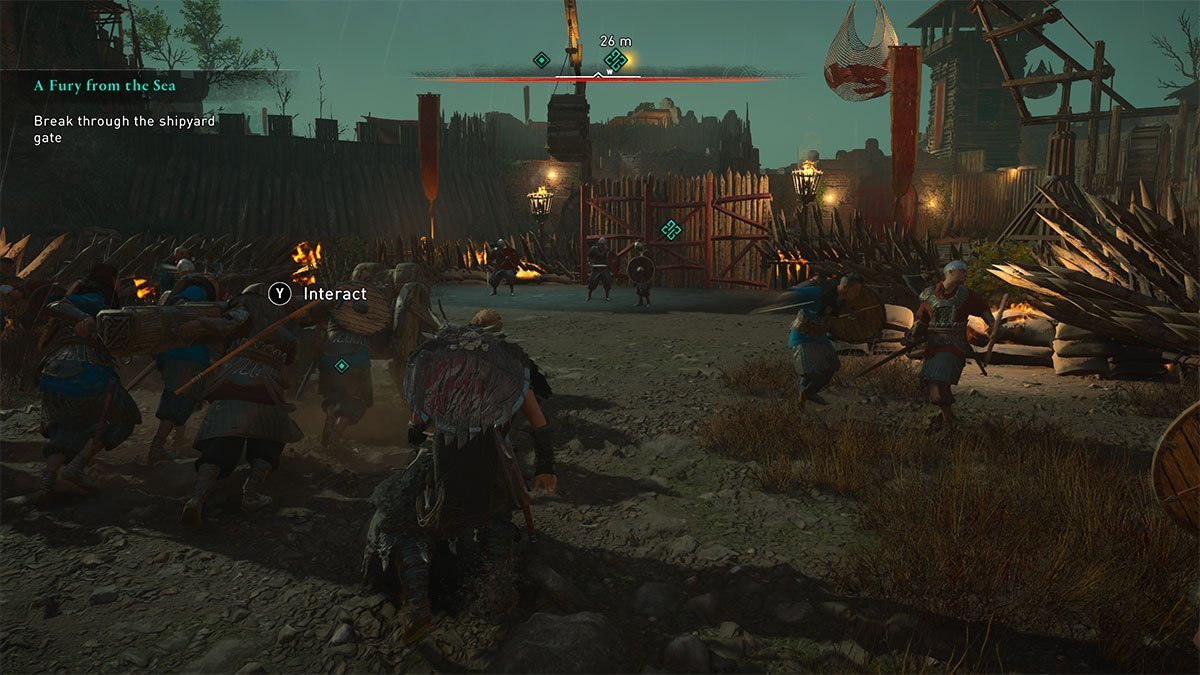 Raiding a not-outpost is aggressive in nature, but they’re deliberately designed to eliminate the possibility to stealth. The chests that house the loot require two people to open, as do the doors often in front of them, and your crew is pretty hopeless at murdering goons; leaving you with all the grunt work. A stealthy option would have been nice — it all goes in his/her satchel anyway, so why can’t I sneak in and out? — but Valhalla is purposefully less assassin-focussed than previous games.

A single mission to join the Hidden Ones indoctrinates Eivor into the legendary league, but she immediately sets the tone by wearing the hidden blade on top of her wrist; it’s a very visible blade. Should she/he stumble across intel hidden throughout England, Eivor will locate members of the Order of Ancients and can track them for a classic assassination. These are monitored separately to the story arcs, and it’s easy to forget about for the first 20 hours or so, but it all ties together when it counts. During her primary mission to assimilate with English Kingdoms, Eivor rarely takes a subtle approach, and prefers to attack with mighty aggression — with the odd assassination.

Combat is essentially the same, but tweaked to allow more aggression. Eivor can dual-wield weapons, and you’re encouraged to experiment and find a suitable combination, but I never discovered anything better than a one-handed axe, shield and hunter bow combo; call me traditional. The skill tree has evolved to resemble constellations, and while it looks daunting, it’s much easier to follow than previous systems, to effectively do the same thing. Skill points come in pairs, and the stars represent a buff to one of several stats, eventually leading to a new ability. 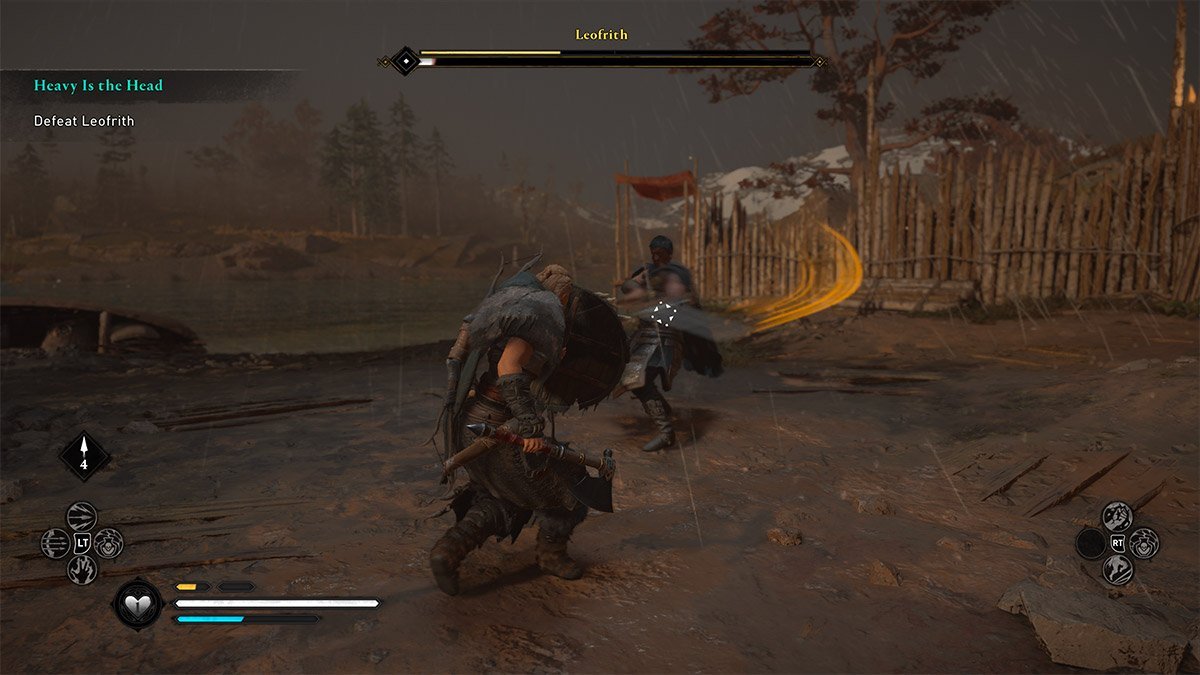 Valhalla looks beyond AC for inspiration, with clear influence in gameplay and style from the likes of God of War, The Witcher 3 and even a little Tomb Raider. The less linear arrangement encourages more backtracking, largely because it’s designed around returning to a central settlement.

It’s taking cues Red Dead Redemption 2 in this regard, which also serves as inspiration for the slower pacing, character development, cinematic horseback riding and even the misleading snowy opening — the dull colour palette in Norway doesn’t do the opening few hours any favours, and it’s unusually dark, to the point where I questioned whether my TV was having HDR issues.

Don’t be rash to judge the aesthetic style, as Valhalla expands into a fantastic looking game when Eivor reaches England (surprisingly the source of much needed brightening up). Character models are similar to Odyssey, but the world, though more subdued, is stunning — with the odd low-res texture strangely out of place. 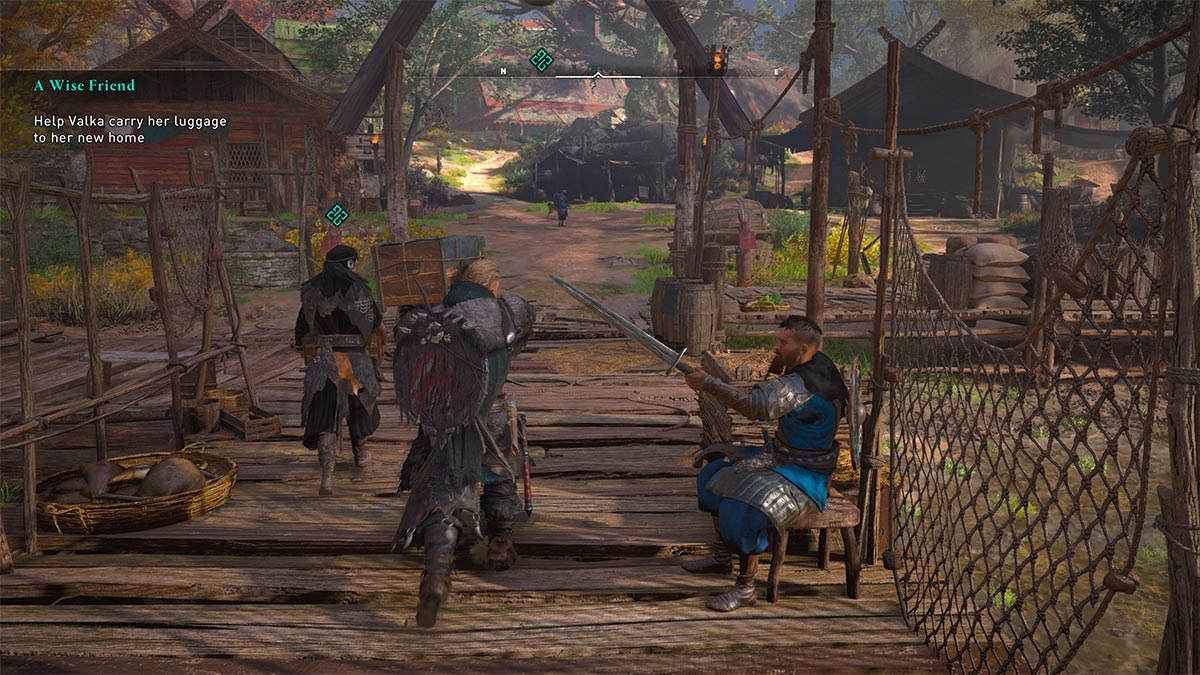 I’ll confess I was unsure about Assassin’s Creed Valhalla at first. It felt strange in the opening hours, but now that’s what I appreciate most from one of the best games in the series. Gameplay remains familiar, but story and structure benefit from a fresh approach. The Viking setting is a perfect match, and allows influence from several other franchises, while the tale of English Kingdoms intertwined with Norse mythology is expertly told. Like Origins, Valhalla benefits from a year off with a fresh audience. It doesn’t reboot this time, but instead improves upon the duo it’s following, introducing proven elements from some of the best in the business.