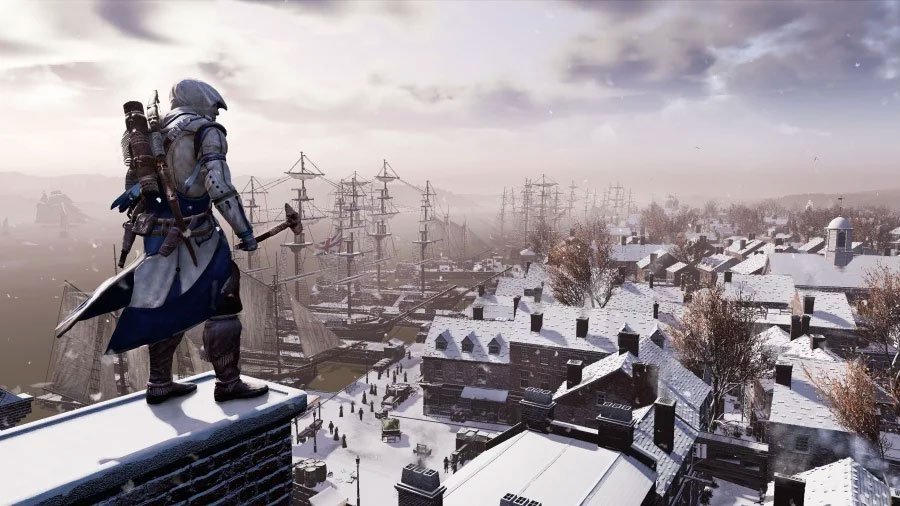 Assassin’s Creed 3 is nothing short of divisive, with some applauding the drastic move away from Ezio Auditore da Firenze and Italy and others loathing the stoic Connor Kenway and snow-filled vistas of North America. Regardless, Assassin’s Creed 3 Remastered is available now and provides the chance to once again jump into the Animus and control Ratonhnhaké:ton during the American Revolution.

This remastered affair has pros and cons. Multiplayer has been removed entirely, though the game’s DLC — Benedict Arnold Missions, Hidden Secrets and the Tyranny of King Washington — are all included and incorporated into Achievements and Trophies. Also included in the bundle is an adventure with the franchise’s first playable assassin, Aveline, thanks to Assassin’s Creed 3 Liberation (and its corresponding Achievements and Trophies).

Compared to Ezio’s offerings in the franchise, Assassin’s Creed 3 tried to bring a lot of new functionality into the mix, though with mixed results. While most credit Assassin’s Creed IV: Black Flag for the franchise’s iconic naval battles, they actually appeared first in Assassin’s Creed 3. Connor’s adventures also began, in my mind, a welcome change in traversal mechanics with the ability to scale up and through trees and over rocks — a necessity, considering the general lack of tall buildings in Connor’s neck of the woods.

That’s the good stuff. On the other hand, the game’s biggest misstep comes by starting off with Connor’s father for a ridiculously long period of time. Haytham Kenway is incredibly charismatic, making his son Connor seem rather bland in comparison. Equally as frustrating is Assassin’s Creed 3‘s continuation of the incredibly vague, apocalyptic present-day story revolved around protagonist Demond Miles. While I longed for a proper resolution at the time, I’m still left confused as to what happened in the end and applaud Ubisoft’s current decision to largely leave present-day stuff alone. On the plus side here though, you do get a lovely performance from Star Trek‘s Q himself, John De Lancie.

Assassin’s Creed 3 also added hunting to the mix, borrowing from Red Dead Redemption and stressing just how important the act was for one’s survival (and pocketbook) at the time. While it does make logical sense, the act of hunting is more frustrating than enjoyable, with those improved (yet still borked) traversal mechanics making a rabbit almost impossible to catch at times.

In terms of next-gen improvements, Remastered now allows Connor the ability to aim ranged weapons freely, as in Black Flag and Rogue Remastered. The release also makes use of physics-based lighting and native 4K resolution scaling on supported platforms. All considered, we’re basically sticking with the same review score we gave Assassin’s Creed 3 back in 2012. It’s a good game with equal parts brilliance and head-scratching stupidity, though definitely fun to muck around in. We’d recommend this only to those who have access as part of Assassin’s Creed: Odyssey‘s Season Pass; it’s a bit pricey otherwise.

Assassin’s Creed 3 Remastered was reviewed on Xbox One, as provided by the publisher. Click here to learn more about Stevivor’s scoring scale.