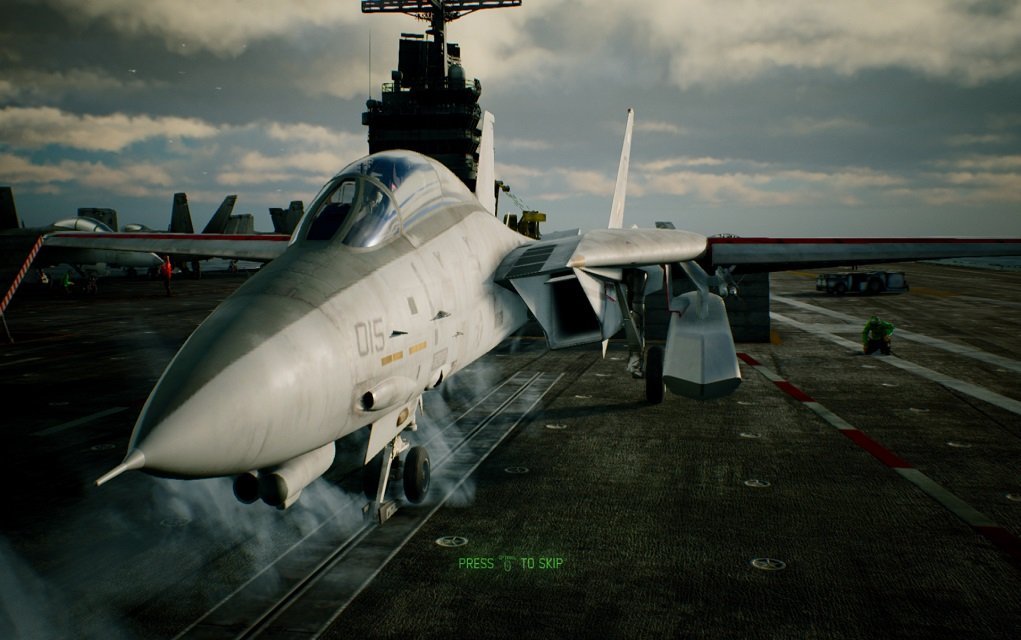 Do you want to get high?

If you were to ask me how I felt about Ace Combat 7 after my first two hours in the cockpit I’d have only one word for you. Vanilla. Which isn’t necessarily a terrible thing. Almost everybody likes vanilla to some extent. But like vanilla is never going to make anybody say “Wow!”, neither is Ace Combat 7 after the first sitting.

But as flight time clocks up more and more, the careful consideration that’s gone into crafting the whopping 20 campaign missions becomes apparent. While the early stages consist of simply taking out all targets in an area or escort or defense missions the primary objective of each mission is rarely repeated. Sure there’s only so much you can do in a fighter jet, shooting things either in the sky or on the ground makes up the bulk of what you’ll be doing.

Within those limitations AC7 offers a largely varied mission structure across all levels. For example one mission has you first destroying as many enemy assets in a refinery as you can within a certain time limit justified by an incoming sand storm. Once that task is complete when the sandstorm hits the enemy uses it as cover for their escape in trucks loaded with what precious little fuel they have. With near zero visibility you’re then tasked with tracking down each of the trucks before their escape thus throttling the enemies primary fuel supply.

The same unfortunately can’t be said for the multiplayer component which consists of only two game modes, Team Deathmatch and the misleadingly titled (and misspelt) “Battle Royal” which is just your typical free-for-all. While there’s some customisation options for lobbies, the game play consists of nothing more than jets flying around and around in circles trying to avoid each others missiles until a player has momentary lapse in concentration and gets hit by one of the many missiles flying through the sky. Sadly in a month nobody will be playing the AC7 multiplayer, but many will still be working their way through the campaign which is much more enjoyable.

Much like the other titles in the long established series, the campaign of Skies Unknown is set in the alternative universe of Strangereal (yep that’s the best name they could come up with back in 1995 and nobody’s thought to change it) and the early stages of a war between the nations of Erusea and Osea. You play as a pilot, call-signed ‘Trigger’ who quickly finds himself imprisoned after being accused and charged with the assassination of the former president during a mission. Though rather than going to an actual prison, Trigger is locked up on a fake military air base laden with inflatable trucks, a painted on runway and barely operational planes which acts as a decoy for the real army assets. Eventually you, as a dishonorably discharged pilot, and a prisoner convicted of an assassination, are given free access to a fighter jet to assist in the war efforts, primarily assigned to near suicidal missions, under the assumption that as soon as you get into the cockpit you won’t just leg it the fuck out of there.

Further to this, a subplot follows the story of another pilot, Avril, who with the help of her now dead father and his old war buddies has managed to learn the intricacies of aviation engineering by her mid-to-late 20s through the building a single high performance fighter jet out of spare parts.

It’s at this point of the campaign that things get so absurd that you simply stop caring about the plot entirely. Though despite the weird looking character models and B-grade voice acting the cut scenes are still worth watching for the cinematography which is straight out of a certain Tom Cruise movie.

Visuals in-game are hit and miss. While flying high up in the sky the sunlight peeking over the horizon, illuminating mountains and desert plateaus is quite impressive in some maps. Though when dogfighting inevitably brings you close to the ground, which it does very frequently, that magic is lost in dodgy looking object models and low res textures. The same can’t be said for the plane models through. While they’re nowhere near the standard one would expect from the incredible car models we’ve seen in games over the past 12 months, the jets do have a decent level of detail when compared to their real world counterparts which will likely satisfy aviation fanatics enough.

Enemy pilots are challenging to engage and make all sorts of clever maneuvers to avoid your attacks whilst at the same time working to get on your six for that well timed kill shot, while you do the same. In some instances you and an opponent will circle each other a few times though these instances are rare with enemy AI seemingly picking up on this and making a break for it to take another approach if you don’t do it first.

And rather than just looking around randomly for the next enemy unlucky enough to be in your line of sight, using the detailed and very helpful radar you’re able to plan your approach towards catching an enemy by surprise from the rear resulting in either a satisfying kill or the enemy cleverly avoiding your missile lock. Ground targets are of course a different beast entirely with many situated close to the cover of mountains forcing you to plan your approach while trying to avoid their barrage of high caliber shells.

Skies Unknown truly shines is when it’s played in PSVR. While it’s likely to make some feel more than a little nauseous as you perform barrel rolls and loops through the big blue, I had no such issues. And the sense of speed achieved in this mode is unmatched to playing on a TV. The ability to easily look up and around you rather than just straight ahead makes such a huge difference to the game play it’s a tragedy that AC7 has only a handful of VR missions, all of which are separated from the primary campaign. Even though the VR levels are severely lacking in the visuals department to the extent that it looks like you’re playing a last gen game, the scale and immersion that VR provides makes this a much more thrilling experience. Why they didn’t make VR an option for the entire campaign is beyond me.

Due to its niche nature, Ace Combat 7: Skies Unknown won’t be for everyone. You’d really need to love this style of game to get the full benefit of it. That being said, it’s a well crafted addition to the genre and may very well make some some new fans of aviation titles that were otherwise not interested. It’s story, and the dialogue used to deliver it, are so silly you’ll be chuckling through to the end but you’ll care little about the characters. The tight and accessible controls, and ever changing mission structure makes for plenty of hours of high speed, high altitude fun. At the normal difficulty setting things became a little too challenging early on in the piece so it might scare some players away before the finale, but it’s worth playing through due to the sense of achievement felt with each successful kill.

Ace Combat 7: Skies Unknown was reviewed using a promotional code on PS4 and PlayStation VR, as provided by the publisher. Click here to learn more about Stevivor’s scoring scale.