I lived my nightmare.

No, not zombies… though they are the creatures of nightmares. You know that falling dream everyone has? For a brief moment, I got far too close to it for comfort. Our squad was tasked with crossing a dangerously unstable makeshift bridge. I courageously held back and protected my team from the endless horde of salivating zombies, allowing them safe passage. As they offered covering fire from across the chasm, I gingerly stepped along the bridge, trying my best to avoid looking down.

Just a few steps into my journey, I hear a titter over my headset and a grenade is launched by a bastard squadmate straight into the structure, which collapses piece by piece to the point I am standing upon. In a split second I contemplate my mortality, staring death in the face as a void opens below me. I watch my body ragdoll to the street below, and remember that this is just a game. With my ghost safely on the right side of the bridge I take a knee to let my heart and nerves settle.

Zero Latency is virtual reality on performance enhancing drugs. Powered by the Oculus Rift, custom Alienware PC’s, over 120 PlayStation Eye cameras and custom built assault rifle peripherals, Zero Latency looks and feels like a futuristic marine training simulation but luckily for us it is being used to train gamers for the inevitable zombie apocalypse rather than young men for war.

Zero Latency is a very physical experience, taking place in a 400m sq warehouse in North Melbourne. Once strapped into a backpack holding the Alienware PC, with the Oculus Rift comfortably over your eyes, staff will place the weighty assault rifle in your hands and direct you to the firing range. You navigate the environment by walking around the warehouse, cameras tracking the movement of your gun and headset and translating it to your character within a team based first person shooter. It won’t take long for you to be stepping around virtual debris, ducking behind cover and blind firing at the approaching horde as you shuffle towards the next checkpoint.

It works so naturally you would think the hardware was purpose built, not a Frankenstein’s monster of virtual reality, motion control and a light gun. The most incredible part of the Zero Latency experience is how quickly the real world environment disappears from your mind. A lack of physical feedback will always remind you that it is just a game but those brief moments that you forget garner honest physical reactions; when a zombie startles you by clawing towards your feet you jump backwards, when you have to cross a thin plank you step one foot tentatively in front of the other. While we wait in eager anticipation for Oculus, Sony, Microsoft, Valve and others to bring their headsets to retail, Zero Latency already makes its competitors’ experiences feel pedestrian. 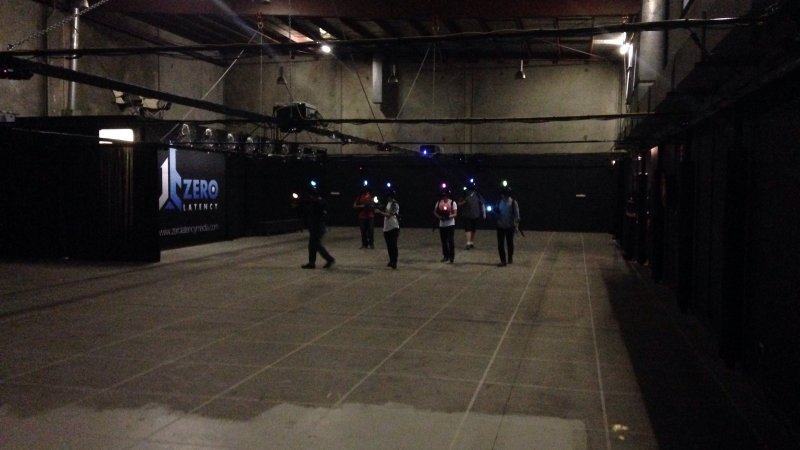 The game itself is built in Unity and sees your squad of six attempt to activate a generator and escape the city. Your gun can switch between three modes; assault rifle, shotgun and sniper rifle, with the latter two requiring bolt action reloading. Ammo is unlimited though reloading requires shifting your grip on the gun peripheral to hit a button, a frantic action when the horde are bearing down on you. You’ll have moments of quiet tension as you stalk dark corridors with only your guns flashlight to guide you, and frantic defensive stands waiting for the apocalypse’s slowest elevators. You will occasionally be split into two squads to achieve individual objectives though teamwork never really extends beyond “cover the flanks” at this early stage. Death is barely an obstacle (you respawn instantly as a ghost and have unlimited grenades for a few seconds) but your natural survival instincts work well enough to ensure you don’t abuse these lenient recovery systems.

Zero Latency does an excellent job hiding its seams. The level design masks real world walls, with regular checkpoints used to turn your group around in the physical space. Should you get too close to a real wall or another player a warning will sound, continue towards danger and the action will pause until you move clear. The physical location of players in the warehouse space is accurately represented by their player models and an overlay appears when you get close to another player to help avoid collisions. Though arms and legs aren’t tracked individually (so you can’t say, kick a box as you walk by) you can crouch, and fire in any direction, but movement is limited to walking pace with a warning sounding when you move too fast.

I can’t overstate how sound the technology is. It isn’t flawless; we had one instance of the game being paused for a gun to be re-calibrated and you will occasionally see wonky limbs or the inside of your own models head, but it works well enough that you are instantly immersed. So long as you get the correct placement for the Rift to avoid blur then motion sickness isn’t a problem, none of our group suffered it in game though the wobble effect you experience when running into an in game wall meant I kept a safe distance whenever I could.

The current game experience is varied and interesting but the potential for Zero Latency is breathtaking. Right now the game feels like it is in “beginner mode”, designed to get you comfortable with the idea and prove the technology works. As retail hardware improves and the software is refined the game could easily shift from experience to challenge, from cooperative to competitive. Some of the ideas already floated by the team include heat lamps, fans and mist sprays, though personally some kind of rumble feedback in the backpack straps to indicate impact would go a long way towards improving immersion (and the chances of having to clean up after the more easily terrified players).

I can’t recommend Zero Latency highly enough. The only concern is what the experience will do to your perception of future virtual reality experiences. You can find more information over at their website.