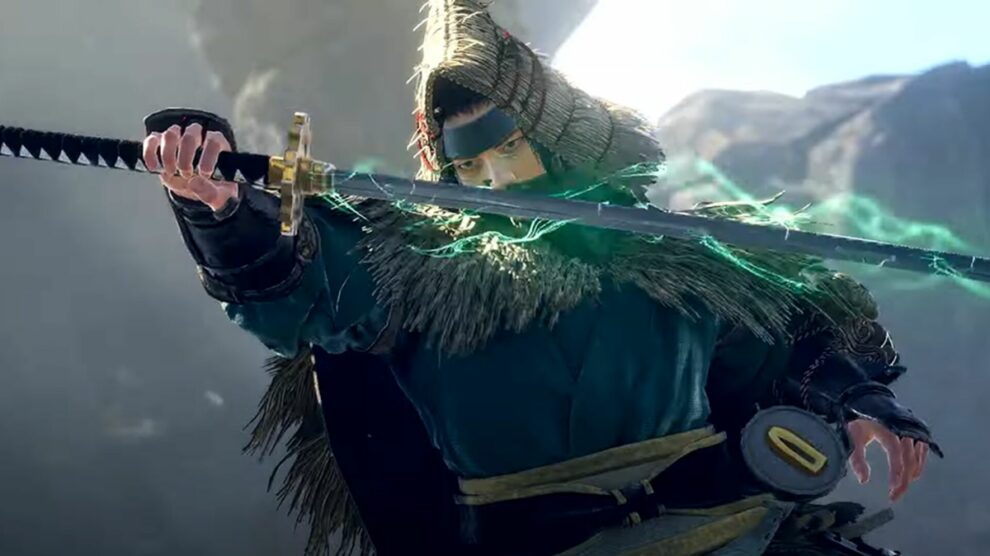 Welcome to Omega Force's take on the hunter action genre.

Much like the fearsome beasts the game revolves around, Wild Hearts has rampaged onto the scene and is steadily picking up momentum.

The title was hinted at by EA Originals and Koei Tecmo in mid-September and since then we’ve had an official announcement and seven minutes of gameplay revealed.

Comparisons to Capcom’s long running and much-loved Monster Hunter franchise are fair and unavoidable, but the development team at Omega Force is hoping Wild Hearts can stand out from this steep competition.

“We want to create a new de facto standard in the hunting-action genre,” he said. Stevivor was lucky enough to get some hands-on time with Wild Hearts as well as attending a press conference with the team at EA Originals.

While there’s some shared DNA with the Monster Hunter titles, Wild Hearts offers some unique elements for a fresh entry in the space. Here’s what we learned. 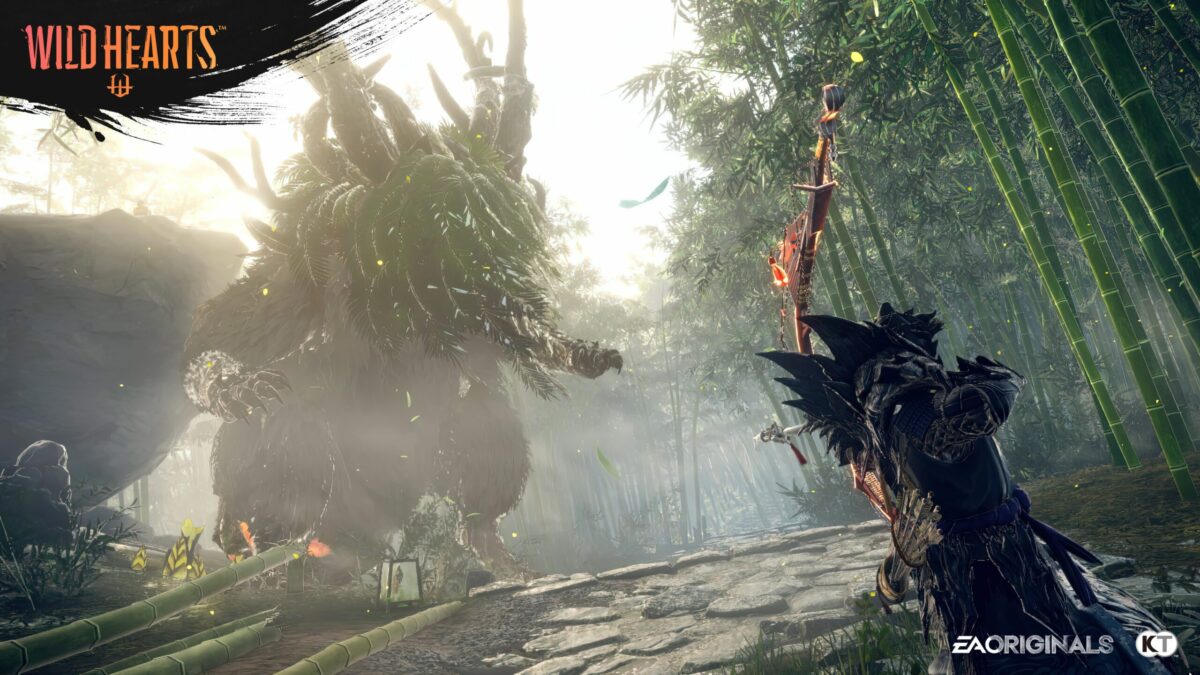 The major thing that sets Wild Hearts aside from other hunting action titles is its ingenious crafting system, Karakuri. It’s an ancient technology that only your hunter can wield and according to EA Originals Executive Producer Lewis Harvey, it’s central to your experience.

“This technology is not only critical to taking the Kemono down, but also traversing and building the world back up,” Harvey said.Our fearless leader Steve Wright – who helmed Stevivor’s hands-on time with the game, which we’ve embedded below – said that options for creation were somewhat limited in the experience’s opening.

He primarily used the crate Karakuri to create elevated platforms for traversal or to launch high damage aerial attacks on his prey; a springboard became available as he progressed.

In fact, new Karakuri like the spring are unlocked by defeating new species of Kemono. From what we’ve seen in the gameplay trailer and some extra footage courtesy of EA, there are heaps of potential options.

“We have basic building blocks like the crates, torches, and the glider that can all be used in different ways on their own, but when comboing them together into more powerful forms, you can create fusion Karakuri,” Harvey said. “These can be learned and built by matching the right combos together and used a devastating effect.”

These powerful fusion Karakuri include things like massive walls that stop a charging Kemono in its tracks, big hammers that inflict stun damage and fireworks that disorient Kemono and knock flying ones to the ground (sound familiar?).

It’s not just weapons of the hunt you’ll be crafting with Karakuri though, there’s a heap of utility-focused Karakuri that cut down on some of the monotony the genre is known for. You can craft nifty little contraptions in gathering spots that will automatically collect things like fish, plants and minerals used in traditional crafting systems.

“Players can build things like camps, campfires or a blacksmith table so they can access crafting while they’re out in the world. There’s also just nice cosmetic Karakuri that we have in the game, like benches or lanterns and things like that,” Harvey said.

Because of this the team at Omega Force made the decision that crafted Karakuri would be permanent fixtures in the open world until they were removed by the player or destroyed by Kemono. This goes for utility, traversal and combat-focused Karakuri according to Harvey. 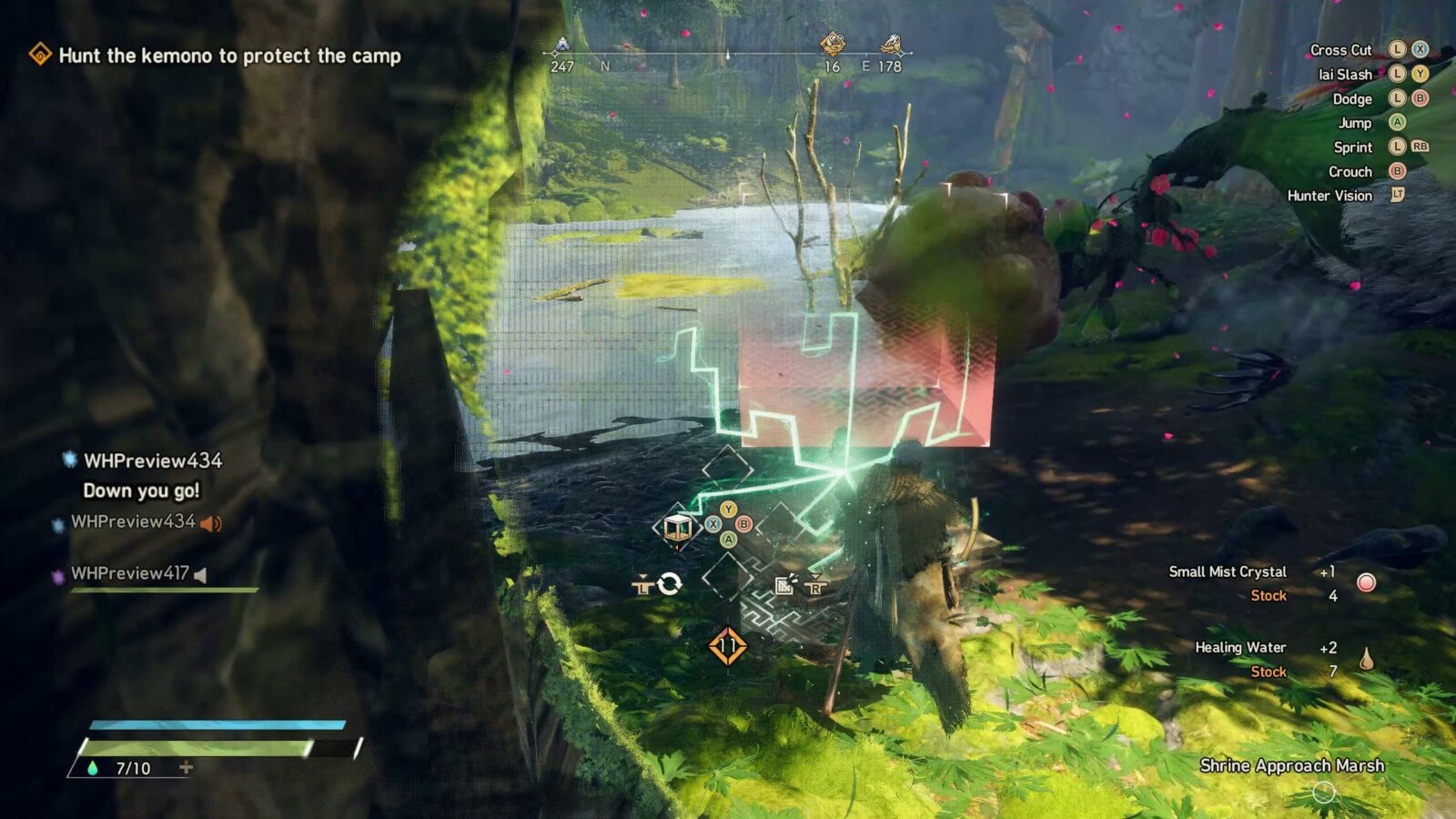 “The Karakuri are persistent in your world and over time you can build ingenious shortcuts and trap zones ready to take on any Kemono or visit other players world and see how they have used Karakuri in unique and different ways to your own,” he said.

Steve found out in his time with the hands-on build that Karakuri are crafted using a resource called Karakuri Thread that is mined from special ore veins that glow green when using your Hunter Vision. These veins were plentiful enough and allowed Steve to build more than enough Karakuri to assist in his hunts. There are also upgrade trees for your Karakuri that make improvements to crafting speed and durability.

According to Harvey, there are a massive number of possibilities for Karakuri usage and even the teams behind the game haven’t been able to count them.

“There’s a huge number of ways to use the Karakuri and honestly, we don’t know all of those because it’s that kind of open and experimental,” he said. “We’re really excited to see how players are going to experiment with this system and come up with incredible combos that I’m sure are going to surprise us.” 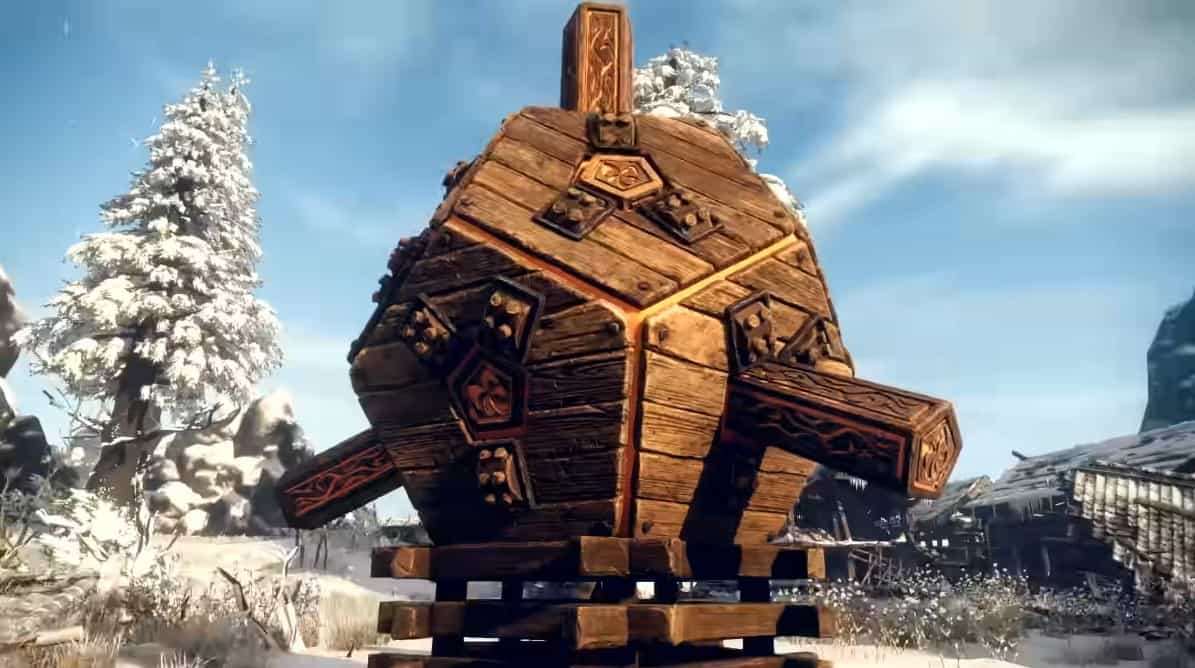 Omega Force has also used the speed at which Wild Hearts is played to set it apart from competitors in the hunting genre. Harvey says this was a deliberate choice to make the game accessible for newcomers.

“This game is designed to be faster-paced and a bit more action RPG-orientated so hopefully players feel a bit more comfortable and at home with the kind of systems and controls that we have for Wild Hearts,” he said.The core of this combat system is the weapons and while there aren’t as many options as other titles in the space, each of them is well-crafted and distinct.

“We’ve got eight completely unique weapons weapon types for Wild Hearts with over 200 variations of those weapons across all of the things that you can craft,” Harvey said.

Steve focused on the Karakuri Katana during his playthrough. It’s a simple all-rounder that builds meter by hitting combos and using Karakuri aerial attacks which are some of the most damaging in the game.

The build included other weapons, all with different focuses and combo systems, though we’re also aware of an additional tool that will be at your disposal. 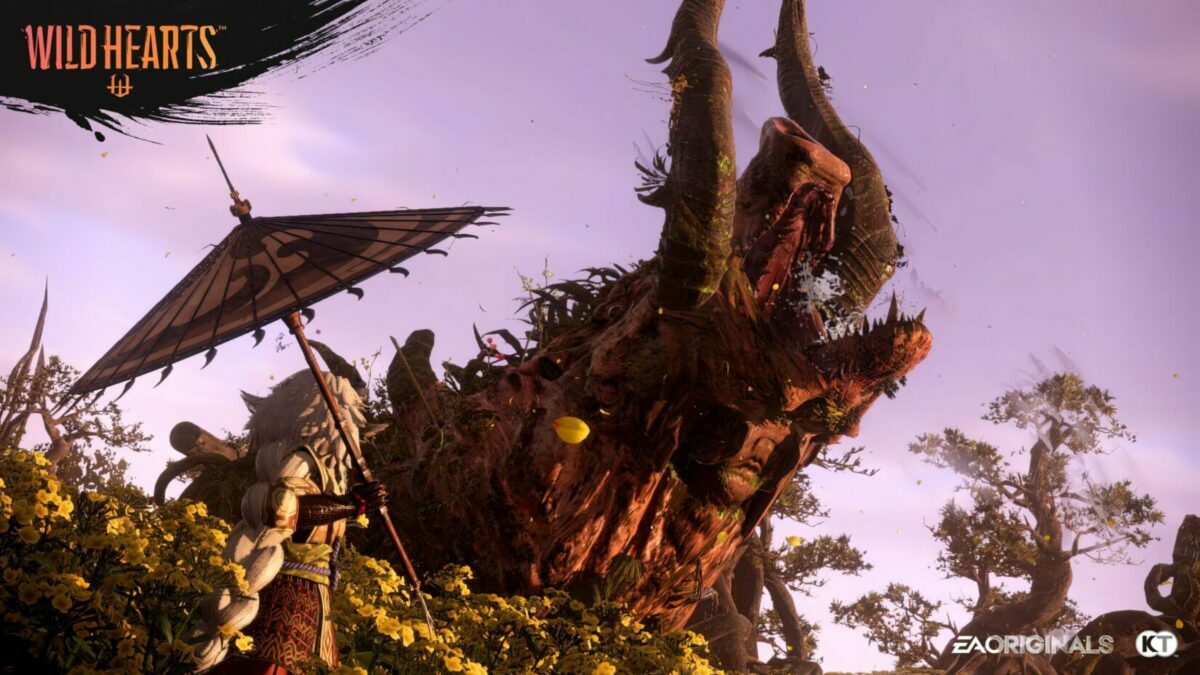 The Wagasa Parasol uses counters to top up an ever-decreasing meter. The more meter you have, the more damage your attacks will do.

The bow allows you to switch between a horizontal and vertical grip, letting the hunter to transition between rapid fire or m focused shots. Arrows shot in the vertical grip will stick into Kemono and deal damage if you can target them precisely.

The Nodachi is a slower bladed weapon that mixes focused strikes, weaker attacks to help shift your position and powerful stamina consuming Iai attacks to finish combos. There are multiple Iai attacks following different combos and special ones that trigger when interacting with different Karakuri.

The final weapon we saw was the Maul which is Wild Hearts’ big blunt stun weapon. It has an extendable hilt that you can trigger with precise inputs in combos. It also has a powerful spinning attack that destroys Karakuri so be careful.

We weren’t able to get our hands on the mighty morphin’ Karakuri Staff shown off in the gameplay trailer but according to the team at EA is has five possible weapon modes.

Anyone who’s played a hunting game before knows that what you wear to protect you from Kemono is just as important as what you pick to hit them with. Luckily, Harvey promised “there’s a huge variety of armor”, and all sorts of options to deck our hunter out. 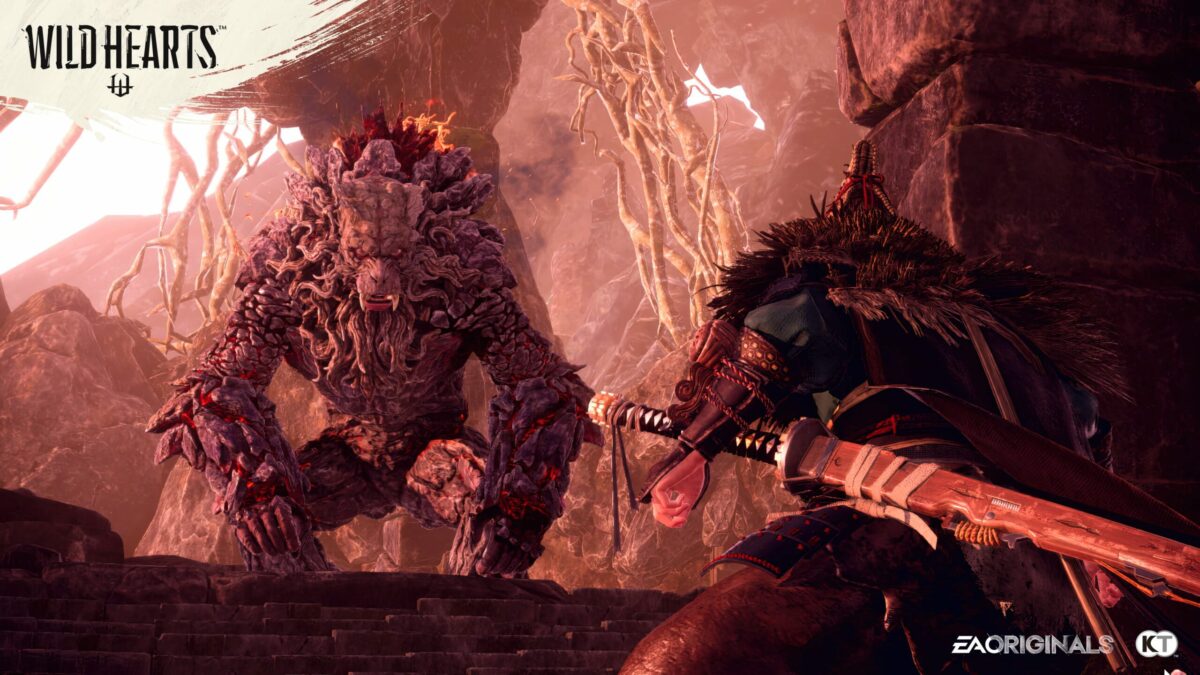 “You can customise your weapons and armor beyond just what they look like when you craft their base state, you can move your armor to look more like a kimono or more of kind of a human interpretation of that armor,” he said. We also feature a transmog system where you can change the appearance of your armor while maintaining the stats that you want.”

You’ll also be able to customise your hunter’s appearance in a fairly robust character creator.

“There is a full character creator system very similar to Koei Tecmo’s previous Nioh series games,” Harvey said. “You can completely customise your hunter at that point and it’s very close to the start of the game.”

Addressing the Gammoth in the room

It’s no secret the Monster Hunter formula works; its the progenitor and undisputed king of hunting action games.

Because they’re the standard by which competitors are judged, fans of the genre usually want to know what parts an upcoming contender emulates and what parts it tries to improve.

Wild Hearts has the benefit of coming into the arena with Monster Hunter at its peak in terms of popularity. There’s never been more discussion about what fans like and what they don’t, and it looks like the teams at Omega Force and EA Originals have been taking notes. 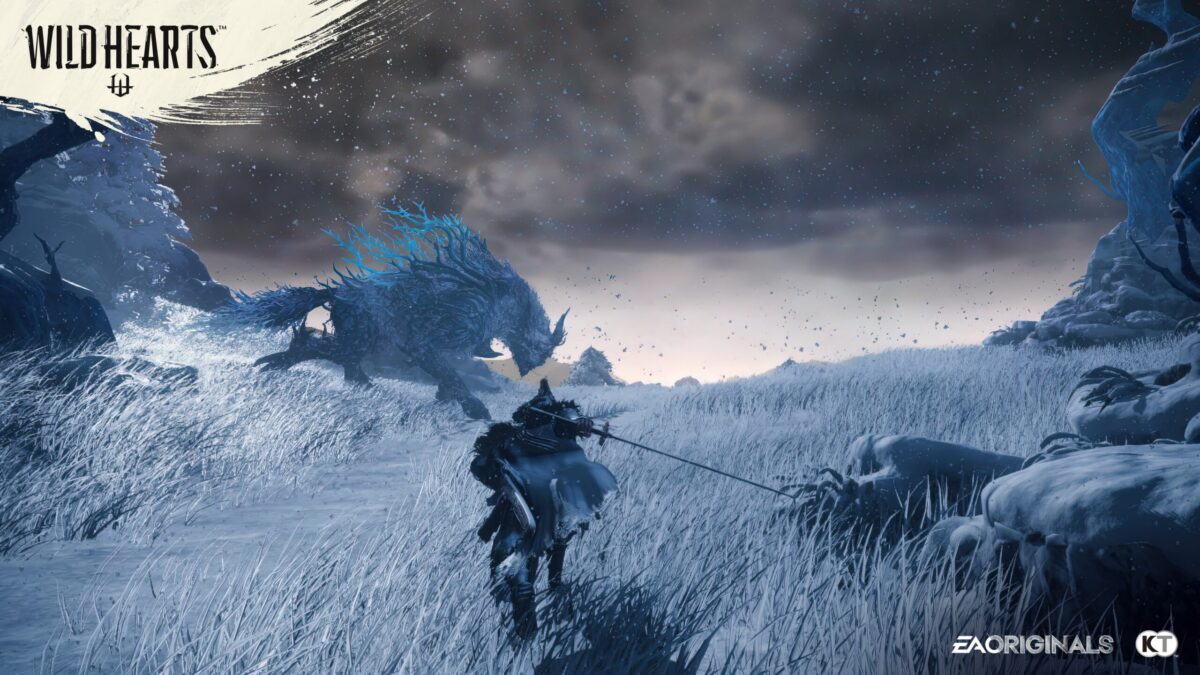 Firstly, and perhaps most importantly, Harvey revealed that Wild Hearts would feature something akin to Monster Hunter’s High Rank and Master Rank tiers for replay value.

“You will definitely be revisiting some of the Kemono that you see earlier in the game, and they will have some significant alterations to them to make them as challenging as they should be for a hunter that is that far into the game,” he said.

There was also mention of “different forms” which may hint at elemental variants, another staple of the Monster Hunter titles.

The team at Omega Force has also focused on removing some of the barriers to multiplayer that plague Monster Hunter.

“There are multiple seamless ways to play multiplayer together in Wild Hearts.” Harvey said. “Friends can party up at camps and play through the entire game together including the story, the cutscenes and the side quests. Absolutely everything can be done together.”

“I think one of the things that we’re really excited about for Wild Hearts is this sense of freedom,” Harvey said. “You don’t need to go to Minato to trigger your next hunt or anything like that. You don’t need to go there to upgrade your weapons or craft new weapons, you can just build a Karakuri workbench and do that wherever.” 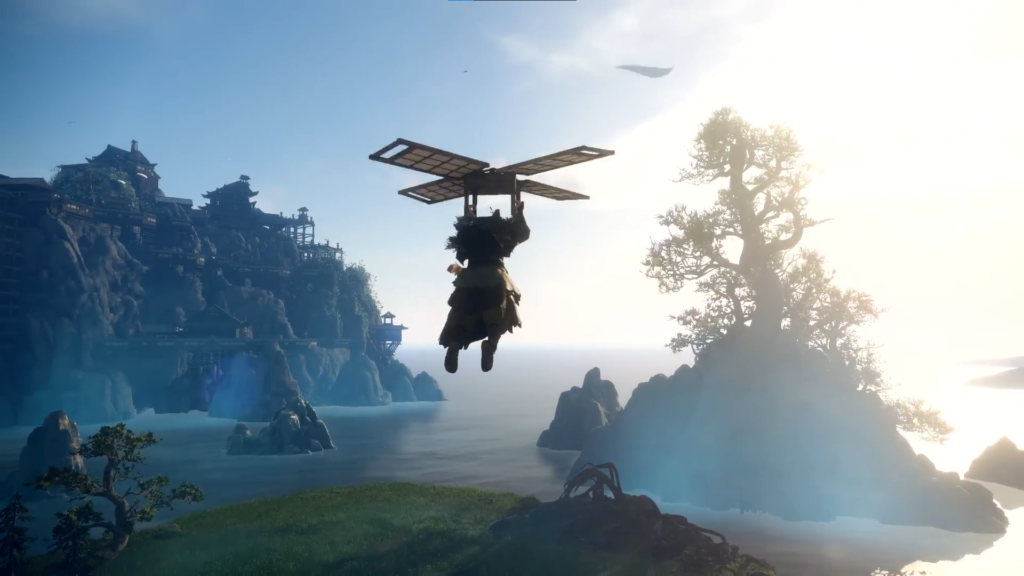 That doesn’t mean you’ll avoid it entirely. A lot of story events and side quests revolve around Minato and there’s a big emphasis on narrative in Wild Hearts.

“There is a great story line here. Narrative is something that Koei Tecmo do really care about and they wanted to tell a great narrative story for Wild Hearts,” Harvey said.

“It takes roughly 30 hours to get through the full story just in one run, without doing too many side activities or exploration,” he said. “But there’s a hell of a lot more content to go through once you get to that point.”

While Ethan Dean wrote 99% of the words you’ve just read, Steve Wright contributed with some hands-on clarifications and the gameplay video embedded above.