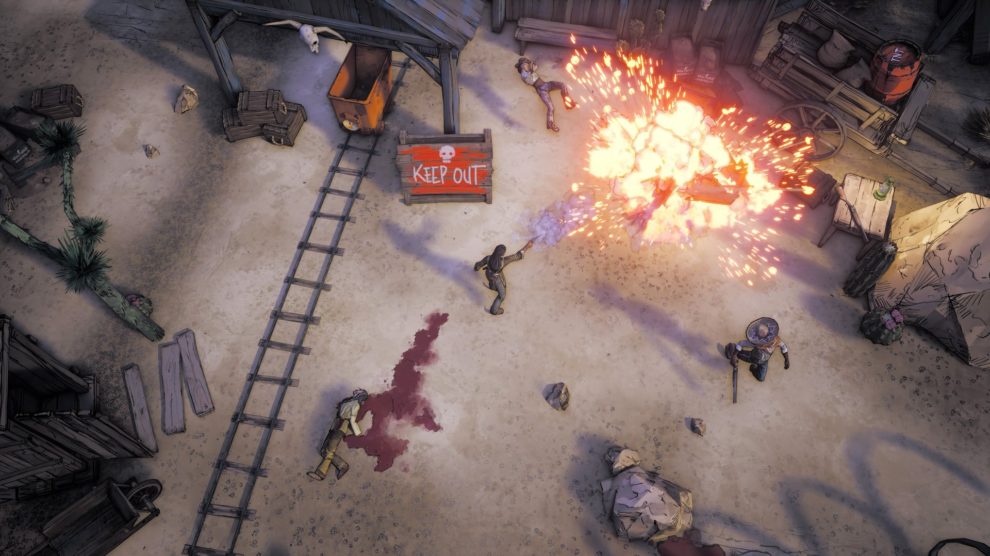 Perhaps the most lasting thing I noticed about Raf Colantonio when I met him years ago on a Prey press junket in Austin was just how passionate and emotive he was about the games he and his team were creating. Watching him detail Weird West, the first title from his new studio WolfEye, I couldn’t help but reflect upon how COVID-19 has changed both development and presentation.

“It would be welcome for you to turn on your camera,” he implored a sleepy group of Australians one early morning (our time), “as this way it would feel [like we were] more in the same room.”

Thankfully, most of the journos in the Discord presentation room obliged (I couldn’t; I sadly don’t have a webcam on my main work PC) and you could see Colantonio feed off of that much-needed energy.

Nonetheless, it’s one thing to present a new game – and your new studio, really – over a webcam and another to bring someone to you and lovingly detail how your project has come to be. It’s equally another to present gameplay over Discord and place your game into the hands of another. I’m still excited about what Weird West can be, but I’m not sure if the hands-off preview event I recently experienced did it any favours.

I’ll admit I was extremely interested when Colantonio described Weird West as “an action RPG set in a dark fantasy wild west,” but, more importantly so, as “an immersive sim”.

“In the way we create the world, we make sure that the world is actually bigger than the game. That it’s very cohesive; that the world exists without the player,” he explained. “It means that the characters that populate this world [have their] own schedules, they have their [own] lives, they have a story; a purpose.”

“If there’s a place — if there’s a house, if there’s any type of building — it also serves a purpose in this world. It has a logic to be here; also, there’s no fake buildings.”

And then Raf and his team took what felt like 20 minutes detailing the physics of the isometric world of Weird West. Watching hands-off gameplay, I followed an on-screen character as she picked up a bucket to gather water to put out a nearby fire… but then saw that randomly-generated rain did just that before the demoist could. With half a coffee under my belt at this point, I admit that I was struggling to engage with what was being shown to me.

Regardless, I don’t think I need to worry – Weird West comes from the aforementioned WolfEye, a 25-person studio that’s distributed around the world; in fact, two of those twenty-five staffers are Australian-based and one of those is a studio co-founder. More importantly, most are former Arkane staff, and all of high pedigree. One was the art director of Prey, another was the lead level designer of Dishonored 1 & 2.

Raf is Raf (enough said) and he co-founded the studio with Julien Roby, the Perth-based executive producer of both Arkane’s Dishonored and Gearbox’s Borderlands. WolfEye’s staff have absolutely proven themselves in the past with action-adventure, RPG and immersive sims alike. While they’ve arguably done all that with more budget in the past, I’d still be surprised if Colantonio, Roby and WolfEye didn’t nail this release as well.

My assumption is backed with the knowledge that WolfEye is taking Weird West seriously, picking a specific aesthetic and design to make it undeniably its own. Colantonio detailed the design process that meant planned shooting systems had to be thrown out the window.

“It’s expected that you would have guns and we did spend a lot of time trying to figure out the right way to aim in this game,” Colantonio said. “It’s actually way more complicated than it seemed at first, because we frankly did not see it coming. In our mind, we were going to go, like, a twin-stick shooter.

“But twin-stick shooters are usually top-down, or if not top-down they’re on one plane anyway, which is not the case for this game. There’s verticality so if you are on top of a roof, for example, you can still aim at things at the bottom [below you].”

Weird West’s isometric nature means you need to be able to do more in order to succeed in your own way, Colantonio continued.

“We did not want to do something simple, like you just aim at the characters only. We also wanted to be able to aim at objects and do things like… as you’re throwing this object in the air, you still can shoot it,” he said.

“This is the kind of design that we always like to invest a lot of time in because even though at first it seems maybe not necessary, I mean at least it’s very expressive. It feels good to be able to shoot at anything you want. But also, it provides for opportunities for emergent tactics.”

That design extends not only into characters themselves, but the way in which you will engage with Weird West’s narrative. Rather than controlling one protagonist, you’ll fill the shoes of a series of hero characters, playing through their stories and potentially enabling them for recruitment by the next hero that you come across.

WolfEye might have spent too many minutes detailing physics in this particular presentation, but you can see its potential nonetheless. Those who need structure can follow Weird West’s storyline, but those who want to forge their own paths can do just that, setting forth and exploring the map, engaging with whatever they find. I’m very keen to get some proper hands-on with it as a result.

Weird West heads to Windows PC, Xbox One and PS4 later this year.